Not again! Britain’s Elise Christie crashes out on the ice

Cursed speed-skater Elise Christie suffered fresh heart-ache tonight after she was stretchered off the ice bloody and bleeding in a high-speed crash in her latest event.

Christie, 27, was trying to put the disaster of her 500m race defeat behind her and was making her way to the finals of the 1,500m race tonight.

But she was spectacularly taken down by Chinese rival Li Jinya who appeared top slice open the Briton’s leg with her razor sharp skates.

Christie, who missed out on the medal from her first race on Tuesday after claiming she was pushed, was given urgent medical attention following this latest disaster. 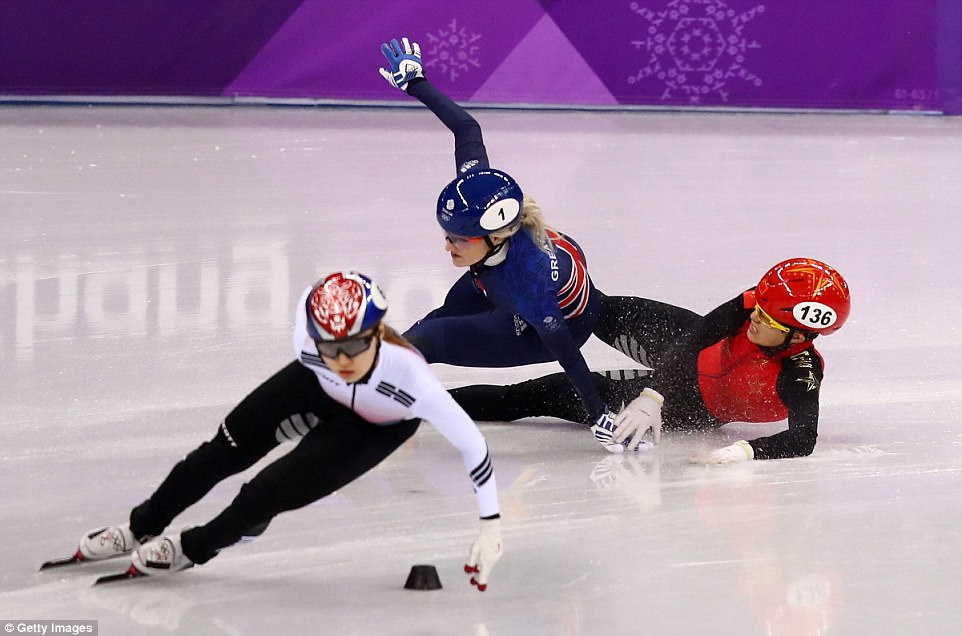 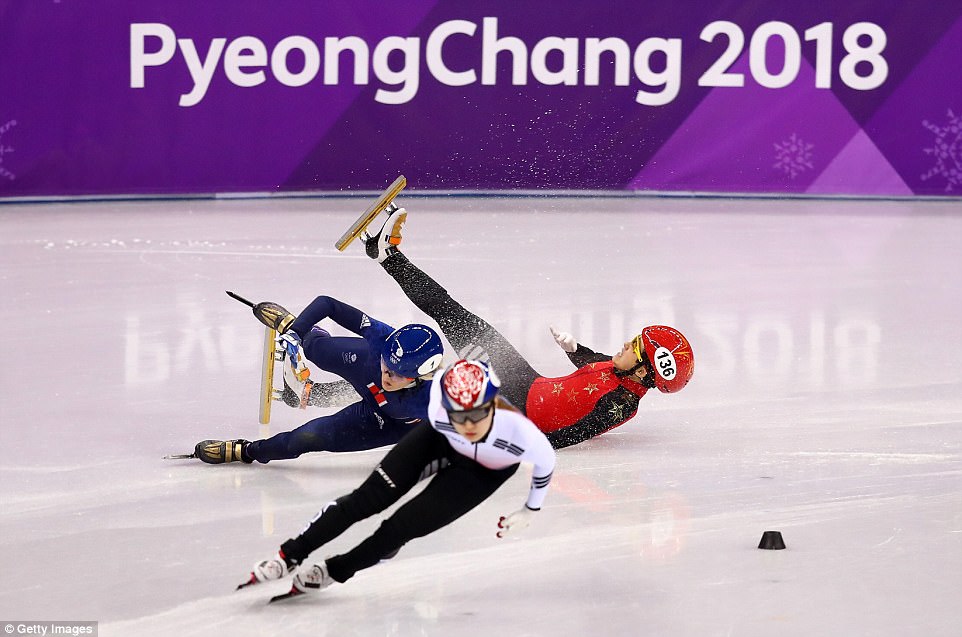 Christie tried to cut through to take second place but took out China’s Li Jinyu and slid into the barriers, where she was tended by medics 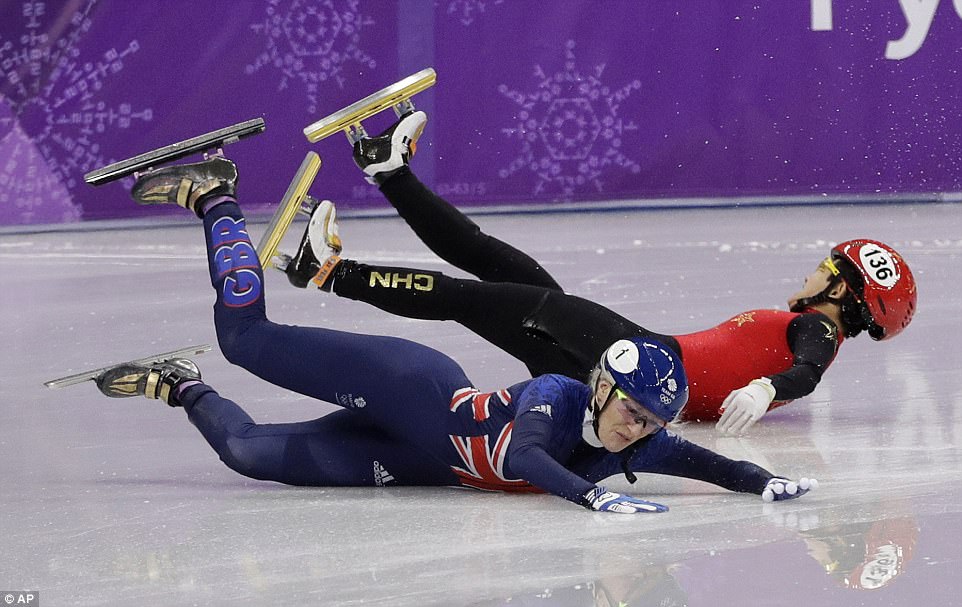 Her teammate, TeamGB skater Sharlotte Gilmartin told of her horror as she watched Christie’s crash unfold.

Gilmartin, who fell in the previous 1500m race, said last night: ‘It was so hard to watch.

‘It was two blades that came at her. I ran back out took at her it looks like it is her foot or ankle.

‘It is an impact thing which has shocked her. It is literally horrendous and I feel for her.

‘I don’t know what the thing was, I’d like to see it in slow motion. It is just unfortunate.’

The World champion went full blast into the side padding after failing to avoid the falling Chinese competitor.

One eye-witness described the crash as like a ‘two-footed football tackle with skates on’.

Medics rushed on to the ice as a stunned silence filled the Gangneug Ice Arena. 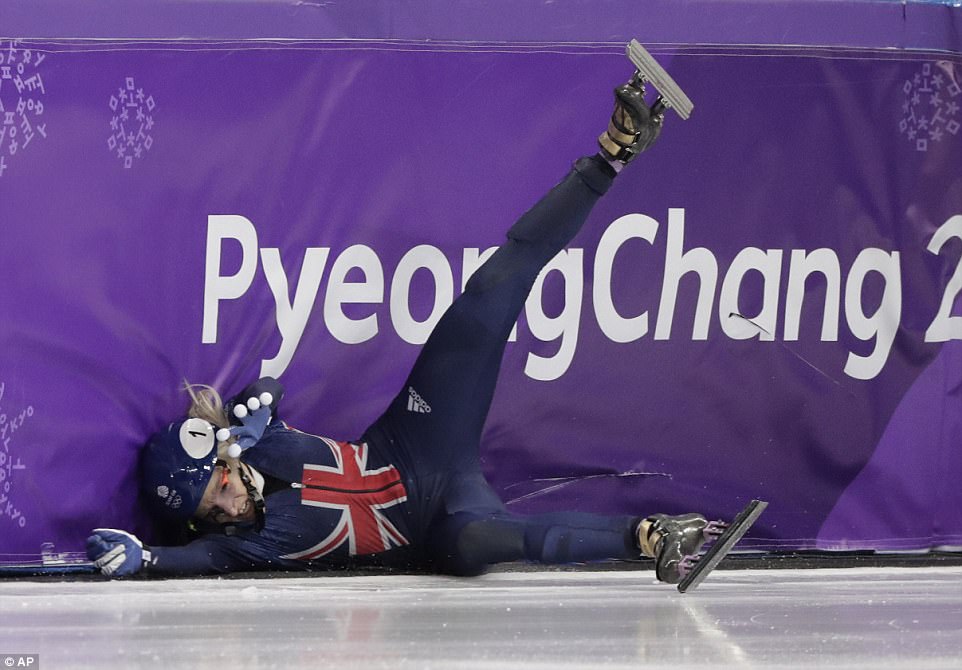 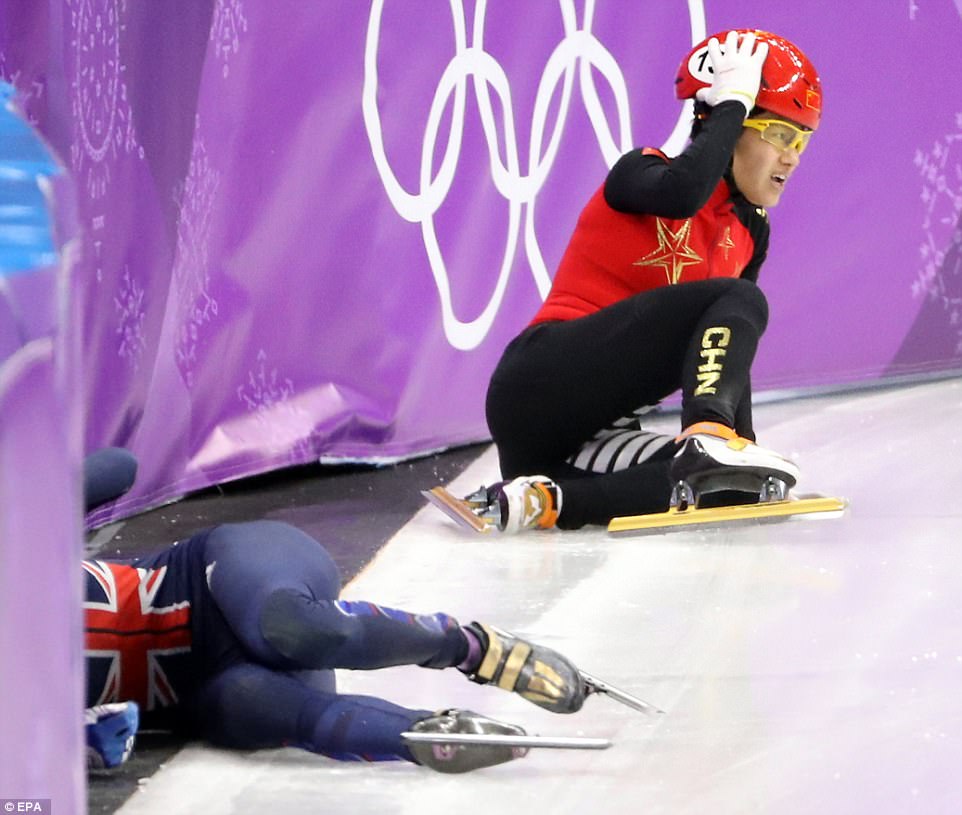 Medics rushed on to the ice as a stunned silence filled the Gangneug Ice Arena. The crowd gave Christie a standing ovation as she was taken from the arena 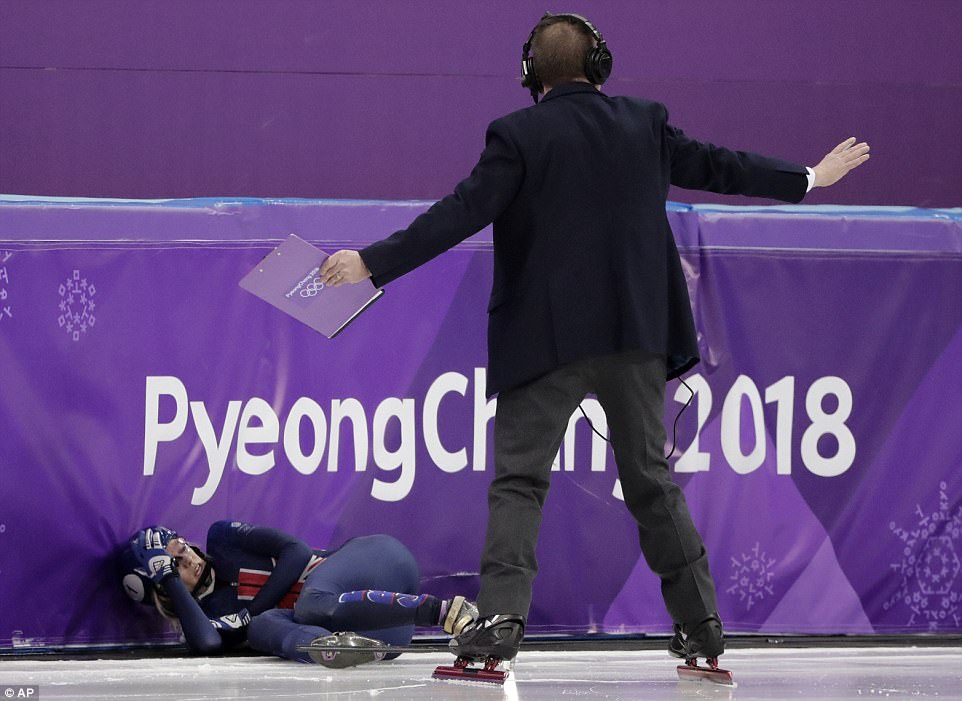 The crowd gave Christie a standing ovation as she was taken from the arena.

Elise was rushed to hospital for treatment and must now set her sights on the 1000m race heats which start in three days time.

Her boyfriend, Hungarian speed skater Shaolin Sandor Liu, watched in horror from the rink-side as the drama erupted.

But the international skater managed to come through his own men’s 1000m semi-final in second place.

Team GB chief Mike Hay said it was too early to say whether Christie would be able to compete in the 1000m race – her best discipline.

He said: ‘She took a heavy fall into the barrier there. 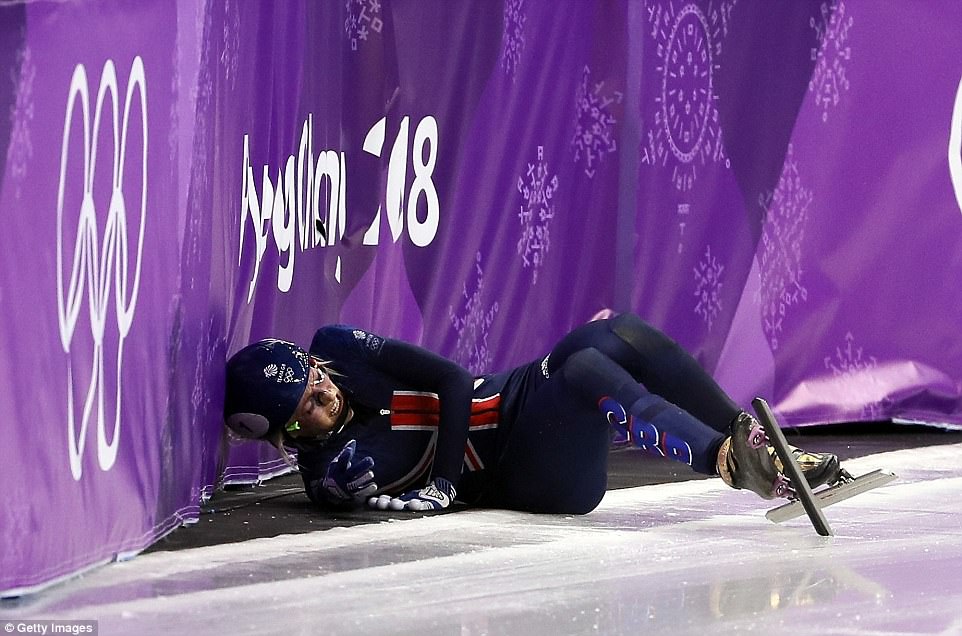 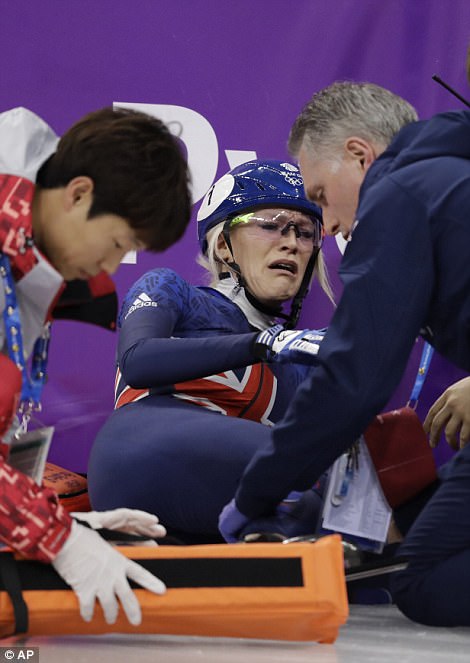 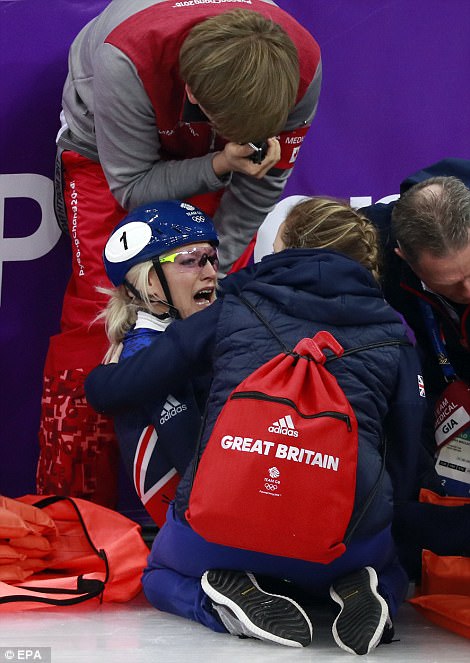 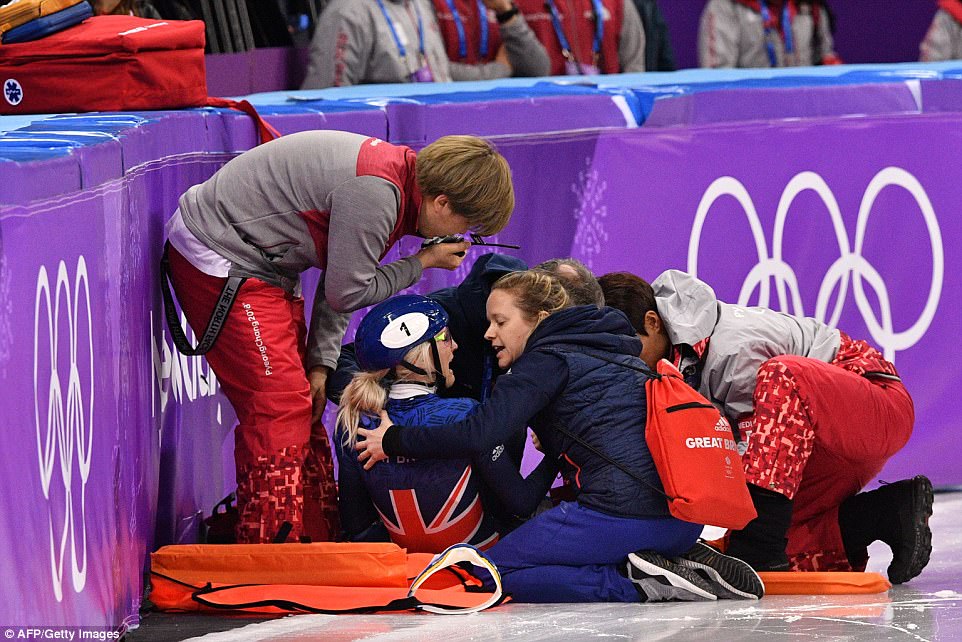 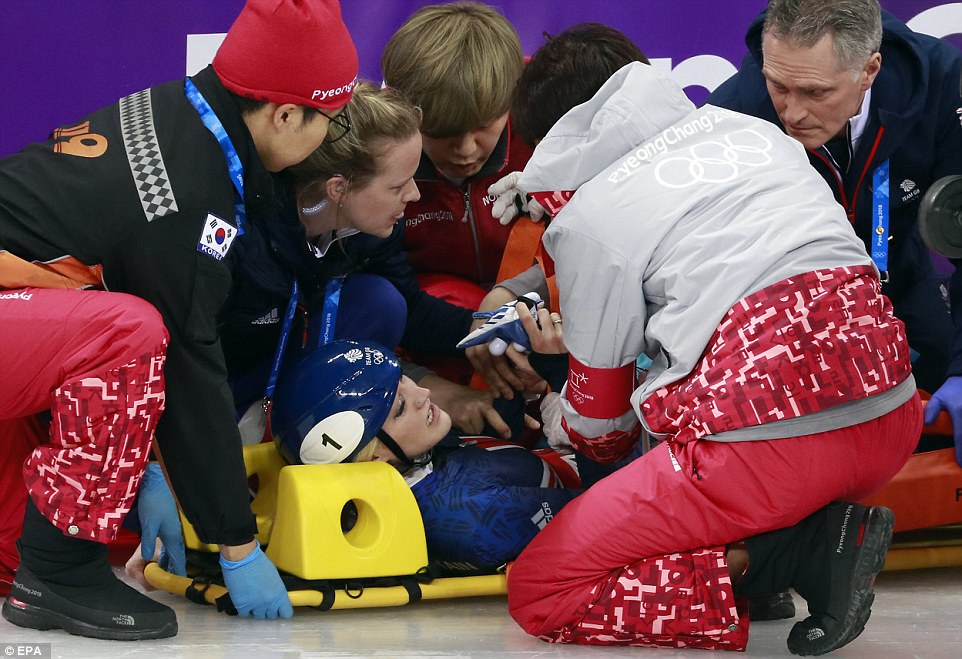 It continues her rotten fortunes at the Winter Olympics, coming after she was disqualified three times at Sochi 2014 and crashed out of her 500m final here on Tuesday 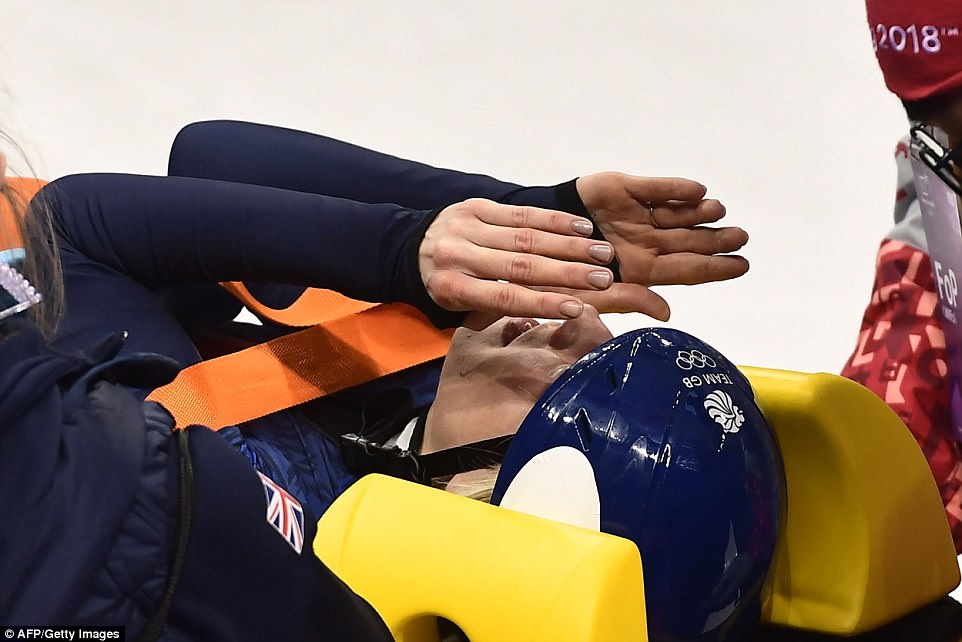 She left the arena in floods of tears after that final and had attempted to play down expectations for this distance, in which she is world champion

‘It is too early to tell (the extent of her injuries). She is going to have some scans. I saw her being carried off. She is with a doctor

‘It is hard to write this. It is tough. Right now it doesn’t matter about the race, it is her health we are concerned about.

‘We hope it is nothing too serious.

Asked if she might also be out of her last event the 1000m, he said it was too early to say before her scans.

He added: ‘She was in a great place.

‘This is incredibly unfortunate.’

Elise Christie was left in despair at the Sochi Olympic Games four years ago after she was disqualified three times.

She knocked over South Korea’s Park Seung-Hi leading her to receive hundreds of death threats from angry Koreans who love speed skating with a passion.