Nothing says ‘UK open for business’ like commandos on the streets

This was not Lockdown II: The Sequel. In some ways it was worse. The measures announced all felt so wretchedly authoritarian, like a call to arms for petty officialdom. So un-Boris.

Yet here he was, sounding as bossy as a bed and breakfast-owning old biddy in Birkenstocks.

No one took any cheer from Boris Johnson’s address to the nation last night.

The Prime Minister sat at a well-polished desk, a single Union Jack flag drooping reassuringly behind him.

Physically he looks in good nick. That jawline is sharper than it has been in decades. Still not quite capable of slicing ripe camembert, but give the guy a break.

‘Covid,’ Boris began ominously, ‘is the single biggest crisis the world has faced in my lifetime…’

We heard how he was calling time on pubs. Chucking-out time would now be 10pm. Wedding numbers would be slashed, the use of face masks expanded.

We were warned of tougher fines, stricter controls, tighter policing.

There was even a mention of the army being mobilised to take some of the burden off the plod. Nice.

Nothing says ‘UK open for business’ better than platoons of camouflaged commandos on the streets brandishing automatic weapons.

It was good day for giant turkeys at least. With numbers limited to six, no need for mum to go ordering any gargantuan- sized gobblers this Christmas. Tiny tiddlers all round. 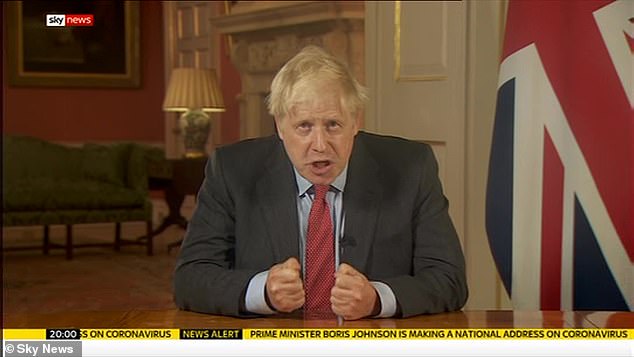 ‘Covid,’ Boris began ominously, ‘is the single biggest crisis the world has faced in my lifetime…’

For those thinking of flouting the rules, Johnson offered food for thought. ‘Your mild cough can be someone else’s death knell,’ he warned, his arms jabbing at the camera like a pair of jousting lances.

It is to the PM’s credit that he avoided coming over like an epaulette-laden Latin American dictator.

Absence of pomposity spares him of that. He spoke of being ‘deeply, spiritually reluctant to make any of these impositions’.

In the same situation, Tony Blair or even David Cameron might have come across a l i t t le too comfor table snatching away our basic freedoms. He ended with a Churchillian flourish which briefly soared.

A throaty whisper promised us ‘great days ahead’. But language-wise, this was a speech free of frills. The seriousness of it all was striking.

The Prime Minister had already announced most of these measures earlier to Parliament.

That will have earned him a brief reprieve with Speaker Sir Lindsay Hoyle, who’s become increasingly ratty about these announcements being made on the telly.

Earlier in the day, Boris’s language was blood-and-thunder, his demeanour oddly chipper. ‘We have reached a perilous turning point,’ he informed the House. ‘This is the moment when we must act…’

To think it was less than two months ago that he stood on that same spot to announce that ‘our long period of hibernation’ was at an end. What a joyous day that was. Not so yesterday.

Sir Keir Starmer announced he was supporting the measures. I think he half-expected the chamber to erupt into applause. His main concern was that the furlough scheme was ending next month. 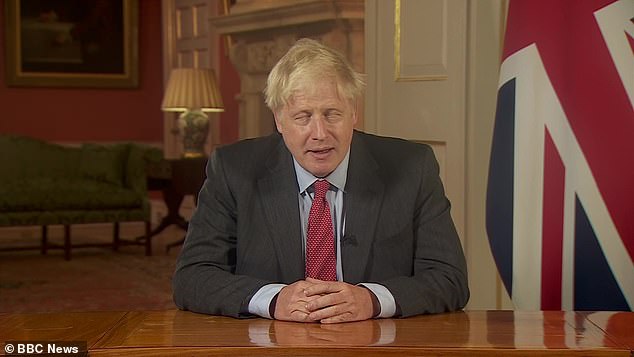 Scrapping it in one fell swoop ‘would be a disaster’, he said.

Other opposition parties jumped on the same issue. The SNP’s Ian Blackford urged the Government ‘not to throw workers on the scrapheap’.

Lib Dem leader Sir Ed Davey made a spectacle of himself, as ever, by trying to get Boris to issue the public an apology.

Last night felt eerily like a teetering point in the Boris Johnson premiership. By imposing such draconian new measures on a freedom-loving public – not to mention adopting such larynx-tightening forceful language – suggests no one realises this more than Boris himself.

Should his leadership begin to crumble over these next months, this will likely be the location on the map his critics mark with an X to signify where it all went drastically wrong.

He has asked the country for another six months of sacrifice. After that, I fear