The world’s two best male players are still refusing to commit to January’s Australian Open after the recent hardline comments made by Melbourne’s State Premier.

Novak Djokovic and Daniil Medvedev both return to action this week at the indoor Paris Masters, with the former surfacing for the first time since the latter beat him at the US Open.

The nine-times Australian Open champion declined to say what his thinking was on defending his title, despite the unequivocal stance of Victoria’s leading politician Daniel Andrews.

He is adamant that nobody will play there unless they are vaccinated, regardless of whether the Canberra government would allow anyone into the country to serve a quarantine period.

While it is not just about Medvedev and Djokovic, they are among the players who have declined to say whether or not they are jabbed. The number of unvaccinated tennis players appears to be shrinking, but still at least 25% are believed to be in that category.

‘I’m going to decide on whether I go or not after I see the official statement from Tennis Australia,’ said the world number one, who hinted that he may not act alone. ‘I’ll see what I personally do with that and also the bigger group of players. Because the situation is obviously different in Australia than in most parts of the world.’

Given how staunchly Andrews has set out his position it would require a huge u-turn from him for the non-vaxxed to be allowed to play, whatever representations TA might be making behind the scenes.

Medvedev, who practised and talked with Djokovic last week, was somewhat cryptic in his response to the same question: ‘I’m willing to play Australia, but I won’t say if you’ll see me there, we’re going to see in January,’ he said. ‘If you’re playing Australia, it’s obvious you are vaccinated. I just keep my medical records to myself.’ 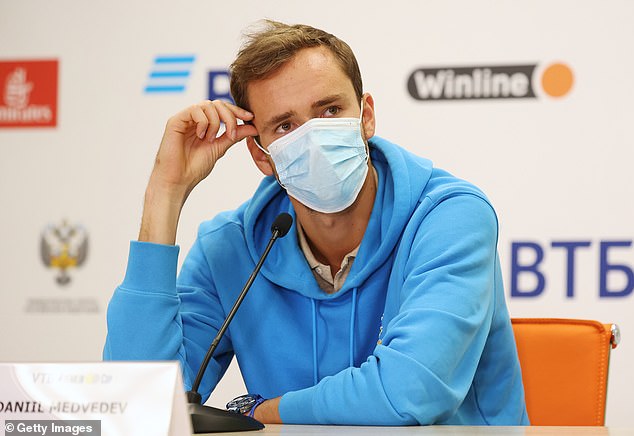 Djokovic has not played since what he admitted was a shattering defeat in New York, but will be busy this month playing Paris, the ATP Finals in Turin and the Davis Cup finals.

For British number one Cam Norrie the coming days will most probably decide whether he becomes an unlikely qualifier for Italy in what seems to be a five-horse race for two spots, in which he starts near the back.

This afternoon he takes on world number 41 Federico Delbonis in what is one of the kinder first rounds, with the Argentinian having lost his last eight matches.

Realistically he must look to reach the last eight at this week’s points-rich event, the penultimate tournament of the regular season. The recent Indian Wells champion may also have to rely on his rivals above him slipping up early, unless he goes on another tear all the way to the weekend.

Andy Murray has been given a wildcard ahead of French players, which has caused some raised eyebrows locally, while Dan Evans is in action today against Kazakhstan’s Alexander Bublik. 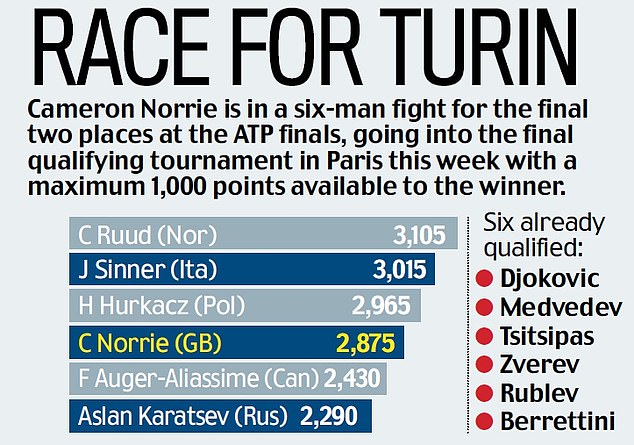 Jamie Murray and Bruno Soares put themselves in strong contention to qualify for the doubles in Turin when they on Sunday defeated Andrey Golubev and Hugo Nys 6-3 6-4 to win the St. Petersburg Open in Russia.

The British-Brazilian duo are in the eighth and final qualifying spot, but have a 530 point lead over their nearest challengers, so are in an excellent position to make it.

Joe Salisbury and Rajeev Ram have already qualified in second place, but suffered disappointment yesterday when they lost the final of the Vienna Open 6-4 6-2 to Colombians Juan Sebsastian Cabal and Robert Farah.