It’s Monday, mid-morning. My friend Jackie and I are sipping coffee, watching the Thames flow by through the windows of her West London home. We are chatting about families and work, as friends do. Soon Jackie will be in her clinic at the Cromwell Hospital and I back at my desk researching London’s Russian exiles for my new novel. Our hour together is stolen from busy lives, and it feels all the more luxurious for it.

Jackie Lewis is one of Britain’s top surgeons. She is half-Finnish and half-Chinese – a wonderfully exotic combination – and I am a Serbian writer and academic. We both moved to London in our 20s, married English men and have children of a similar age.

As friendships go, mine and Jackie’s is not that old, just 15 years. Yet I am more likely to forget my wedding date than the day I first met her at Charing Cross Hospital: 20 February 2003. Few friendships begin with news as bad as that which she had to deliver. I had advanced breast cancer and was, at best, facing gruelling months of treatment.

Vesna (right) at the launch of her first novel, which was dedicated to Jackie (left), the surgeon who operated on her breast cancer

Jackie, and the NHS, saved my life. She operated on me twice. First she removed my right breast and, with it, the cancer that threatened to kill me. A year later she carried out reconstructive surgery, transplanting tissue from my stomach to my chest.

At that time, there were just a handful of female surgeons specialising in oncoplastic breast surgery and I had expected a man. I was surprised to see a woman looking younger and much slighter than me. ‘I am afraid it doesn’t look good,’ Jackie said, looking at my mammogram then straight into my eyes. Poised and elegant, she seemed in control of her life, not the sort of person that gets herself into this kind of mess. She proceeded to explain what the tumour meant.

I later wondered what it must be like to have to deliver bad news to people like me as your job. As an academic, I know that telling a student that their grade is low is difficult enough.

I did not think of Jackie as my future friend in those early months. She was a professional, with a touch of briskness. Some compartments are best kept separate – the less you know about a person, the less there must be to haunt you late at night. I, too, kept my distance. I needed to see Jackie as infallible – I was about to put my life in her hands.

Had I looked for signs of our friendship, I might have noticed them. I remember the glint in Jackie’s eye when, the night before the reconstructive surgery, she drew the markings for the cuts with a felt-tip pen, as though my skin was a dress that was about to be taken in. The two lines across my lower stomach looked like a wide smile. I was scared but I could not keep a straight face. There, finally, was a purpose for that half-moon of fat I had hated for years, but never sufficiently either to diet or to join a gym. ‘I am afraid this has got to go,’ Jackie said, and we laughed together for the first time.

I remember Jackie in her green scrubs and flowery cap standing in the hospital lift next to my gurney. ‘See you later,’ she said, as the anaesthetist did his work. The reconstructive surgery was so complex that it made the mastectomy seem as simple as a tooth extraction, but I can’t think of many things as wonderful as waking up to see her smiling face. 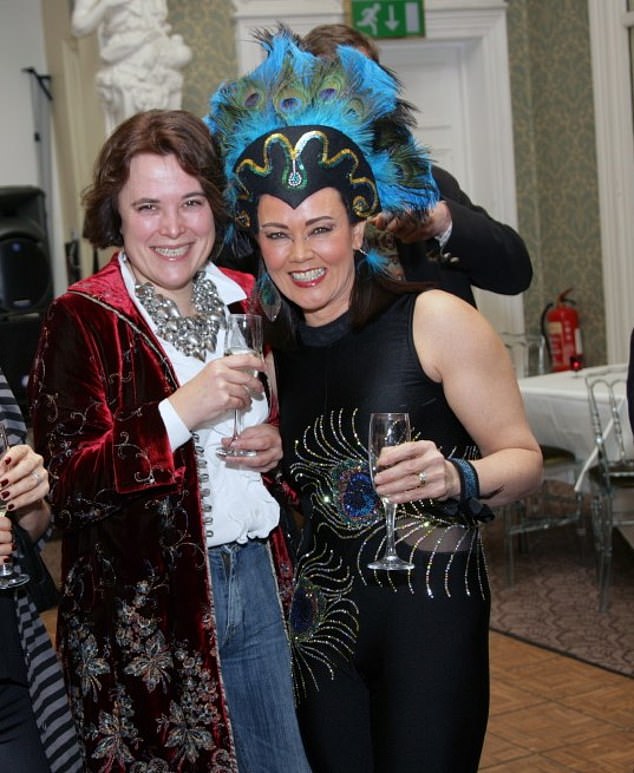 The pair at Jackie’s 50th. ‘We don’t often make close friends in our 40s. Those moments of ‘bare-all’ intimacy that come easily in our teens are not as common,’ writes Vesna

Once or twice, Jackie visited me on the ward when off duty. All patients ask dozens of questions about their treatment. I could not have known that mine were different. ‘What kind of thread do you use to join blood vessels? Do you listen to music when you operate? Why did you choose to specialise in surgery?’ Jackie would answer my questions with patient amusement: ‘A thread thinner than a baby’s hair. I was listening to Vivaldi when I operated on you. I was good with my hands.’

She did not know yet that I wrote. In those days I used to tell everyone that I was a university teacher. To say that I was a writer when I had written only one academic book seemed pretentious. I could no longer keep my writing secret from Jackie when my second book, Chernobyl Strawberries, the story of my childhood and youth written for my son while I was battling cancer, was serialised on Radio 4. I posted a copy to Jackie. I was still having check-ups but was no longer her patient. Some weeks later I received an invitation to a party at her place. That was the real beginning of our friendship.

We don’t often make close friends in our 40s. Those moments of ‘bare-all’ intimacy that come easily in our teens are not as common during the so-called sandwich years when we worry about our elderly parents as much as our children, and even our oldest friendships are confined to an occasional ‘like’ on social media. There is a special joy in a close friendship established relatively late in life. Our confidences are as giggly as teenage girls’, but rich with decades of experience.

Jackie’s professional world is different from mine and that of my other friends in Britain, most of whom are writers and academics. Her work talk can be fascinating and embarrassing in equal measure. I first knew her as a breast surgeon, but she has since also taken up labiaplasty, and a range of female genital treatments that I can’t even think about without blushing. 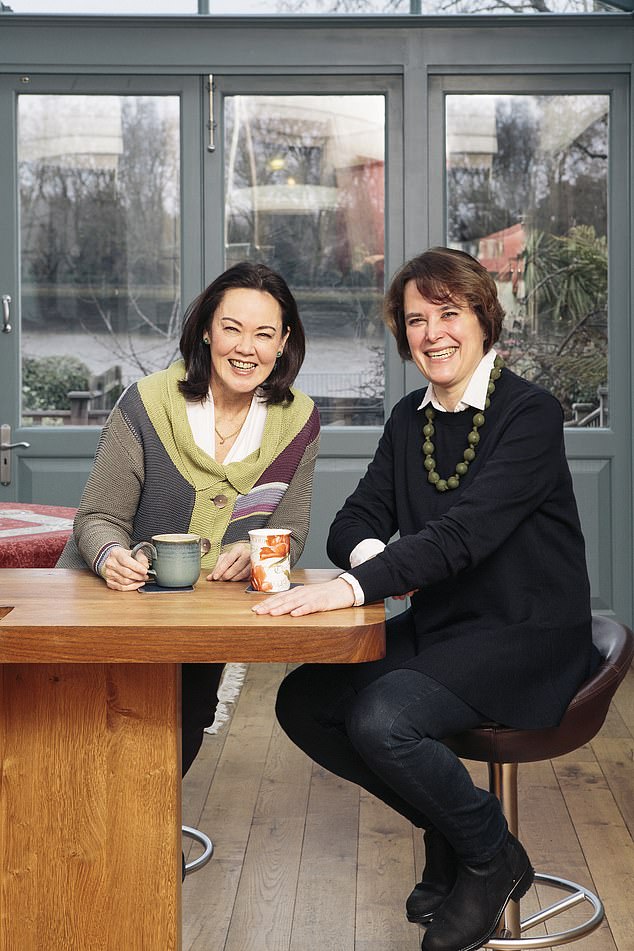 A catch-up over coffee at the riverside home of Jackie. Vesna writes: ‘I dedicated my first novel to Jackie. She was the proudest person at my launch party’

‘Laxity, dryness and stress incontinence are serious problems,’ she says to me over our coffee, as though she had detected my embarrassment. I am as repressed in real life as I am free in my fiction. ‘Women suffer unnecessarily. This is particularly true for menopausal women and for those who have undergone cancer treatment. Just like you. Their sex lives…’

‘Oh, and what are these?’ I say to create a distraction. I point to a pile of exotic mushrooms on Jackie’s kitchen table. She knows me better than to press on. ‘I collected those yesterday,’ she says. ‘I have joined a mushroom-picking club.’

Whatever will Jackie do next? That is the question I always ask myself. In the years I’ve known her, she has been a keen Rollerblader, learned how to make scented candles, embroider cushions, bake cupcakes that would impress Mary Berry and create uncannily lifelike sculptures. One evening I watched her pole dance with the skill of a professional in a competition against women half her age. I chuckled like a teenager when I told my husband that I had attended a pole-dancing event.

My own dancing skills are those of a wooden horse and I am hopeless with my hands. I haven’t made anything in years, but I remember all the botched handicrafts I produced at school: I would be the worst surgeon in the world. 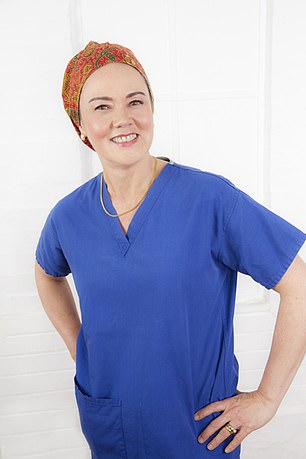 Jackie in her scrubs. ‘She needs to be active to forget the stresses of her work’

It took me a while to understand why Jackie’s ways of relaxing were so different to mine. I am not keen on any kind of group activity. There is never enough time in the day to be alone with my keyboard. She needs to be active to forget the stresses of her work. Her skill can make the difference between life and death; the worst I can do is make a reader fling my book against the wall.

I dedicated my first novel to Jackie. She was the proudest person at my launch party. I am about to publish my second and she no longer marvels at my skill of spinning the web of a story out of nothing. She just asks: ‘What is it about this time?’

Some years ago we decided that we would write a memoir together: the story of our friendship. But this is a promise I haven’t managed to keep. The further away I get from cancer, the more difficult I find it to think about how Jackie and I met.

Survivors are often expected to find a silver lining in the story of their illness. I found the thought that I might not live to see my son grow up so shattering that I want to shout that cancer is nothing but awful. Yet, here it is, nonetheless, a silver lining: a friendship that has illuminated my 40s and 50s, the years I never thought I’d see.