Novovax vaccine prevents 96% of infections and all deaths, data shows

A new Covid-19 vaccine that could soon be approved in Australia appears to be even better than the others on offer.

Trial data from the UK shows the Novavax jab stops 96 per cent of infections and all serious illness and death from the original version of coronavirus.

Australia has ordered 51million doses of the jab which has not yet been approved by regulators.

Trial data from the UK shows the Novavax stops 96 per cent of infections and all serious illness and death from the original version of coronavirus. Pictured: NSW Premier Gladys Berejiklian gets her AstaZeneca jab

The vaccine was also about 86 per cent effective in stopping the more contagious UK strain of Covid-19.

It was about 90 per cent effective overall, combining data from people infected with both versions of the coronavirus.

In a smaller trial conducted in South Africa – where volunteers were primarily exposed to another newer, more contagious variant widely circulating there and spreading around the world – the Novavax vaccine was only around 55 per cent effective at stopping infection but still fully prevented severe illness and death.

Results from the final analysis of the UK trial were largely in line with interim data released in January.

Australia is currently rolling out the Pfizer and AstraZeneca jabs which are both very effective at stopping serious illness.

People who have received a vaccine can be given another type of jab later if it proves to be better.

It comes after Health Department boss Brendan Murphy conceded all Australians will not be vaccinated by October, which was the target proposed by the government.

But Professor Murphy said a solitary shot of AstraZeneca’s Covid-19 jab – rather than two – will be enough to ‘completely vaccinate’ the population by then.

Speaking on Thursday, Professor Murphy admitted the target of four million vaccinations by next month also won’t be achieved.

He said ‘global supply issues’ with a number of European countries – including Italy blocking the export of a shipment of 250,000 doses to Australia – was the reason for the delay.

Australia had been expecting 3.8million doses of AstraZeneca vaccine from Europe in March, but so far only 700,000 doses have arrived – leaving a 3.1million shortfall.

‘It would be impossible to predict exactly when we (Australia) will hit four million (vaccinations) until we actually know what the international supplies will be like,’ Mr Murphy said.

‘But it will be done as quickly and safely as we can with the available vaccines.’

About 125,000 Australians have so far received the jab.

Doubt over the inoculation time-frame comes as a number of GPs said the October target was unrealistic, according to The Australian. 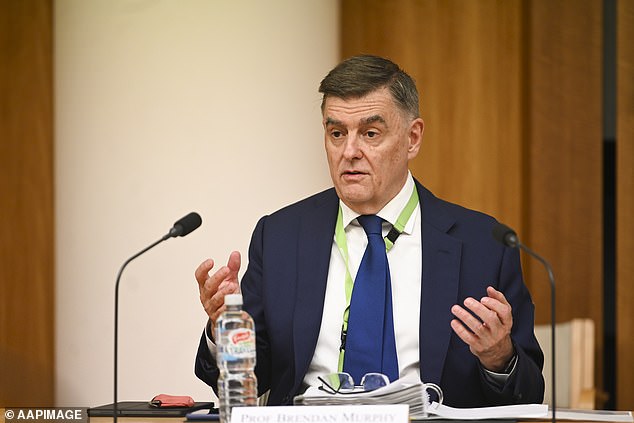 Many private and public practices are anticipating they will struggle to vaccinate the hundreds of people per day required to meet targets set by the federal government.

Several GPs believe a more viable target is the early months of 2022.

‘It will be very difficult to achieve,’ he said. ‘Aiming to have the first dose administered by the end of October is more realistic.’

Australian GP Alliance deputy chairman Mukesh Haikerwal went a step further, declaring ‘phones will literally melt in front of us with the calls coming through once a vaccine is readily available’.