Donald Trump lawyer Rudy Giuliani sought to clean up televised comments from Wednesday night that invited new speculation on possible collusion between Trump campaign officials and Russia – saying he has ‘no knowledge’ of any such conduct.

Giuliani issued a statement Thursday following his appearance on CNN, where he refused to take a firm stance that no campaign collusion happened – despite his own and President Trump’s firm earlier denials on the subject.

‘I never said there was no collusion between the campaign, or between people in the campaign,’ Giuliani told the network. ‘I said the President of the United States.’

But on Thursday, Giuliani said although he only represents Trump, he has no knowledge of the ‘thousands of people’ who worked on Trump’s election effort.

‘To clarify my comments during the Cuomo interview last evening because they have been misinterpreted I issue the following statement: I represent only President Trump not the Trump campaign,’ Giuliani said in a statement provided to DailyMail.com.

‘There was no collusion by President Trump in any way, shape or form. Likewise, I have no knowledge of any collusion by any of the thousands of people who worked on the campaign. The only knowledge I have in this regard i the collusion of the Clinton campaign with Russia which has so far been ignored,’ he added, attacking Trump’s 2016 rival.

His cleanup comes hours after Giuliani claimed he ‘never said there was no collusion’ between Trump’s 2016 presidential election campaign and Russia – only that Trump himself was not involved.

Speaking to CNN’s Chris Cuomo on Wednesday, the former New York mayor said he did not know if others involved in the campaign had worked with Russia.

‘I never said there was no collusion between the campaign, or between people in the campaign,’ Giuliani said. ‘I said the President of the United States.’

‘There is not a single bit of evidence the President of the United States committed the only crime you can commit here, conspiring with the Russians to hack the DNC.’

The explosive comments raised speculation that Trump’s lawyer could be trying to get out ahead of some new development in the Mueller probe and stake out a new defensive position.

It comes days after it was revealed that former Trump campaign chair Paul Manafort passed campaign poll information during the campaign to Konstantin Kilimnik, a Russian who Mueller’s filings have said is connected to a Russian intelligence agency.

Despite his claims, Giuliani has actually stated that that there was no collusion between the Trump campaign and Russia multiple times.

In May, Giuliani told Fox News’ Laura Ingraham that the Trump campaign did not collude with Russia because it did not use the information it received during a Trump Tower meeting in June 2016 with Russian lawyer Natalia Veselnitskaya.

‘They never used it. They rejected it,’ Giuliani declared. ‘If there was collusion with the Russians, they would have used it.’

‘It’s a disgrace that you even ask that question,’ he told reporters on the White House’s South Lawn on Tuesday. ‘It’s all a big fat hoax.’ 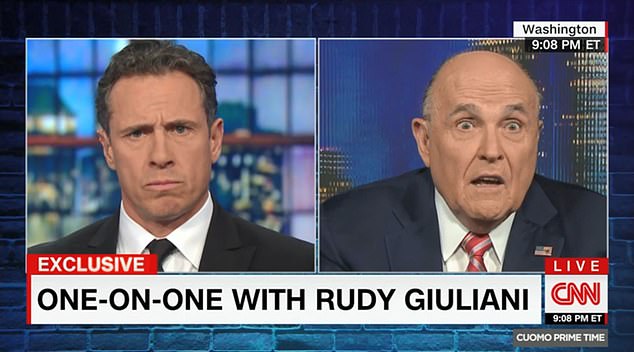 Speaking to CNN’s Chris Cuomo on Wednesday, the former New York mayor said he did not know if others involved in the campaign had worked with Russia 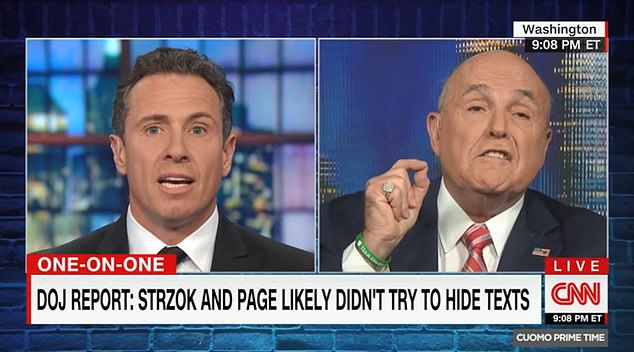 ‘I never said there was no collusion between the campaign, or between people in the campaign,’ Giuliani said. ‘I said the President of the United States’

In the first report, The New York Times said the FBI opened an investigation into whether Trump was acting on Russia’s behalf soon after he became president.

Trump’s behavior in the days around Comey’s May 2017 firing as FBI director, specifically two instances in which he seemed to tie Comey’s ousting to the Russia investigation, helped trigger the counter-intelligence part of the investigation, according to the newspaper.

The president responded to the report during an interview broadcast on the Fox News Channel after host Jeanine Pirro, who is also a personal friend of Trump, asked whether he is currently or has ever worked for Russia.

Trump never answered Ms Pirro’s question directly, but went on to claim that no president has taken a harder stance against Russia than he has.

‘If you ask the folks in Russia, I’ve been tougher on Russia than anybody else, any other…probably any other president, period, but certainly the last three or four presidents,’ he said. 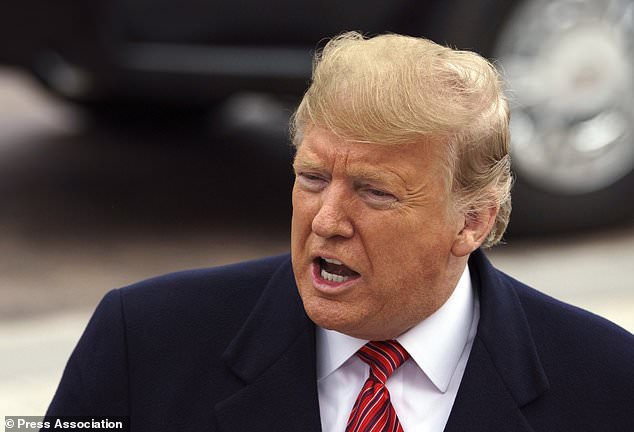 Meanwhile, The Washington Post detailed what it said were the unusual lengths taken by Trump to hide the contents of his conversations with Russian President Vladimir Putin.

Manafort has admitted to sharing polling data with a Russian during the 2016 presidential race, according to a court filing inadvertently made public by his lawyers. CNN reported that the intended recipients were two pro-Russia Ukrainian oligarchs.

But on Wednesday, Giuliani suggested that was ‘not collusion’.

‘Polling data is given to everybody,’ he told CNN.

The overall investigation is looking into Russian election interference and whether Trump’s campaign co-ordinated with the Russians, as well as possible obstruction of justice by Trump himself.