A day after quoting South Carolina Republican Rep. Trey Gowdy on his Twitter feed, the president turned to the right on Thursday – citing the opinion of conservative radio talk show host Rush Limbaugh.

Limbaugh argued Wednesday that the FBI had a duty in 2016 to inform the Trump campaign that it was probing it for potential links with Russia. 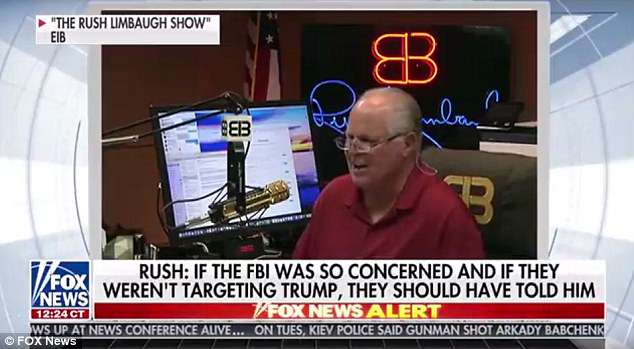 Limbaugh said Wednesday on his raido program that if the FBI had been concerned about Russia infiltrating the Trump campaign, it should have told them 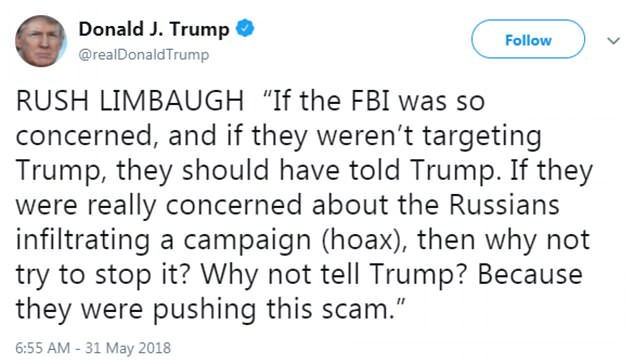 Trump added the word ‘hoax,’ and left out the radio host’s caveat that the statement was merely his opinion

‘If the FBI was so concerned, and if they weren’t targeting Trump, they should have told Trump,’ the president quoted Limbaugh as saying. ‘If they were really concerned about the Russians infiltrating a campaign (hoax), then why not try to stop it? Why not tell Trump? Because they were pushing this scam.’

Trump added the word ‘hoax,’ and left out the radio host’s caveat that the statement was merely his opinion.

‘Why not tell Trump?’ the host had asked on the radio. ‘Well, the answer’s perfectly clear, to me. They were running this whole story. They were pushing this scam.’

Hannity, a longtime Trump-backer who has the president’s ear, restated the contention: ‘Great insight. Rush Liumbaugh earlier today pointing out, rightly so, that if the FBI’s so worried about Russia, Russia trying to infiltrate the Trump campaign, they should have warned him.’ 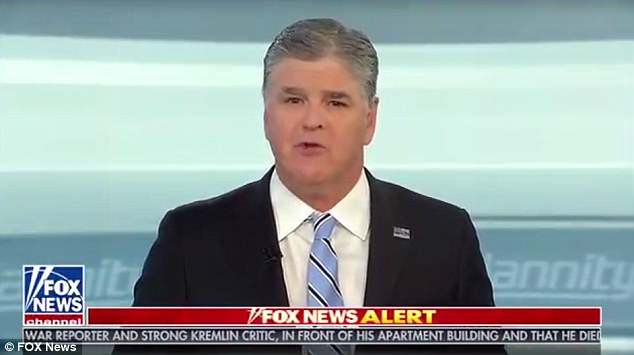 NBC News reported last December that seinor FBI officials warned the Trump campaign in July 2016, during a ‘high-level counterintelligence briefing,’ that Russia and other U.S. adversaries would likely try to infiltrate the organization – which had just propelled Trump to the GOP’s nomination.

The agency did not, however, tell campaign officials that it might authorize informants to gather intelligence on them or their advisers.

Gowdy said Tuesday night that Trump will ultimately be grateful the FBI sent one or more informants to gather information about a trio of his campaign aides, since ‘he was never the target – Russia was the target.’

Trump seemed anything but grateful just moments later in Nashville, Tennessee, asking 5,500 supporters: ‘How do you like the fact they had people infiltrating our campaign?’

The jab was a reference to Stefan Halper, a former Cambridge University professor who made contact with at least three Trump campaign advisors in 2016.

Halper was trying to learn how much George Papadapoulos, Carter Page and Sam Clovis knew about Russia’s attempts to hack Hillary Clinton’s emails and turn the election to Trump’s advantage.

‘These guys were going at us from all different angles,’ claimed Clovis.