Nicho Hynes has been rewarded for a stunning 2022 campaign with the Cronulla gun named the Dally M player of the year, landing the most votes ever to win the top prize.

Hynes was picked up by the Sharks last year and seized his chance of regular minutes under Craig Fitzgibbons, having been frustrated at the star-studded Melbourne Storm.

And having entered Wednesday’s awards ceremony as an outside chance of triumphing, Hynes soared up the leaderboard to leapfrog Ben Hunt and win with 38 points. No Dally M winner has matched that total before. 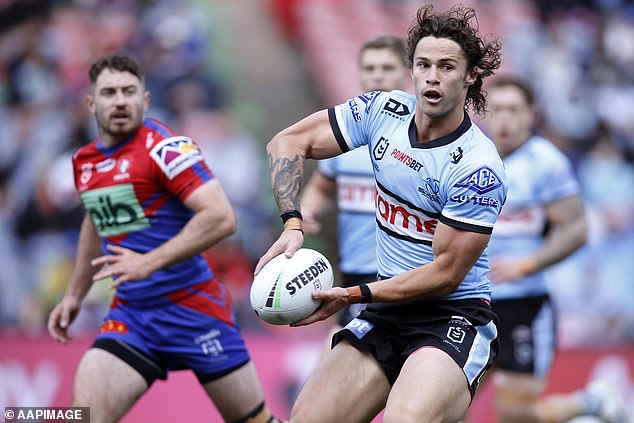 ‘I can’t believe it to be honest, I came here not confident one bit, I thought Benny Hunt was taking it out for sure,’ Hynes said on stage.

‘I just came here tonight extremely grateful to be here, surrounded by great players and five years ago I was sitting at home watching this and only dreaming about being here.

‘Honestly I was just coming here tonight expecting to catch up with some old friends.’

Elsewhere, North Queensland’s Todd Payten was named coach of the year after overseeing a remarkable turnaround for the Cowboys, helping them land a third place finish and a home preliminary final.

Cowboys youngster Jeremiah Nanai scooped the rookie of the year prize after the 19-year-old bagged a huge 17 tries this campaign.

Panthers skipper Isaah Yeo won the captain of the year award ahead of his side’s grand final on Sunday, while Hynes won the Provan-Summons award for his role in putting mental health in the spotlight after Paul Green’s death.