REVEALED: Phil Gould ‘gave Bulldogs a ROCKET and took over a training session’ in bid to snap Canterbury’s SIX-GAME losing streak – but under-fire coach Trent Barrett insists he has no issue with general manager’s intervention

Desperate times call for desperate measures and Phil Gould has reportedly taken drastic action in a bid to arrest the Bulldogs’ alarming slump in the NRL.

Canterbury fell to their sixth-successive defeat on Saturday following their 34-14 loss to Brisbane, with the strugglers stuck at the bottom of the ladder after seven rounds of action.

As a result, Trent Barrett’s position as coach has come under scrutiny, although the club’s general manager of footballer, Gould, has long insisted that he is the man to take them forwards.

However, Fox Sports reports that Gould felt obliged to take on a hands on approach at Belmore this week, with the chief unleashing a ‘ferocious’ spray on the underperforming squad during a team video meeting.

He is understood to have praised the Bulldogs NSW Cup side for their win over Mounties before ‘giving a rocket’ to halfback Kyle Flanagan and a host of other stars.

Following the video session, in which he was ‘blunt’ about the squad’s defensive performance against the Broncs, Gould played a major role in the club’s training session. 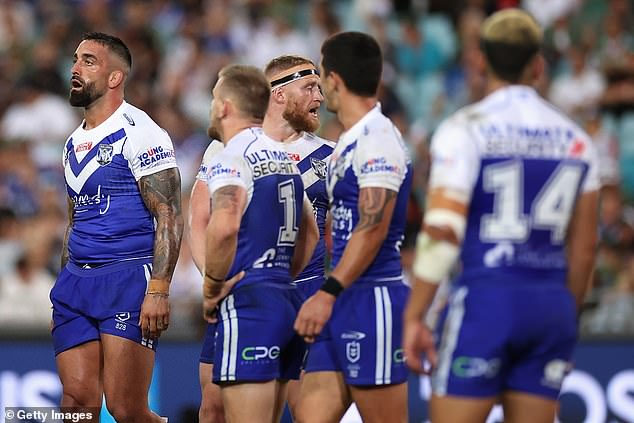 Wednesday’s report throws up a different complexion to the coaching dynamic at Belmore than that which had previously been suggested by the club, although Barrett insists he has no issue with Gould’s involvement.

‘It’s not the first time Gus has spoken to the players. He and I speak on a daily basis often more than ten times a day,’ Barrett said.

‘We thought it was a good idea. We had a chat last week about some statistics that we keep and then Gus came in and presented to the team. 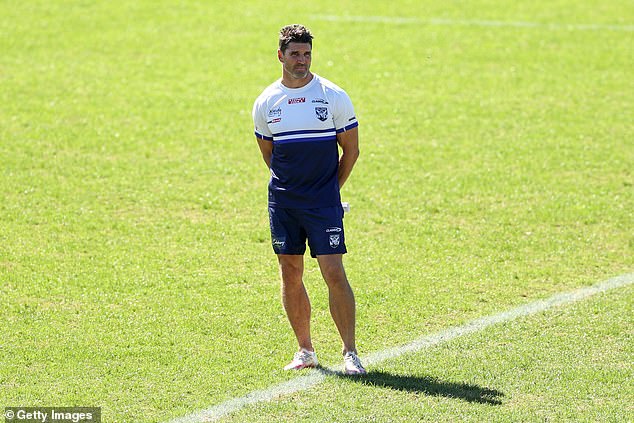 ‘There was a hell of a lot of improvement in the first half against the Broncos but then there were a couple of things that I thought Gus could help us with. It was good.

‘I wanted Gus to have a voice in a certain part of the field and give the team a bit of a rocket around our discipline and our line speed.

‘I’ve absolutely got no dramas with it because Gus can help us. That’s what he’s there for. He’s been terrific for me.

‘He wants to win too and we all want results so if he thinks he can help with a couple of things then by all means, help. We’re all in it together.’