A mother-of-ten has revealed how her family escaped from a van that burst into flames while travelling down a busy highway.

Gina Faulkner and six family members set out from Bellambi to Bathurst, in NSW, for a baby shower on Friday night.

Her nine-week old grandson was secured in a baby seat and her two youngest children in the far back seat, with no access to doors.

Ms Faulkner told the Illawarra Mercury a passing motorist pulled up next to her, beeping his horn and yelled: ‘get out of the car, you’re on fire.’

‘I was doing 90km/h and the smoke was disappearing behind me, but then when I pulled over and the smoke started to pour out, I realised how bad it was,’ Ms Faulkner said.

‘I was just screaming,”get the baby out! Get the kids out!”. The baby was the hardest because he was strapped into the capsule. It was terrifying.’

In the van were daughters Ashleigh Faulkner, 20, Lauren Kinney, 14 and Abbey Kinney, eight.

They left everything in the van and fled. Ms Faulkner said the van burst into flames less than two minutes later, incinerating everything inside. 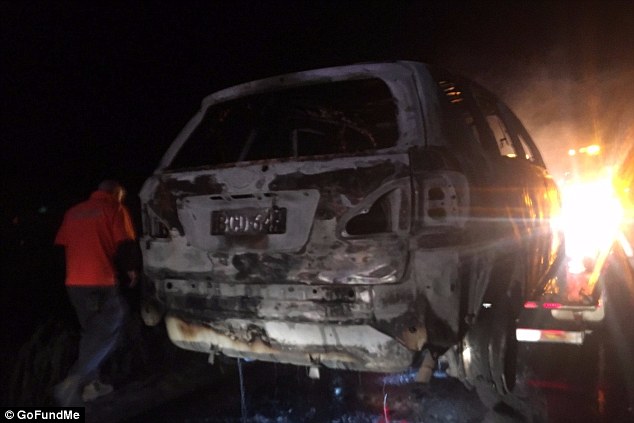 Ms Faulkner said there was a problem with the car overheating, but a mechanic ‘assured me that it would be fine, and that if it overheated I’ve got to stop and pour water into the overflow bottle that comes off the radiator.’

Ms Faulkner said she did this shortly before reaching Picton but the overheating light came back on just before the car caught on fire.

The loss of the family’s car and belongings have left the family in debt.

Another one of Ms Faulkner’s children, Sarah Faulkner, has started a GoFundMe page to help the family recoup the cost of the accident.