NSW needs to live alongside Covid but stricter rules to combat Omicron are on the table, Dominic Perrottet said on Monday.

As the state recorded 2,501 new cases and some experts demanded tougher restrictions, the premier called for calm and said vaccinations can protect the hospital system.

Cases have surged due to the relaxation of rules and the spread of the more infectious but potentially less severe Omicron strain which was identified last month, leading Health Minister Brad Hazard to warn the state may see 25,000 cases a day by January.

Labor has called for the return of mandatory mask-wearing in shops – just five days after the rules was removed – but Mr Perrottet said he wants to treat citizens ‘like adults’ and let them make their own choices.

‘We are taking a balanced and proportionate response. It is completely focused on keeping people safe while at the same time opening up our economy and ensuring that people are able to work, be in jobs and provide for their families,’ he said on Monday.

We have to learn to live alongside the virus… now is our moment. Now is our time to do just that

‘There will also be new variants of this virus. It is not going away. We need to learn to live alongside it.

‘I appreciate as premier there is concern in the community but now is our time to stand up, to stand tall, to look after each other, to treat people with kindness and respect and we’ll get through it.’

Mr Perrottet said the focus should be on hospitalisations not case numbers but warned that restrictions could tighten up if ICU wards become overwhelmed.

‘We will always tailor our response to the circumstances, ICU presentations are key,’ he said. 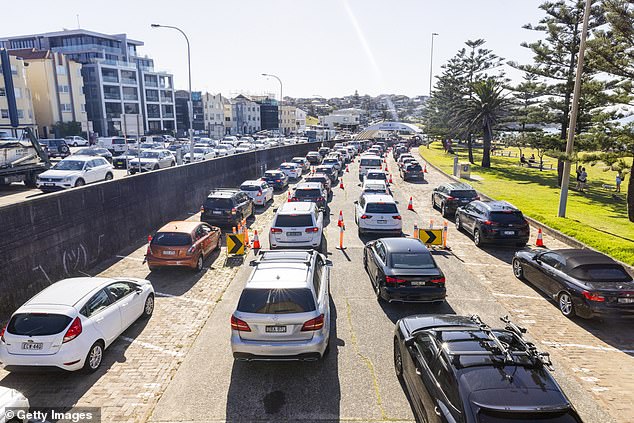 There were 144,368 Covid tests take in NSW on Sunday, partially explaining high case numbers. Pictured: Cars lining up for testing at Bondi

But the premier suggested he wanted to avoid lockdowns, saying: ‘We are not going to have a knee-jerk reaction and dent confidence in the state.

‘We have a compact with the people of our state, the great people of New South Wales who have gone out and been vaccinated.

‘We have to learn to live alongside the virus. I know we have been saying that for two years, but now is our moment. Now is our time to do just that.’

Mr Perrottet said 26 of the 33 people in ICU in NSW were unvaccinated, showing how jabs can prevent hospitals being overwhelmed and therefore prevent tighter rules.

He urged residents to get their booster shots if they had their second jab more than five months ago and said the state was prepared for rising cases.

‘But we cannot live in a world where there is no Covid. We have to live in the world as it is. And as it is, the best thing we can do is have a high vaccination rate.

‘That will put downward pressure on the health system as we move through this next phase.

But Mr Perrottet was careful to warn residents that a restrictions would still be on the table next year.

‘There will be challenges, I can’t forecast what will come our way in 2022. This pandemic throws up curveballs,’ he said.

NSW’s double dose vaccination rate is 93.4 per cent, one of the highest in the world. 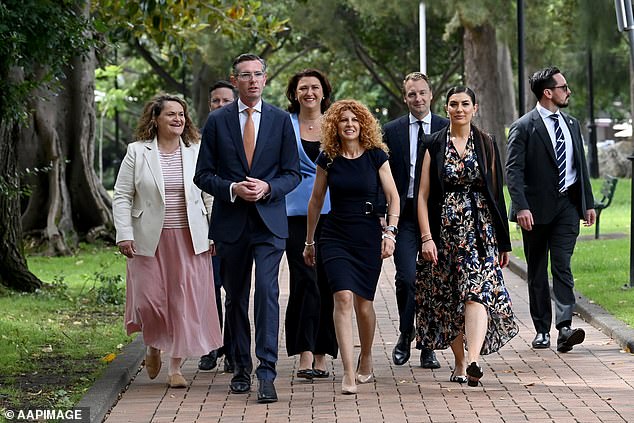 Mr Perrottet made the comments on Monday as he unveiled his new cabinet and candidate for Strathfield Bridget Sakr (right of the premier), whose daughter Veronique died in a car crash near Oatlands Golf Club last year

Mr Perrottet also had a dig at Queensland and Western Australia for keeping state borders closed for much of the past two years, saying their cautious stance was due to a lack of investment in hospitals.

‘When I look around the country right now and I see borders closing, they are closing for one reason. They are closing because they have not invested in their health system like we have in New South Wales.

‘Liberals and Nationals are not known for health. But now if you look around the other states, it is the Labor states that are closing their borders because they have not invested in their health system.

‘We have the best health system in the nation if not the country. We can open up safely. I am completely focused with the Health Minister on ICU presentations, we monitor this every day,’ he said.

The premier made the comments as he unveiled his new cabinet and candidate for Strathfield Bridget Sakr, whose daughter Veronique died in a car crash near Oatlands Golf Club last year.

Experts are divided on what impact the Omicron strain will have in Australia.

Sydney-based clinical immunologist Dan Suan has warned hospitals will be overwhelmed and called for harsher restrictions.

‘Omicron may be slightly less severe, but if the outbreak is huge and you put those two things together, we’ll still have a huge number of people being hospitalised and it will overwhelm the hospital system,’ he said in a Facebook video on Sunday.

But Australia’s Chief Medical Officer Paul Kelly declared a milder strain such as Omicron would be his ‘Christmas present’ because it would go through the population and provide immunity instead of severe illness.

Former Deputy Chief Health Officer Nick Coatsworth has also called for calm and said lockdowns are not the answer.

‘We’ve been held back by some medical commentators who insist on focusing on case numbers. It’s disappointing they’ve been unable to move forward,’ he said.

Last week Premier Perrottet did not rule out lockdowns but said ‘that’s certainly not my intention’ when grilled by Alan Jones. 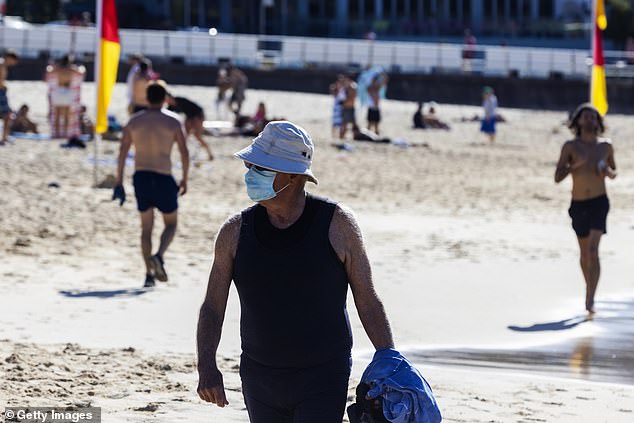 Labor has called for the return of mandatory mask-wearing in shops but Mr Perrottet said he wants to treat citizens ‘like adults’ and let them make their own choices. Pictured: A man wearing a mask on Bondi Beach