Thousands of residents across New South Wales have endured a sleepless night as major evacuation and flood warnings were issued for suburbs already flooded by torrential rain.

A once-in-a-century rain storm has battered the state on Saturday as 17,000 were people evacuated from their homes – with the deluge expected to continue until Thursday next week at the earliest.

Badly-hit Port Macquarie on the mid-north coast has received as much as 400mm of rain in the 24 hours to Saturday afternoon.

Nine evacuation centres have opened in NSW to cope with the influx of those left homeless by the crisis – seven on the mid-north coast and two in the Hunter region.

The Bureau of Metereology has warned heavy rainfall – that will likely lead to flash flooding – is expected for the Northern Rivers, Mid North Coast, Hunter, Sydney Metropolitan, Illawarra, and Central Tablelands districts.

In some areas, heavy rain and flooding may be life-threatening and the next six to 12 hours will see roads likely cut off by water and see an increased risk of landslips.

The Warragamba Dam, Sydney’s main reservoir, began overflowing just after 3pm on Saturday and the spill is expected to increase into Sunday, Water NSW said. 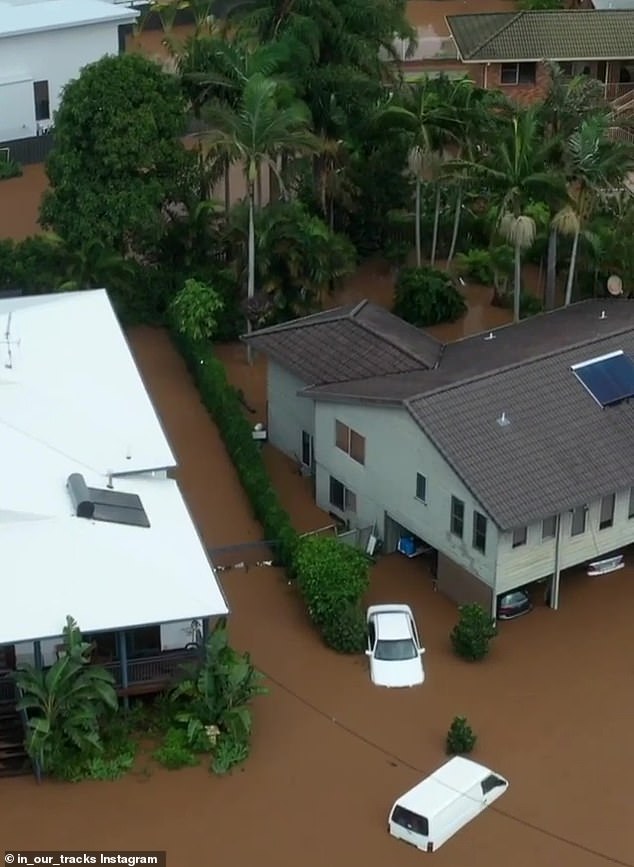 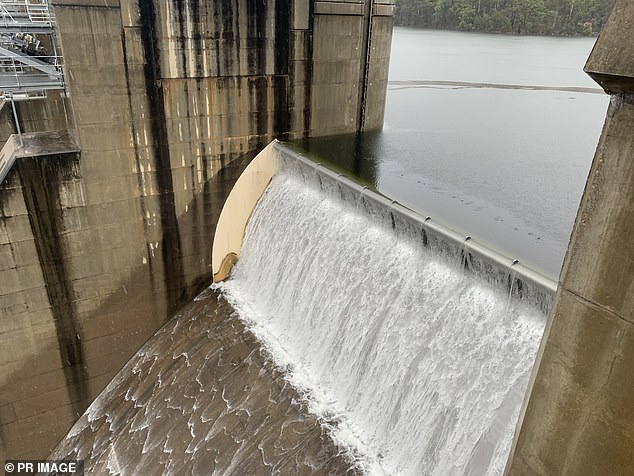 The Warragamba Dam, Sydney’s main reservoir, began overflowing just after 3pm on Saturday and the spill is expected to increase into Sunday (pictured)

Just after 5pm the NSW SES told residents of Picton in the south-west of the city to prepare to evacuate within 12 hours as floodwaters rise to dangerous levels in the Stonequarry Creek.

Later in the evening suburbs near the swollen Hawkesbury River – Pitt Town Bottoms, low lying parts of North Richmond, Grono’s Point and Cornwallis – were also subject to an evacuation warning.

Senior BOM climatologist Agata Imielska said Greater Sydney could expect about 100mm of rain during the next 24 hours or so, but the lower Blue Mountains is expected to get 200-300mm.

The band is moving down from the Kimberley and will reach eastern NSW from Monday night, when it will ‘link up’ with the slow-moving coastal trough that is causing the flooding in NSW.

Parts of Port Macquarie, and several nearby towns, have flooded and further south at Taree is in the grip of a flood rivalling its worst on record 92 years ago.

For NSW residents not in immediate danger, the premier urged them to restrict their movements and heed all warnings. 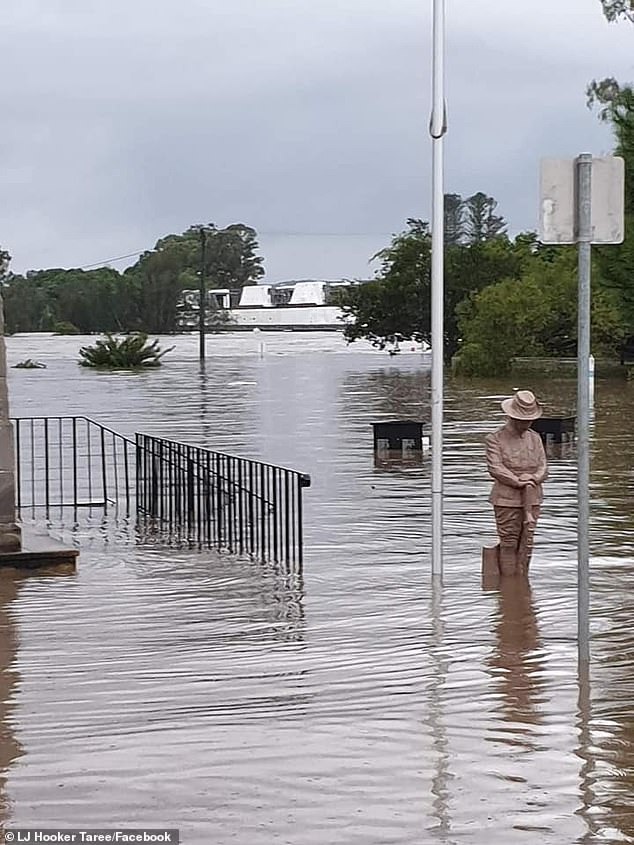 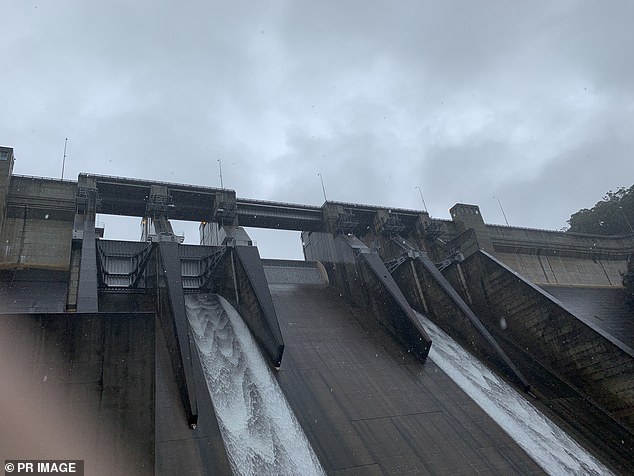 ‘That’s 500 crews that have put their lives at risk because people have not heeded the warnings,’ he said.

The lower Blue Mountains are forecast to see the worst of the rain on Saturday and into Sunday.

Search teams are on the water off the coast of Coffs Harbour looking for a bodyboarder in his 60s who went missing mid-afternoon. 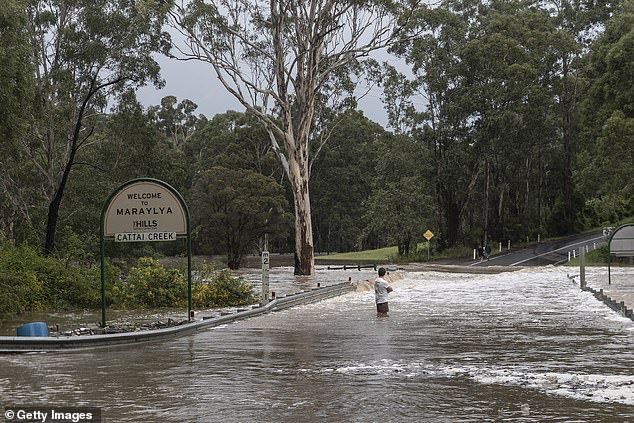 In Katoomba, in the upper Blue Mountains, two bushwalkers were cut off by floodwaters on the Six Foot Track with NSW Ambulance saying they were ‘extremely fortunate’ to have survived.

The rescue required four crews and conditions were difficult with some roads impassable because of flooding.

The Bureau of Meteorology issued a severe weather warning on Saturday morning covering an area from NSW mid-north coast where the towns of Port Macquarie and Kempsey are bracing more more flooding, to the far south coast and Canberra.

Major flood warnings have also been issued for the Hawkesbury, Nepean Valley and Colo Rivers as water levels are expected to rise to ‘moderate flood levels’ from late Saturday to Sunday. 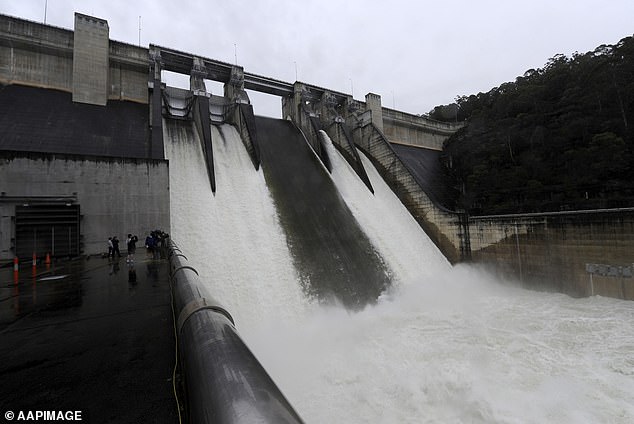 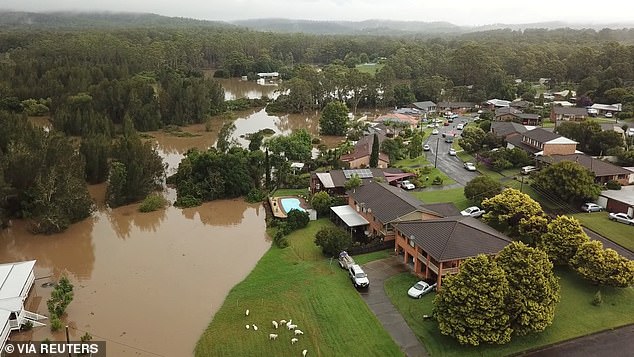 The Nepean River at Menangle Bridge is expected to reach 7.60m on Sunday with water levels to also reach moderate flood levels at Wallacia Weir.

Major flooding is possible along the Hawkesbury and Lower Nepean River.

Minor flooding is current along the Hawkesbury River at Penrith, North Richmond and Windsor.

The Colo River at Putty Road is expected to reach the major flood level of 10.70m on Sunday afternoon.

River systems on the mid-north coast that have already flooded communities are expected to cop more rain on Saturday night and on Sunday, as Sydney’s river systems swell dramatically.

The Federal Government said the wild weather will affect the vaccine delivery of phase 1b to over 6.1million Australians in Sydney and across regional NSW.

The federal government said they were urgently working with doctors administering the vaccine to restore the supply of doses.

‘The Department of Health is working directly with GPs on these issues and we ask for the public’s patience and understanding with these unforeseen supply delays,’ a government spokesperson said. 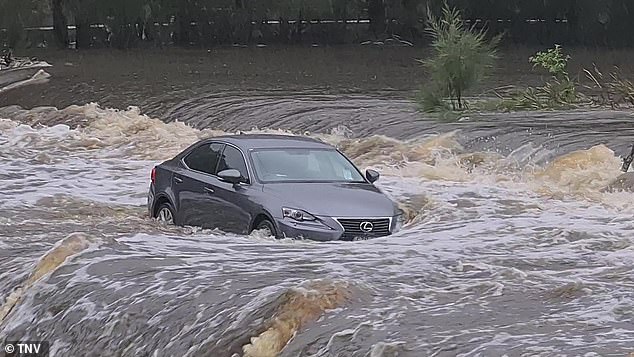 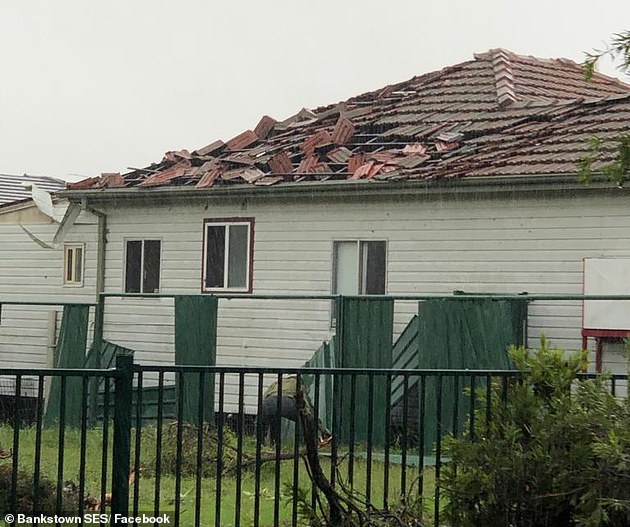 ‘The Department of Health is working with logistics companies and doctors to determine when delivers of the vaccines can be received due to heavy rainfall and flooding.’

Speaking in an emergency press conference, NSW Premier Gladys Berejiklian said the ‘extreme weather event’ would persist well into next week – with rain not due to stop until Thursday or Friday.

‘The last time we got major floods in the NSW the weather event passed in two or three days, unfortunately, this will be a deep-seated, extreme weather event,’ she said.

‘This is an event that will not be going away in the next few days.’ 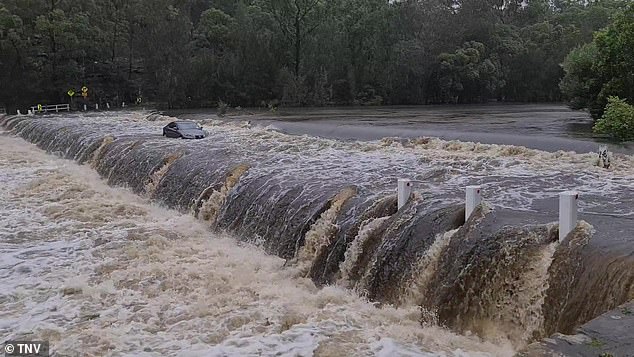 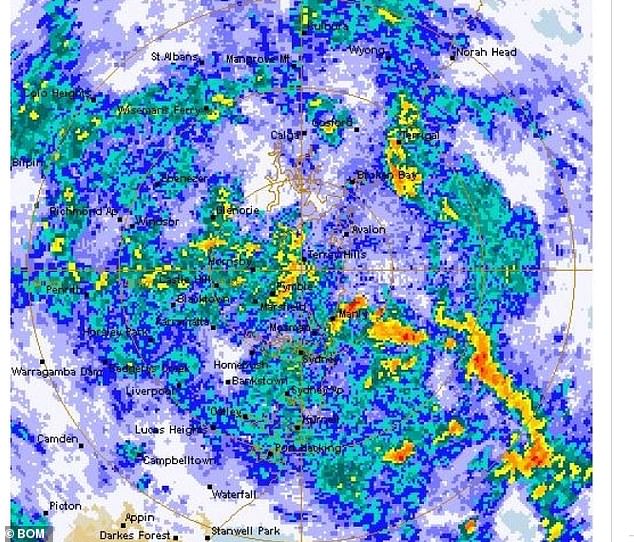 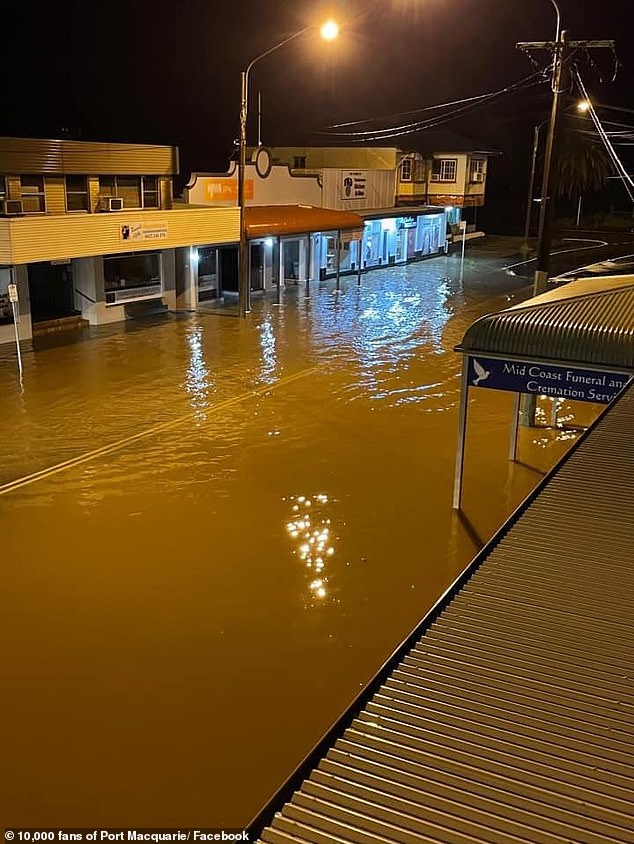 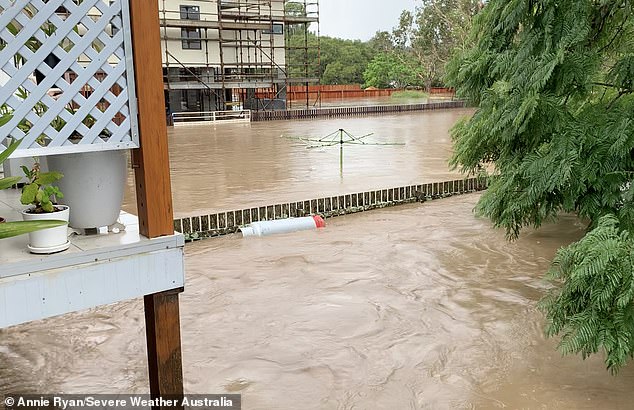 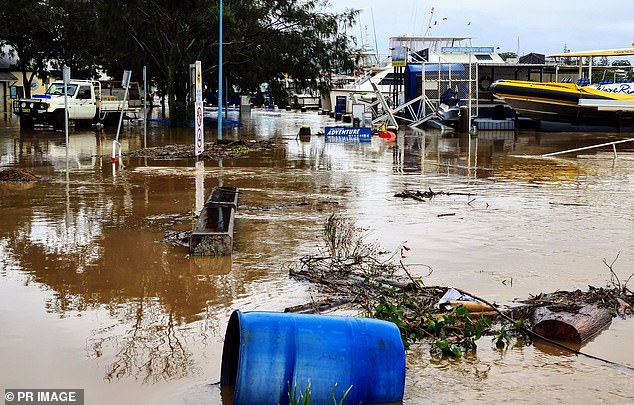 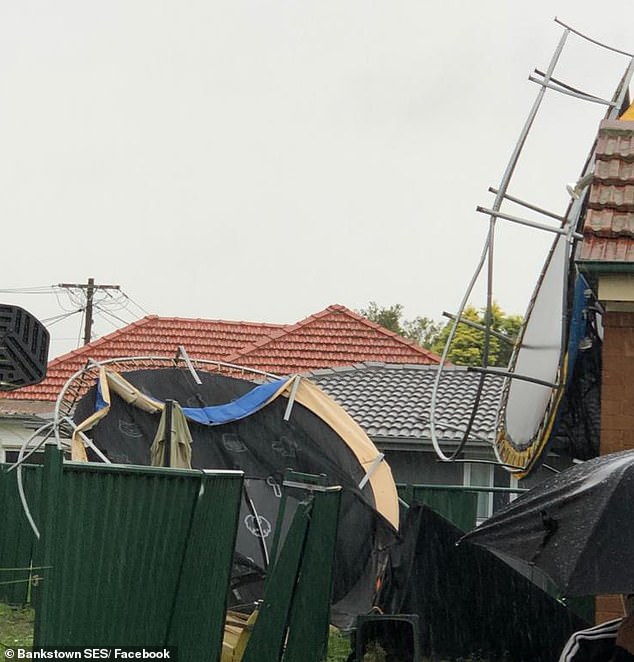 A ‘mini-tornado’ left a huge path of destruction through Chester Hill in Sydney’s west, damaging several homes and bringing down a tree 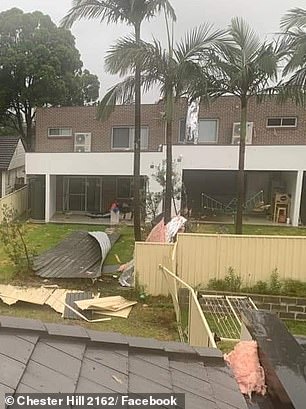 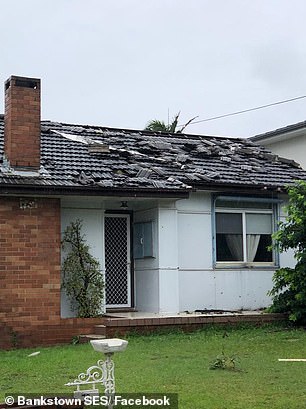 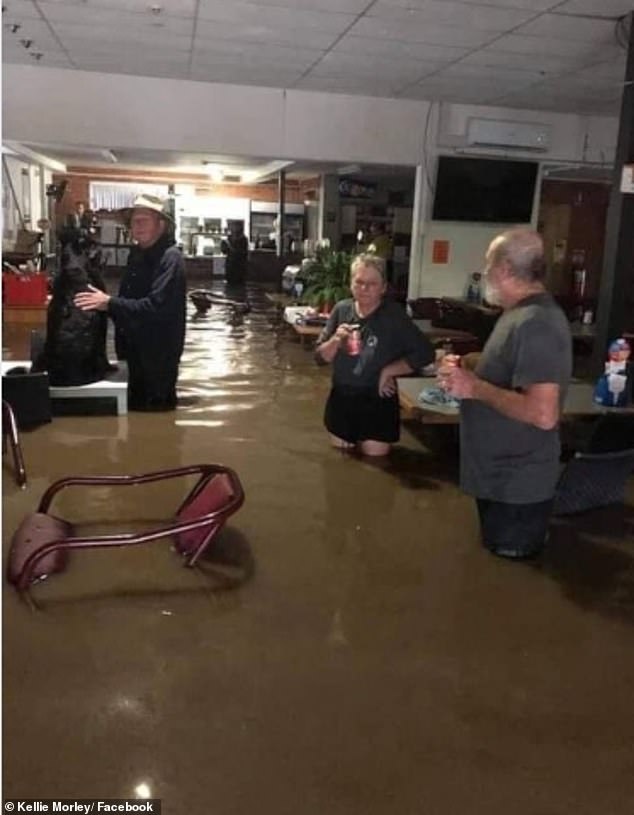 Locals are seen having a drink at a pub despite the venue being completely flooded by the wild weather (pictured pub in Telegraph Point, northern NSW)

‘A range of practical assistance measures are now available to help people get back on their feet and help councils get on with the clean-up and repairs to infrastructure,’ Emergency Management Minister David Littleproud said.

Prime Minister Scott Morrison said the scenes across NSW were ‘absolutely heart-breaking’ and government was ready to assist, including summoning the Australian Defence Force.