‘No one goes to Adelaide’: Treasurer takes extraordinary swipe at South Australia – as the winners and losers of the NSW budget are revealed

The Treasurer of Australia’s biggest state, New South Wales, has taken a swipe at South Australia as he delivered a Budget promising record spending on big-ticket transport projects.

Dominic Perrottet mocked Adelaide as he pleaded for more money from his federal Liberal-National counterparts.

‘No one who comes to Australia comes to Adelaide. They go to Sydney and Melbourne,’ he told reporters in Sydney on Tuesday.

‘If we are taking on more population, we should get a higher proportion of infrastructure spending and we have pressed that point with the government when it comes to the $3billion for the Metro West.’

Construction is due to start next year on an underground tunnel that will take commuters, in a driverless train, from the city to Parramatta in just 20 minutes, via Olympic Park.

The man in charge of government spending in New South Wales, mocked Adelaide as he pleaded for more money from his federal counterparts (pictured is the River Torrens and Adelaide Oval)

NSW and South Australia are both borrowing more money to pay for major infrastructure projects.

In Mr Perrottet’s case, he has pledged to spend a record $93billion over the next four years on new transport projects, hospitals and schools as part of ‘the largest infrastructure program in the state’s history’.

Of that, $32.2billion will fund public transport projects while another $23.4billion will be spent on roads.

Australia’s biggest state, however, is struggling with falling stamp duty revenue, as a result of Sydney’s median house price plunging by a record 17 per cent since July 2017.

The NSW Budget papers showed projected revenue from this property tax falling from $8.3billion to $6.9billion for 2019-20. 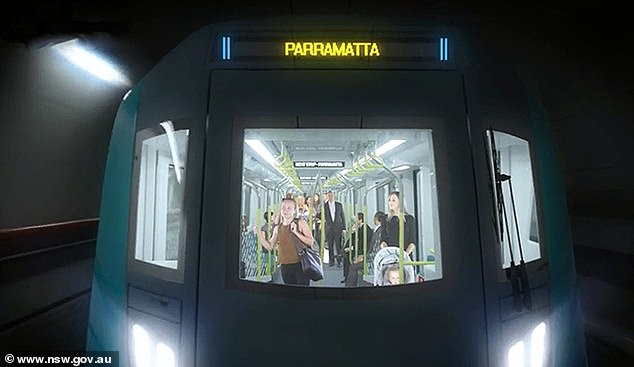 Mr Perrottet’s third Budget as the state’s Liberal Party Treasurer set aside $6.4billion for the Sydney Metro West (pictured is an artist’s impression of an underground driverless train) 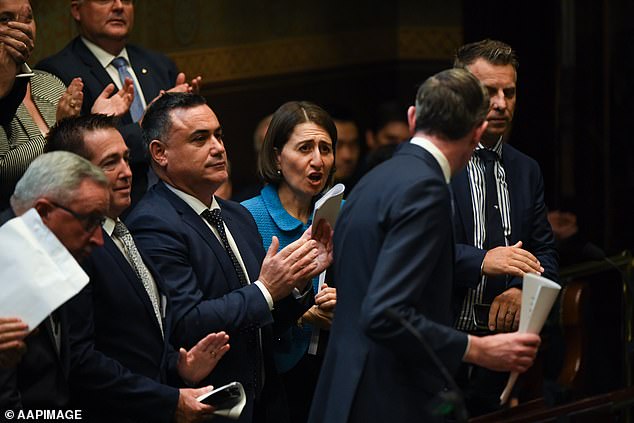 Property stamp duty accounts for eight per cent of the state’s $84.3billion in revenue.

The grim news was released as Australian Bureau of Statistics showed Sydney’s median house price had dived by 10.3 per cent in the year to the end of March to $847,000.

The NSW Budget, the ninth since the Coalition came to power in 2011, unveiled a surplus of $802million for 2018-19, which is smaller than the $1.4billion figure announced last year.

It is being delivered two months after Premier Gladys Berejiklian won a third consecutive term for the Liberal-National parties for the first time since 1971.

She had campaigned on a slogan, ‘NSW can have it all.’

The national economy, however, is growing at the slowest pace since the global financial crisis a decade ago, which is likely to affect the funds the states receive from commonwealth collection of the GST.