Nationals senator Sam McMahon has denied claims she was ‘trolleyed’ after she was helped out of Parliament, after colleagues anonymously claimed she was ‘intoxicated’.

Ms McMahon, 53, was escorted from a sitting of the federal Upper House in Canberra on Tuesday during a late-night sitting after colleagues allegedly said she was disorientated, barely awake and struggling to walk.

Reports say 10 senators, including some from the Coalition, claim the Northern Territory senator was ‘heavily intoxicated’.

Some added that she appeared ‘trolleyed’, ‘off her head’, ’embarrassing’ and ‘maggoted’, according to reports.

Vision shows her walking unsteadily across the floor after speaking to colleagues.

Senator Sam McMahon, 53, (pictured) was escorted from a sitting of the federal Upper House after colleagues allegedly said she was disorientated, barely awake and struggling to walk

One Coalition colleague told The Age: ‘I’ve never seen anything like it.’

Another added: ‘It was totally inappropriate.

‘This is a place of work, we all have a social drink from time to time but this was on another level.’

Footage from inside the chamber from around 10.45pm on Tuesday appeared to show the former veterinarian drinking from a water bottle alongside Nationals Senate leader Bridget McKenzie and Attorney-General Michaelia Cash.

The video shows her being directed across the chamber where she again sits down alongside Senator Cash and resumes drinking from her bottle before Nationals whip Perin Davey becomes involved. 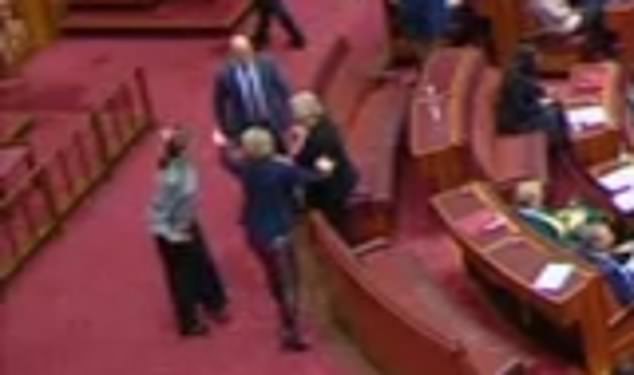 Senator McMahon is then seen being helped to her feet by Senator Cash before appearing to stumble on her way out of the chamber.

The Country Liberal MP sits with the Nationals in Parliament but is facing a preselection battle for her seat at the next election, just two years after she was first  elected to sit in Canberra.

Her fragile political future is said to have played a key role in the recent leadership coup which saw Michael McCormack replaced by returning Nationals leader Barnaby Joyce.

Mr McCormack is said not have shown sufficient support for Senator McMahon, which helped seal his downfall, while Mr Joyce is said to have a ‘very close relationship’ with the senator. 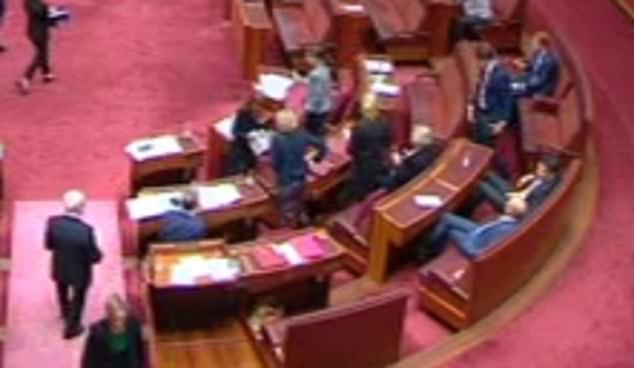 On Wednesday, Senator McMahon insisted she was not intoxicated, and told The Age the allegations were ‘incorrect’. She said she had only drunk one glass of wine.

Instead, she said, she had received ‘sad personal news’ that evening and had asked to leave the chamber because she was ‘not coping’.

The incident comes amid rising demands for an alcohol ban and breathtesting in Parliament following a series of scandals. 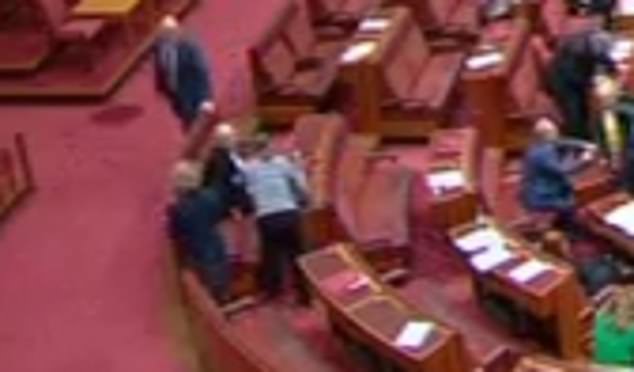 Senator McMahon (pictured above being shown the exit) insisted she had not been drunk on duty, and said the allegations were ‘incorrect’. She said she had only drunk one glass of wine

‘The Parliament is an unusual working place. It’s had long hours, it’s particularly intense and we have very important work to undertake,’ said Treasurer Josh Frydenburg in March in the wake of the Brittany Higgins rape allegations.