Maragret Thatcher refused to take a giant panda with her on a Concorde flight to the US, newly-declassified files reveal.

The act of ‘panda diplomacy’ was suggested to her by experts as a way of improving the special relationship.

Files show the then prime minister read the proposal with ‘amusement’ but responded: ‘I am not taking a panda with me.’

The bizarre case began when a Washington zoo with a fertile female panda requested the loan of London Zoo’s male panda so they could mate.

Mrs Thatcher’s Principal Private Secretary, Sir Clive Whitmore, wrote to her saying that it could be a demonstration of the ‘special relationship’.

‘The London Zoo are minded to agree to lend their panda,’ he wrote to her, suggesting that she bring the panda when she visited US President Ronald Reagan.

‘Lord Zuckerman [Secretary of London Zoo] sees this as a signal demonstration of the special relationship, and would be very happy to time the announcement of the loan of the delivery of the panda in any way that the Prime Minister thought would be most likely to benefit Anglo-American relations.

‘He even suggested that the Prime Minister might like to take the panda in the back of her Concorde, when she goes to Washington next month.’

Mrs Thatcher refused, adding that pandas and politicians were not ‘happy omens’ in the note from 1981.

Her Cabinet Secretary Sir Robert Armstrong replied to Sir Clive diplomatically: ‘The Prime Minister read your minute… with some interest and amusement. She has commented that she is not taking a panda with her.’

The pandas are not named, but the British panda is believed to be Chia-Chia, who arrived in the UK in 1974, while the US panda is thought to be Ling-Ling. 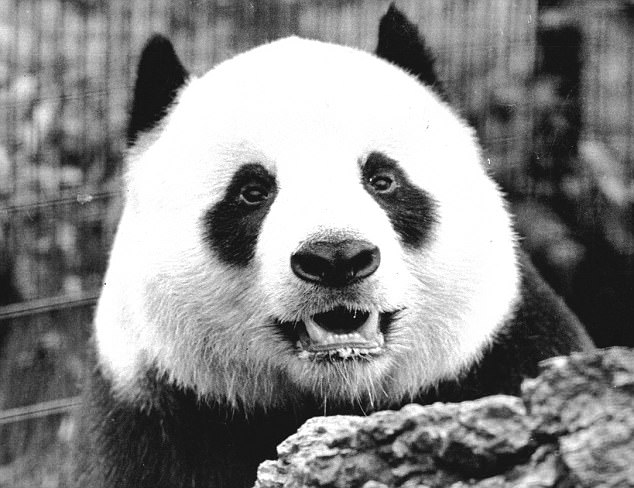 The pandas are not named, but the British panda is believed to be Chia-Chia (pictured), who arrived in the UK in 1974, while the US panda is thought to be Ling-Ling

Panda Diplomacy was a Chinese practice of presenting giant pandas to other nations to improve relations.

But in the 1970s, by a strange coincidence, any world leader who was given a pair of pandas by China fell from power.

The phenomenon, which was highlighted in a 1976 BBC film Very Important Pandas, revolved around the two aforementioned pandas.

US President Richard Nixon was brought down two years after being gifted Ling-Ling, while British Prime Minister Edward Heath was replaced by Mrs Thatcher after being sent Chia Chia.

A Japanese prime minister also lost power, as did a prince of the Netherlands. Mrs Thatcher was clearly unwilling to take her chances.