Number of Brits falling ill with Covid has dipped by another 10% in a week, symptom app shows

Britain’s Covid cases fell by a tenth last week, according to the country’s largest symptom-tracking study which has sparked fresh hopes restrictions will not be needed before Christmas.

King’s College London scientists estimated 65,059 people were falling ill with the virus on any day in the week to November 13, down from 72,546 previously.

It marked the third consecutive week that cases have trended down, and the lowest number of weekly infections since late September, before the back-to-school wave had truly kicked in.

Cases dipped among over-75s and levelled off for over-18s, the app suggested. But in children infections began to rise again after they returned to school following the half-term break.

Professor Tim Spector, the eminent scientist who leads the study, said he was ‘cautiously optimistic’ Christmas will be business as usual this year.

This was a softening in his tone from last month when he joined a chorus of experts calling on ministers to switch to Plan B — bringing back hated face masks, social distancing and work from home guidance.

Fears of another Christmas lockdown were sparked this week when Boris Johnson admitted that the drastic action was not completely off the cards at a Downing Street press conference. But the Prime Minister also said there was still nothing to suggest England needed to ramp up its Covid restrictions.

Britain’s daily Covid infections dropped yesterday week-on-week for the first time in seven days, and deaths and hospitalisations from the virus also fell.

King’s College London scientists estimated 65,059 people were falling ill with the virus on any given day in the week to November 13, down from 72,546 previously. This was a dip of 10% and down for the third week in a row 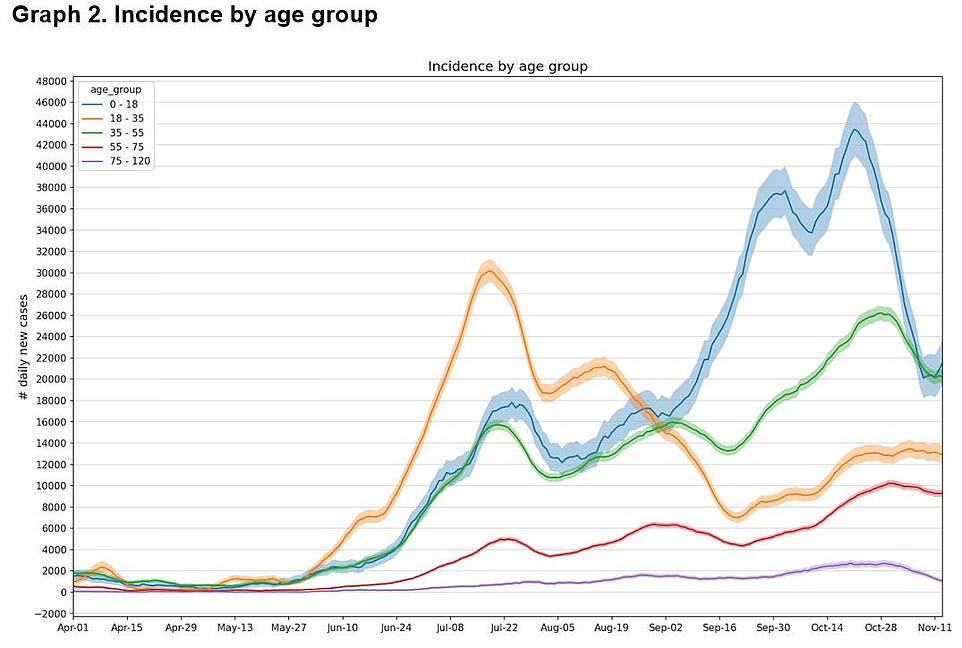 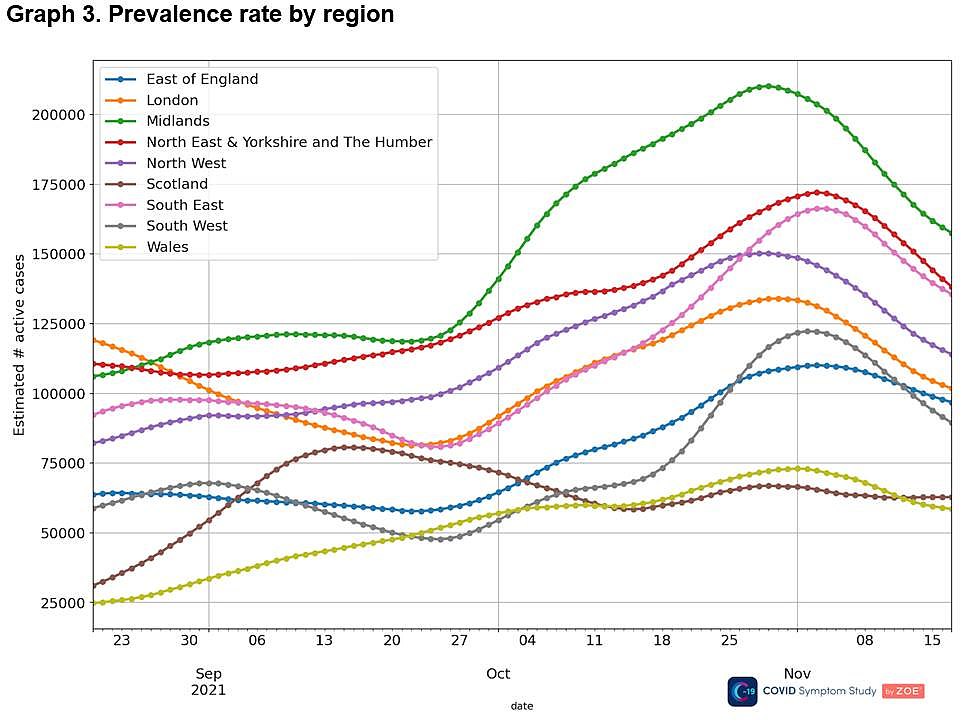 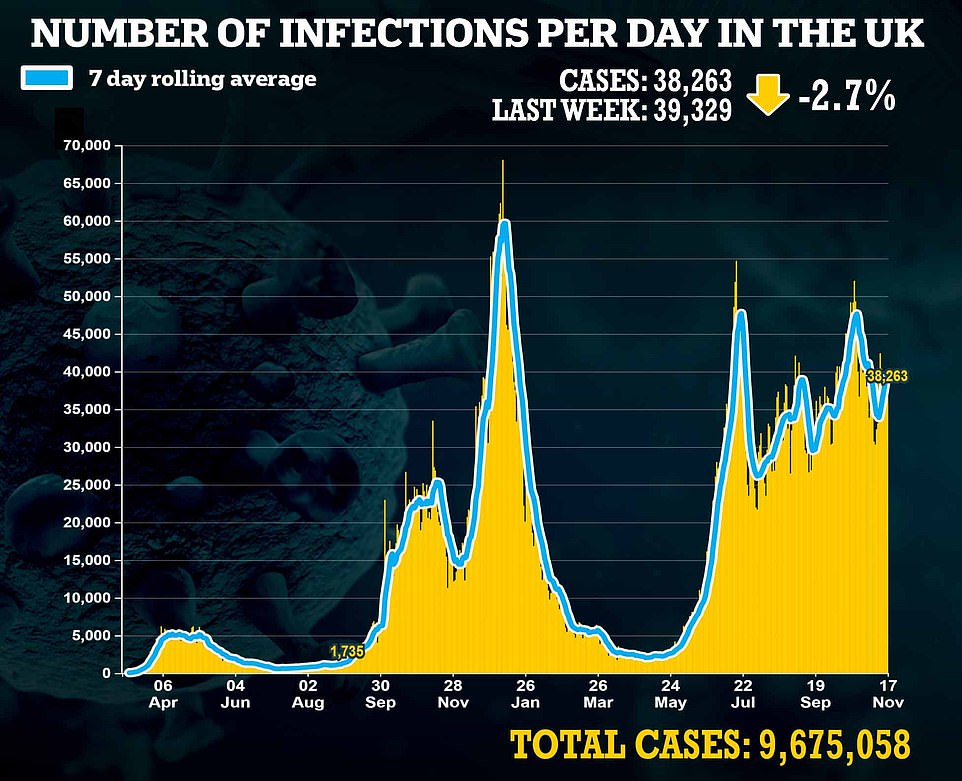 The symptom-study — also run by health data science company ZOE — relies on daily reports from more than 750,000 Britons on whether they are feeling unwell and if they test positive for Covid.

It is based on self-reporting and dose not ask participants to give evidence of their symptoms. The latest estimates used 40,000 tests for the virus over the fortnight to November 13.

Professor Spector sounded an optimistic note today, saying he felt Christmas would go ahead without any further restrictions being imposed.

Britain’s Covid cases FALL for first time in a week

Britain’s Covid crisis fell on all fronts yesterday, official statistics showed with cases dropping for the first time in a week.

Department of Health bosses posted 38,263 new infections over the last 24 hours, down 2.7 per cent on the 39,329 recorded last Wednesday.

It was the first time Britain’s cases fell week-on-week in the last seven days, after English children returned to schools at the start of the month.

Data also revealed 201 people died with the virus, down 6.1 per cent on the 214 recorded last week. It was the third day in a row the number of fatalities has fallen.

And the number of people being admitted to hospital with Covid fell 6.7 per cent to 778 last Friday, the latest date national data is available for.

Ireland has become the latest European country to reintroduce Covid curbs, forcing all hospitality businesses including nightclubs and pubs to close at midnight tomorrow.

Meanwhile, an Israeli study today revealed Covid immunity wanes within six months of Pfizer’s second vaccine no matter how old you are.

He said: ‘In terms of what it means for Christmas, I’m cautiously optimistic for the remainder of the year.

‘It’s becoming clear that children and the school holidays play a key role in the waves of infection.

‘I think it’s safe to say that we can expect to see another rise in the new year after the holidays.’

But he still called on all Britons to get fully vaccinated against the virus, as well as ensuring they have their booster doses.

And he urged everyone to start using face masks in crowded spaces such as public transport.

This was a softening of his tone from barely three weeks ago when he warned ministers should consider Plan B.

He said at the time: ‘The ZOE data shows the UK could hit 100,000 new cases sooner than expected and with no sign of a Plan B or Plan C.

‘With the UK government delaying any decision while hospitals fill up, it’s time to take matters into our own hands to address the worsening situation. Public action has worked in previous waves to reduce rates before lockdowns.’

Mr Johnson said earlier this week that it still was not possible to rule out some Covid restrictions being reimposed.

He told a Downing Street press conference: ‘Clearly we cannot rule anything out and the most important thing people can do to prevent further NPIs from being taken is to — non-pharmaceutical interventions that is, further restrictions — get the boosters.’

But he added there was still nothing in the data to suggest further restrictions were needed.

Scientists fear further Covid measures may be needed if a new variant emerges that is more transmissible and better able to dodge vaccine-triggered immunity.

Last winter the Kent ‘Alpha’ variant triggered a spike in Covid cases, leading to Christmas day plans being shelved and another lockdown.

But this was before the vast majority of the country had been vaccinated against the disease.

Ministers have rolled out booster shots to the over-50s to top up their immunity against the virus, after data showed that it wanes six months after the second dose.

This week the drive was also expanded to over-40s, who will now be able to get a third shot from six months after their second dose.

Official data shows more than half of over-50s have already got their top up jabs, while among the over-80s this rises to 77 per cent.

Professor Spector also warned officials would need to keep an eye on the virus for another five years, raising the possibility of more restrictions possibly being introduced for years to come.

And tomorrow the Office for National Statistics will also publish its surveillance report, which is watched closely by ministers and seen as the gold standard for tracking the pandemic. 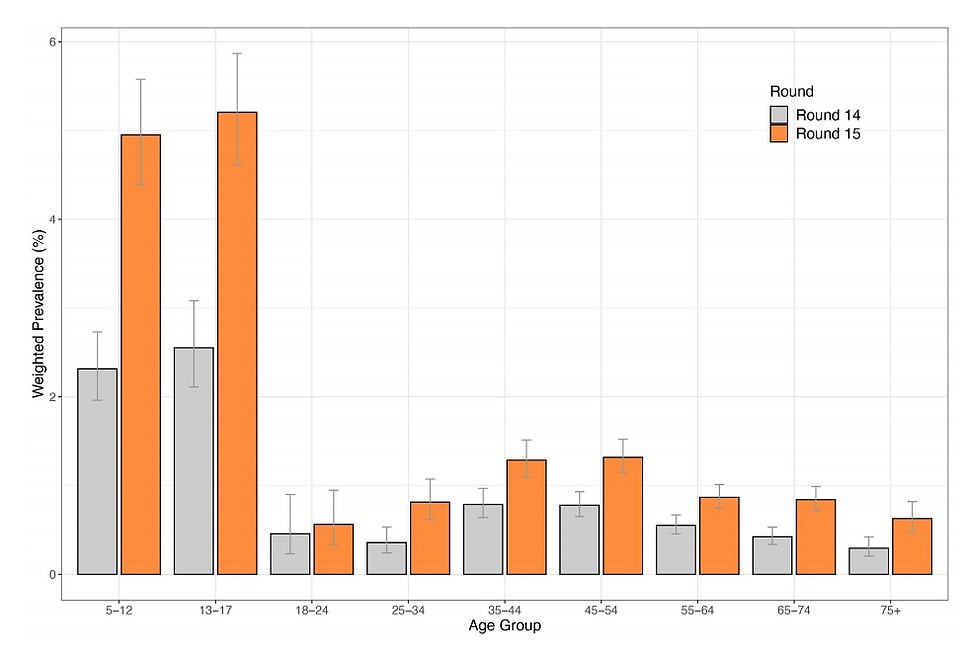 Graph shows: The proportion of people who were infected with Covid between October 19 and November 5 (orange bar) compared to between September 9 and 27 (grey bar) in different age groups 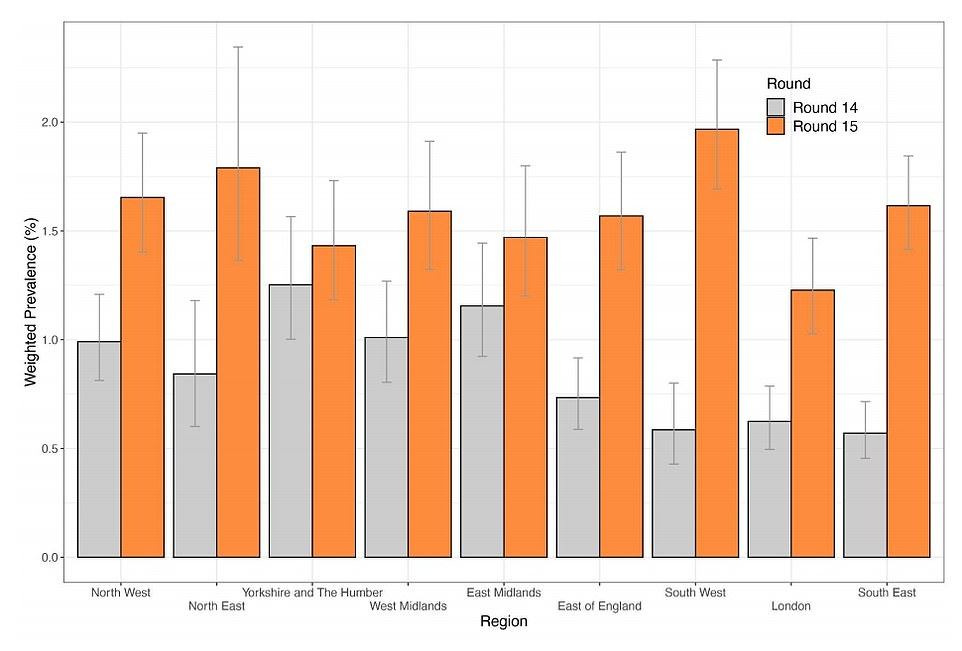 Graph shows: The proportion of people who were infected with Covid between October 19 and November 5 (orange bar) compared to between September 9 and 27 (grey bar) in different regions in England 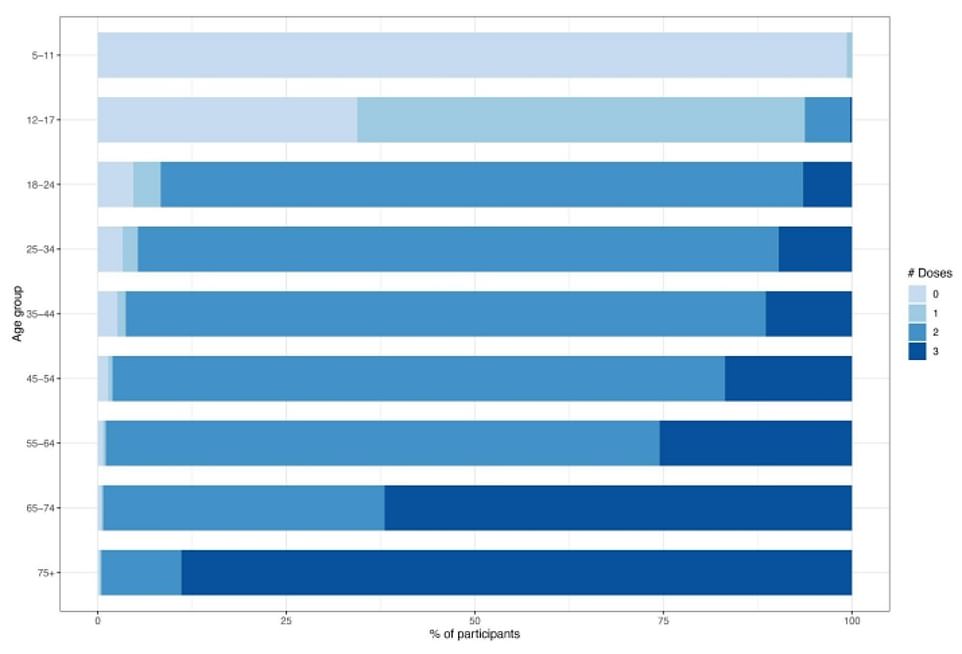 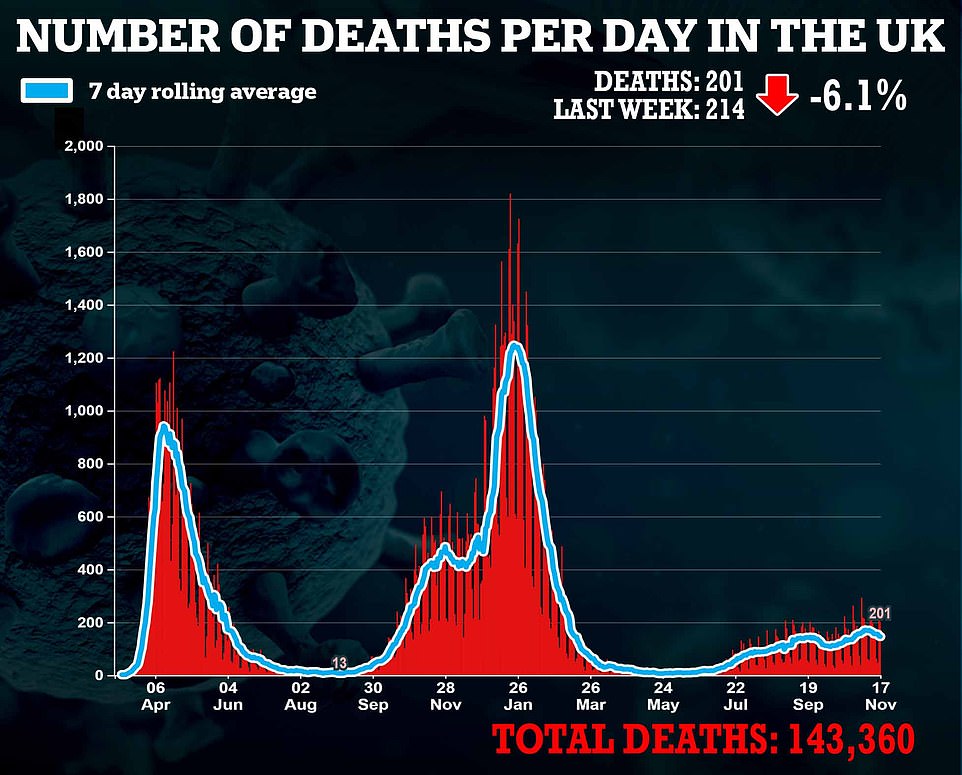 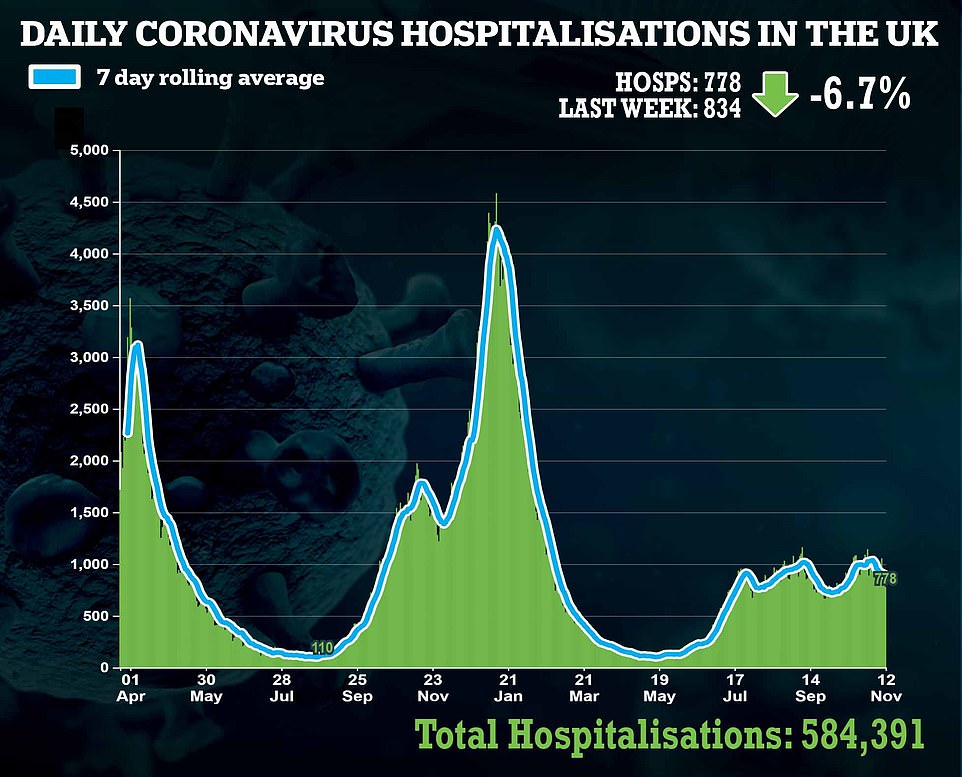 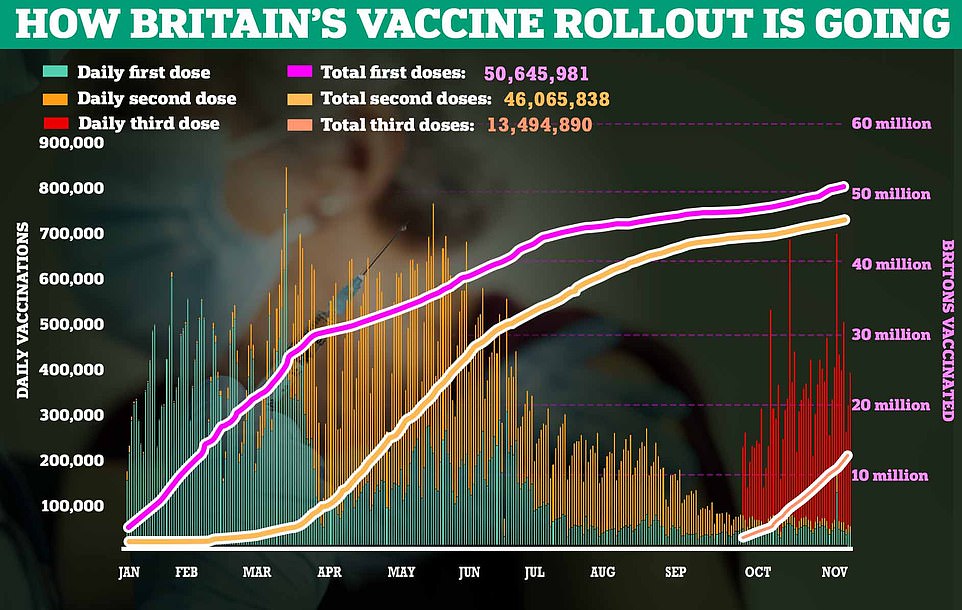 It comes after a mass surveillance study claimed yesterday that Covid booster jabs reduce the risk of infection by two thirds compared to those who are double-jabbed.

Data from the REACT study — which randomly tested more than 100,000 people up between October 19 and November 5 — found the third doses triggered a significant boost to immunity.

Of the more than 8,300 people studied who had been given a booster, just 30 (0.36 per cent) became infected after immunity kicked in at two weeks.

After adjusting for age and other factors, the Imperial College London researchers said this meant the odds of breakthrough infection was cut by two-thirds.

Professor Paul Elliot, an epidemiologist who led the study, said the findings were significant because they showed boosters are ‘highly effective’.

ONS data today suggested people with a Covid booster only have a one in five chance of catching Covid compared to the unvaccinated.