Britain today announced 155 more coronavirus deaths as an array of official statistics confirmed the outbreak is continuing to tail off for now.

Department of Health figures show the number of daily fatalities has dropped 10 per cent in a week — down from the 171 recorded last Tuesday. Only 25 deaths were posted yesterday but tolls on Mondays are always much lower because of a recording delay at weekends.

It means the official laboratory-confirmed death toll now stands at 43,730. However, the real number of victims is thought to be in the region of 55,000 when all suspected deaths are taken into account.

Government statistics also show 689 more Britons have tested positive for the disease, meaning the rolling seven-day average of new cases (867) has dropped to the lowest levels since lockdown — the average was 730 on March 23, when the unprecedented measures were imposed.

Separate data released today revealed the number of people dying each week in England and Wales has dropped below average for the first time since the coronavirus crisis spiralled out of control.

Data released by the Office for National Statistics (ONS) today showed 9,339 people died of any cause in the week ending June 19 — down from an average of 9,404 for the same week over the past five years. 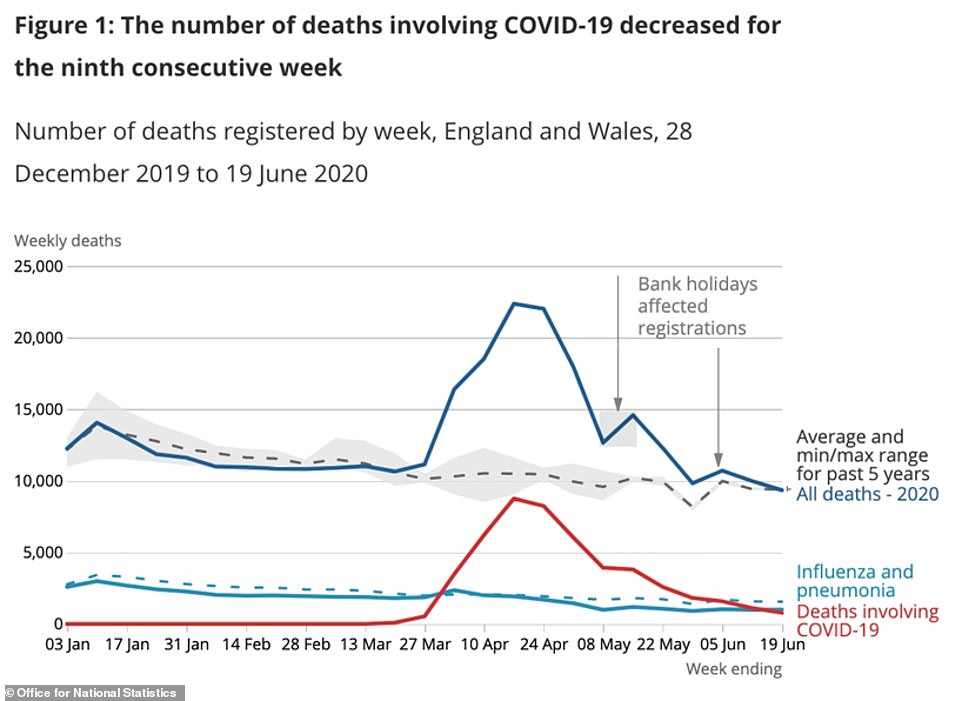 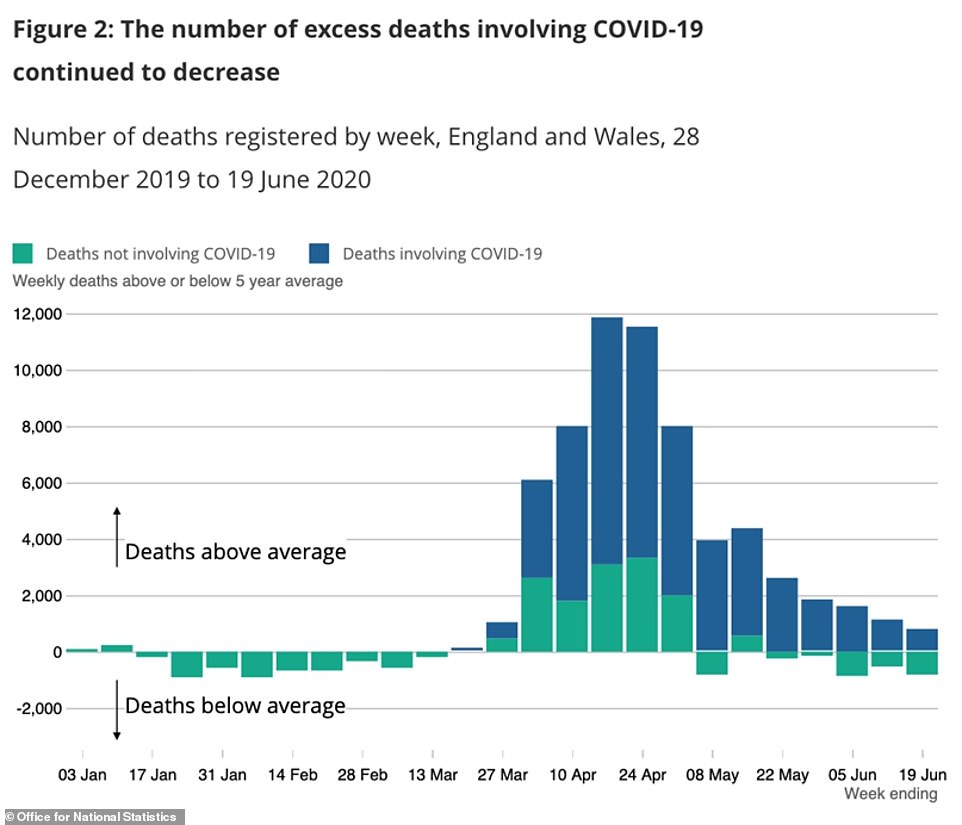 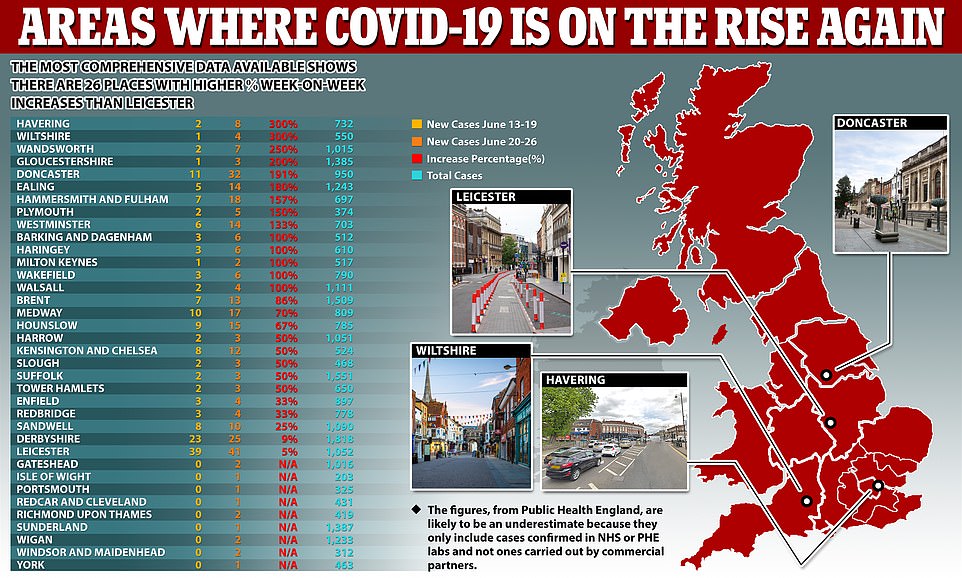 Data compiled by Public Health England (PHE) shows Havering and Wiltshire have seen the biggest week-on-week increases in confirmed Covid-19 infections (300 per cent). In comparison, Leicester has recorded a 5 per cent jump in cases – going from 39 cases registered between June 13-19 to 41 in the following seven-day spell 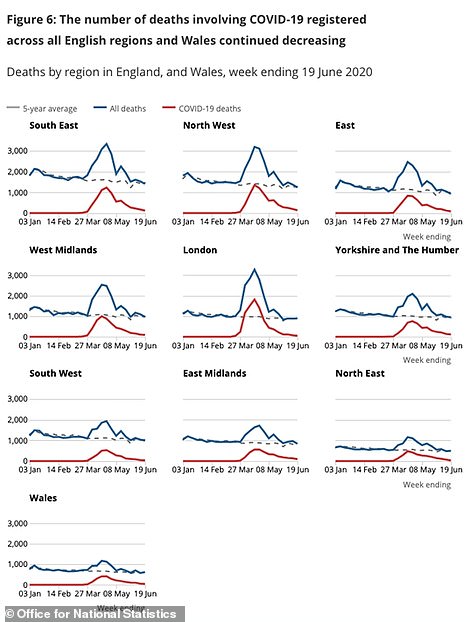 In the week ending June 19 deaths were lower than average in the East, South East, North West and South West of England, about average in the Midlands, and above average in other regions and Wales, the ONS data shows (Pictured: Average is shown by dotted lines, real deaths by the blue line and coronavirus deaths the red line)

Department of Health figures released today showed 93,881 tests were carried out or posted yesterday. The number — the lowest for a fortnight — includes antibody tests for frontline NHS and care workers.

Health chiefs also reported 815 more cases of Covid-19. Government statistics show the official size of the UK’s  outbreak now stands at 311,965 cases. But the actual size of the outbreak is estimated to be in the millions, based on antibody testing data.

NHS England today posted 37 deaths in hospitals across the country. Wales recorded three Covid-19 fatalities in all settings and none were declared in Northern Ireland. Scotland registered three deaths, ending its four-day spell without any coronavirus fatalities.

Separate ONS data released today showed the week up to June 19 saw the lowest coronavirus death count in 13 weeks in England and Wales.

Department of Health’s latest death count for all settings stands at 43,575, as of June 29.

This only counts people who have been officially tested for Covid-19 and diagnosed by the Department of Health.

Data from the Office for National Statistics shows 49,610 people had died and had Covid-19 mentioned on their death certificate in England and Wales by June 19. This includes people who were tested and also those not officially diagnosed.

Matching data from Scotland (National Records of Scotland) shows 4,119 people had been killed there by coronavirus up to June 21, while Northern Ireland (Northern Ireland Statistics and Research Agency) recorded 812 up to June 19.

These are more accurate than the Department of Health’s count but are 10 days out of date because it takes so long to process death certificates.

The total number of excess deaths has passed 65,000.

The number of deaths halved in the space of just three weeks, with 623 more victims confirmed — down from 915 a week earlier and 1,279 by June 5.

In total, the ONS says 49,610 people had died and had Covid-19 mentioned on their death certificate by June 19. This includes people who were tested and also those not officially diagnosed by a doctor.

Matching data from Scotland shows 4,119 people had been killed north of the border by coronavirus up to June 21, while Northern Ireland recorded 812 up to June 19.

The total death toll in the UK, therefore, was at least 54,541 by mid-June, considerably higher than the 42,632 recorded by the Department of Health by June 21 (a 28 per cent increase).

Although people are still dying of coronavirus, fewer deaths from other causes has cancelled them out and the total is now lower than would be expected.

Fatalities are now lower than average in both hospitals and care homes, but remain high in people’s private homes, with 827 more people than usual dying at home in the third week of June.

Experts say many of these people are likely those with terminal illnesses who would normally die in hospital, such as cancer patients.

ONS data released today also showed four regions of England saw fewer deaths than average in the week from June 13 to 19, which is the most recent data from the ONS.

East of England was furthest below average, with 6.8 per cent fewer fatalities than usual, followed by the South East (3.8 per cent), North West (3.7 per cent) and South West (3.5 per cent).

West Midlands had just one death more than it would expect to see in an average year (0.1 per cent).

Wales was continuing to see the most excess fatalities, with 7.7 per cent more people than usual dying in that week — a total of 44 more than the average 573.

Today’s data shows the health impact of Covid-19 is continuing to shrink but there are still hundreds of people dying every week as lockdown begins to lift.

The latest figures do take into account any changes that might have happened as a result of people being allowed to spend unlimited amounts of time outside – which doesn’t appear to have affected the death rate.

It may be too soon, however, to show any changes triggered by rules allowing people to meet in groups of six, or of high street shops reopening.

Both those measures began in June and statisticians say it takes three weeks or more for trends to emerge in data because it can take that long for people to die after catching Covid-19.

But today’s promising data on deaths adds to growing evidence that the virus is, on the whole, retreating in Britain.

The ONS said only around one in 1,700 people now have the illness and that ‘the number of people in England testing positive has decreased since the study began on 26 April’. It added, however, that the decline appears to have slowed recently as lockdown measures have loosened.

Today’s release showed that the North West — the region around Liverpool, Manchester and Cumbria — has experienced the most coronavirus deaths in England and Wales for four weeks running.

The North West, where there were 127 coronavirus fatalities between June 13 and 19, was the only region to still record more than 100 deaths in a week. Closest behind it was the South East with 88.

On average, Covid-19 victims now account for one in every 12 people (8.4 per cent) who die across England and Wales. 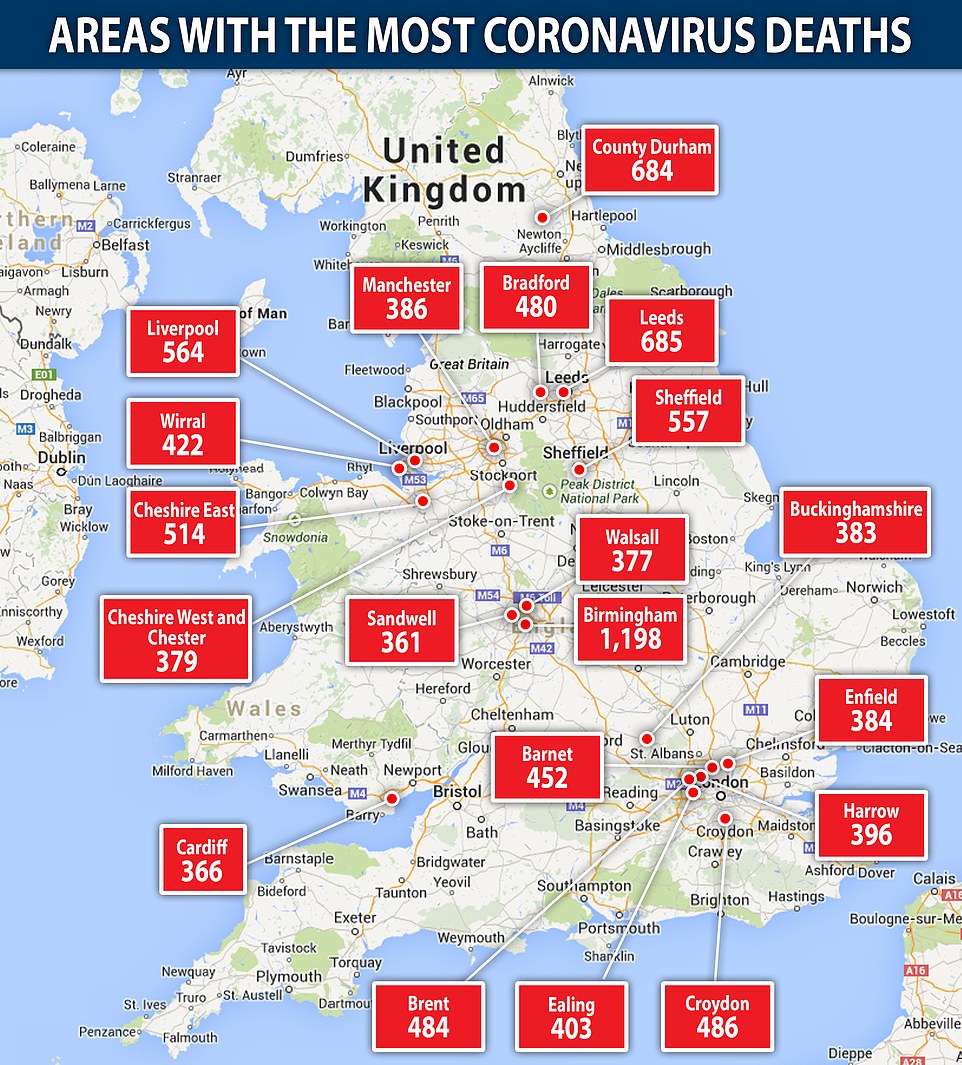 The data comes as England prepares to go through the biggest easing of lockdown rules so far this weekend, with pubs and cafes allowed to reopen and people permitted to mix with other households and stay overnight outside of their own homes.

Cases diagnosed through the Government’s testing programme are continuing to fall — from a weekly average of 1,205 last Monday to 894 in the seven days to yesterday.

But the threat of another surge remains real — Leicester will not be allowed to lift its lockdown on Saturday and must close schools and non-essential high street shops again, the Government announced last night.

The streets of the city centre were deserted this morning as Mr Hancock confirmed that police will be enforcing the curbs, vowing to push through laws to bolster their powers.

But he hinted that there will be no extra compensation for businesses, and faced a backlash after admitting there will be no ban on cars or trains into the city. The boundaries of the restrictions were only revealed this morning, adding to the sense of chaos. Villages outside of the city centre also face an extended lockdown.

There is also anger that action was not taken sooner, with complaints that ministers kept local authorities in the dark for more than a week after identifying a worrying spike in cases.

In a round of interviews intended to reassure an anxious public this morning, Mr Hancock said the government was mobilising its strategy for crushing localised outbreaks – dubbed ‘whack a mole’ by Boris Johnson.

‘It’s so important that we get a grip on this spike that has happened in Leicester. We will be closing the shops by law and will be changing the law in the next day or two to do that,’ he told BBC Breakfast.

WHERE HAS HAD THE MOST CORONAVIRUS DEATHS?

WHERE HAS HAD THE FEWEST CORONAVIRUS DEATHS? 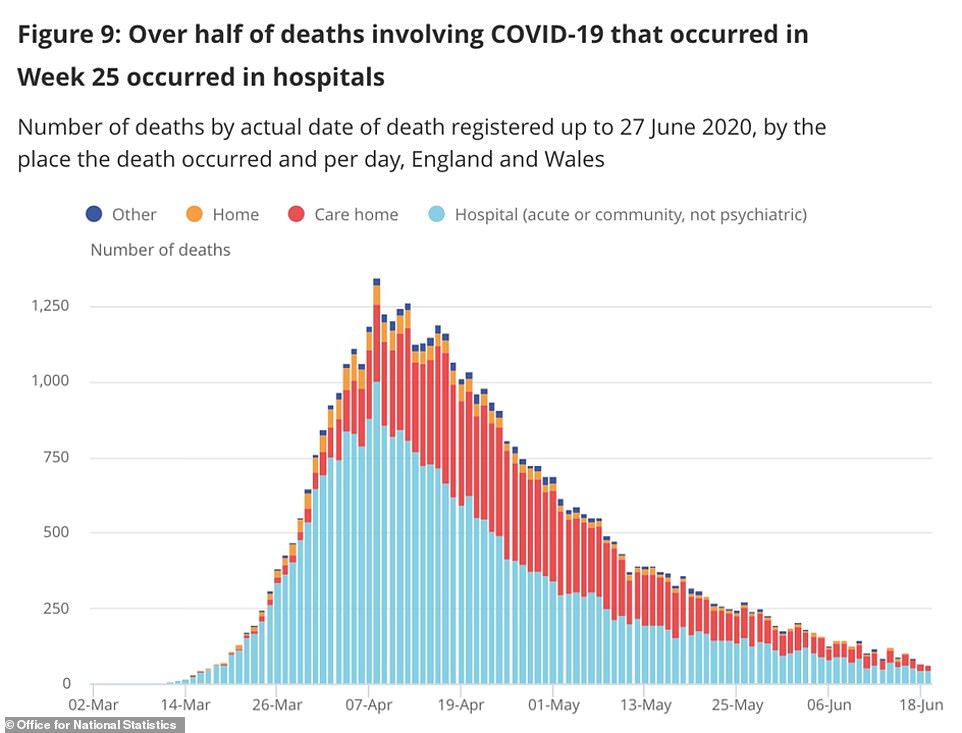 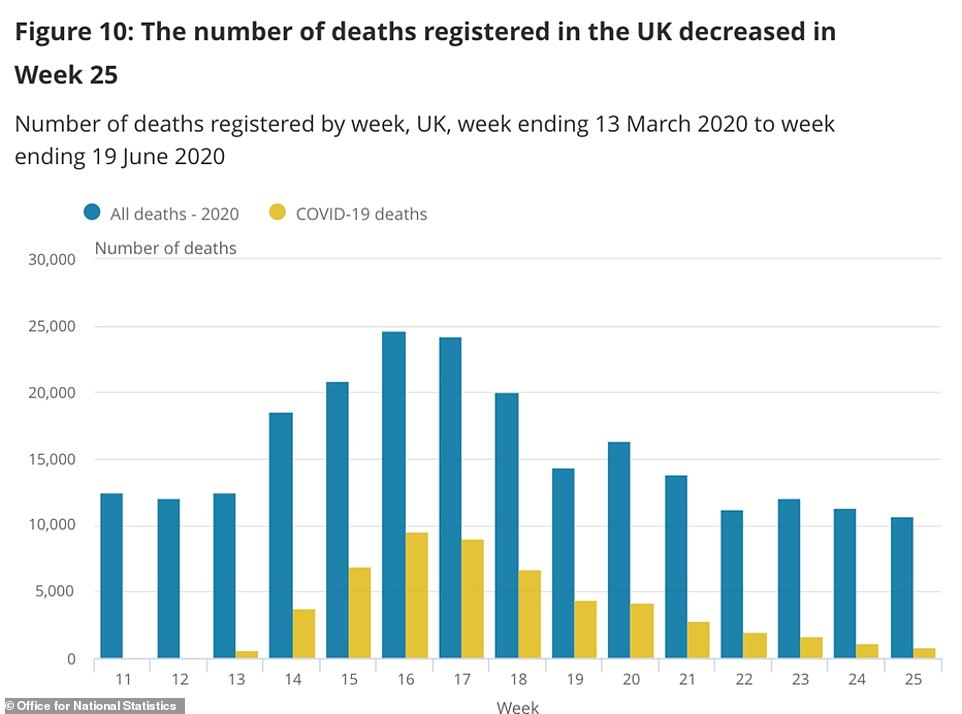 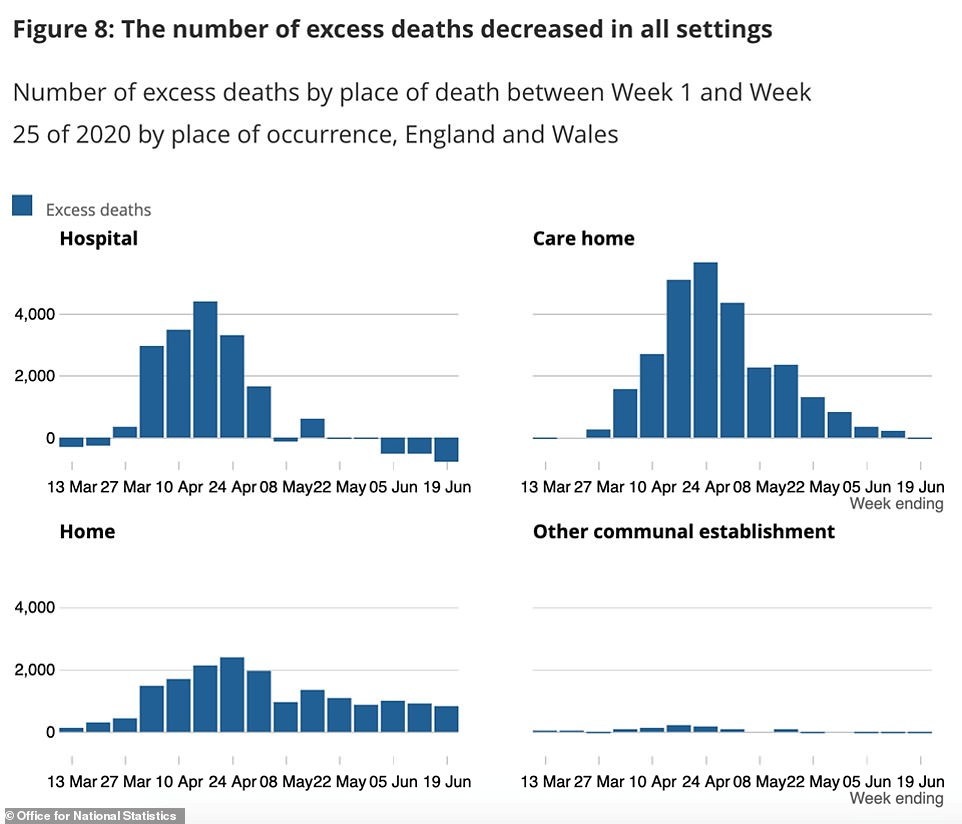 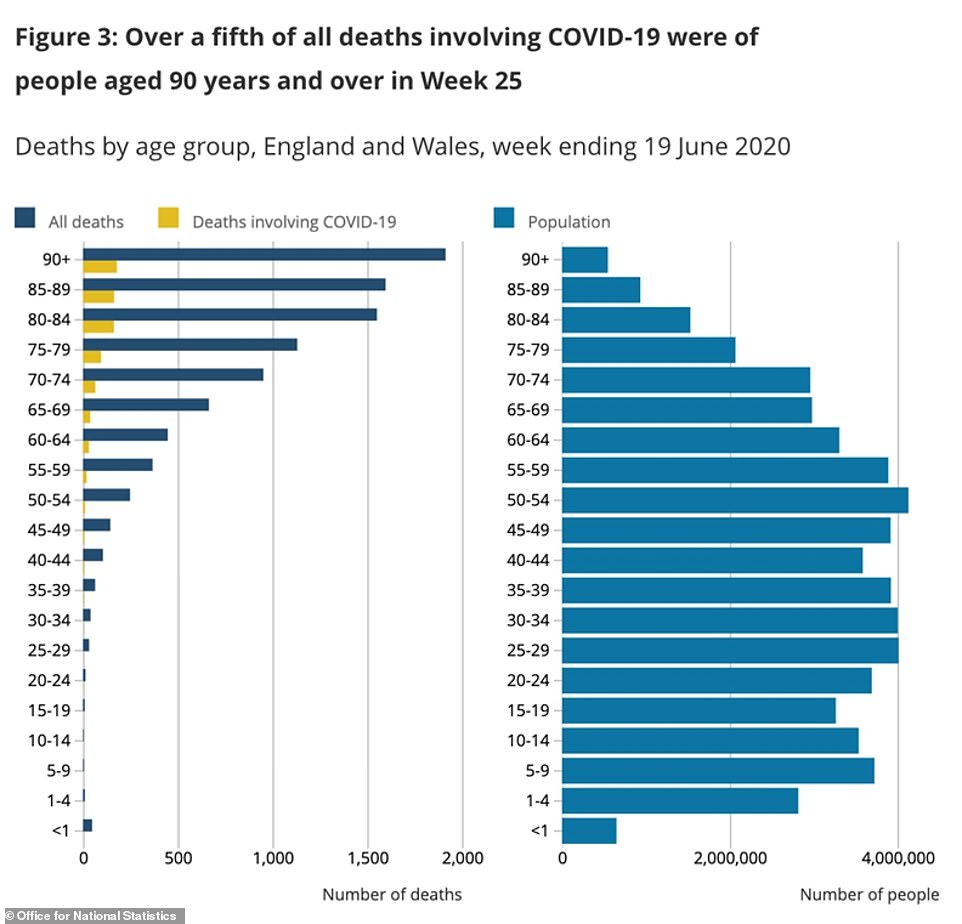 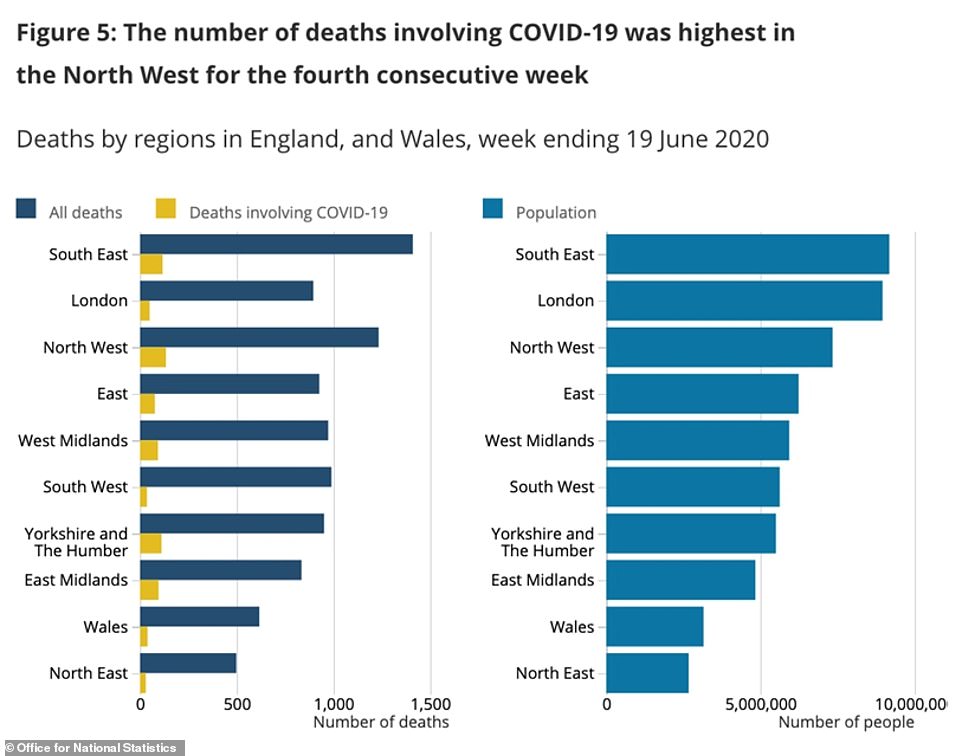 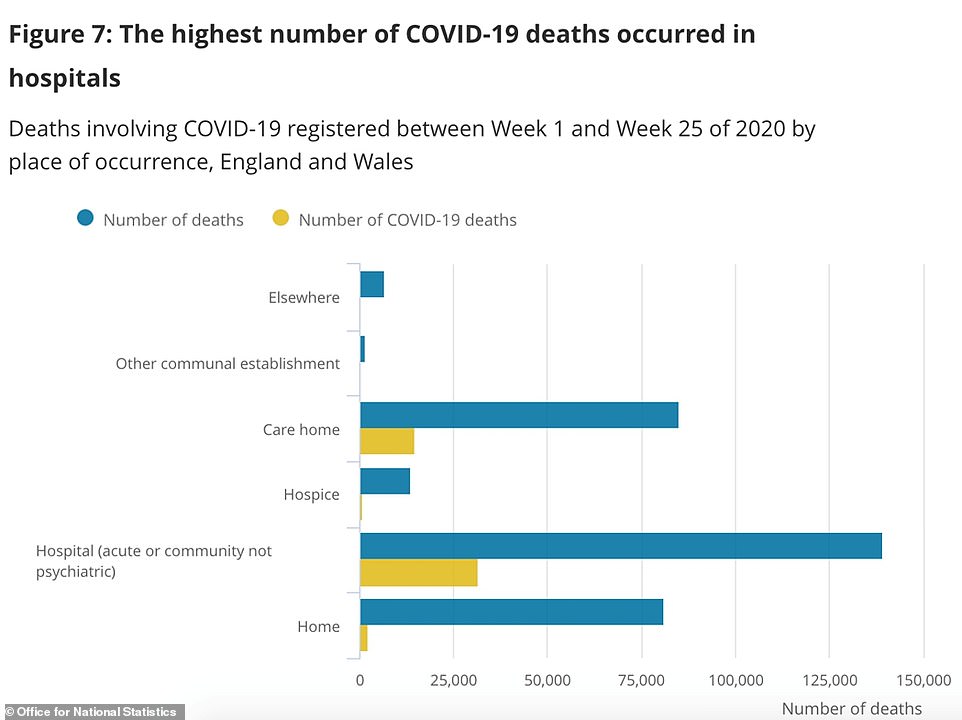 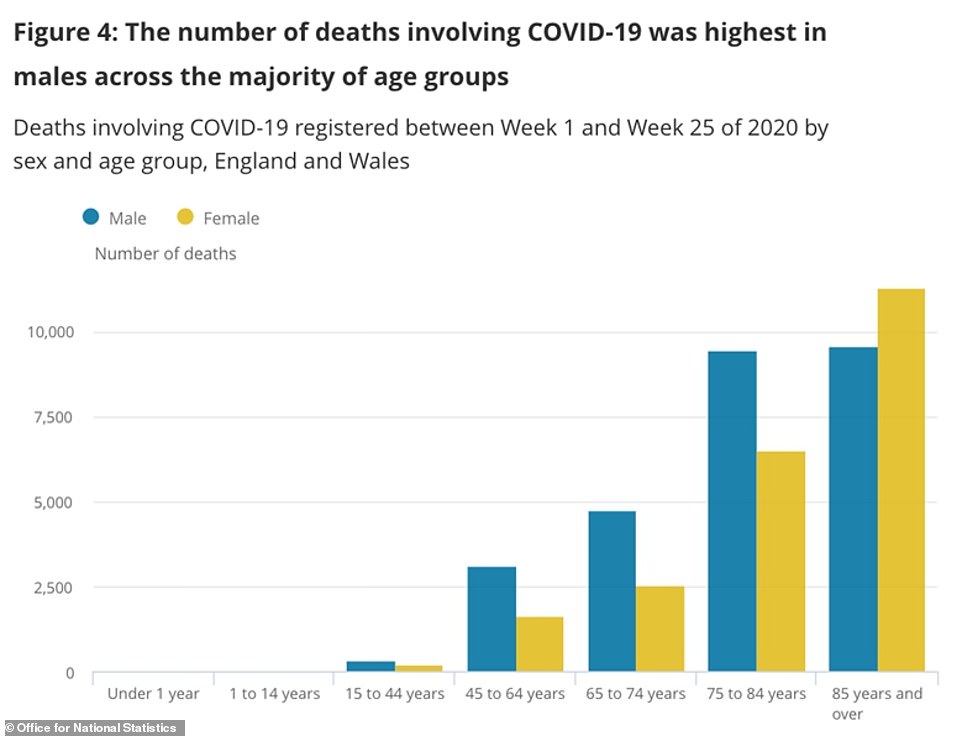