The proportion of people who think Brexit is a mistake has soared to a new high of 49 per cent as Theresa May’s deal is plunged into chaos.

That figure is just one percent higher than the 48 per cent of people who voted to Remain in the EU at the 2016 Brexit referendum.

The new poll also found that the number who support the PM’s deal has also dipped – falling from 27 per cent last week to 23 per cent now.

The findings, in a YouGov poll commissioned by The Times, is a fresh blow for Mrs May as she is reeling from her humiliating triple defeat in the Commons last night.

In a torrid 63 minutes for No10, Tory rebels joined Labour to vote for an amendment  to give MPs the power to tell ministers what to do if the PM’s deal is rejected next week.

And MPs also voted to hold ministers in contempt of Parliament for the first time in modern history.

The humiliating defeats have left Mrs May’s Brexit plan and her premiership hanging by a thread.

But in a rare glimmer of good news for her, the survey – carried out yesterday and Monday – found Mrs May still outpolls Jeremy Corbyn when voters are asked who would be the best PM.

And with less than a week to go until MPs hold their crunch vote on the PM’s Brexit deal, the poll shows that support for her agreement has also slipped.

Just 23 percent say they support the PM’s deal – down from 27 percent last week.

While the proportion who oppose it has remained pretty steady – up to 46 per cent from  last week’s 45 per cent.

The news is a blow for Mrs May, who has been travelling the breadth of the UK and appealing over the heads of her squabbling MPs to sell her deal to the country.

But while Mrs May’s Brexit plans have been plunged into chaos, Labour leader Jeremy Corbyn has failed to capitalise on the disarray.

The poll found that 35 per cent of voters think Mrs May makes the best PM – far higher than the 24 per cent who backed Mr Corbyn. 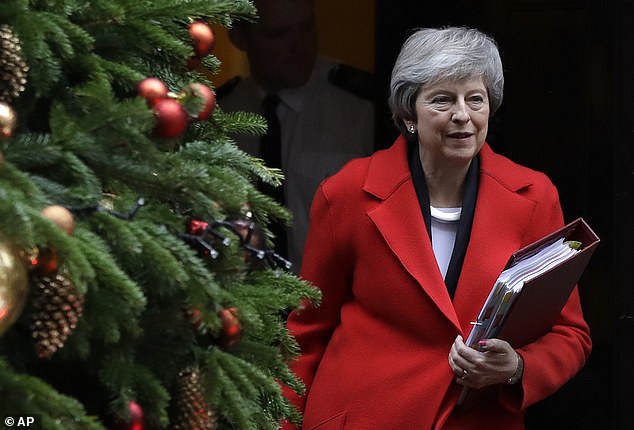 But both politicians were still outpolled by ‘don’t know’ which had the backing of 37 per cent of those surveyed.

The poll comes as  Liam Fox today warned that Remainer MPs may try to ‘steal Brexit’ from the British people in an affront to democracy.

The International Trade Secretary scrambled to try to defended Mrs May’s  deal after last night’s humiliating defeats as he was quizzed by the international trade select committee.

He said: ‘I think there is a real danger, given the House of Commons which has a Remain majority, may attempt to steal Brexit from the British people, which I think would be a democratic affront.’