The number of people in England and Wales with guarantor loan debts heading to Citizens Advice has doubled in just two years, with more than 3,000 in 2019 seeking help from the charity.

The dramatic rise raises concerns that guarantor lenders – which charge interest rates as high as 50 per cent on borrowing – are increasingly filling the void left by the collapse of payday lender Wonga, which went bust last year.

The charity’s figures were released ahead of a Panorama documentary tonight looking at high-cost credit in the UK, with one person telling the BBC investigative programme she ended up paying back more than £23,000 on an original loan of £10,000.

Emma, left, told Panorama how she ended up having to repay more than double the £10,000 she borrowed from Amigo Loans in four instalments – £5,000 of which was to pay back debt

Guarantor loans are usually marketed at those with a bad credit history or who have been turned down by other lenders, with the loan underwritten by a family member or friend who agrees to pay back the loan if they can’t.

Being liable for this debt means borrowing from guarantor lenders can pose significant risks for guarantors, with Citizens Advice saying 50 per cent of those who came for help with guarantor debts had an issue with guarantor liability.

High interest rates also pose huge issues for those who borrow the money in the first place.

One person who went to Citizens Advice for help, Emma, told the Panorama programme how she was left paying back more than £23,000 over the life of a five-year loan, more than double the £10,000 she had borrowed.

In 2017, having already borrowed £8,500 from Amigo Loans, the UK’s largest guarantor lender, Emma applied for what was her fourth Amigo loan, in order to book a holiday.

At that point she was still making repayments of nearly £200 a month, and half of the £10,000 she ended up borrowing was in order to pay off existing debt. 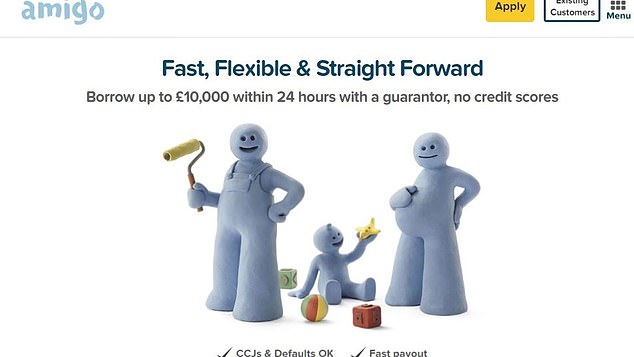 Amigo Loans is the biggest name in the UK guarantor market and offers loans with an APR of 49.9%

She told the BBC: ‘It was quite simple really, I had a guarantor and we both filled in the paperwork and I think within 24 hours the money was paid out.’

If you borrowed £2,000 with Amigo over 36 months, you would end up repaying over £1,500 in interest thanks to a 49.9 per cent APR, meaning you’d pay back nearly twice the amount you’d borrowed.

Amigo Loans is a FTSE-250 listed company that made its founder James Benamor a huge windfall when it went public last summer.

Amigo says it goes through a strict vetting procedure before lending money, including ‘affordability assessments.’

Both Emma and her guarantor ‘completed’ these, demonstrating they were able to make the monthly repayments.

Separate statistics provided to This is Money by StepChange Debt Charity showed a similar trend to Citizens Advice.

It added that the percentage of clients’ debt that was from guarantor loans had risen to 36.3 per cent in 2018, up from 29.9 per cent two years before.

Peter Tutton, the charity’s head of policy, said: ‘Since 2012, the likelihood of a client having a guarantor loan at the time they seek our help has risen significantly.

He adds: ‘Although the FCA has taken steps to ensure that those who act as guarantors have some protection from unaffordable collection practices by lenders, the rise in guarantor loans as a component of problem debt does mean that the regulator needs to keep a close eye on where this small but growing part of the market may be creating problems for consumers — whether they are the original borrower or the guarantor.’

Stella Creasy, the Labour MP for Walthamstow who led the campaign that resulted in the FCA changing the rules on payday loans and arguably helped put the nail in Wonga’s coffin, told This is Money regulators needed to go further and cap ‘all forms of credit’. 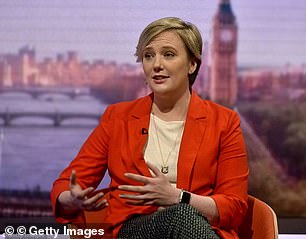 Stella Creasy, the Labour MP who led a campaign against payday loans, said regulators needed to cap all forms of high-cost credit

She said: ‘There’s a growing army of guarantor lenders filling the gap left by the payday loan industry who we have been warning the Government about and who are targeting cash strapped Britons.

‘Companies like Vanquis and Amigo target those in need and hook them into a spiral of debt.

‘We urgently need to stop this before we see the next Wonga style scandal and cap all forms of credit so there isn’t a loophole these companies can exploit to get around existing regulation.’

In a separate letter to economic secretary to the treasury John Glen this April, she expressed surprise Amigo’s business model had been deemed acceptable by the FCA, ‘as it clearly does not treat customers fairly.’

Amigo has a large slice of the guarantor loan market in Britain, but many others exist.

These include the likes of Buddy Loans, TFS Loans, George Banco and Talk Loans.

However, interviewed in the Panorama documentary, John Glen rejected the suggestion that banning the likes of Amigo would work.

He said: ‘The treasury sets the legal framework. The Financial Conduct Authority looks at what is happening in the market and has enormous powers which they use to curtail practices that are damaging to the consumer.

‘But what I don’t agree with, and it’s said by some that what you should do, is just ban everything. I don’t believe that I, as a minister in Whitehall, should sit and just ban vast sectors of provision for credit.

‘What I need to do is to look at ways of expanding more affordable credit options.’

The FCA told the BBC they are continuously monitoring the consumer credit market, taking action where they have seen issues.

Amigo told This is Money that only 13 per cent of loan applications were accepted, and that over 90 per cent of repayments were made by borrowers.

A spokesperson for the lender said: ‘Amigo is not a high-cost-short-term lender.

‘Our APR is similar to that charged by credit-unions, who also provide a mid-cost product.