By James Burton For The Daily Mail and Simon Lambert for Thisismoney.co.uk

The number of young adults owning a home has plummeted by a third in a decade, official figures reveal today.

Only 38 per cent of 25-to 34-year-olds have stepped on the property ladder now, down from around 55 per cent ten years ago.

The proportion who are private renters has surged from 28 per cent to 44 per cent.

Critics say the collapse in home ownership shows a whole generation of millennials could be giving up on the dream of having a place of their own. 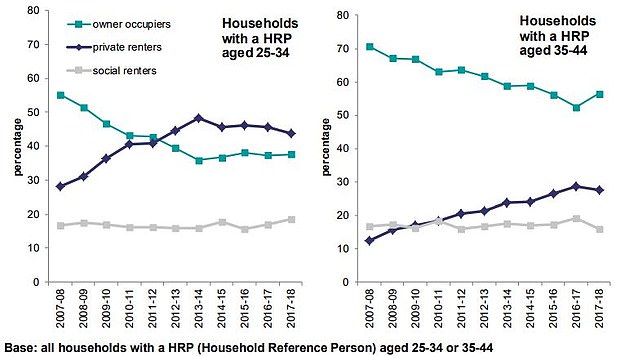 The chart from the English Housing Survey shows how households with 25 to 34-year-olds as the main resident that own their home have declined dramatically over the past decade, left, whereas there has been an uptick among the next generation up, right.

They fear the statistics, revealed in a survey by the Department for Housing, Communities and Local Government, mark the end of the property-owning democracy championed by Margaret Thatcher in the 1980s.

Robert Colvile, of the Centre for Policy Studies, said: ‘Our failure to build enough houses – which stretches back decades – means that house prices have grown and grown.

‘In the process, home ownership has become an increasingly distant prospect for an entire generation.

People want, need and deserve homes of their own. The Government needs to strain every sinew to fix the housing market and revive home ownership.’ 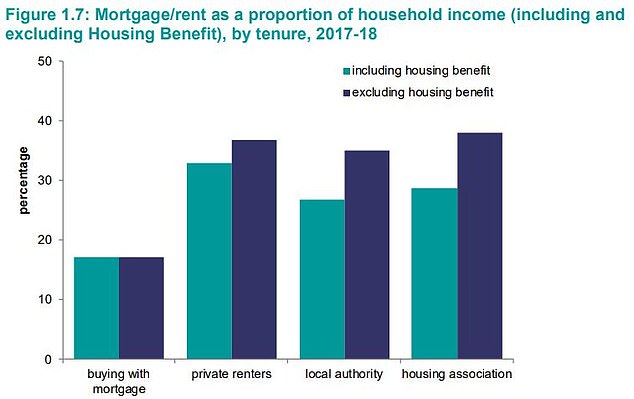 The decline in home ownership among the young has been largely blamed on high house prices making it hard to raise a deposit and borrow enough to buy, because low mortgage rates mean that owner occupiers pay less as a percentage of their income than renters

The English Housing Survey also reveals that the average first-time buyer was 33 in 2017-18, up from 31 ten years earlier, and 64 per cent of the population now own a home, compared with 71 per cent in 2003.

Young families stuck in rental accommodation typically pay much more in rent than a mortgage for the same home would cost, making it even harder to save for a deposit.

Those who do venture on to the property ladder are going to increasingly desperate lengths with an unprecedented 56 per cent borrowing more than three times their salary to get on the ladder. Millions are taking out 35-year mortgages to afford the cost.

More than a third of all mortgages are now for longer than 30 years, compared with only 20 per cent in 2007, according to the Financial Conduct Authority.

Around 40 per cent of buyers who took out a mortgage in 2017 will still be paying it off when they are 65. 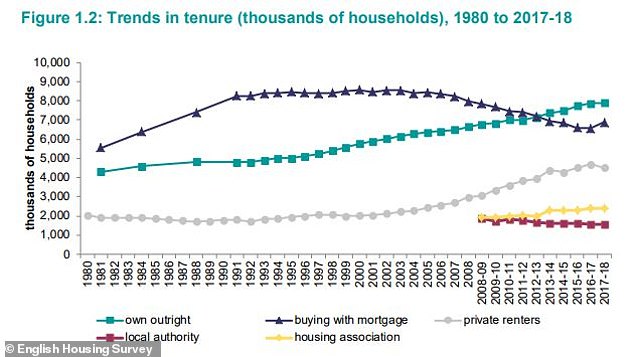 The number of people who own their own home outright has overtaken those with a mortgage in recent years, as those who own a property mortgage-free tend to be older this is another sign that younger buyers are unable to get on the property ladder 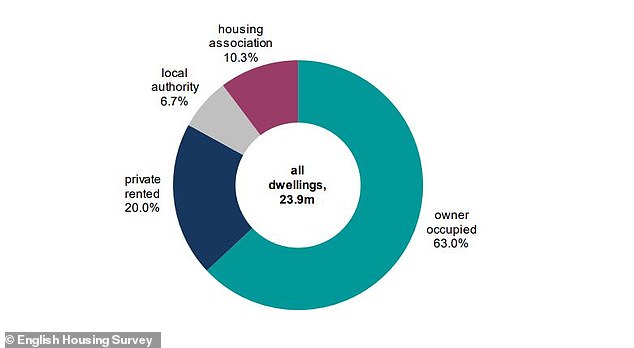 Despite the decline in home ownership among the young, owner occupiers remain the largest chunk of the English housing market at 63%, with private renters the next largest at 20%

How people are moving

The housing survey showed how people are making their move in England, writes Simon Lambert. 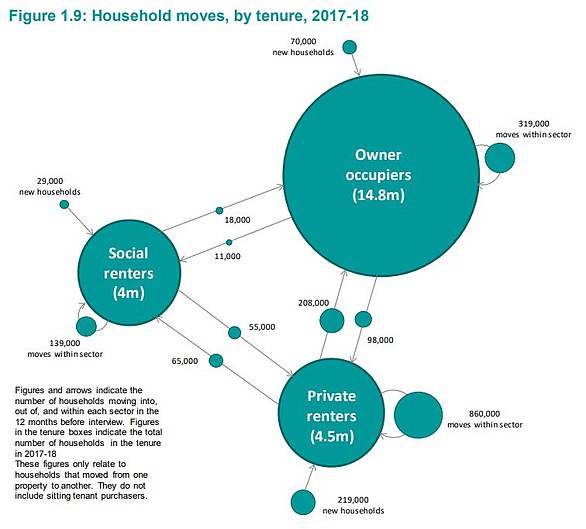 The chart above from the English Housing Survey shows how people moved around the sectors in 2017 to 2018 and the total number in them.

Paula Higgins, of the Homeowners Alliance campaign group, said: ‘These terrible figures show how many people are in rental accommodation, desperately trying to get on to the housing ladder as it gets further away from them.

‘If you’re lucky enough to have the bank of mum and dad, you’re able to get on to the property ladder, but it’s incredibly difficult to raise money for a property.

‘We’re courting disaster. If an entire generation is unable to get on to the property ladder, then what will happen to them and their families in old age?’

The survey also showed more than 300,000 families in social housing are squeezed into too few rooms – the highest rate of overcrowding since records started 24 years ago.

More than 250,000 households are living in overcrowded private rented housing, the second highest level recorded since 1996.

Owning a home makes you happier 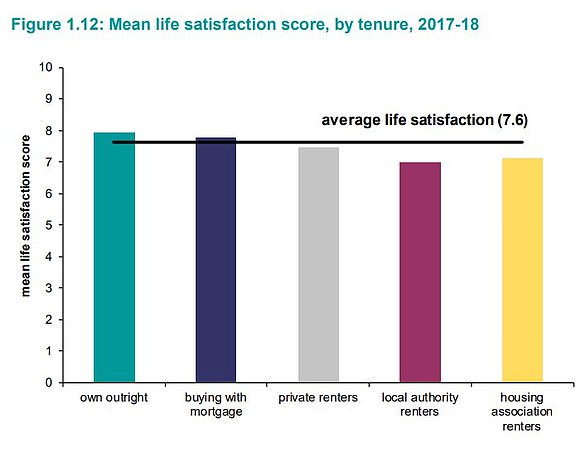 Our house: The English Housing Survey showed that those who own their home outright have the highest life satisfaction score

The English Housing Survey looked at levels of life satisfaction for the different types of housing tenure and, perhaps unsurprisingly, discovered that those who own their home mortgage-free are happiest, writes Simon Lambert.

This was followed by those with a mortgage, while renters of all types slipped below the average life satisfaction level of 7.6, albeit private renters were only just under the bar.

The report noted, however, that there were other factors at play rather than just housing tenure.

It said: ‘This finding may lead to the conclusion that the relationship between life satisfaction and tenure is direct. However, there were important differences between the types of household that typically live in each tenure, and these differences may be related to life satisfaction.

‘For example, social renters were more likely to be unemployed or ‘other inactive’ (this includes long-term sick or carers) than owner occupiers or private renters.’

The housing survey also showed that the quality of English homes has improved dramatically over the past decade.

Homes judged to be ‘non-decent’ fell substantially across all the housing tenures, although there was a recent slight rise for owner-occupied properties. 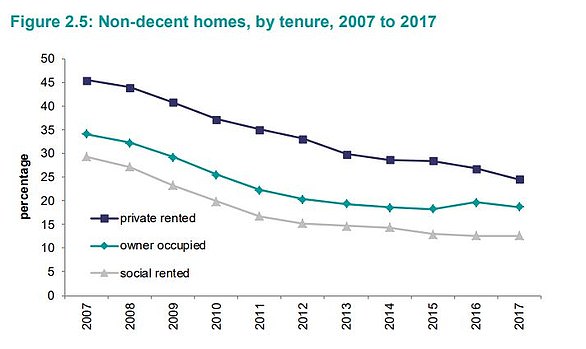