The number of young people taking hard drugs has been rising remorselessly this decade, official figures have found, driven by an increase in cocaine and ecstasy use.

Last year more than half a million 16 to 24-year-olds were regular users of the most dangerous substances – a rise of more than a third since 2011.

The increase has been fuelled in part by the cheap price of cocaine, which is at its lowest for 25 years.

The admission of what the report called ‘an upward trend in the use of Class A drugs’ comes at a time of deepening concern over increases in knife crime and murders as a result of increased competition between ruthless gangs trying to control the lucrative drug trade.

A bag of ecstasy pills. The research found that 8.4 per cent of 16 to 24-year-olds used Class A substances last year

The analysis of drug use among young people, taken from the Government’s Crime Survey Of England And Wales, revealed that 8.4 per cent of 16 to 24-year-olds used Class A substances last year.

This was up by more than a third on the 6.2 per cent level recorded in 2011 and early 2012, with the rise ‘mainly driven by an increase in cocaine and ecstasy use’.

Crime minister Victoria Atkins said: ‘Drugs devastate lives, ruin families and damage communities. While overall levels of drug misuse are similar to a decade ago, we are concerned about the increase in use of Class A drugs and remain committed to reducing the use of these drugs and the harms they cause.’

But critics accused ministers and police chiefs of neglect and indifference towards the spread of hard drugs. David Raynes of the UK National Drug Prevention Alliance said there had been ‘much less enforcement at major trafficking level’. He added: ‘The market is oversupplied with product and there is much more competition among dealers to retain markets.’ 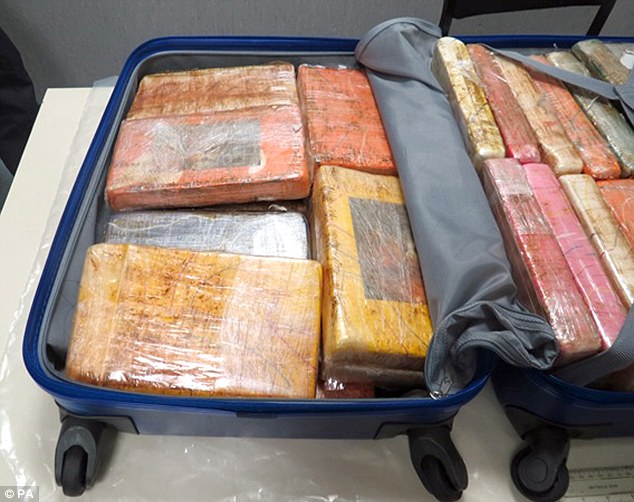 A seizure of cocaine found in a suitcase. Last year more than half a million 16 to 24-year-olds were regular users of the most dangerous Class A substances

The survey, based on interviews carried out in more than 34,000 homes, showed among 16 to 24-year-olds the numbers using cannabis, a Class B drug, has been hovering at about a million for the past decade – a third lower than what was recorded in the 1990s.

The booming trade in hard drugs in recent years has seen dealers expanding away from their traditional markets in major cities and finding buyers in rural towns.

Kathy Gyngell, co-editor of the Conservative Woman website and a long-standing analyst of the use of illegal drugs, said: ‘So much for the argument that liberalising so-called softer drugs means people won’t dabble with harder drugs.

‘It is not surprising use is going up in view of the police’s unilateral declaration of inaction and non-prosecution of drugs offences.’