Nun with a chainsaw helping clean up after Irma goes viral

A photo of a nun wielding a chainsaw to clean up the aftermath of Hurricane Irma went viral Tuesday after the Miami-Dade Police Department posted it on Facebook.

The department posted along with the photos and videos:  ‘As we recover from #HurricaneIrma, these acts of kindness remind us all that we are #OneCommunity in #MiamiDadeCounty! Thank you Sister and all of our neighbors that are working together to get through this! #MiamiDadeStrong’

Her habit billows in the wind as she chops up the tree in the amusing footage.People on social media were amused by the sight. One person commented: ‘She’s is truly an awesome example of a compassionate servant of God. Thank you Sister Margaret Ann! 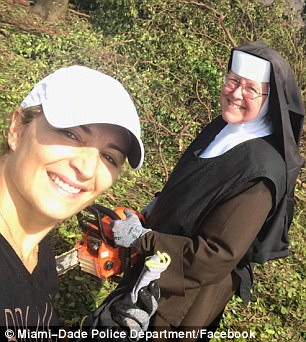 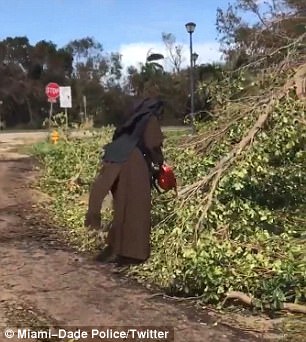 Another said: ‘Prayers are great, but prayer accompanied by action is powerful.’

Catholic schools in Miami-Dade county will stay closed until further notice according to the Miami Herald.