Nurse, 42, has a condition that stops her body producing saliva or tears

A nurse who is unable to produce tears or saliva says she feels like she is ‘suffocating’ and ‘gasping for air’.

Nadia Bartella, 42, suffers from the autoimmune disorder Sjögren’s syndrome, which affects the parts of the body that produce fluids.

She was diagnosed in 2015 after going to A&E with a dry throat and gritty eyes, which she put down to an allergic reaction to pesto.

Ms Bartella can only eat foods ‘moistened’ by gravy, and relies on lozenges to relieve the dryness in her mouth and throat.

The nurse, of Brighton, also has to use eye drops throughout the day and sleeps with a mask to prevent her eyes ‘crusting over’. 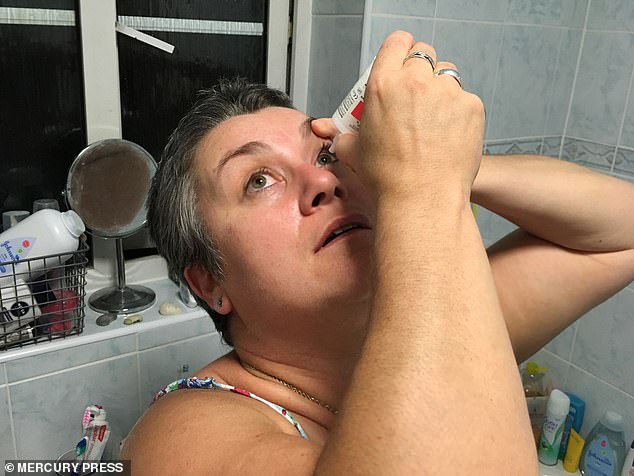 Ms Bartella suffers from the autoimmune disorder Sjögren’s Syndrome, which affects the parts of the body that produce fluids, including tears. She relies on eye drops throughout the day

Speaking of her condition, Ms Bartella said: ‘It starts with a dry mouth, then becomes a cough.

‘Then it feels like you’re suffocating and gasping for air. Sometimes my tongue even gets stuck to the roof of my mouth.

‘The sad thing about it is there’s no cure. It’s a horrendous thing to be faced with and has definitely changed my life.’

After going to A&E in 2015, Ms Bartella thought she may be allergic to ingredients in pesto or suffering from hay fever.

However, medics were concerned the condition may be more serious.

‘Doctors thought I was diabetic because of the crazy mouth dryness, but I also got cuts and sores on my lips so that’s when they tested for autoimmune diseases’, Ms Bartella said.

Ms Bartella was referred to a rheumatologist and put on an eight-month waiting list for a lip biopsy.

Four weeks later, the results revealed her salivary glands are almost non-existent and she was diagnosed with Sjogren’s syndrome.

‘It was a lot to take in when I was diagnosed at 37,’ she said. ‘I had an active lifestyle so it came as a big shock.’ 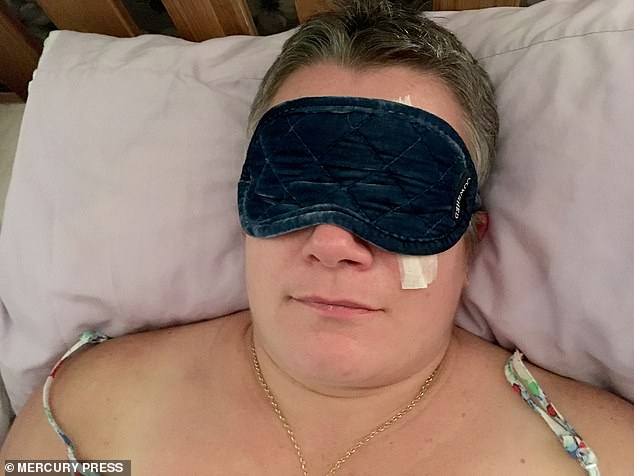 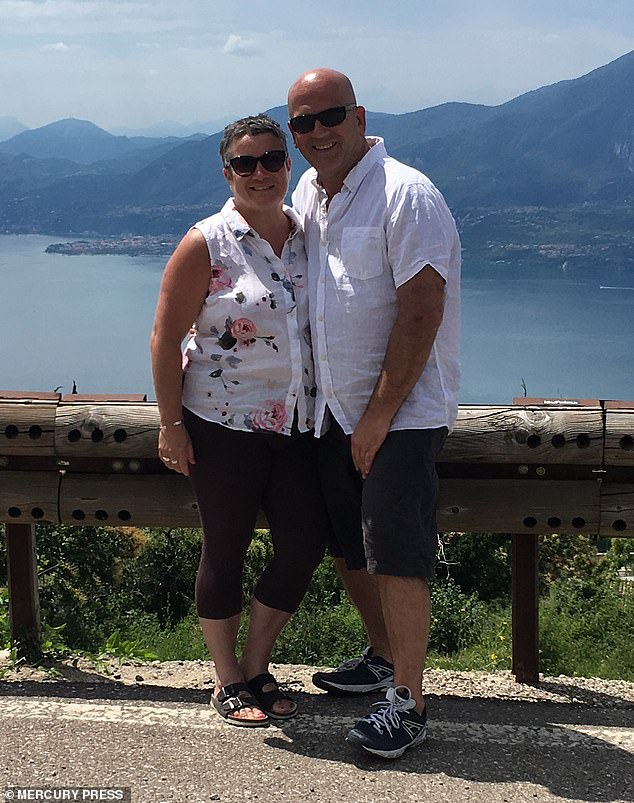 Ms Bartella (pictured with her partner Tony) takes between six and 10 lozenges a day, which she wedges in her gums to create ‘saliva’. She also has to drink at least two litres of water a day to stop her lips sticking together and prevent serious eye or mouth infections

Ms Bartella takes between six and 10 lozenges a day, which she wedges in her gums to create ‘saliva’.

She also has to drink at least two litres of water a day to stop her lips sticking together and prevent serious eye or mouth infections.

When it comes to food, Ms Bartella has to avoid dry meat and crisps, and covers her meals in gravy to make them easier to swallow.

Her go-to dinner is baked beans, which she even has to mash. ‘Spicy, sugary and salty foods make my dry mouth worse,’ she said.

‘And I have to be careful when eating as I can get painful ulcers and I’m at risk of gum disease.’

Ms Bartella also always has a first aid kit to hand filled with temporary treatments. All this has taken a huge toll on her social life.

‘I had a very limited social calendar when I was first diagnosed because I felt like there was stuff constantly stuck in my throat,’ Ms Bartella said.

‘It’s embarrassing and I feel conscious about it.’ 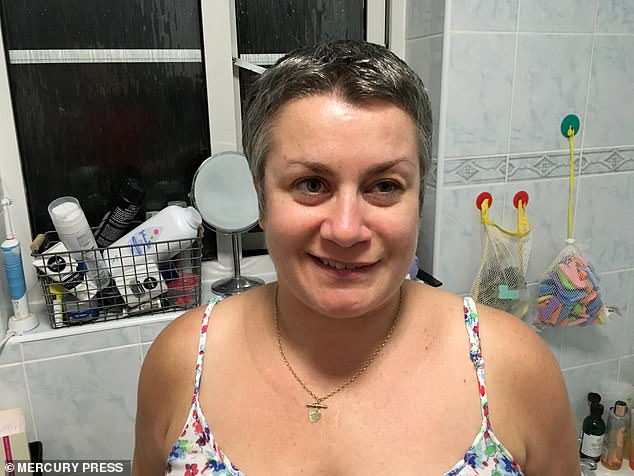 Ms Bartella has a ‘very limited social calendar’ because she feels ’embarrassed and self conscious’ by her condition. When eating out, she orders food ‘moistened’ by gravy that is easier to swallow. At home, her go-to meal is baked beans, which she even has to mash 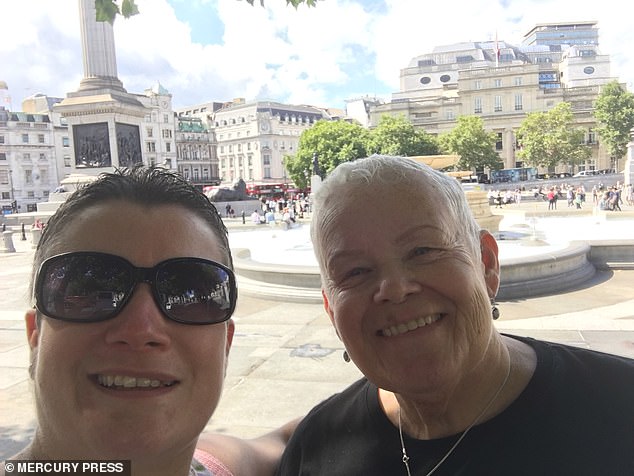 Despite all she has endured, Ms Bartella is determined to make the best of her situation.

‘At first, my friends and family at first wondered why I was drinking so much water but now it’s all second nature to them, and my partner and mum are fantastic,’ she said.

‘Now, I don’t feel as embarrassed when I get my first aid kit out, however when I’m in a new environment, I’m out of my comfort zone so it can be daunting

Age is one of the biggest risk factors for Sjögren’s syndrome, with most people being diagnosed over 40.

‘I’m probably one of the youngest people in the UK to be diagnosed with the syndrome because it usually happens when you’re much older,’ Ms Bartella said.

She is speaking out to raise awareness of the little-known disorder.

‘GPs can pass it off as hypochondria or as a reaction to other drugs, so it’s often dismissed,’ Ms Bartella said.

‘I want to share Sjogren’s is really hard to deal with, and just because you can’t physically see it, it does exist.’

WHAT IS SJÖGREN’S SYNDROME?

Sjögren’s syndrome is an autoimmune disorder that causes a dry mouth and eyes.

The mucus membranes and moisture-secreting glands of the eyes and mouth stop producing fluids. This results in decreased saliva and tears.

Sjögren’s syndrome’s cause is unclear. It may be related to genes, or exposure to a bacteria or virus.

The condition is more common in people over 40. Women are ‘much more likely’ to suffer. Sjögren’s syndrome is also linked to other conditions, like lupus and arthritis.

Treatment focuses on relieving symptoms, such as prescription eye drops and drugs that increase saliva production.