Nurse who kept nanny as slave kicked out of profession

Abimbola Adewakun (picture), 48, has been thrown out of the nursing profession after being convicted of trafficking

A nurse who, along with his doctor wife, kept a nanny as a slave for two years at their house in Erith, London, has now been thrown out of the profession.

Abimbola Adewakun, 48, and his wife, Dr Ayodeji Adewakun, 44, lured Lydia Ogundowala, 29, to the UK from Nigeria.

They promised her a monthly wage of £500, which she hoped would support her family following the death of her mother.

Ms Ogundowala’s daily routine involved cleaning the house, cooking for the family, preparing the children for school, and running other errands for the couple.

Sometimes she was made to work through to midnight before being allowed to finally sleep.

In court, she recalled being told: ‘You are lucky not to be beaten like the last girl.’

After two years of constant abuse and humiliation, the Nigerian nanny escaped with just £350, the equivalent of £3.36 a week.

Adewakun was convicted at Southwark Crown Court for trafficking persons into the UK for the purpose of exploitation.

The nurse, who specialised in caring for patients with learning difficulties, was hauled before the Nursing and Midwifery Council following his conviction.

Christopher Scott, counsel for NMC, said: ‘He was found guilty of one count of bringing a person to the UK for exploitation. He was given six months imprisonment and ordered to pay £10,000 in compensation to the victim.’

Speaking of the victim’s ordeal he said: ‘Her passport was taken from her, she was made to work long hours and was mistreated.

‘She worked for about two years. 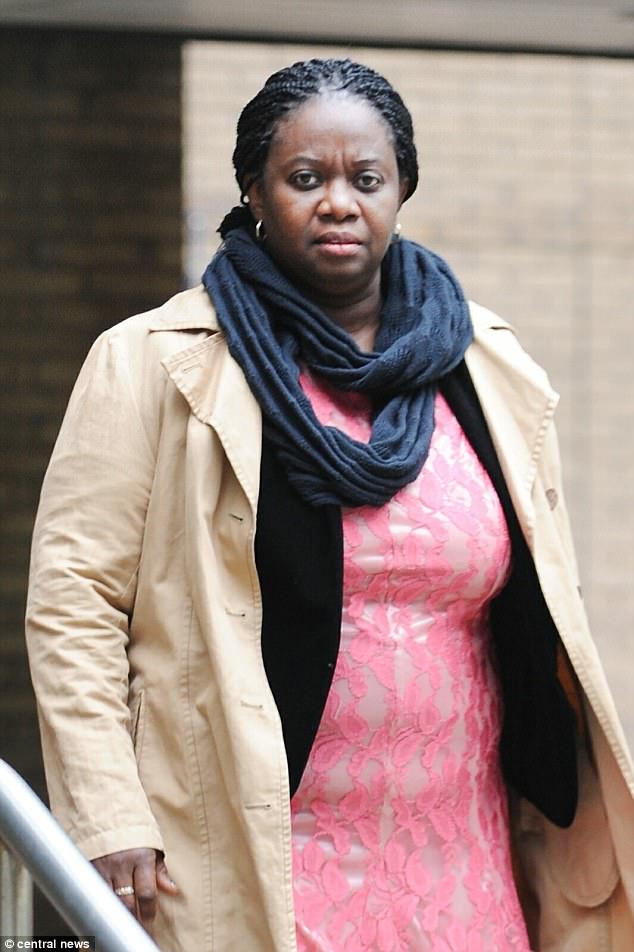 Ayodeji Adewakun, 44, worked as a doctor and was convicted of trafficking alongside her nurse husband

‘Both Abimbola and Ayodeji Adewakun, were involved in targeting the victim. She was a vulnerable person who spoke very little English and had no real idea of where she was save that she was in the UK and on the fringes of London.

‘She relied on your promises, and so did her father, to improve the life of her and her family after the death of her mother.’

Adewakun, from Erith, southeast London, appeared at the hearing and broke down in tears as details of his and his wife’s crime were read out to the panel.

He said: ‘I feel so sad, I feel so sorry for what has happened. It has caused me a lot of aggravation.

‘It affects me in a lot of ways. I wish I could turn back the hand on the clock. I am deeply sorry for what has happened.

‘As a matter of fact, I know this cannot happen again. What went wrong was my wife and I could not keep records.

‘Record keeping was what went wrong. We could not prove we had paid the lady. Thinking back now, I would do things differently.

‘I would like to say this happened and I am not proud of it, but that was then, and this is now. I have time to think about these things and I am full of sorrow.’

NMC panel chair Julia Whiting told Abimbola Adewakun, who specialised in treating patients with learning difficulties: ‘The panel considered that your conviction was of a very serious nature.

‘You had trafficked a young woman and exploited her for more than two years.. The panel find that to allow you to continue to work undermines public confidence in the profession.

‘The panel’s decision was that the appropriate order was a striking off order. It determined that nothing short of this would satisfy the public interest.’

The Adewakuns, both of St Catherine’s Road, Erith, denied two counts of trafficking a person into the UK for exploitation but were convicted on one by after a trial last May.