A nurse was diagnosed with two tumours after her midriff swelled up so much people thought she was pregnant.

Carla Nicholas, 45, went from a slim size 12 to a size 16 in just two weeks, which doctors initially dismissed as bloating due to constipation.

The mother-of-one, of Shrewsbury, Shropshire, even endured cruel stares and comments from strangers as they accused her of drinking while pregnant at the pub.

After finally being given a scan, Ms Nicholas – who lives with her 36-year-old partner Wes – discovered she had the tumours, one of which grew to 22cm across.

Although she underwent a hysterectomy to remove the growths, medics later discovered the disease started in her cervix and had spread to her ovaries.

Now incurable, Ms Nicholas has been given just five years to live. 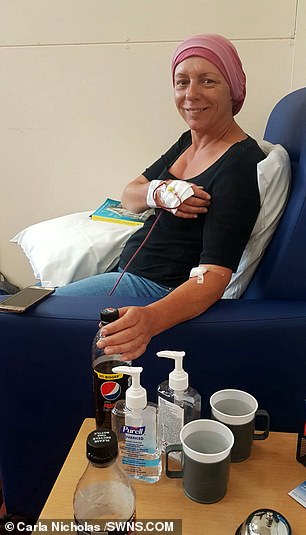 Carla Nicholas was diagnosed with two cancerous tumours after her midriff swelled up so much people thought she was pregnant. Pictured left with her partner Wes, the nurse went from a slim size 12 to a size 16 in just two weeks. Despite doctors at first dismissing it as wind, she was finally diagnosed and forced to have a hysterectomy (pictured right after the surgery) 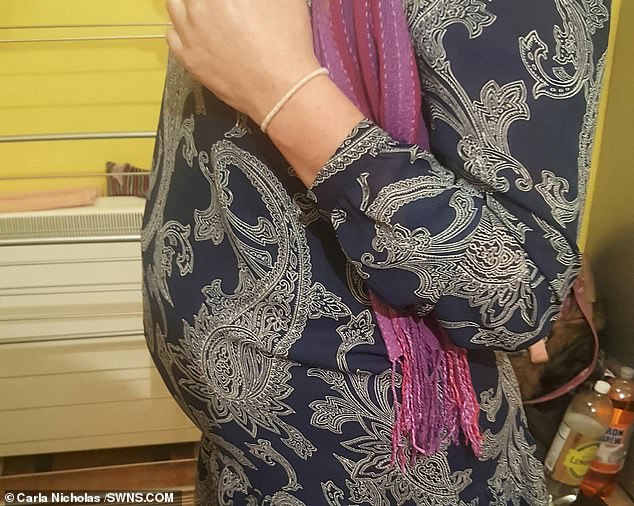 Ms Nicholas swollen abdomen (pictured) attracted cruel stares from strangers who thought she was drinking while expecting. At first the mother-of-one thought it was due to stress or her pre-existing condition Peutz Jeghers Syndrome – which causes polyps to form in the gut

Ms Nicholas initially put her swollen abdomen down to stress when it started in November 2017.

And when she became unable to fasten her jeans, she thought it must be due to her pre-existing condition Peutz Jeghers syndrome – which causes polyps to form in the gut.

But when the swelling failed to go down, Ms Nicholas phoned her GP who said it sounded like wind.

She soon developed a sore back and had people increasingly asking if she was expecting.

‘A lot of people also started staring at my stomach whilst I was at work and out socialising,’ Ms Nicholas said.

‘I was in the pub drinking before Christmas and people were asking me why I was drinking when I was pregnant.

‘People were looking at me in disgust.’

Deciding it had to be checked out, Ms Nicholas went to a walk-in centre, where doctors referred her for a CT scan at the Princess Royal Hospital in Telford.

Doctors then told Ms Nicholas she had a 10cm and a 6cm growth on her cervix – but is was unclear whether they were cancerous.

Just two weeks later, one of the masses had grown to an astonishing 22cm.

Hoping they were just cysts, Ms Nicholas had a hysterectomy on January 17 and went back to work while she nervously waited for the test results.

She the began to experience severe flatulence and abdominal pain – both signs of ovarian cancer.

‘[The flatulence was] so bad, [it was] enough to knock out a room with,’ Ms Nicholas said.

When her bloating (pictured right) failed to go down, Ms Nicholas (pictured left) took herself to a walk-in centre where she was referred for a CT scan. The scan revealed growths on both her ovaries, however, it was unclear if these were just cysts or cancerous tumours 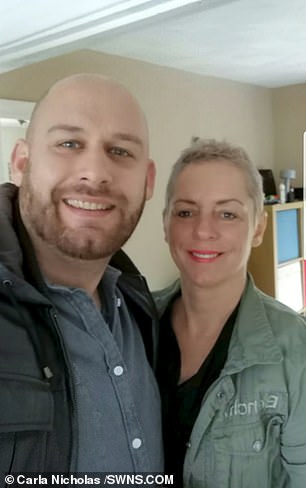 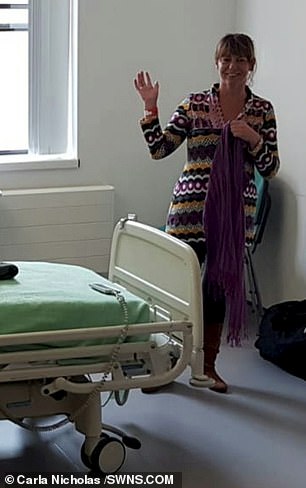 Ms Nicholas (pictured left with Wes after chemo) received the devastating news she had cervical cancer that has spread to her ovaries. Treatment aims just to extend her life. The nurse (pictured right before her hysterectomy) has been given five years left to live

After what felt like a long wait, Ms Nicholas was devastated to discover she had stage 4B cervical adenocarcinoma – a form of cervical cancer.

‘The gynaecology consultant looked me in the eyes, and she started with the words, “I am so sorry”,’ Ms Nicholas said

‘I could feel tears sting my eyes and I was squeezing Wes’ hand like my life depended on it.

‘You hear the word “cancer” and you don’t know what to think about. All of sudden I had gone from “nurse” to “patient”.’

Ms Nicholas then received another crushing blow when medics told her it had spread and there was little they could do.

‘I was told cancer was not curable and would have up to five years to live,’ she said.

‘All I could hope for now was to go into partial remission to try and get it under control.’

Ms Nicholas has endured several rounds of palliative chemo in the hope it will extend her life.

‘I am going to be positive and fight this cancer, even though it feels like a ticking time bomb inside,’ she said.

Ms Nicholas is speaking out to warn others of the symptoms of cervical cancer.

‘If you have the same symptoms as me, it is best to go and get them checked by your doctor earlier rather than later,’ she said. 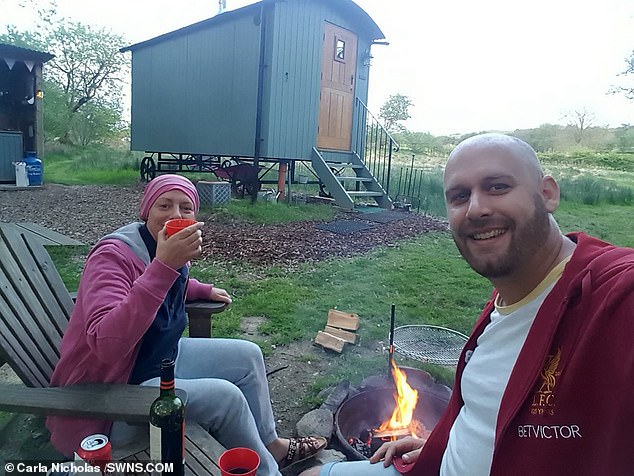 Pictured with Wes on a camping trip after her diagnosis, Ms Nicholas is determined to stay positive despite ‘fighting a ticking time bomb’ and wants others to know the signs of cancer