Food is the main event of Thanksgiving and Americans consume more calories that day than on any other holiday.

The average adults takes in an estimated 3,000 to 4,500 calories on the fourth Thursday of November, according to the Calorie Control Council.

So how can you make sure to enjoy your turkey, stuffing and mashed potatoes without feeling like you’re filling up on sugar, sodium and fat?

DailyMail.com spoke to four nutritionists about the best and worst ways to prepare your favorite Thanksgiving dishes – and how to avoid feeling like you’re going to pass out from a food coma at the end of the night.

Four nutritionists told DailyMail.com the best and worst ways to prepare Thanksgiving dishes and how to approach Turkey Day without being overwhelmed

ROAST YOUR TURKEY INSTEAD OF DEEP FRYING IT

When it comes to the pièce de résistance of Thanksgiving – the turkey – our nutritionists say the worst way to cook the bird is by putting it in a deep fryer.

‘While I’m sure it’s delicious, when you deep fry the turkey, it absorbs all the oil,’ Lara Metz, of Lara Metz Nutrition in New York City, told DailyMail.com. ‘I don’t recommend it.’

Deep-fried turkeys are often cooked in hydrogenated oils, which are high in trans fats.

A serving of 3.5 ounces of deep-fried turkey contains roughly 190 calories and 11 grams of fat.

Instead, our nutritionists recommend roasting the turkey. The same amount of roasted turkey breast has about 165 calories and seven grams of fat.

‘You can stuff [the turkey] with aromatics and put herbs under the skin and that’s a fabulous place to get flavor without using oil,’ Metz said. 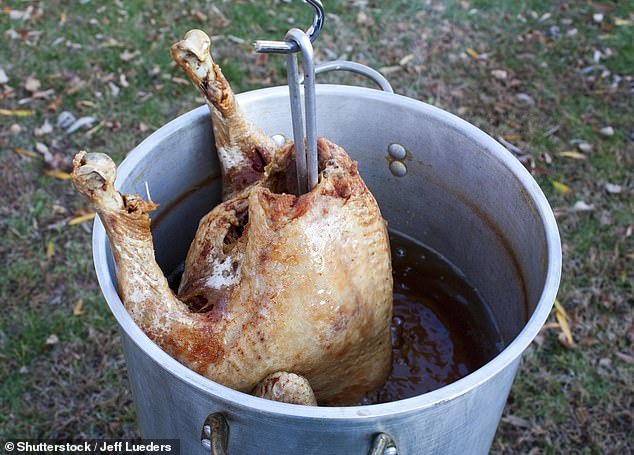 Deep frying a turkey involves cooking the bird in hydrogenated oils, which are high in trans fats, known to raise the risk of high cholesterol and heart disease

SWAP OUT BUTTER FOR GREEK YOGURT IN MASHED POTATOES

Potatoes on their own are healthy and are high in potassium and fiber. Mashed potatoes? Not so much.

Traditionally, mashed potatoes are made with butter, milk and/or heavy cream and salt.

1. Don’t skip breakfast. You’ll be less likely to overeat during the big meal

2. Drink at least eight cups of water throughout the day so you don’t confuse hunger for thirst

3. Try sticking to one plate and not going back for seconds

4. Give away leftovers to guests or to a local food pantry

The US Department of Agriculture (USDA) says one cup of homemade mashed potatoes prepared with whole milk or butter contains 240 calories, four grams of protein and nine grams of fat.

If they’re made with heavy cream, the calorie count can be as high as 400.

‘Either use a low-fat or a fat-free sour cream or a Greek yogurt. You’re adding in a healthy source of protein without adding too much saturated fat.’

One serving of mashed potatoes with Greek yogurt contains about 150 calories and seven grams of fat, cutting back calories by over two-thirds without sacrificing the dish’s creamy texture. 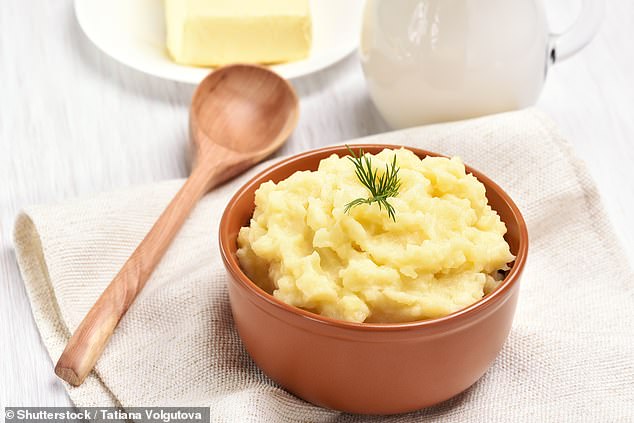 USE WHOLE WHEAT BREAD INSTEAD OF WHITE BREAD IN YOUR STUFFING

Many traditional stuffing recipes use white bread, which is low in nutritional value.

When it comes to white bread, the outer shell of the grain is stripped, which is where all the nutrients are.

‘You’ve got the fiber missing, you’ve got a lot of the nutrients that were inherent in the grain missing. If you’ve got less fiber, you tend to get less full.’

Sirota recommends using a whole wheat bread or whole grain bread, which has fewer carbs and more fiber which is filling to help slow digestion.

One cup of a classic stuffing can run you 355 calories and 17 grams of fat, according to the Calorie Control Council.

The same serving of stuffing made with whole wheat bread, on the other hand, is about 160 calories and has eight grams of fat. 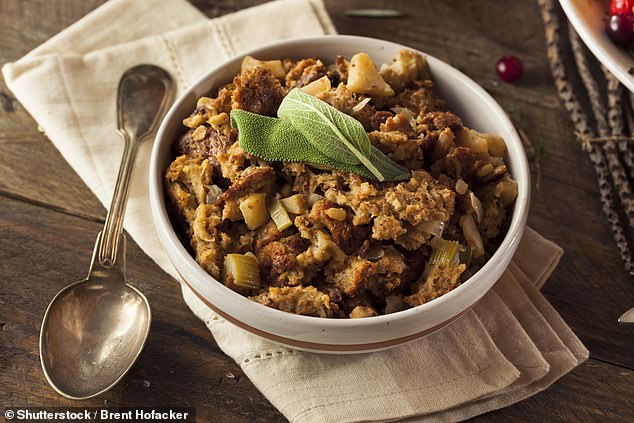 SAUTÉE YOUR GREEN BEANS INSTEAD OF MAKING THEM INTO A CASSEROLE

Green beans, like potatoes, are rich in fiber and potassium, iron and zinc – but the iconic casserole they’re at the center of isn’t so healthy.

‘So you’re adding fat, adding sodium and masking all the nutritional benefits of the green beans.’

Metz says the best way to serve green beans is to sautée them.

‘I’m a big believer that they should be simple,’ she said.

‘So sautée them in olive oil, maybe add nuts and seeds or lemon. It will help fill you up and you won’t feel as tired.’ 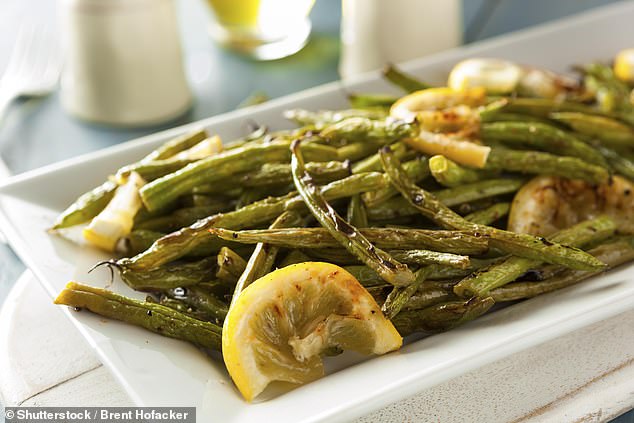 USE FRUIT JUICE INSTEAD OF WHITE SUGAR IN YOUR CRANBERRY SAUCE

Cranberries are considered a ‘superfood’ because they are high in vitamin C, fiber, antioxidants and are used in the prevention of urinary tract infections.

However, by themselves, they are naturally tart which is why most cranberry sauces call for at least one cup of white sugar.

Eating too much refined sugar has been linked to several health problems include asthma, cavities, raising levels of bad (LDL) cholesterol and increasing your risk of high blood pressure and heart disease.

Our nutritionists say there are more natural ways to sweeten the side dish.

‘Use pineapple juice or orange juice it need something to sweeten it,’ said Warren.

‘What you get are the nutrients that come along with it. You get vitamin C, you get magnesium. It’s easy to make cranberry sauce healthy with natural sugars.’

Foods with natural sugars, as opposed to refined table sugar, will be slower to digest and less likely to cause your blood-sugar spike, which, in turn, leads to overeating. 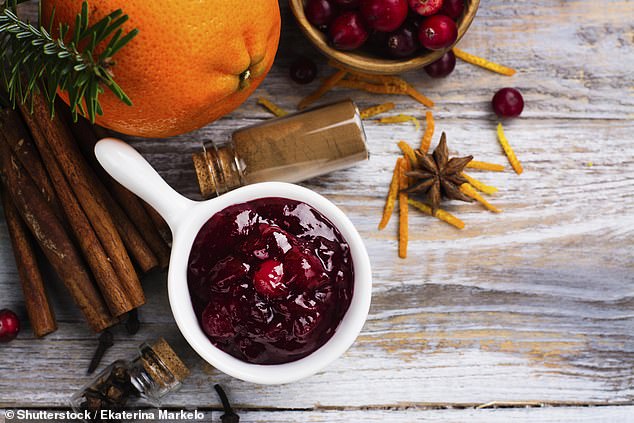 MAKE A GRAHAM CRACKER CRUST FOR YOUR PUMPKIN PIE

Perhaps the most popular Thanksgiving dessert is pumpkin pie, but it can be loaded with unhealthy ingredients.

Andrea Chernus, of Chernus Nutrition in New York City, says the majority of the calories don’t come from the filling, but from the crust.

‘If you’re not having the pie crust, it saves a lot of calories,’ she told DailyMail.com.

‘So perhaps use a graham cracker crust instead of dough with butter.’

A traditional baked for a nine inch pie is about 935 calories and 41 grams of fat.

But a baked pie crust made of graham crackers only runs about 110 calories and five grams of fat, according to the USDA. 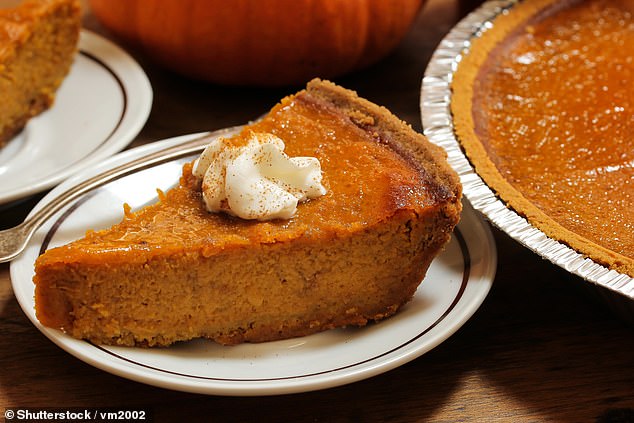