New York City entered its long-anticipated phase 2 reopening on Monday, allowing restaurants to provide outdoor service along with allowing barbershops and hair salons to reopen, but many of the hundreds of thousands of office workers who are also allowed back stayed home.

Under the new phase, retailers are allowed to welcome patrons inside so long as they maintain a 6ft distance from one another and wear masks. Offices are allowed to bring back 50 percent of their staff but with many companies now adjusted to an entirely working-from-home model, hardly any have returned.

Precise data is still difficult to come by, with every company seeming to make up its own plan as the reopening progresses. Big tech companies like Facebook and Twitter have told staff they don’t have to come back to the office for the rest of the year if ever.

Finance giants like JP MorganChase have not yet sent staff back in. Morgan Stanley expects to have only 10 percent of its Manhattan staff in its office until at least July 4.

Mayor Bill de Blasio said on Monday that the new phase ‘allows’ 300,000 people to come back to work but it’s unclear if that was the number he actually expects to return.

Diners eat lunch in outdoor seating at a restaurant in the Little Italy section of Manhattan on the first day of the phase two re-opening of businesses following the outbreak of the coronavirus disease (COVID-19), in New York City, New York, on June 22 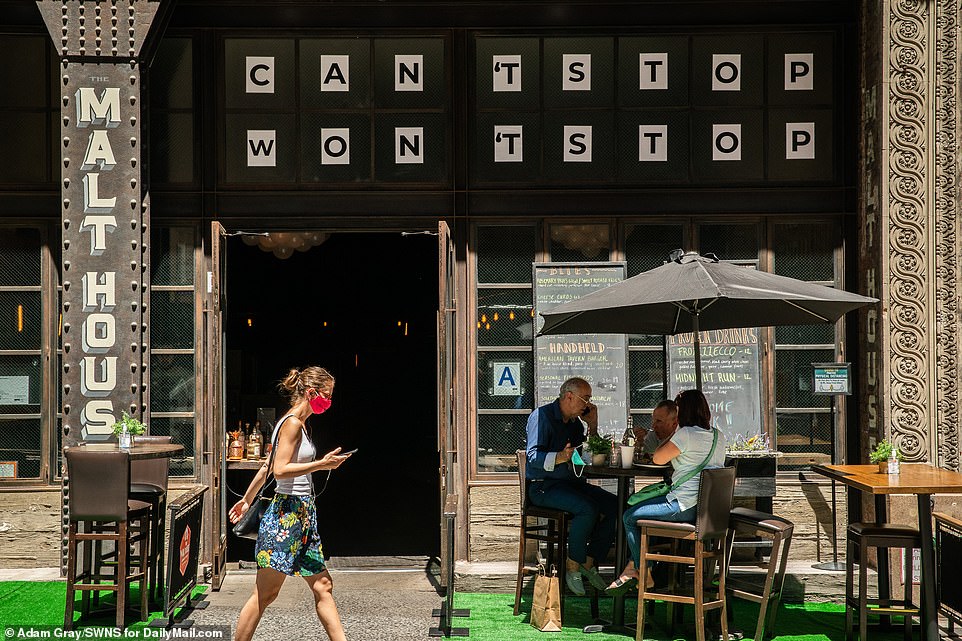 People dine outside in the Financial District of Manhattan, New York, during the phase two reopening of the city during the coronavirus pandemic on June 22 2020 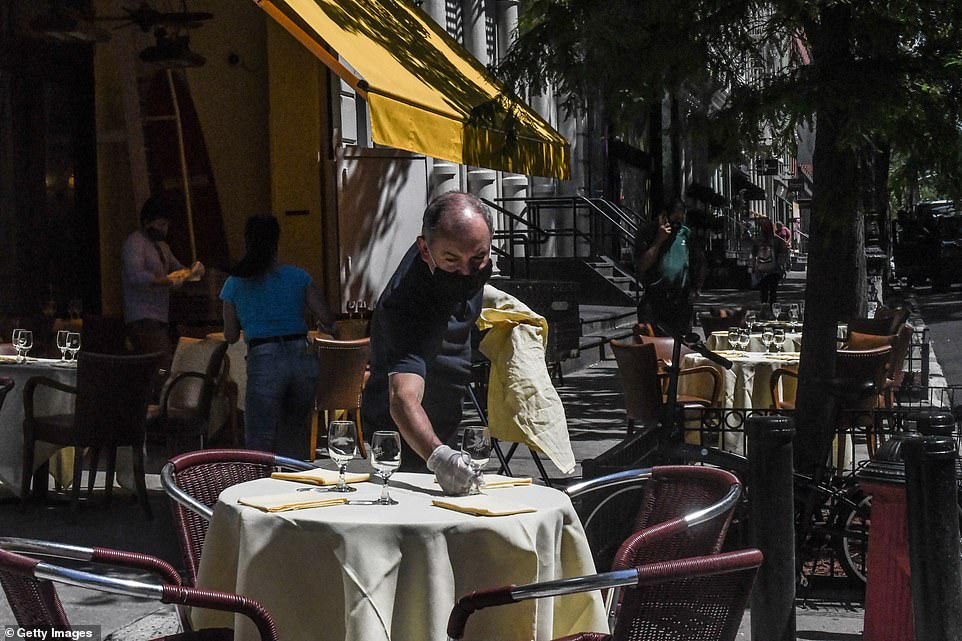 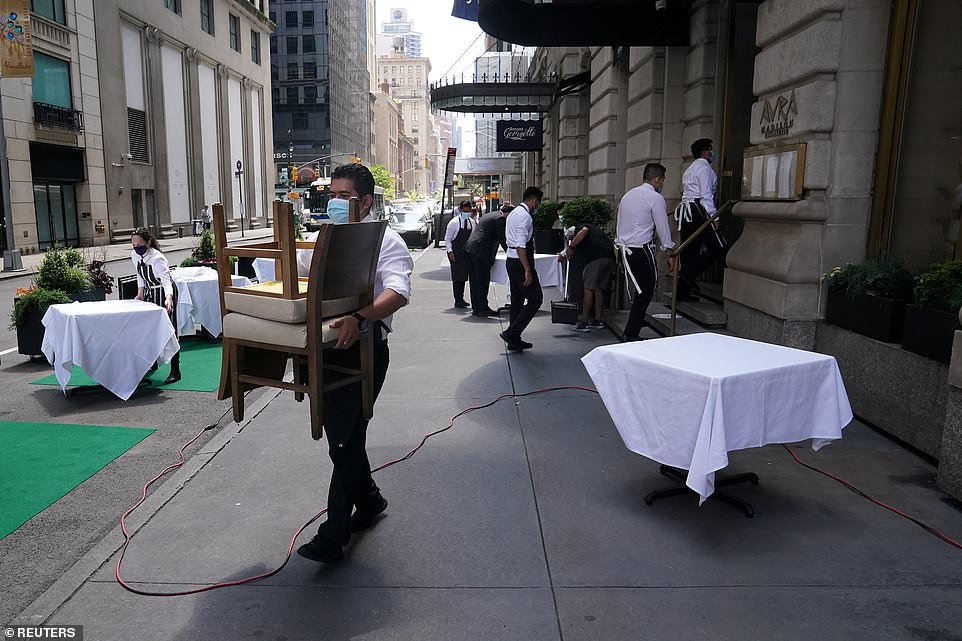 Waiters at the upscale restaurant Avra set up tables and chairs outside on Monday, June 22 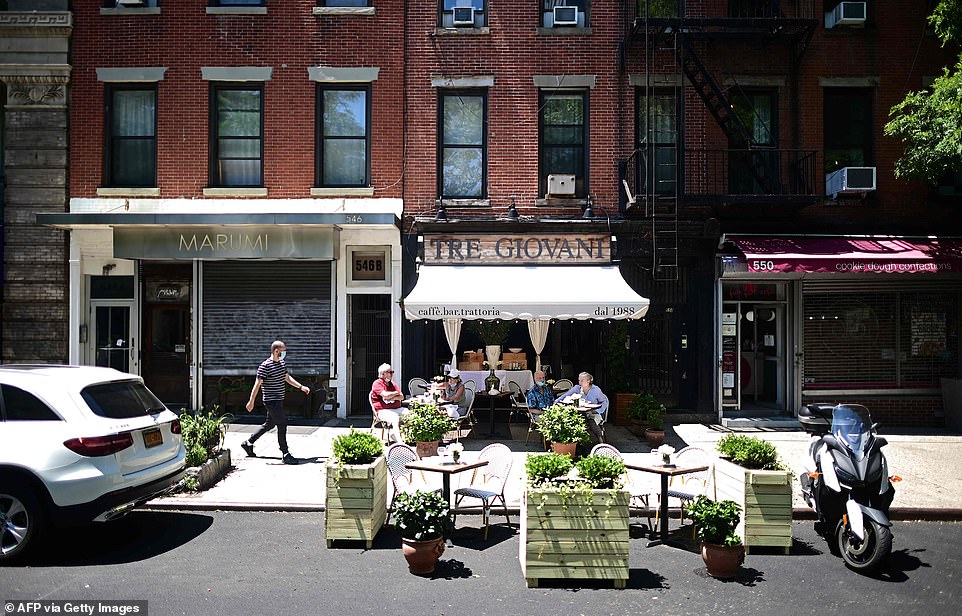 According to recent MTA figures, bus ridership is at 56 percent of its usual amount. It means 1.2million people are still taking the bus daily.

Subway ridership is much lower, with only 17 percent of the normal amount still using the network, a figure of around 850,000.

While more than 3,000 restaurants have been granted permission to serve people outside, it’s unclear how much footfall they will have to serve because so much of the workforce remains out of the city.

Not every restaurant in Manhattan has survived the pandemic either.

In April and May, commercial landlords reporting collecting only 20 percent of their usual revenues.

Some retailers are trying to get out of their leases. Valentino has sued its landlord to wiggle out of its Fifth Avenue lease, and Victoria Secret sued landlord SL Green to break its Herald Square lease.

‘We’re calling Monday kind of a soft opening because we don’t anticipate every tenant, obviously, coming back all at once,’  Ken Fisher, a partner at Fisher Brothers, told The New York Times.

‘What we recognize is that economies are going to need to be opened gradually by turning a dial rather than flipping a switch.

‘And as economies do that, I think we have a responsibility not only to adhere to the public health guidelines, but to be slower than others in bringing people back simply because we can.’

According to a recent survey by CoreNet Global, only 15 percent of companies said their offices would be back to normal within six months.

Nearly 40 percent said it would take more than a year before they are back to full occupancy. 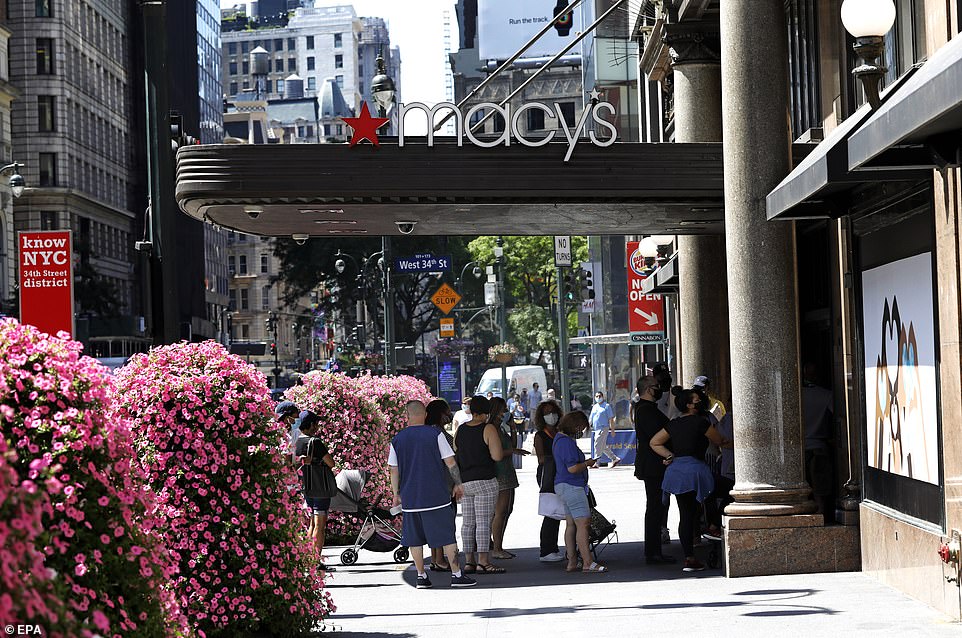 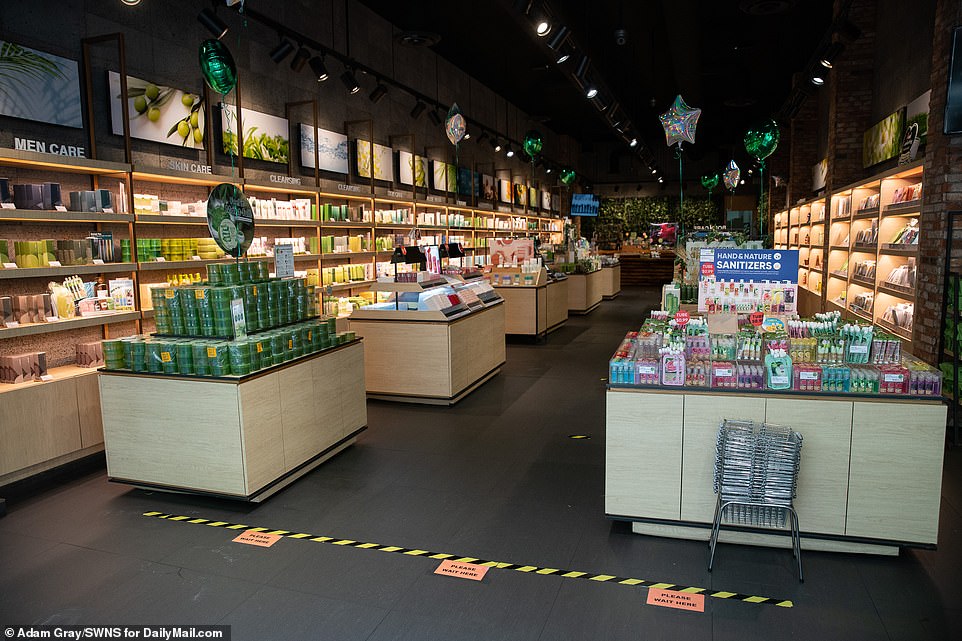 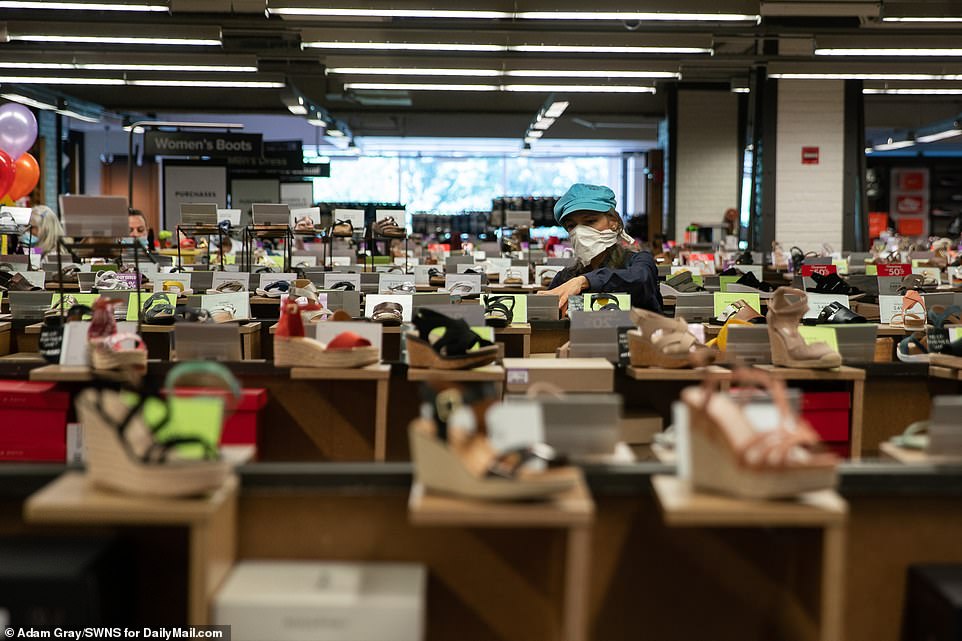 A woman shops inside DSW, a shoe store in Manhattan, on Monday, the first day of NYC’s phase 2 reopening 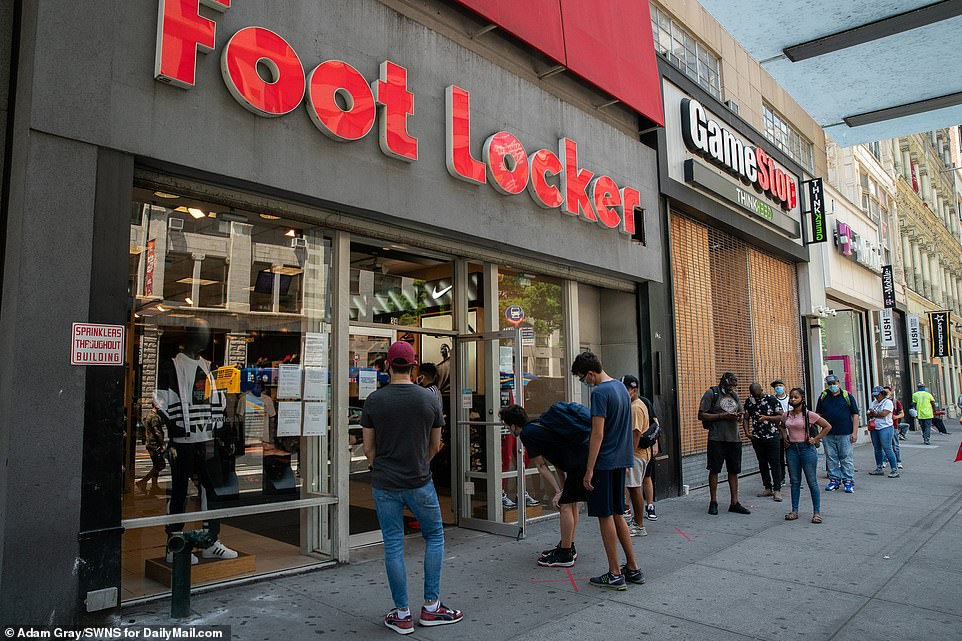 Customers line up outside a Footlocker in Manhattan on Monday 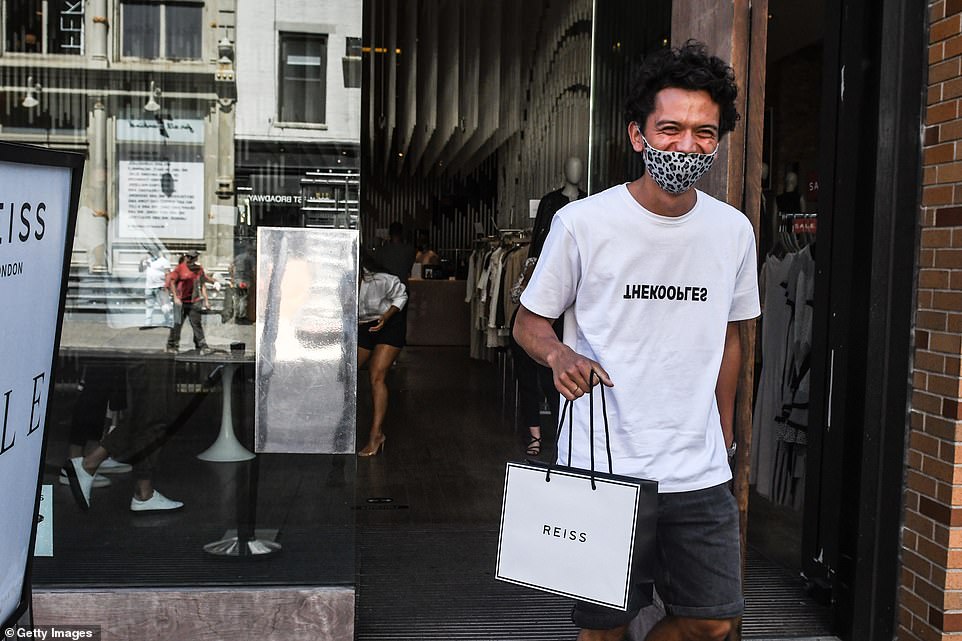 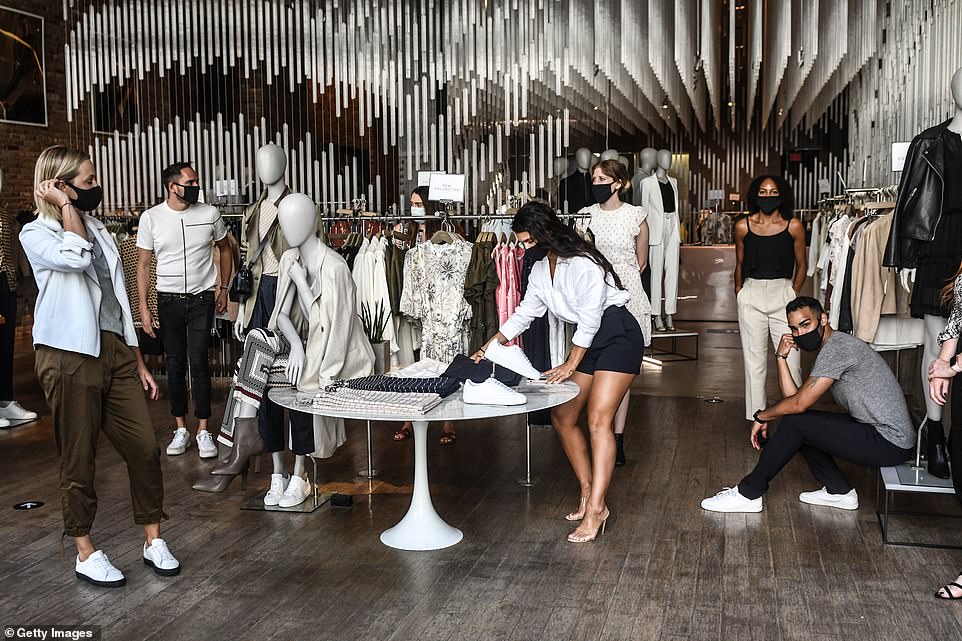 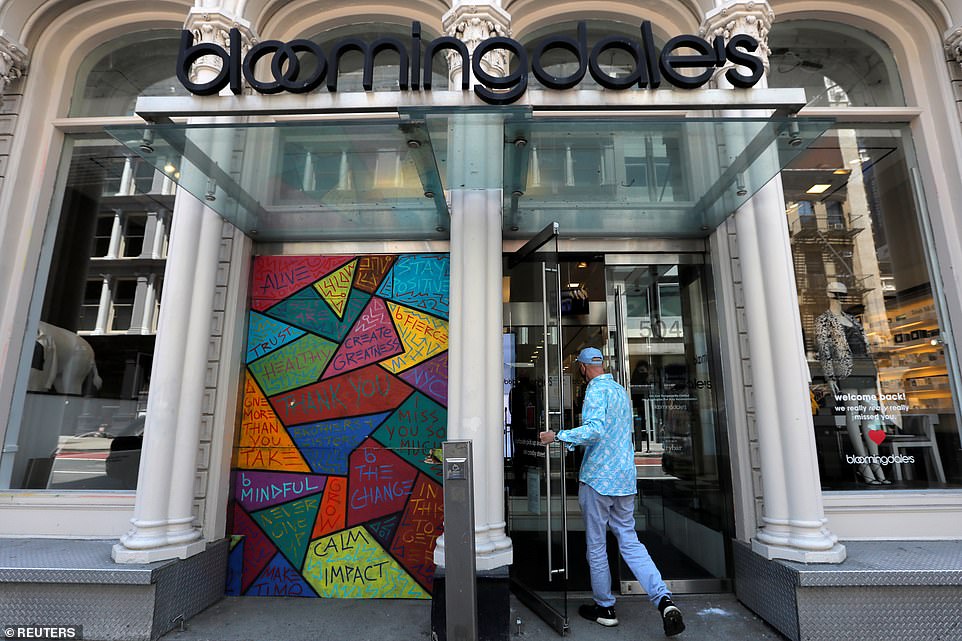 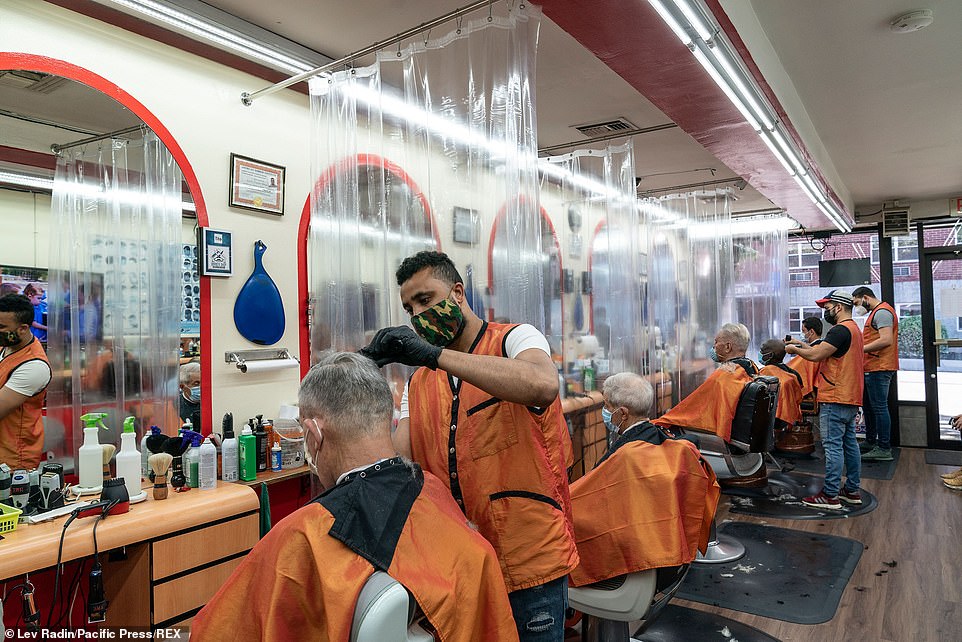 Barbers in the Bronx also put up clear shower curtains to keep customers separated. Everyone was also wearing a mask 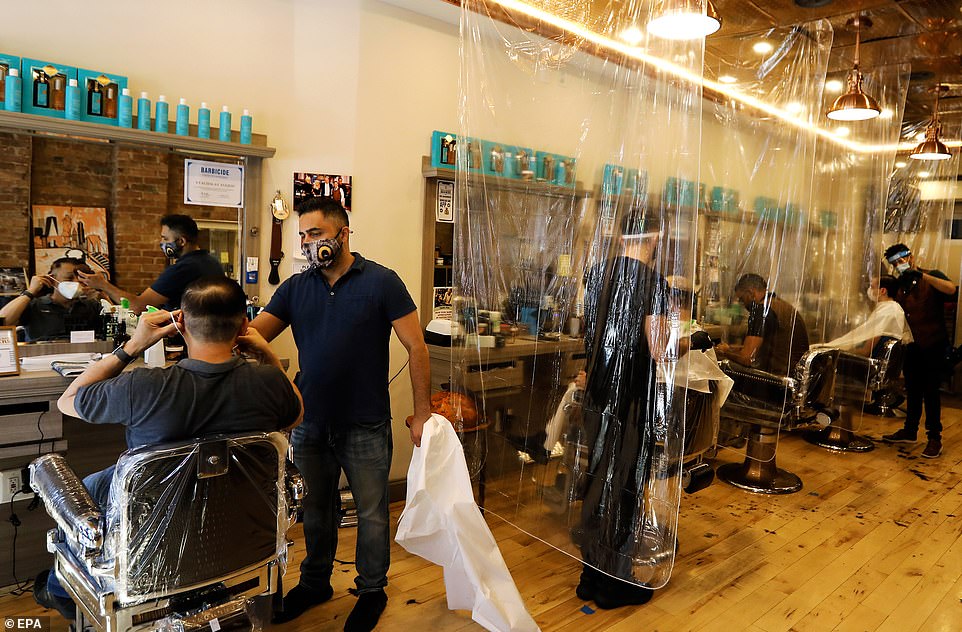 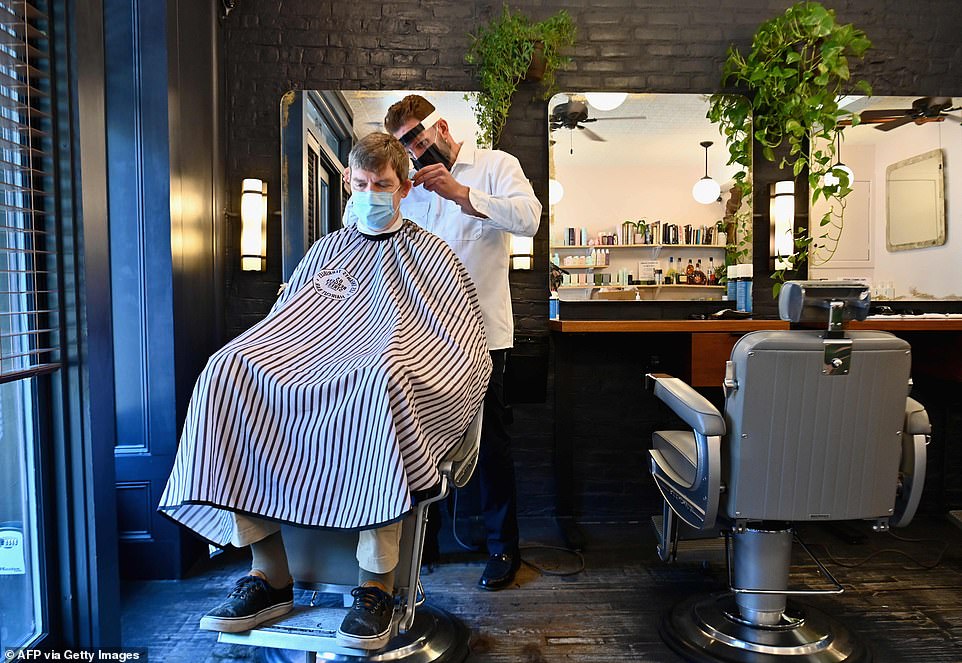 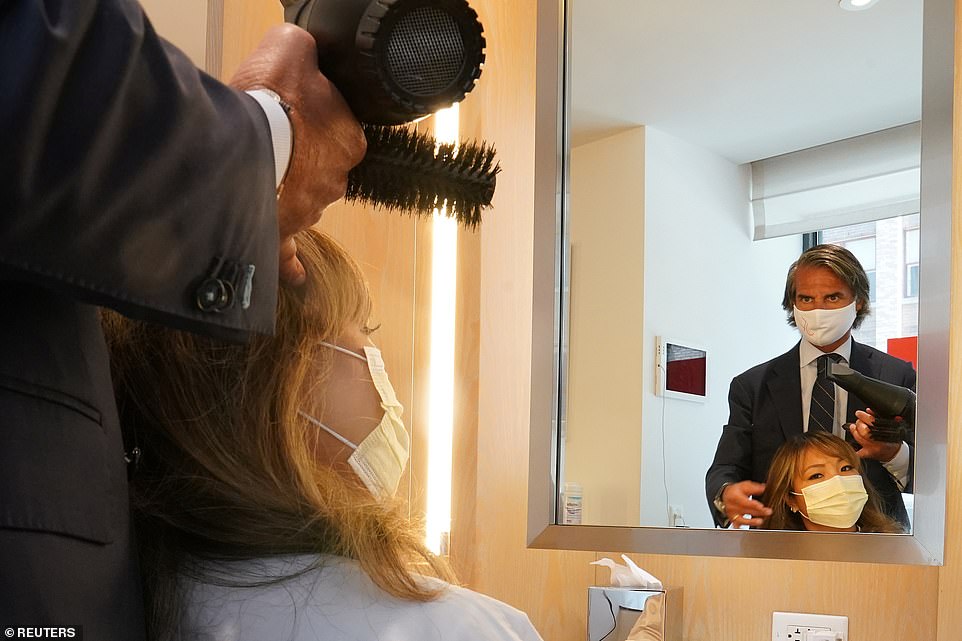 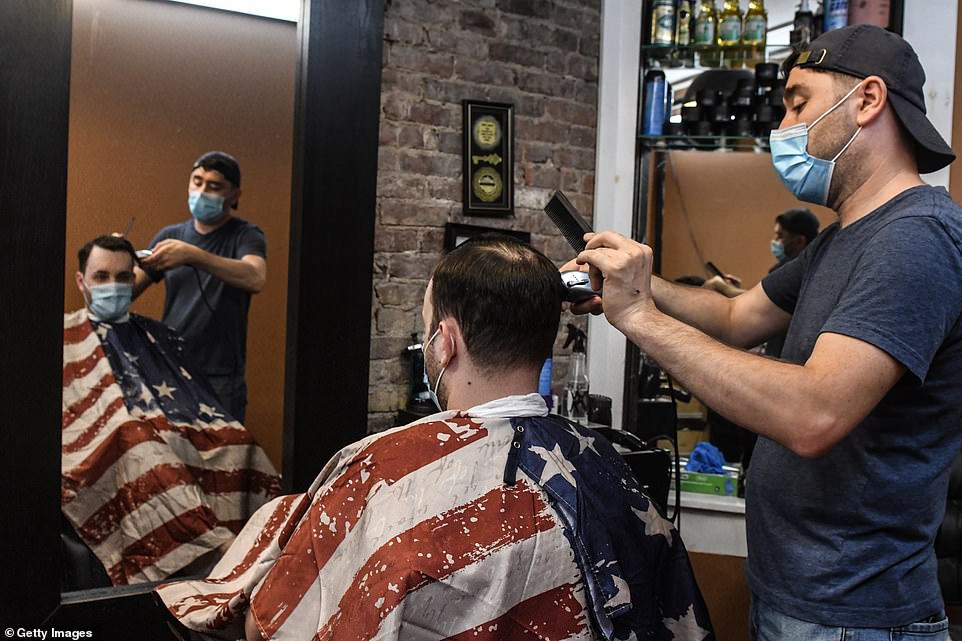 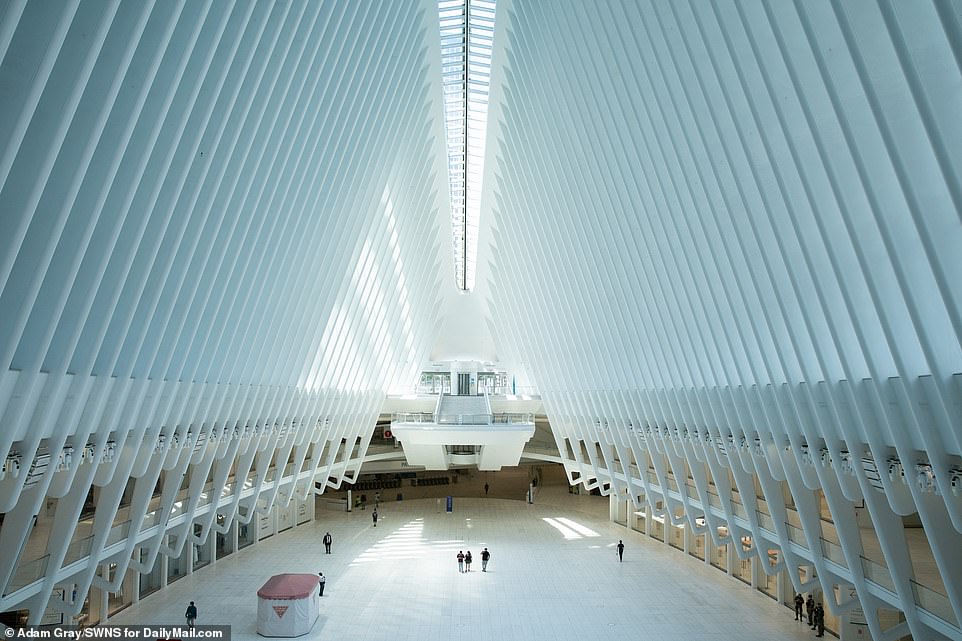 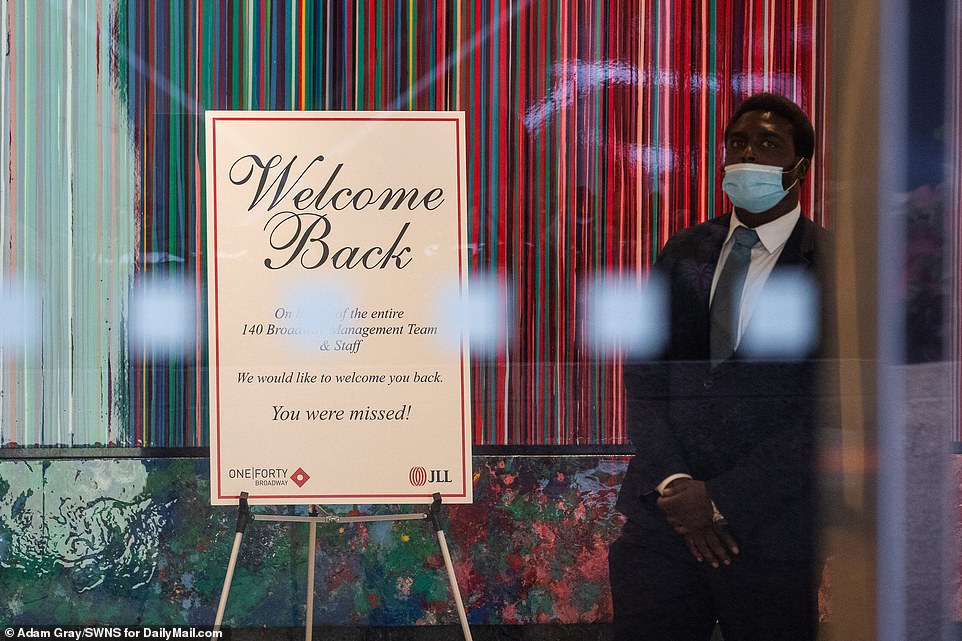 Vorndado, one of the city’s biggest landlords, told investors on a recent earnings call that 80 percent of its retail tenants did not pay rent in April and May.

Empire Realty Trust reported that a quarter of its office tenants did not pay rent.

In a recent survey by Blind of employees from Amazon, Microsoft, Lyft, Uber, Facebook and others, 35.67% said they’d move out of New York to a different state if working from home became more permanent.

Twitter has already told employees they can work from home permanently for the rest of their time with the company, and Facebook and Google are also weighing more permanent options.

What will become of their expansive, expensive Manhattan office spaces as a result remains unknown.

While residential and commercial tenants are still bound by their leases per the moratorium now, there’s growing uncertainty over whether that will always be the case.

‘Landlords’ ability to enforce the legal terms of their lease has been completely kicked out from under them,’ Jane Lok, a landlord who collected half of what she normally does this month, told the Times.

To compound difficulty for the landlords, they can’t borrow from banks because real estate is such a risky investment. 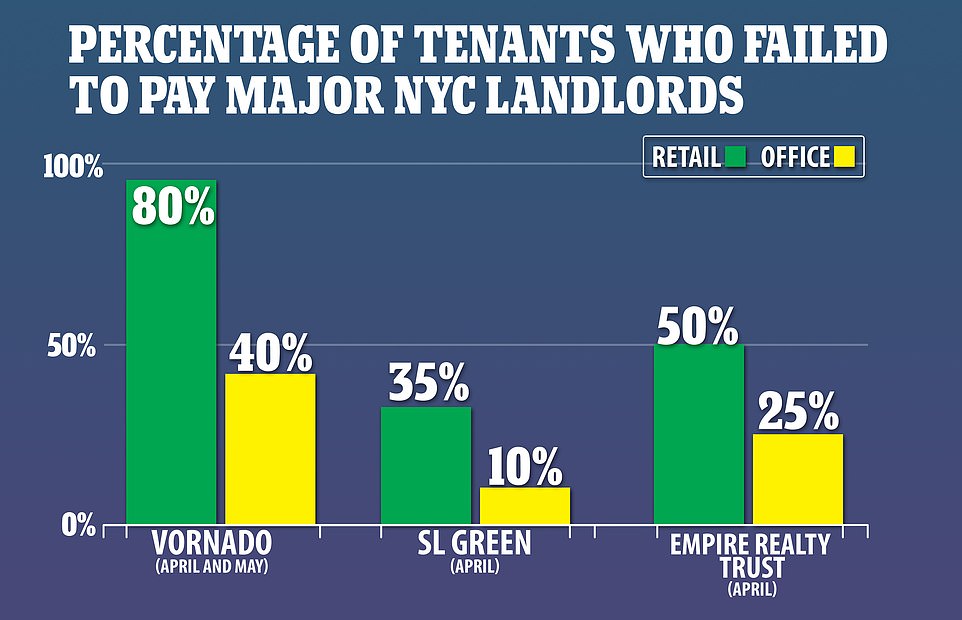