Thousands of felons in New York State have regained the right to vote after Gov. Andrew Cuomo announced Tuesday that he’s issued conditional pardons to 24,086 people currently on parole.

The pardons are the first round in Cuomo’s effort to restore voting rights to people who have served their time in prison but still can’t vote because they remain on parole – in some cases for the rest of their lives after being released.

‘The right to vote is fundamental and it is unconscionable to deny that basic right of citizenship to New Yorkers who have paid their debt to society,’ Cuomo said in a statement. 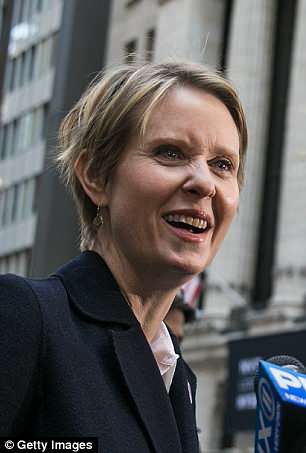 Gov. Andrew Cuomo announced Tuesday that he made the first round of conditional pardons to felons, restoring their right to vote in New York State. He was photographed May 1 at a bill signing event at John Jay College. Former actress Cynthia Nixon is challenging NY Gov. Andrew Cuomo in a September primary. A spokeswoman for Nixon said the former actress has spurred the governor to move farther to the left in his policy decisions. Nixon was photographed May 1 at a May Day protest near Wall Street in Lower Manhattan

Alphonso David, counsel to governor, said the change would strengthen democracy in New York and help reduce recidivism by easing the transition to life after incarceration.

‘If we want people to be fully formed citizens and participate in our communities, we can’t say we expect you to get a job, we expect you not to recidivate (reoffend), but we aren’t going to let you vote,’ David said.

The move comes as the governor faces a potentially grueling primary against former Sex and the City actress Cynthia Nixon. A spokeswoman for Nixon said Cuomo is seeking to appeal to liberals in order to compete with the actress in the September primary election.

‘There’s little doubt that Cynthia has spurred the governor to move farther to the left,’ spokeswoman Lauren Hitt said in a statement. ‘The Governor has gotten heat for being unwilling to make basic reform when it comes to voting rights – New York has no early vote, no automatic voter registration – so this is his acquiescence to that pressure.’

Alphonso David, counsel to governor, rejected that argument, saying the Cuomo has a long record of advancing progressive policies, including legalization of gay marriage and the ban of discrimination against transgender people. He also noted that New York has closed 24 juvenile and adult correctional facilities throughout the state under Cuomo’s leadership.

‘To suggest that the governor is doing this now for political purposes is somewhat offensive, but it also ignores the record,’ David said.

Cuomo has said that his effort was motivated by the goal of reversing inequities that disproportionately affect black and Latino New Yorkers – who account for 71 percent of the population who have lost the right to vote due to their parole status.

‘By delivering this basic right of citizenship, individuals who are acclimating back into society will be empowered to contribute to New York’s democratic process and in turn, help support a better, stronger state for generations to come,’ said Rev. Al Sharpton, president and founder of the National Action Network.

Cuomo’s strategy of conditional pardons allows him to avoid putting the issue before the State Legislature, including the Republican-led Senate, which has rejected a number of the governor’s criminal justice reforms.

The pardons are granted based on a review process which is applied to each individual under community supervision. Officials take into account factors such as how well the felon has integrated with the community and if he or she is maintaining contact with a parole officer.

David said the state expects to review an average of 2,000 felony records each month for consideration under the new policy.

Felons can’t apply for the pardon; the Department of Corrections and Community Supervision automatically submits a list of parolees to the governor’s office each month for evaluation.

The pardons neither expunge the felons’ criminal records, nor restore other rights lost upon incarceration, such as the right to own a gun.