New York officials began the massive task of getting lower Manhattan back to normal yesterday after cops in riot gear cleared out the remaining Occupy City Hall protesters.

The officers moved in at 3.40am yesterday, pushing around 70 remaining occupants – said to be a mixture of activists and homeless – north on Centre Street to Foley Square, where the crowd began to disperse.

Police said they gave the occupants a 10 minute warning before the Defund the Police activists ‘left voluntarily’.

But the protesters left behind scribblings of graffiti lining the floor, walls and the Brooklyn City Hall subway station after the month-long demonstration, as well as some more unsanitary reminders of their stay. 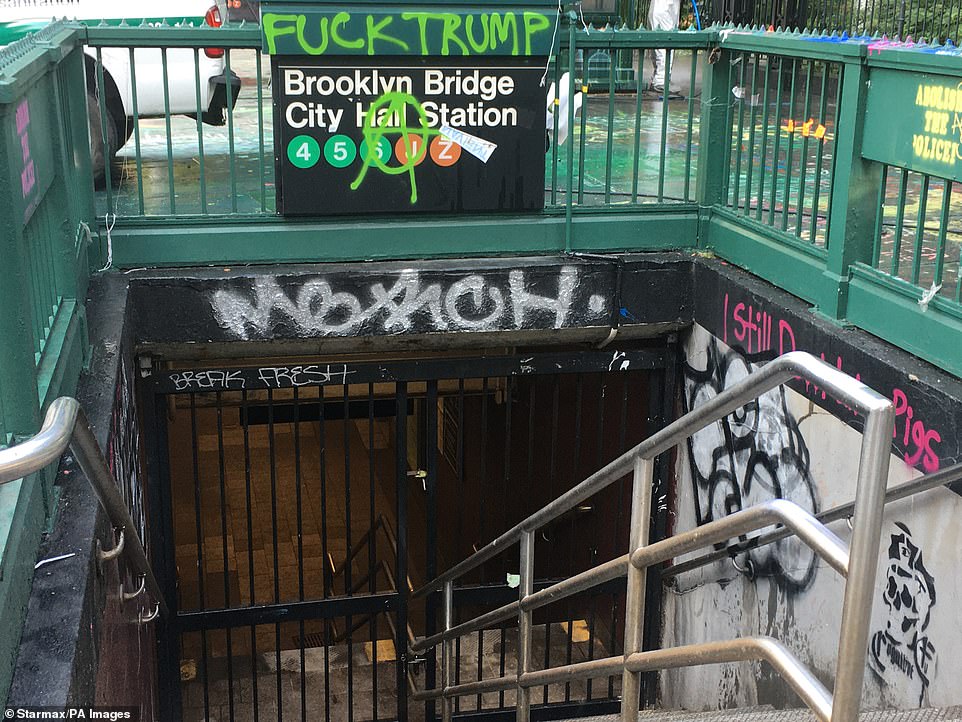 A Manhattan Transport Authority boss revealed to the New York Post that the protesters had turned the City Hall subway gates (pictured), which they had camped around, into a toilet 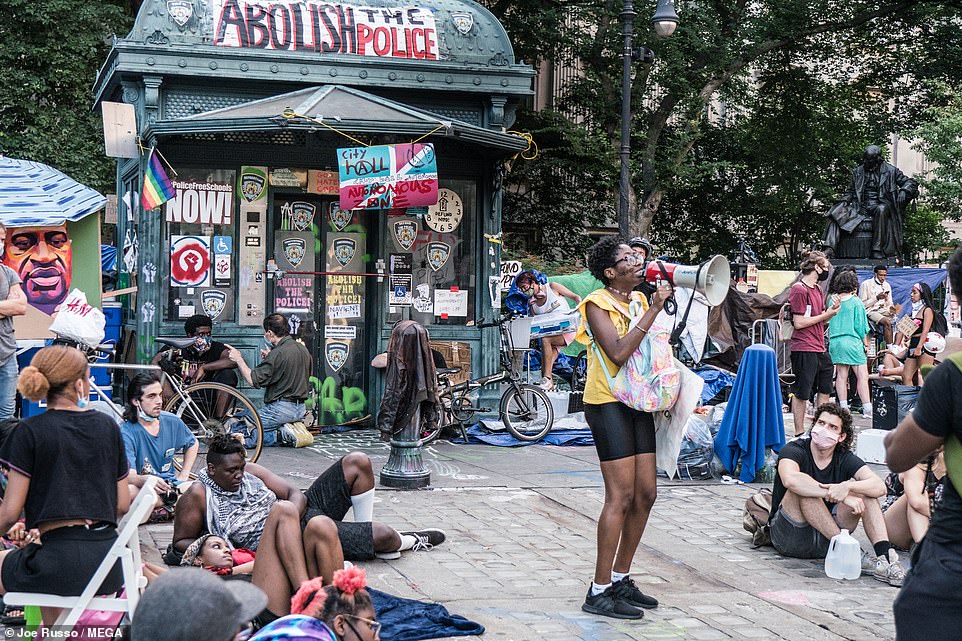 A Manhattan Transport Authority boss revealed to the New York Post that the protesters had turned the subway gates, which they had camped around, into a toilet.

‘All the people who were here were going to the bathroom in the vents,’ the transit chief said.

A group of transit workers are currently tasked with removing the brown sludge from between the subway grates, from near the Citi Bike rack and on the plaza on the corner of Chambers and Centre streets. 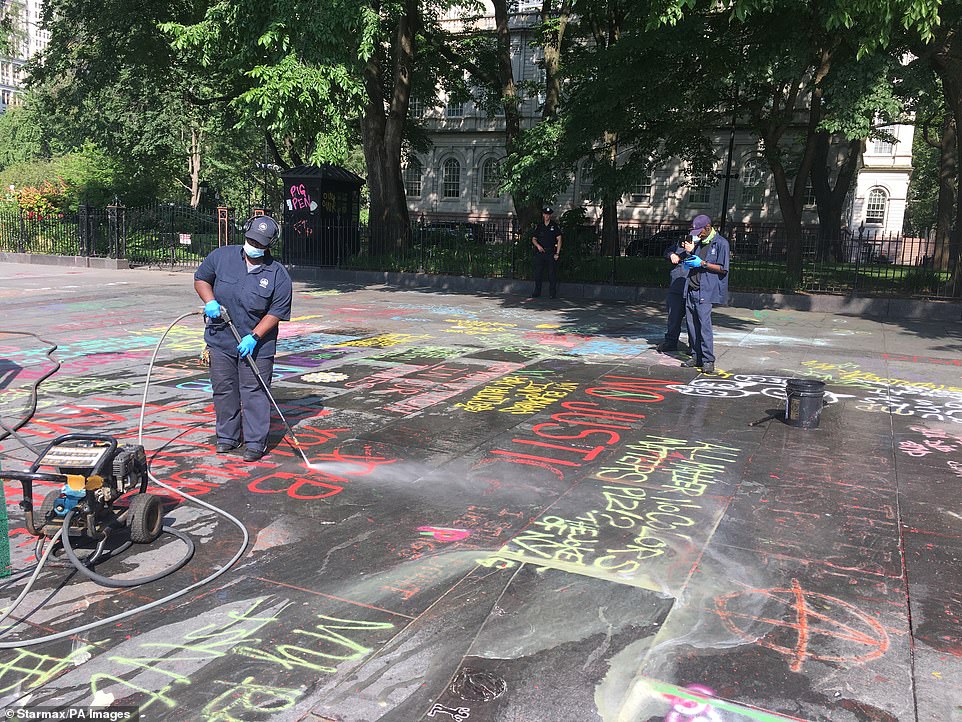 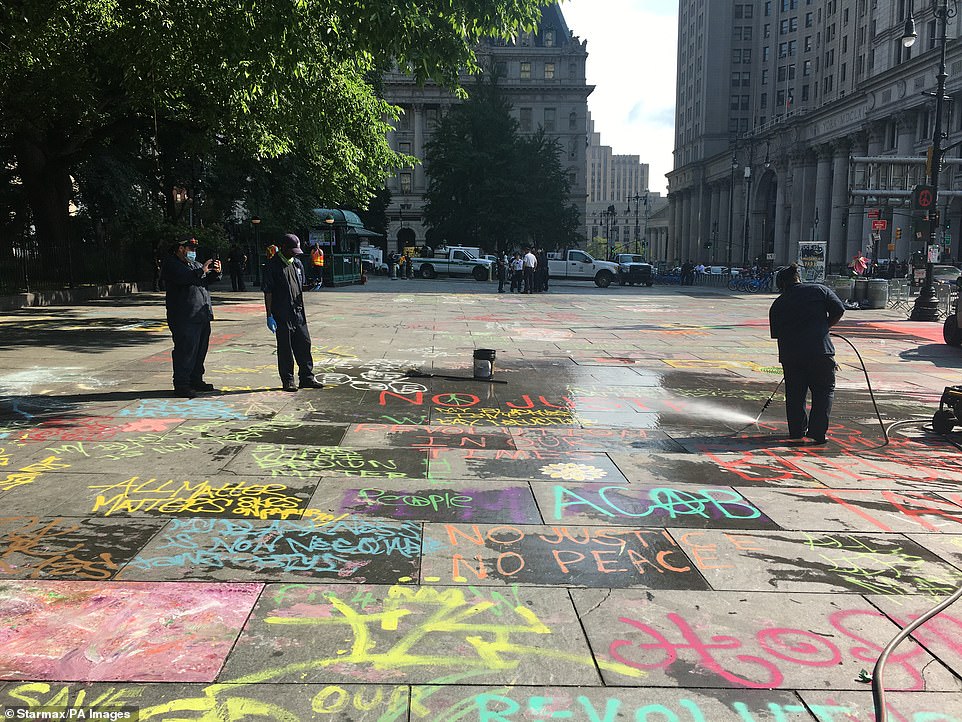 Occupy City Hall is cleared out by NYPD Police Officers after months of occupation by BLM Protesters and homeless people. A heavy NYPD presence surrounded the park and cleaning crews removed graffiti and signs from the area 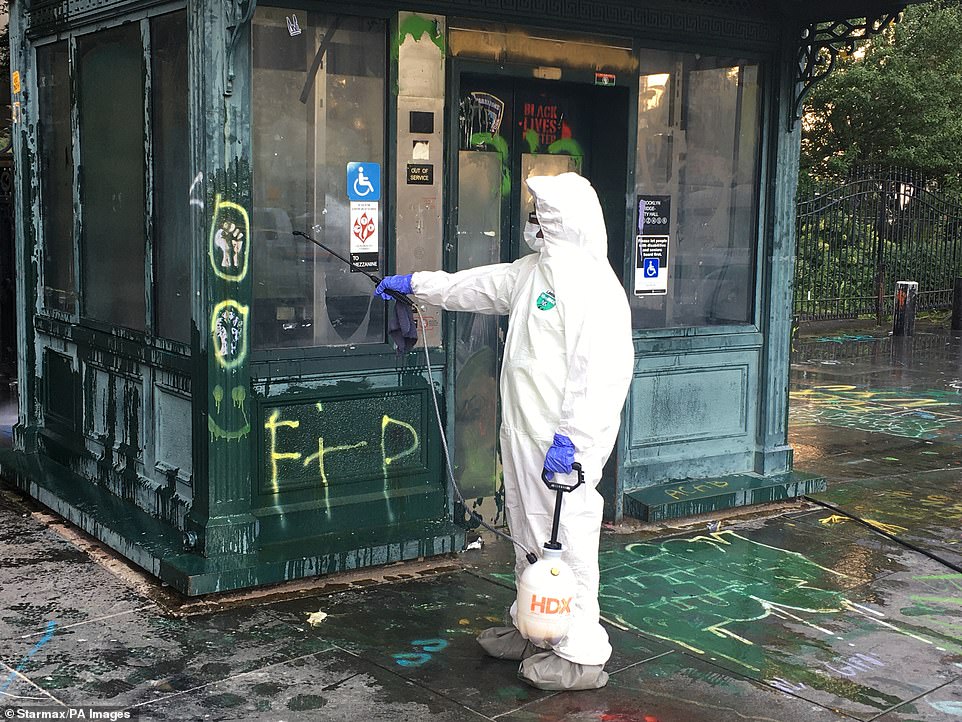 Pictured: City cleaners use sprays to remove graffiti from the New York City Hall subway station after a month-long sit in

An MTA spokeswoman said a vacuum team was deployed to remove everything at the entrance to the subway, adding that ‘nothing got onto the trains.’

One of the clean up workers, however, said that there is a persisting smell from the feces and urine.

Anthony Lupo, 31, who lives nearby, said he saw people from the group relieving themselves ‘right out there in public for everyone to see.’

‘It was disgusting,’ he added.

After the NYPD cleared out the encampment yesterday, officers tore down makeshift tents that the activists had been camping in, throwing them into garbage trucks.

A few hours after clearing the camp, cleaning crews had arrived to jet wash the graffiti from the walls and floor around City Hall.

Police told the New York Times that the clean up of the graffiti alone could take weeks to complete. 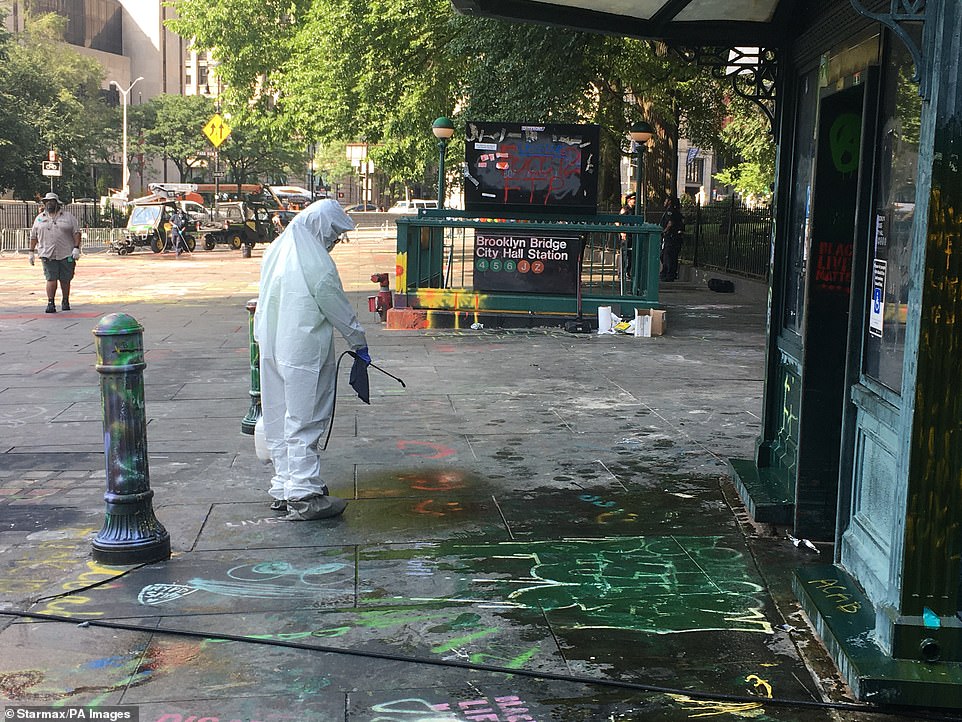 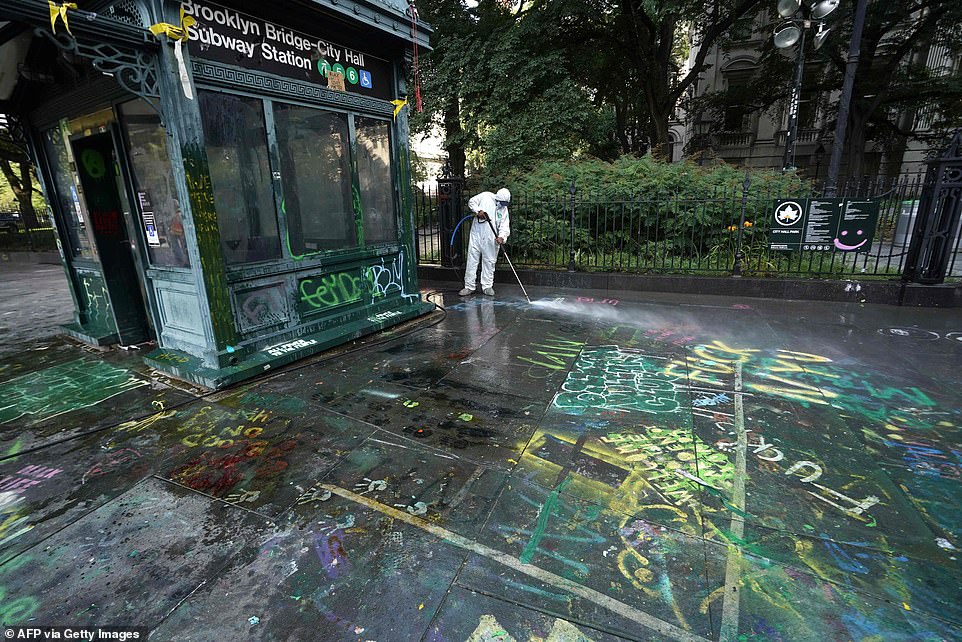 ‘The graffiti is just another manifestation of the city in decline,’ Gov. Andrew M. Cuomo said yesterday.

The park outside City Hall will now be on lockdown for weeks as clean-up crews move in to clear debris and graffiti from nearby buildings and statues.

In total, seven people were taken into custody during the operation to remove the squatters but charges are still pending.

One officer was injured after being struck by a brick, police said. Whether any protesters suffered injuries could not immediately be confirmed by the department.

After successfully moving the crowd on, the officers then began to take down the makeshift tents and remnants of the encampment, which first began on June 23 as a protest for police reform in response to the deaths of George Floyd, Ahmaud Arbery and Breonna Taylor. 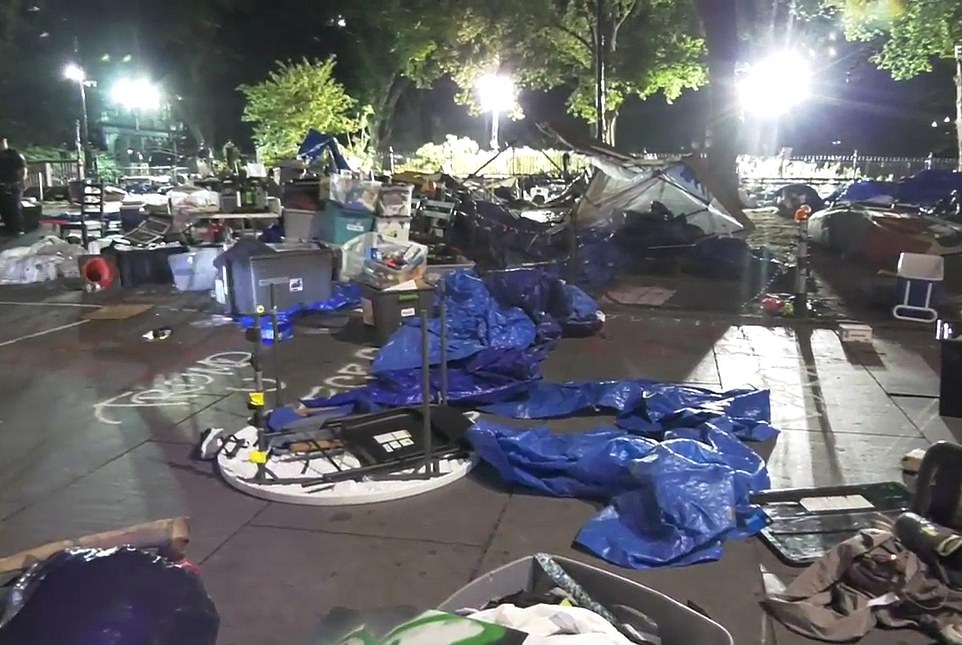 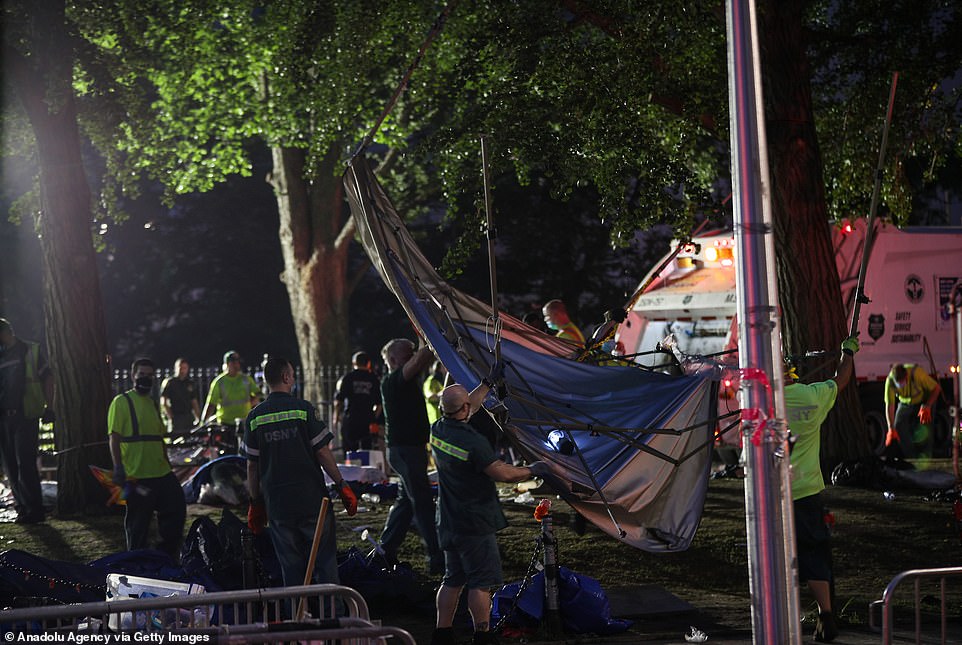 After successfully moving the crowd on, the officers then began to take down the makeshift tents and remnants of the encampment 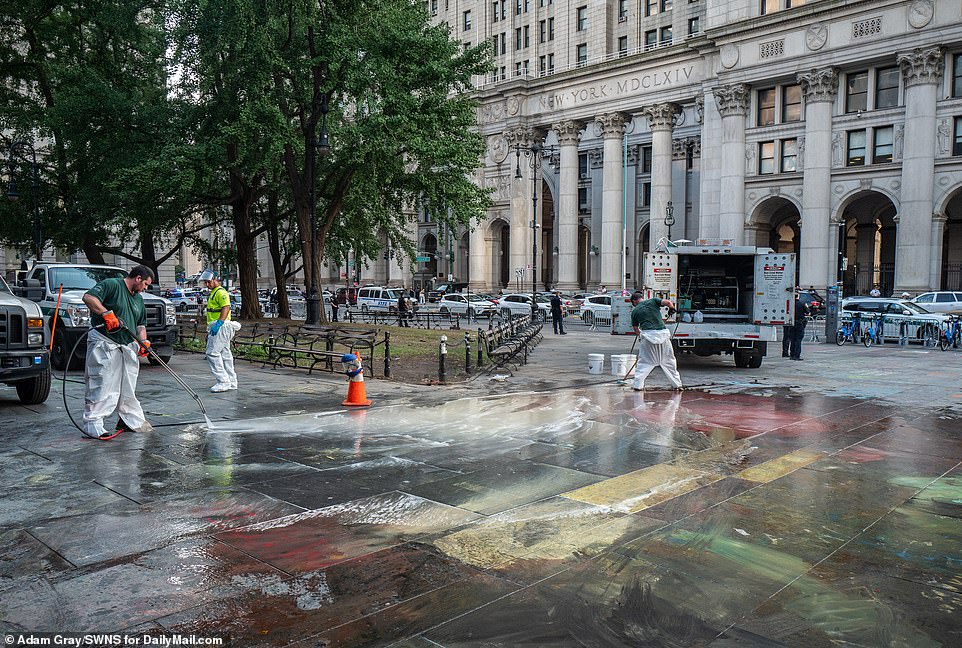 Video footage captured the moment the officers, donning heavy gear, moved in on protesters who were heard chanting as they approached.

ABC 7 observed two people being taken into custody. One man also appeared to have suffered a medical condition and was taken away in an ambulance.

The NYPD temporarily shut down the near-by Brooklyn Bridge while they carried out the operation.

The goal of the Occupy City Hall demonstration – similar to the Occupy Wall Street movement of 2011 – had been to secure at least a $1 billion cut from the NYPD budget.

After the reform was approved by City Hall earlier this month, and signed into law by Mayor Bill de Blasio last week, organizers of the protests and many of its members left. Only a few stayed, with the majority of the crowd made up by homeless people.

De Blasio’s administration has long stated homeless encampments are no longer permitted in the city, and had been closely monitoring the encampment to determine if it was still operating as some form of protest.

The mayor stated on Tuesday that he had no immediate plans to shut down the encampment.

‘That decision will be made by the NYPD as things emerge. We’re looking at the situation every day,’ he said at a press conference.

‘We’re trying to assess regularly,’ he continued. ‘It’s an American value to respect the right to protest. I’ve also said we don’t allow encampments around this city.’

However, hours later de Blasio approved the operation, which has long been planned by the NYPD. The mayor has not yet spoken out about the overnight action.