NYC woman was almost crushed in Tortola flat during Irma

Weeks before Hurricane Irma blasted through the Caribbean, the island of Tortola had been a sunny, idyllic holiday destination – just about 2,000 miles southeast of the U.S.

Today, the largest of the British Virgin Islands, is almost completely flattened, decimated, after suffering the brunt of the record-breaking Category 5 storm.

This past spring, I decided to trade in my job in a New York City high-rise office building for a position as a local news reporter in sunny Tortola.

But only a few months into my new life on the beach, while working for the BVI Beacon, I witnessed how the island transformed from paradise to ruins.

Buildings are now reduced to nothing but splintered pieces of wood and debris strewn across the ground resembling a plane crash.

American journalist Amanda Ulrich, 23, tells how she spent hours hiding in a shelter while Hurricane Irma battered the island of Tortola, British Virgin Islands (pictured before the destruction)

The apartment I shared with my roommate caved in and crumbled away, and nearby homes are now inhabitable after their roofs and windows were ripped off.

But, two weeks ago, when Irma was just gathering strength and making its way toward the Leeward Islands, only a few Tortola residents were panicking.

Many businesses initially told their employees to plan for a day or two off the grid and to meet back up in the days following the hurricane.

Those plans quickly changed on Tuesday, September 5, when Irma was upgraded to a Category 5 storm, threatening ‘catastrophic’ damage.

At that point, the island community picked up the pace. Across the hillside surrounding Road Town, the main commercial hub of Tortola, you could hear the hammering of nails as residents boarded up their windows with cheap plywood.

Grocery stores were packed with customers stocking up on supplies, and there were reports that some shops had run out of water as demand climbed higher.

That night, the island was eerily quiet as families returned to their homes, locked their doors and waited. 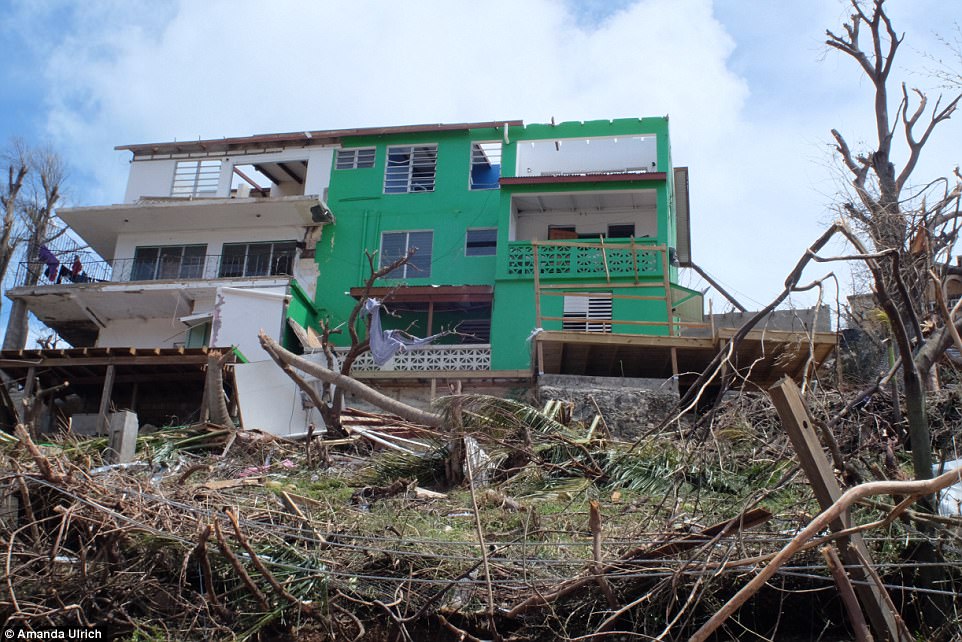 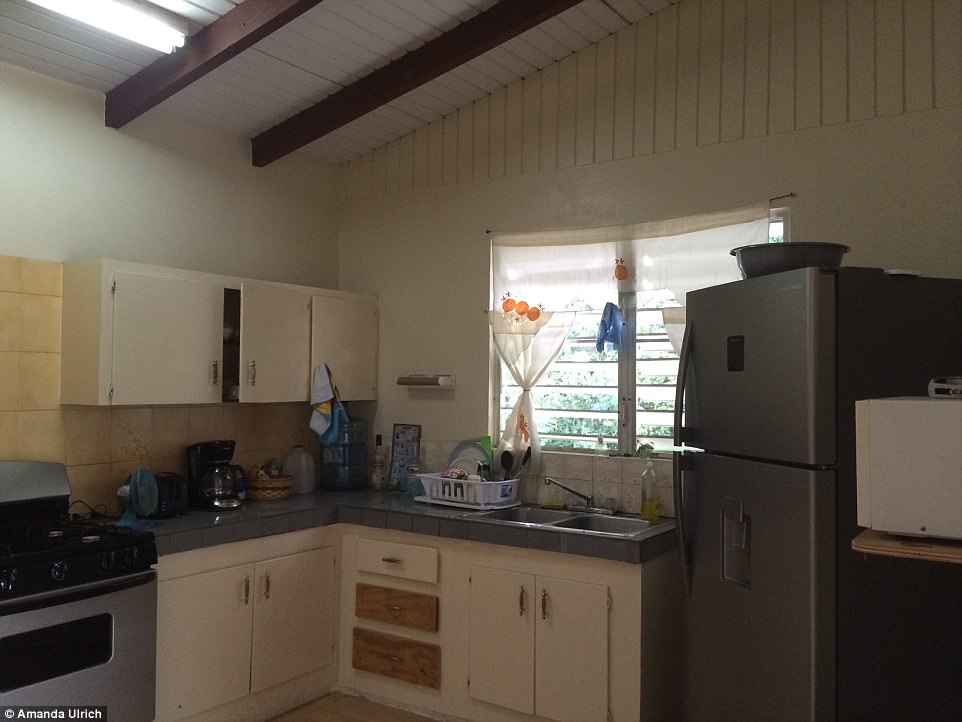 Before: The kitchen in Amanda’s apartment was clean and put together just days before the storm hit 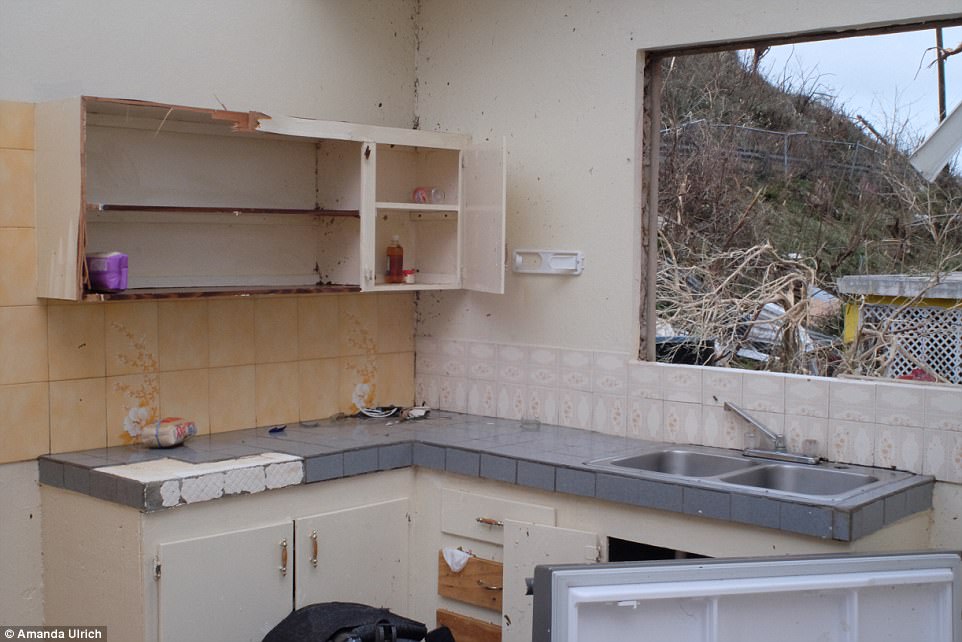 After: The same kitchen is now destroyed as the roof was torn off, cabinet doors were ripped off their hinges, pieces of the counter tops flew off, and the window is now a gaping hole to the outside

Early the next morning, the wind began.

Buckling walls, crashing roofs – by 10am, my roommate and I fled our apartment.

It was a mostly concrete structure tucked into the hillside, but we had been advised that our wood-paneled roof would be one of the first things to go.

Because several of our windows didn’t completely close and wind speed had been clocked at 190mph, it was likely to rip off piece by piece.

We took shelter in a vacant apartment downstairs, at about 11am, the wooden boards were ripped off and shortly after, the windows and screens followed.

The hurricane was no longer a threatening outside force, instead it had taken over the building entirely.

Wind and driving rain whipped through each room, throwing furniture against the walls, toppling a giant shelf of glass figurines and smashing the front door off its hinges.

The kitchen was a lost cause, too, and as the windows gave in, dish after dish flew out of the cupboards.

Around noon, we packed into a bedroom and attempted to barricade the door. The air pressure in the room was so great that our ears popped. We could hear rats scuttling behind forgotten boxes in the corner. 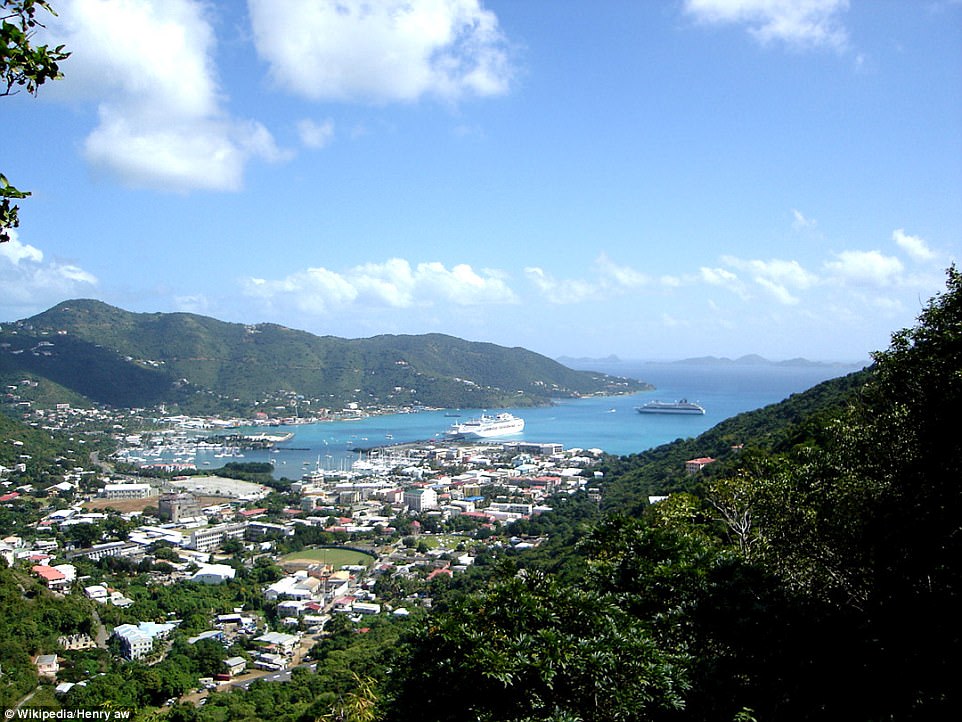 Tortola, the largest and most populated of the British Virgin Island was once an idyllic holiday destination in the Caribbean 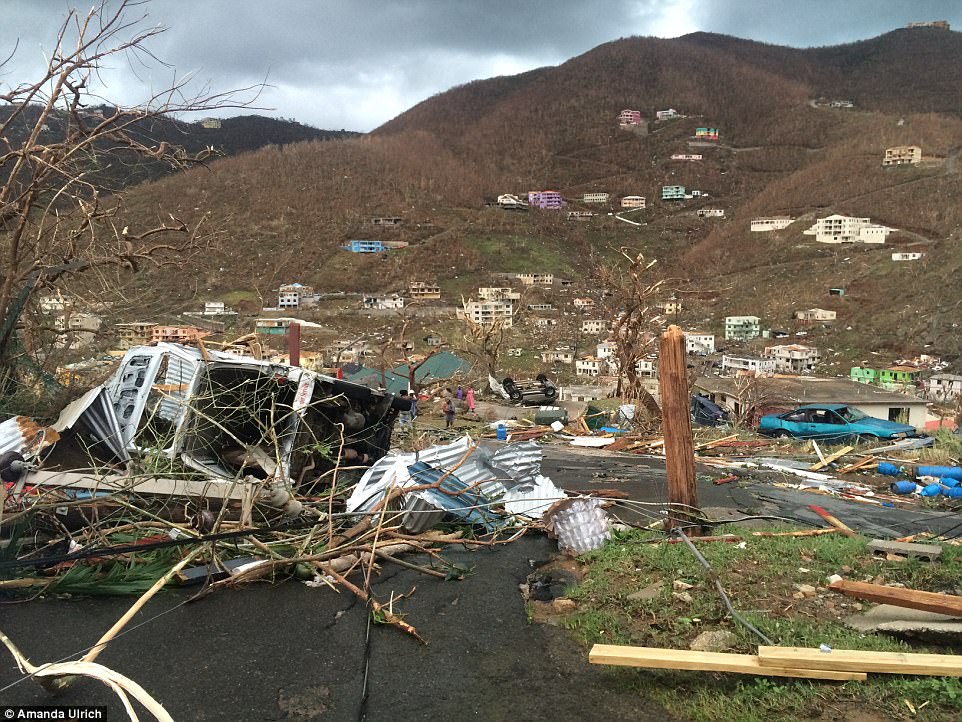 In total, 80 percent of all the structures on Tortola has been damaged or destroyed. At least five people were killed

By some small miracle, about twenty minutes later the place was silent again; the eye of Irma was passing directly over Tortola.

We had been told never to leave shelter during those fleeting minutes, but in the absence of crashing palm trees and airborne cars we heard screaming from above us.

Our neighbors, Jason and Sabrina, had stayed in their top-floor apartment and had watched as the roof ripped off above them. They had moved from room to room as the wood and tin peeled off, finally diving underneath their bed to dodge flying debris.

Now, they climbed over sheets of metal, broken doors, and household items to reach us. Jason was barefoot, and a piece of glass had embedded itself into the sole of one foot. He didn’t seem to care.

Once outside, a sickening reality set in. The town was decimated.

Homes and offices that were once obscured by trees stood out starkly against the mountain.

People were running in the streets and throughout the rubble of their homes; the private was now public because most roofs and many walls had ripped away.

Some buildings were reduced to nothing but splintered pieces of wood and debris strewn across the ground like a plane crash. 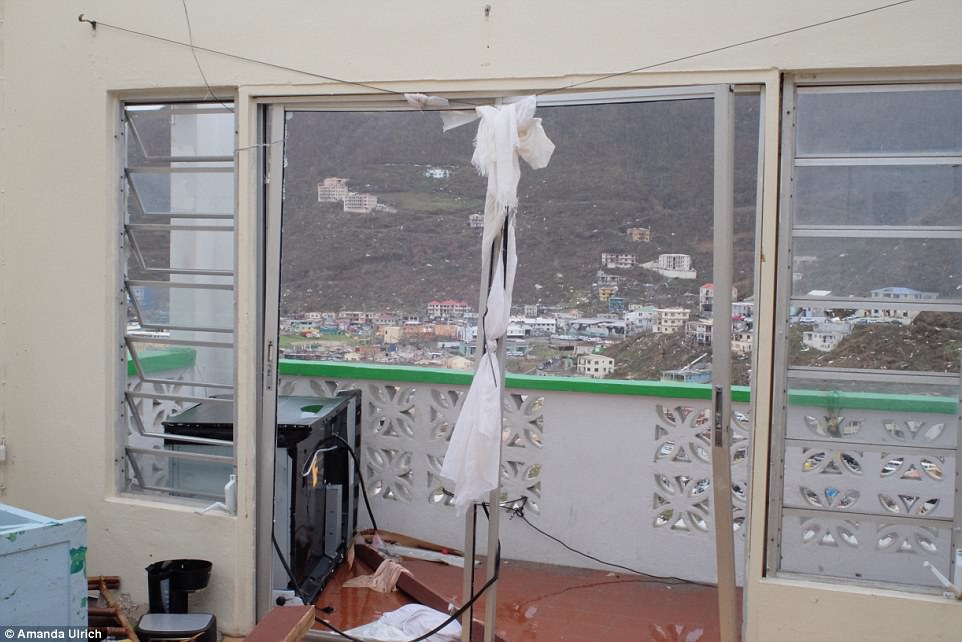 After the storm, Amanda returned to find her apartment destroyed, as the refrigerator ended up in the living room and the oven (pictured) flew onto the balcony. In the bedrooms, smashed doors lay in pools of rain water and the bathroom mirror was flung off the wall 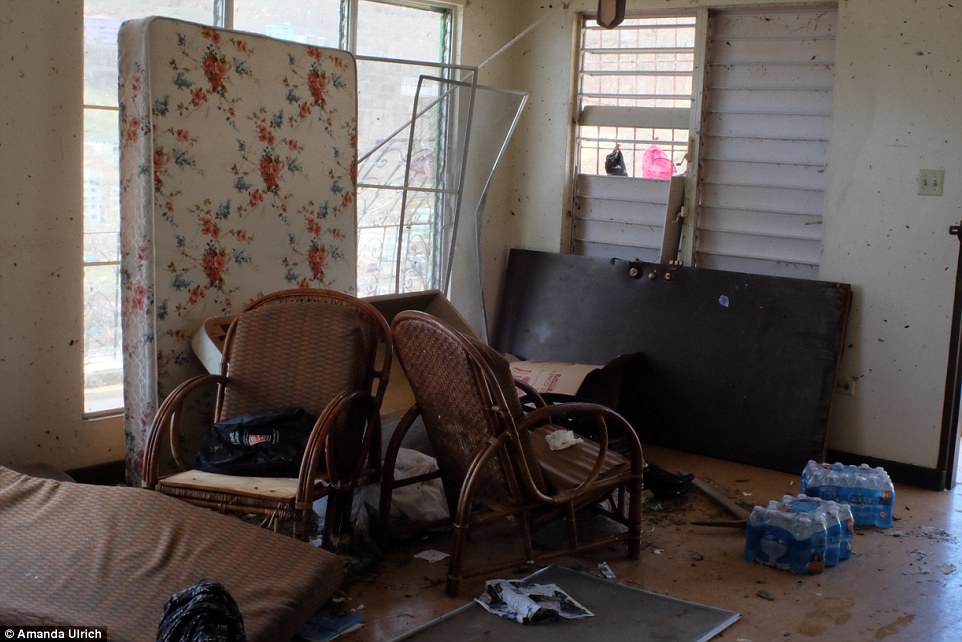 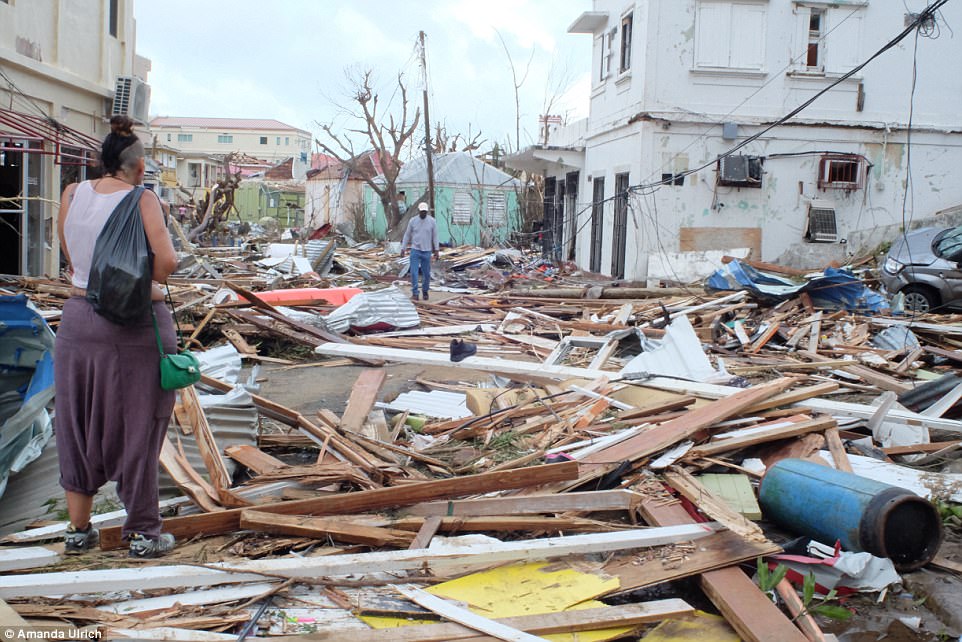 Ruins: Residents of Tortola walk among the rubble days after Irma blasted through the island 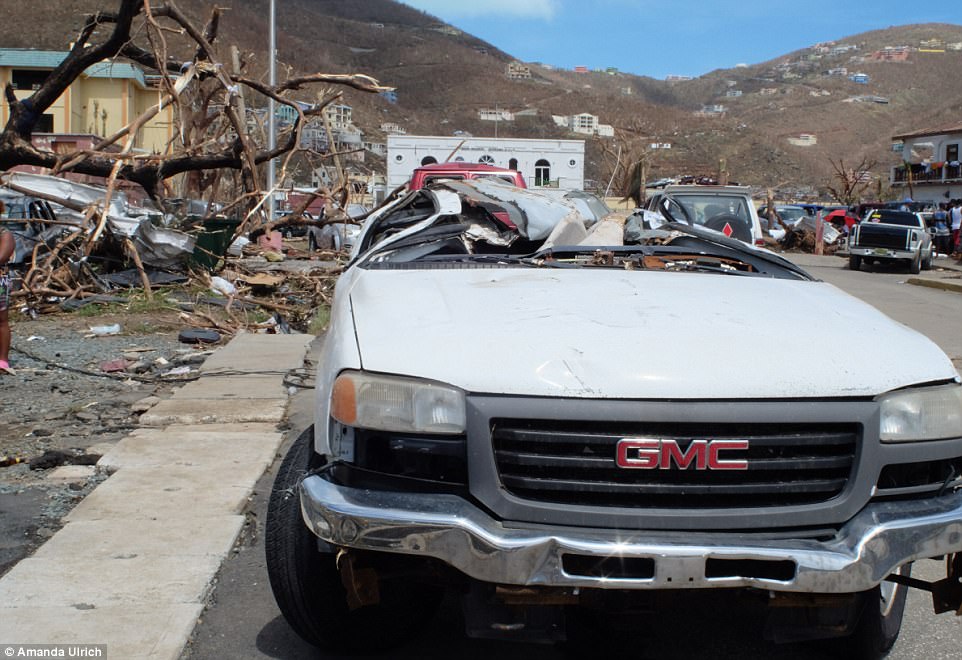 A parked white car was crushed and totaled after the storm ravaged Road Town, Tortola

As we looked over the balcony of our building, we realized half of the apartment below was destroyed.

We were friends with the man who lived inside, and yelled his name over and over again into the wreckage.

We only got word that he was alive four hours later; he told us that despite covering his windows and buying supplies, at the last minute he got the feeling he should leave and ran to a friend’s house nearby.

But as quickly as it had become calm during the eye, the winds came back in a fervor. The small group of us ducked back into our makeshift shelter.

This time, the wind and rain coming into the house was too much for the bedroom door. The flimsy wood cracked in half and was sucked out into the living room. The tremors in the walls got stronger.

For one fleeting minute, I imagined the walls, the roof, all that cement, caving in and crushing us.

It was a very real possibility. I hoped it would be quick.

But after that one morbid moment, I shut off my mind to any other dark thoughts. If I let myself think about what could happen – rescuers finding us after the fact, my family being notified about what had happened – then I wouldn’t be able to focus on what was more imperative: the exposed door frame.

In a panic, we found a metal guard rail and braced it against the gaping door. We found a single foam mattress in the closet and pushed it over the rail last, hoping that any flying debris wouldn’t be able to get past the crude barrier.

Our new door stood up to the driving winds, but for hours we cowered in one corner of the bedroom, wincing every time something smashed into the metal window slats, which had become loose and were slamming open and closed erratically.

Hours later, Irma’s wrath was over.

By the time we unlocked ourselves, it was dark out, and for a second time we made our way out to survey the damage.

My roommate and I found our apartment unrecognizable.

The front door was still on its hinges, but the wind had pushed through the deadbolt and forced it open. Mostly everything else was destroyed. 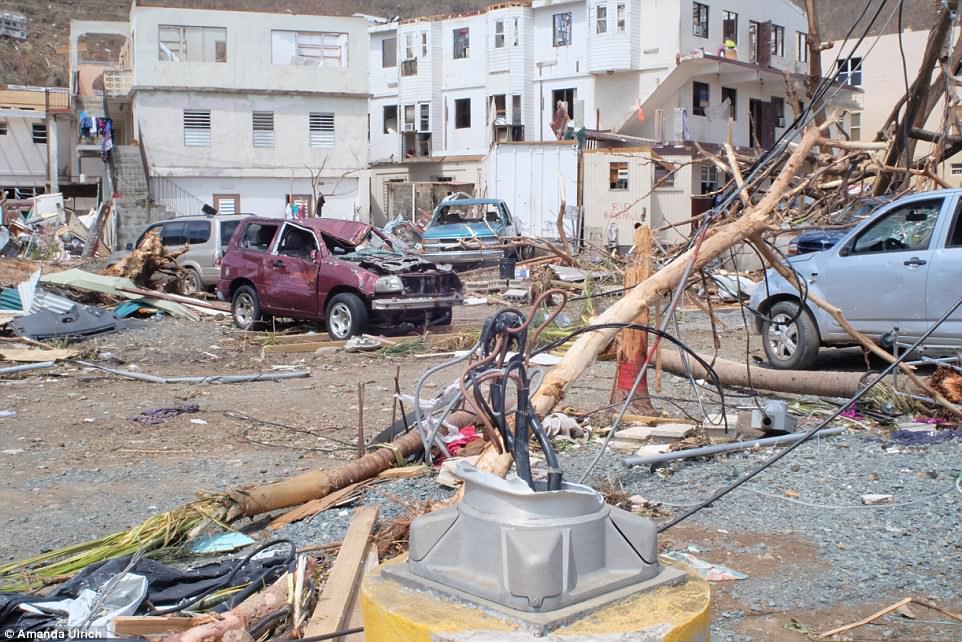 After the storm Amanda surveyed the town, climbing over flipped cars, tree trunks and telephone poles, to see what was the left of the island 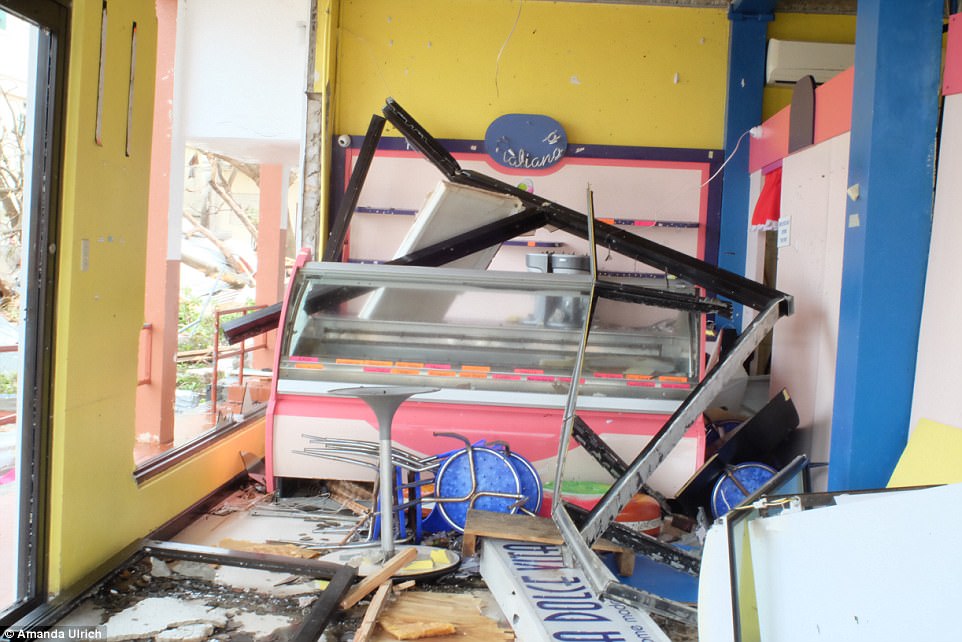 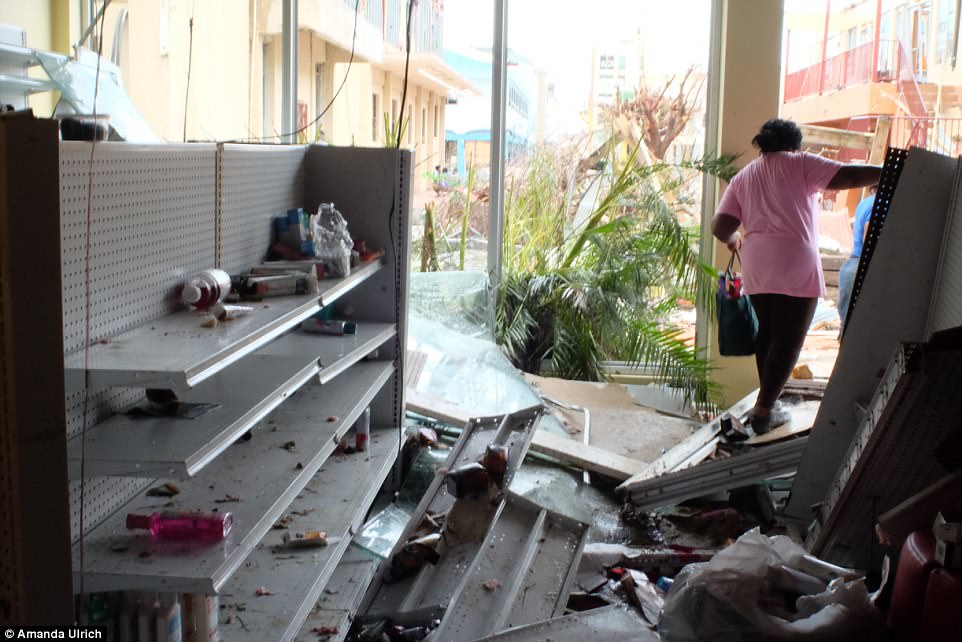 A woman walks through the wreckage of a Road Town pharmacy, carrying bags of looted items

Every single window had not only been smashed, but the metal frames had gone with them, leaving exposed concrete holes. The roof was gone completely in the kitchen and living room, and our two bedrooms had new, yawning skylights.

The refrigerator was now laying on its side in the living room and the oven had somehow flown 15 feet onto the balcony.

All the food and water we had stockpiled in preparation was now floating in five inches of water on the floor.

In my room, even the sheets had ripped off the mattress and had sailed out the window. The bedroom door was in pieces on the floor, half submerged in rain water.

The only thing in the building still unsoiled – or intact at all – were my clothes hanging in the closet. Not a single item had fallen off a hanger.

That night, we had no choice but to sleep in the semi-flooded bedroom downstairs we had just hid in for hours. I slept with a flashlight in my hand and woke up instinctively every thirty minutes, switching it on and checking for rats.

On Thursday morning, we woke up to the sound of sheet metal scraping against the ground and shouting from a neighbor. He had hiked down the hill at 5am to tell Sabrina, our other new lodger, that her sister was still alive.

As I trekked into town to check on friends, climbing over flipped cars, tree trunks and telephone poles, it seemed as if the whole town had a story to tell.

One of my co-workers who had offered to house five kittens from the animal shelter was forced to leave them behind in a closet when her roof flew off. Hours later, the kittens were still safe, yowling away.

A 72-year-old woman who lived near me had been alone in her house during the storm. After the concrete walls of her living room buckled and fell around her, she said, she scrambled to her kitchen and hid in the small space under the sink.

‘This used to be my house,’ she said while standing among the ruins, almost amazed at the statement.

Another friend had taken shelter in a bathroom closet. For several days afterwards, he survived by drinking water from a shower head and rationing a few cans of beans.

In total, 80 percent of all the structures on Tortola had been damaged or destroyed. At least five people were killed.

‘Thank God for life,’ an older man said as I passed him in town.

In the days following Irma, any semblance of normal life was suspended.

Over 100 inmates at Her Majesty’s Prison in East End escaped, some merely checking on loved ones and returning, others not coming back at all.

Tortola residents who had lost food and water during the hurricane also felt forced to loot major grocery stores and pharmacies, walking blind in the darkened aisles over broken bottles and grabbing anything off the shelves.

Countless people had been squatting in the one or two small rooms of their homes that hadn’t been destroyed, and police came by and officially condemned several of the buildings. Entire families found themselves homeless and were forced to sleep at shelters or try to stay with friends.

The threat of hurricane season still looms large, however, especially as Hurricane Maria made landfall in Puerto Rico on Wednesday morning. The eyewall passed slightly to the west of the British Virgin Islands, but the territory still saw heavy wind and rain.