During a closed-door CompStat meeting on Thursday, a deputy told Chief Terence Monahan that cops were worried about the new law, which prevents them from  kneeling on a suspect’s chest or back during an arrest.

‘They’re concerned about [taking] a bag of crack off the right person, the right dealer, and their knee accidentally – unintentionally – going on their back,’ Deputy Chief Brian McGee said.

Monahan interrupted, saying officers shouldn’t be scared because the city’s district attorneys won’t prosecute, according to video obtained by the New York Post.

‘We can’t be afraid. We’ve got every [district attorney] come out and say they’re not going to charge that,’ Monahan told his colleagues.

NYPD Chief Terrence Monahan told police during a closed-door meeting on Thursday that cops can’t be afraid ‘to do what we do’ and said that scared officers ‘end up dead.’ Pictured: Monahan speaks during a press briefing 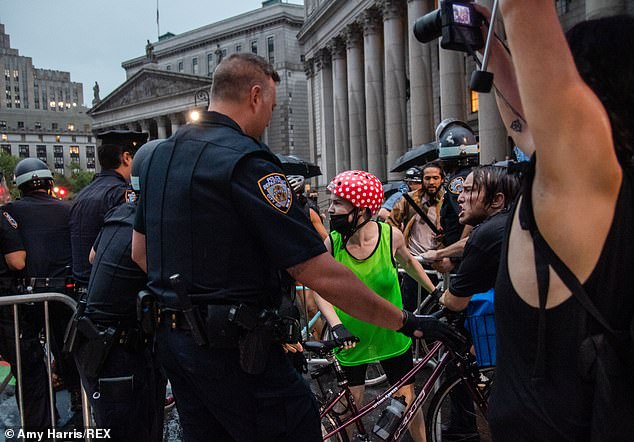 The comments were in reply to a deputy, who told Monahan that officers were afraid of accidentally breaking the city’s new law banning chokeholds. Pictured: Protestors and cops clash during a march from Union Square to City Hall at the Power to the People March, July 22

Monahan then referenced an incident on the Brooklyn Bridge last week in which he was injured by a protester.

‘You know what? I wasn’t afraid when I was fighting the guy on the Brooklyn Bridge,’ Monahan told McGee.

‘We can’t be afraid. Do you know what happens?…What happens to afraid cops is they end up dead.’

The video obtained by the Post then appears to drown out Monahan’s words as officers begin speaking to each other.

WHAT DID NYPD CHIEF TERENCE MONAHAN TELL COPS DURING MEETING?

The New York Post obtained a video of Chief Terence Monahan speaking to NYPD members during a closed-door meeting on Thursday.

During the meeting, a deputy said his officers were worried about breaking the city’s new law banning chokeholds.

Here is what Monahan replied:

‘You know what? I wasn’t afraid when I was fighting the guy on the Brooklyn Bridge.

‘We can’t be afraid. Do you know what happens?…What happens to afraid cops is they end up dead.

‘And that’s what happens

‘That’s why there are so many guns out there. We can’t be afraid. We’ve got every [district attorney] come out and say they’re not going to charge that.

City Councilman Rory Lancman, a staunch supporter of the chokehold ban, told the New York Daily News that he was appalled by Monahan’s comments.

‘I don’t know what’s worse: a roomful of NYPD commanders admitting that up until now no one has taken seriously the Department’s own Patrol Guide or the Chief of Department telling cops to ignore the law because he thinks district attorneys won’t enforce it,’ Lancman said.

Patrick Lynch, the head of the Police Benevolent Association, told the Daily News that Monahan is wrong about city prosecutors.

‘If every DA believes that, they need to say so publicly to the cops on the street,’ said Lynch.

‘Otherwise, we have to assume that we are risking arrest any time we lay hands on a criminal who won’t go quietly. Chief Monahan’s head-in-the-sand mentality isn’t helping us do our job.’

News of the meeting comes just one week after Monahan, two lieutenants and a sergeant were injured in two separate incidents on the Brooklyn Bridge.

According to an NYPD spokesperson, Monahan and other officers attempted to arrest someone who had jumped from the pedestrian walkway onto the bridge’s roadway during a Black Lives Matter march on July 15.

As the officers took the suspect into custody, an unidentified person in a purple shirt swung a long, thin object twice at the police.

The attack left a lieutenant and a sergeant with cuts to their scalps and Monahan with an injured hand, which is not believed to be broken.

The department shared the video clip on Twitter with the message: ‘Three officers violently attacked by protesters crossing the Brooklyn Bridge. The officers sustained serious injuries. This is not peaceful protest, this will not be tolerated.’

It has been a strange time for the NYPD as Mayor Bill de Blasio announced the department’s budget was being reduced by $1 billion.

De Blasio said the money will be allocated to other agencies including youth programs and social services. 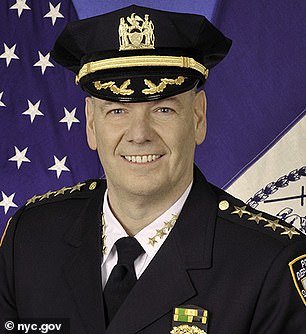 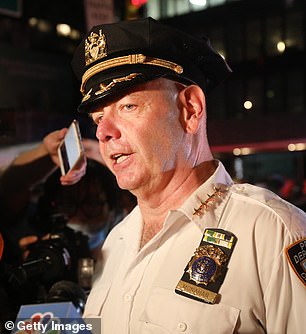 Monahan (left and right) added that NYC district attorneys won’t prosecute officers who break the law, unintentionally or not. It comes one week after Monahan and two officers were attacked on the Brooklyn Bridge by a protestor 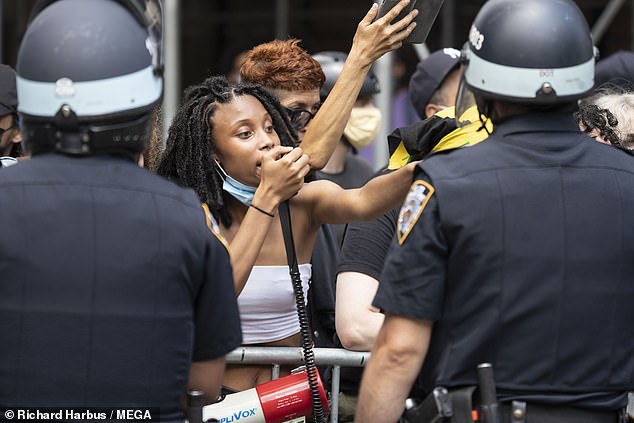 Over the last month, the NYPD has had $1billion stripped from their budget and their Anti-Crime Unit disbanded, even as crime upticks. Pictured: Protesters clashed with police at the Brooklyn Bridge in Manhattan, July 15

The Unit, made up of 600 undercover cops has been targeting illegal guns and local crime sprees, but has also been involved in more complaints and shootings than other units.

Meanwhile, crime continues to tick up in the city, data reveals.

According to statistics released earlier this month, June 2020, saw a 130 percent increase in shooting incidents across the city.

Burglaries rose by 118 percent and the number of auto thefts shot up by 51 percent citywide all while the NYPD had made around 40,000 fewer arrests this year in comparison with last year.