An off-duty NYPD officer careened into a concrete barrier while driving on Saturday morning, leaving the young officer dead and two others seriously wounded.

Garman Chen, 25, of the 76th Precinct in Carroll Gardens was reportedly driving down the northbound lane around 2.30am on FDR Drive.

Video shows the black 2016 Lexus driving down the roadway and passing a car on the left as Chen drives across three lanes.

Suddenly, the Lexus veers too close to a concrete barrier on the left side of the roadway and scraps against the median.

Sparks flay across FDR Drive beneath the pedestrian bridge near the East 23rd Street. 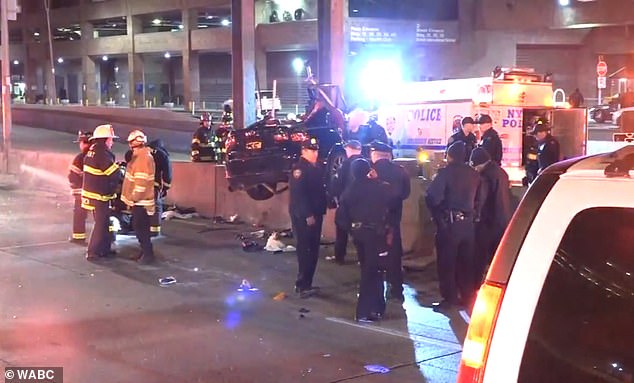 Chen and two passengers were driving down FDR Drive around 2.30am on Saturday when his vehicle careened into a concrete median

The totaled vehicle ended up on top of the median and wrapped around a metal support beam.

Emergency crews found Chen behind the wheel unresponsive and with a massive head injury.

Two other passengers, identified as off-duty NYFD firefighter Kenneth Larken and an Amanda Remy by the New York Daily News, were also left with severe injuries following the crash.

The firefighter, was thrown from the vehicle at the time of the crash and suffers body trauma.

The woman, who was sitting in the back seat, underwent severe injuries to her legs, including severing her right foot. 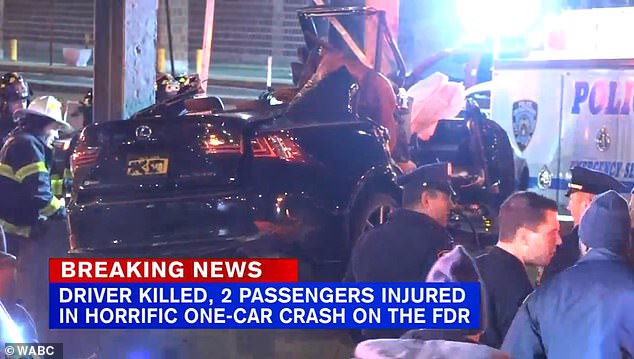 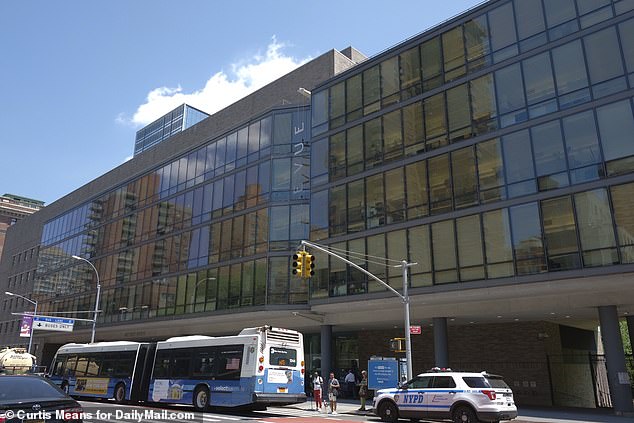 All three victims were taken to Bellevue Hospital Center in Manhattan were Chen was pronounced dead.

The two other passengers are currently at the medical center and are reportedly stable.

The accident caused lanes to close Saturday morning as authorities processed the scene.

Chen was reportedly well known in the Brooklyn neighborhood.

Cynthia Jiminez, 28, who works a half-block from the precinct at Mazzola Bakery, told New York Daily News she was shocked.

She said: ‘I was shocked because he’s so young. His partner was devastated this morning. He was crying.’

As a result of the accident, lanes on FDR Drive were closed on Saturday morning as emergency crews processed the scene

She said: ‘I was shocked because he’s so young. His partner was devastated this morning. He was crying.’

‘He was very friendly, always polite. We just saw him a couple of weeks ago.’

No other vehicles were involved in the car accident.

WABC reports that the NYPD is investigating whether speed or other factors played a role in the accident.