NYT gets trolled for recipe for Brussels sprout sliders

Thanksgiving is all about the classics: Turkey. Mashed Potatoes. Macaroni and cheese. Cranberry sauce.

It is hardly the time to get experimental with new recipes, especially ones that substitute bread for a controversial vegetable.

So when the New York Times tweeted out a recipe suggestion this week, recommending that readers add Brussels sprout sliders to their holiday menus, many of their followers lost their minds — and questioned the publication’s judgement.

Scandal: The New York Times tweeted a link to this recipe for Brussels sprout sliders this week. The recipe has been on the site for several yeas but was suggested for Thanksgiving

Especially if those fingers were dipped in mac and cheese! Twitter users were not impressed

The outcast at the potluck: Many expressed disgust and disapproval

Not cool, guys: Others accused the newspaper of trying to ruin readers’ Thanksgivings

The vegetarian recipe, which actually first appeared on the site several years ago, was submitted to Well blog columnist Tara Parker-Pope by someone named Marla Rose from Berwyn, Illinois.

‘A creative and fun way to enjoy a great fall and winter vegetable: crunchy “buns” of roasted brussels sprouts with a tasty middle — a confit of caramelized onions, tangy mustard and savory tempeh,’ reads the description. Marla Rose described them as ‘dreamy bites of pure umami goodness.’

The recipe calls for Brussels sprouts, cut in half to look like burger buns and marinated and baked in a mix of olive oil, tamari, pressed garlic, cumin, cayenne, and liquid smoke. 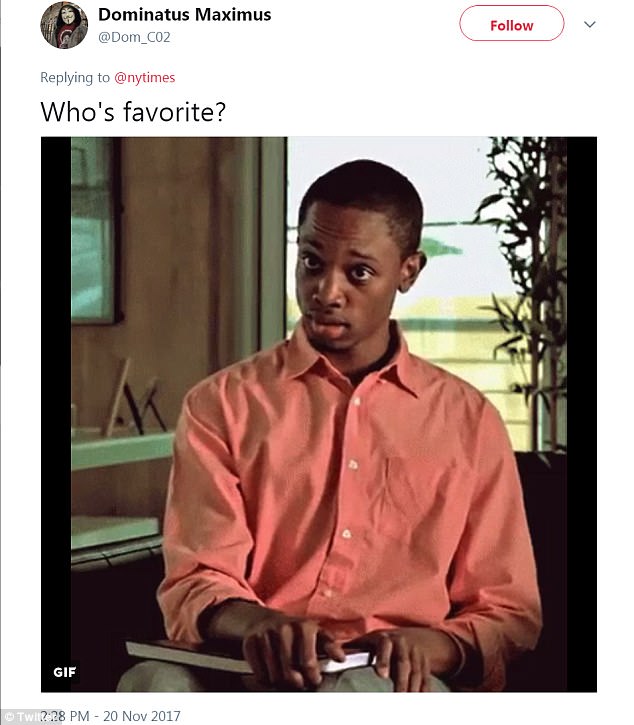 Who, me? Some thought it was funny that the tweet called the recipe ‘your new favorite’ 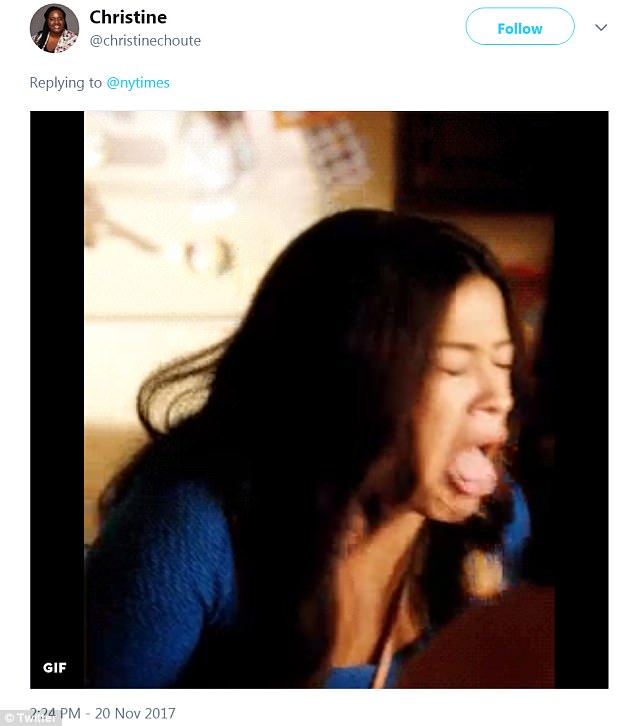 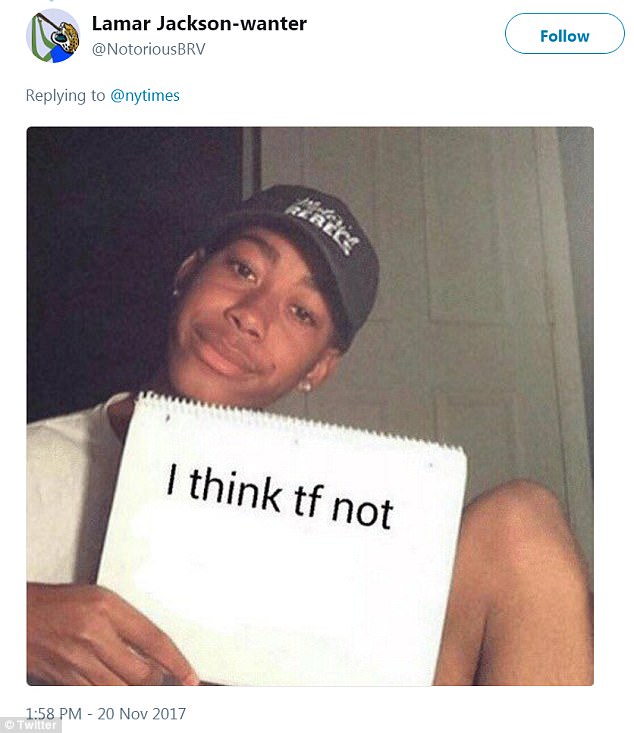 No, just no! The recipe was submitted by a reader and has received a few positive reviews on the website 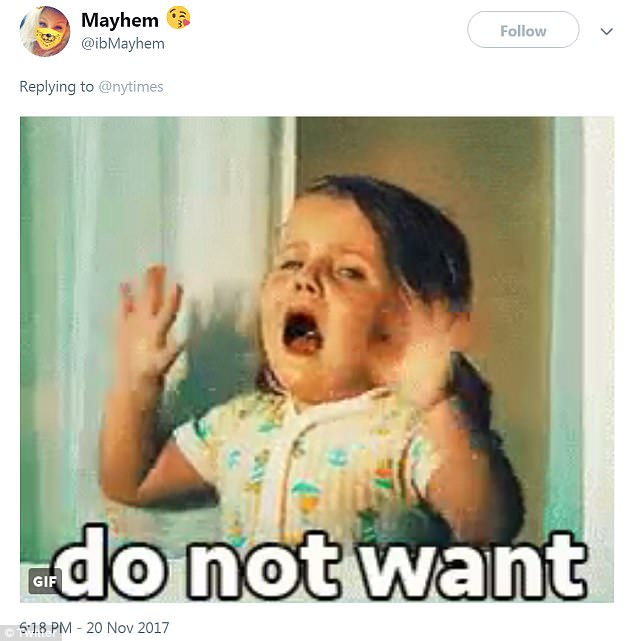 Not popular: However, the vegetarian combo of tempeh, onions, and sprouts is clearly a niche item 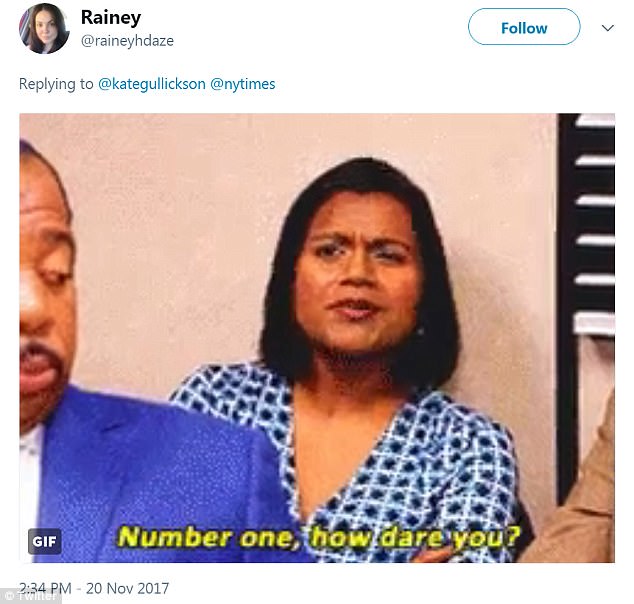 Not at MY Thanksgiving! Hundreds of people were upset at the suggestion

The tempeh is also marinated and baked before it is placed on the Brussels sprout ‘buns’ with caramelized onions and mustard.

It seems, though, that hundreds of the Times’ Twitter followers didn’t need to try making it themselves to pass judgement.

‘I would rather eat my own fingers,’ wrote one quite simply. ‘Perfect way to get uninvited to future gatherings,’ said another.

Quite a few shared gifs expressing disgust, disbelief, confusion, and horror, sharing refusals like ‘hard pass’ and ‘I don’t think you know what “favorite” means.’

‘Why y’all trying to ruin Thanksgiving?’ asked one.

Disappointed: This person joked that the section clearly ‘didn’t know her at all’ after suggesting it would be ‘your’ favorite

Right to the point: Quite a few wasted no words in vetoing the idea 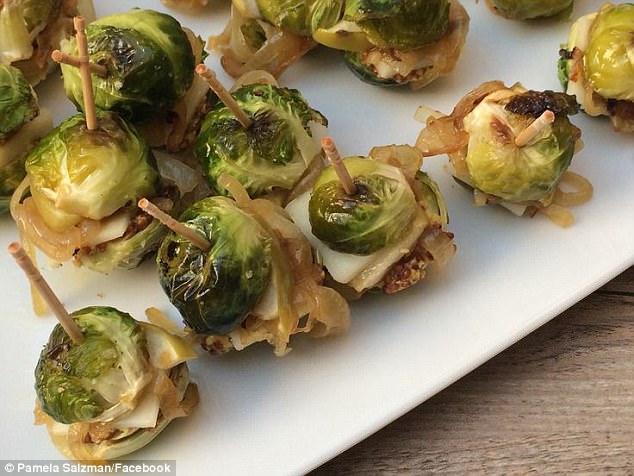 But… Some people have tried the recipe, though, and it appears on a few food blogs, including one by Pamela Salzman

While some people said that they quite like Brussels sprouts, most saw no need for such a dish, especially at the holiday dinner table.

Despite the negative reaction, it’s clear not everyone is anti-sprout slider — in fact, several Times commenters have tried the recipe and written about it in the article comments. One said a group of six she cooked for loved them, and another said they were ‘quite tasty.’

‘I made these on a whim, and they are actually really good, my 3 year old is gobbling them up!’ wrote one. ‘They are officially a family favorite.’

‘These were super delicious, even my veggie and Brussels sprout hating Dad liked them (we didn’t tell him what it was),’ wrote another. 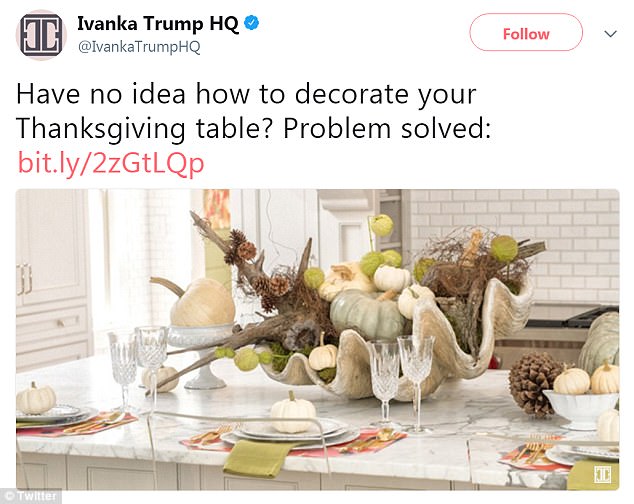 Shell to pay: Last week, Twitter users mocked a suggestion from Ivanka Trump’s brand’s Twitter account that a giant clam shell stuffed with driftwood be used as a centerpiece

A capital idea: This user said that Ivanka Trump had become ‘the garbage god’ thanks to her brand’s fascinating use of bits of dead things found lying on beaches

Spaced out: This person joked that the piece looked like something Martha Stewart would make if she were hallucinating in a dollar store

Sharing a link to an article called ‘An Interior Decorator’s Thanksgiving Tablescape,’ the Ivanka Trump HQ Twitter account made a suggestion for decorating the table for the holiday.

Pictures show a large antique clam shell stuffed with pumpkins, wood, pinecones, and brambles sitting in the middle of a table.

Many found the centerpiece ugly and ridiculous and said so. One wrote: ‘Fill a giant clam with garbage from the woods you are the garbage god now [sic].’

Another joked that this is the result of Martha Stewart shopping in a dollar store while high on the hallucinogenic drug ayahuasca.

People posted their own recreations, one of which included potatoes and cocktail umbrellas in a large bowl. 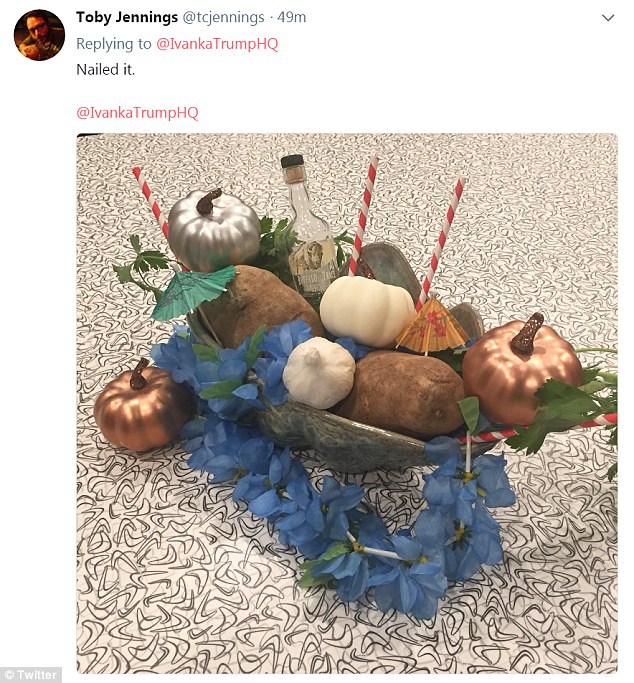 Do it yourself: This user made his own attempt with an empty bourbon bottle, cocktail umbrellas, and dirty potatotes 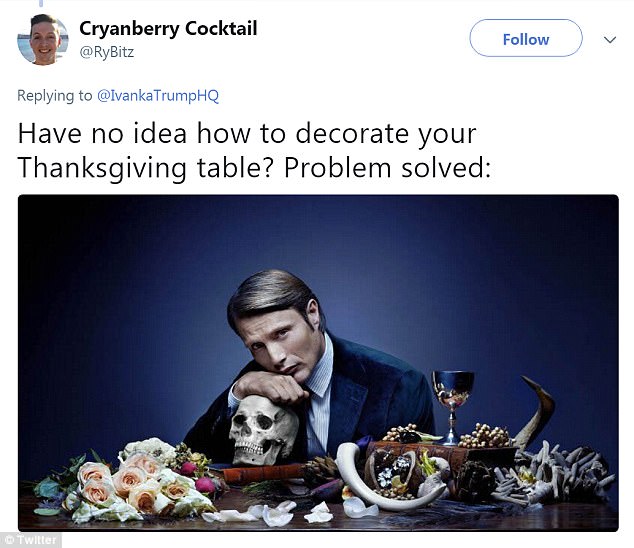 Creep: This user offered up a promo pic from the TV series Hannibal (starring Mads Mikkelsen as the titular cannibal Hannibal Lecter) as a possible inspiration 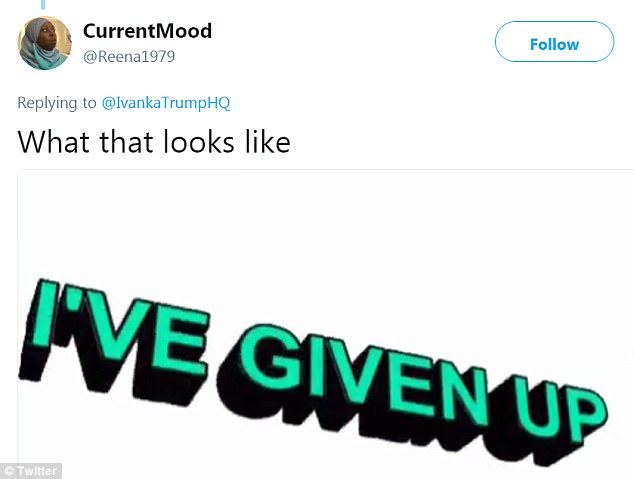 If at first you don’t succeed: Despite the attention and care put into the real clam design, this user felt it betrayed very much the opposite level of investment in a Thanksgiving spread 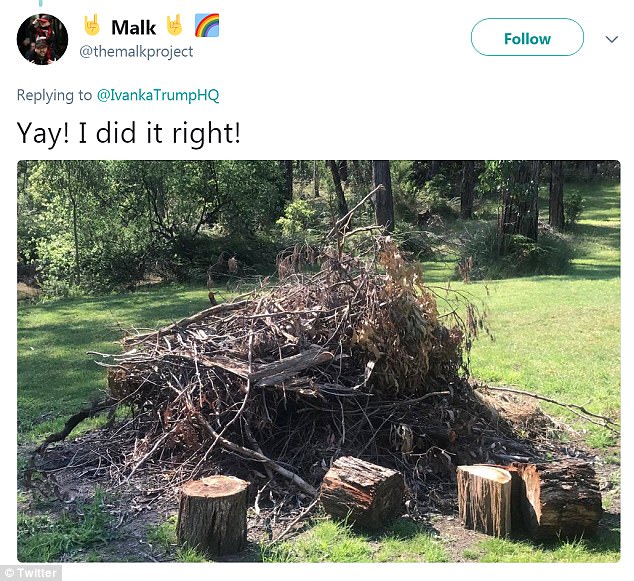 Got wood? The clam-heap was compared unfavorably to this pile of braches 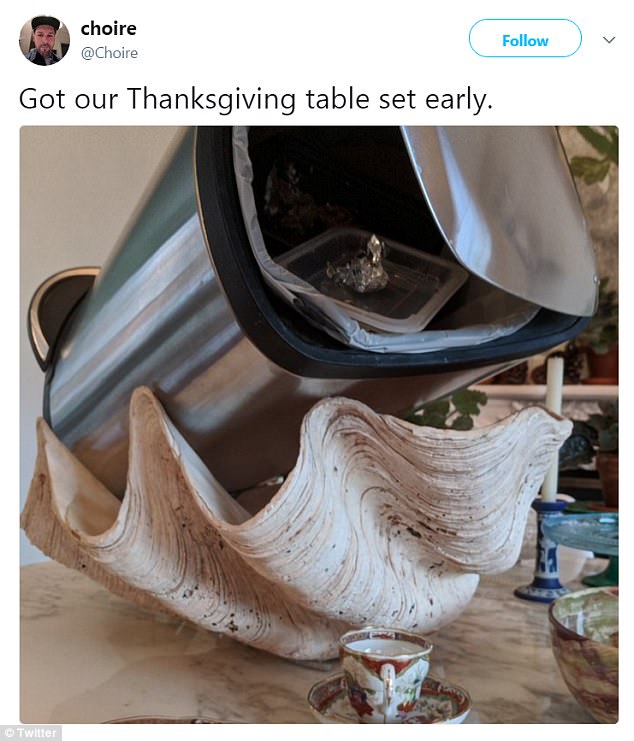 It’s bin done: This user suggested a less chaotic option with an actual garbage can