Obese children ‘have more damaged brains’ than those who are a healthy weight in areas which control appetite, emotions and brainpower, MRI scans reveal

Obese children may suffer irreparable damage to crucial regions of their brains, a study suggests.

MRI scans also revealed damage in regions for cognitive function, suggesting youngsters’ school grades may take a hit if they suffer from obesity.

The researchers believe constant eating causes inflammation in the brain that kills off cells.

And they say the disease triggers an overproduction of the ‘hunger hormone’ leptin, which fuels their weight gain further.

Obese teenagers have visible signs of destruction in areas responsible for controlling appetite, emotion and pleasure, a study suggests (file) 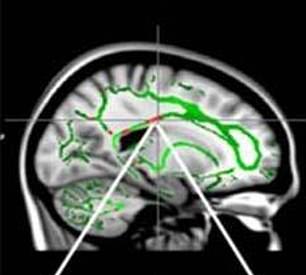 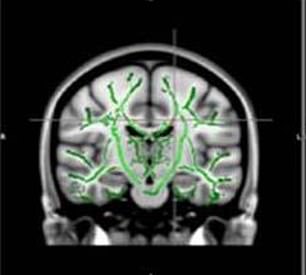 In the US, almost a third of children and teenagers are either overweight or obese, with one in five obese.

The Royal College of Paediatrics and Child Health estimates half of all children will be overweight or obese by 2020.

The latest study, by the Sao Paulo University in Brazil, took brain scans of 120 children aged 12 to 16. Fifty-nine of participants were obese, while 61 were a healthy weight.

English children are fatter than ever – official data revealed last October that one in every 25 10 to 11-year-olds are severely obese, the fattest possible category.

And out of around 556,000 children of primary school-leaving age in the UK, 170,000 are overweight to some degree, figures showed in May last year.

More than one in five 11-year-olds are obese – equivalent to around 111,000 children – and being so fat means they are more likely to develop type 2 diabetes, heart disease, cancer or have a stroke.

The MRI’s showed a decrease in white matter located in the middle orbitofrontal gyrus – a brain region related to emotional control and the reward circuit.

They also revealed brain cells had been destroyed in the corpus callosum, a bundle of nerve fibers that connects the left and right part of the brain and is responsible for cognitive function.

The scientists also found obese children overproduced leptin – a hormone in the brain that controls appetite.

Dr Bertolazzi said: “Our maps showed a positive correlation between brain changes and hormones such as leptin and insulin.

“Furthermore, we found a positive association with inflammatory markers, which leads us to believe in a process of neuro-inflammation besides insulin and leptin resistance.”

She called for more studies to establish if this inflammation in young obese people is a consequence of the structural changes in the brain.

Dr Bertolazzi added: “In the future, we would like to repeat brain MRI in these adolescents after multi-professional treatment for weight loss to assess if the brain changes are reversible or not.’

Last month a study of 2,700 nine to 11 year olds in the US found they were more likely to do worse in problem-solving and memory tests if they were obese or overweight.

They had a thinner cortex – the brain region important for reasoning. Similar structural brain changes are seen in middle-aged people as they get older.

The Cambridge University team said a fatty diet may cause damaging inflammation at a time when a child’s brain is still developing.

But another theory is they had different brains before they became obese, which made fatty and sugary foods more rewarding and reduced their willpower, while also affecting their thinking abilities.

In the UK almost three in 10 two to 15 year olds are overweight or obese.