An intrepid runner lost an incredible ten stone – which has reversed his Type 2 diabetes.

Andrew Clayton, 36, from Wincham, Cheshire, weighed 26 stone when he was given the devastating diagnosis after experiencing symptoms such as tiredness, fatigue and frequent urinating.

However, the 36-year-old decided to make an entire change to his lifestyle and lost a staggering 15 inches from his waist and eight inches from his chest – along with ‘all of the x letters’ from his XXXXL shirts.

On a typical day before his incredible weight loss, Andrew would gorge on takeaways, fry ups and ‘foot-long baguettes’ from a sandwich van at his work.

After losing ten stone he plans to run the London Marathon in April. 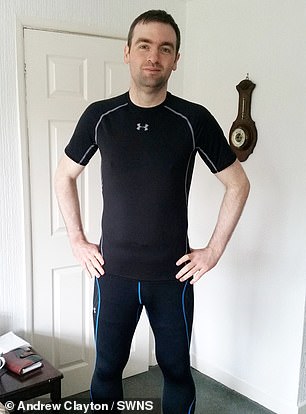 Andrew, pictured before and after his incredible transformation, says he feels like a ‘different person’ after losing so much weight

His remarkable transformation has seen him go from over 26 stone to just 16 stone.

He says that in 2014, he visited the doctors having suffered from symptoms including exhaustion and fatigue:  ‘After a visit to my GP and some blood tests, I was given a diagnosis of Type 2 diabetes.

‘At the time I weighed over 26 stone and I knew I needed to make some lifestyle changes.  I’ve lost over ten stone since then.’

The Bank of America service director was diagnosed with Type 2 diabetes in June 2014, after experiencing typical symptoms. 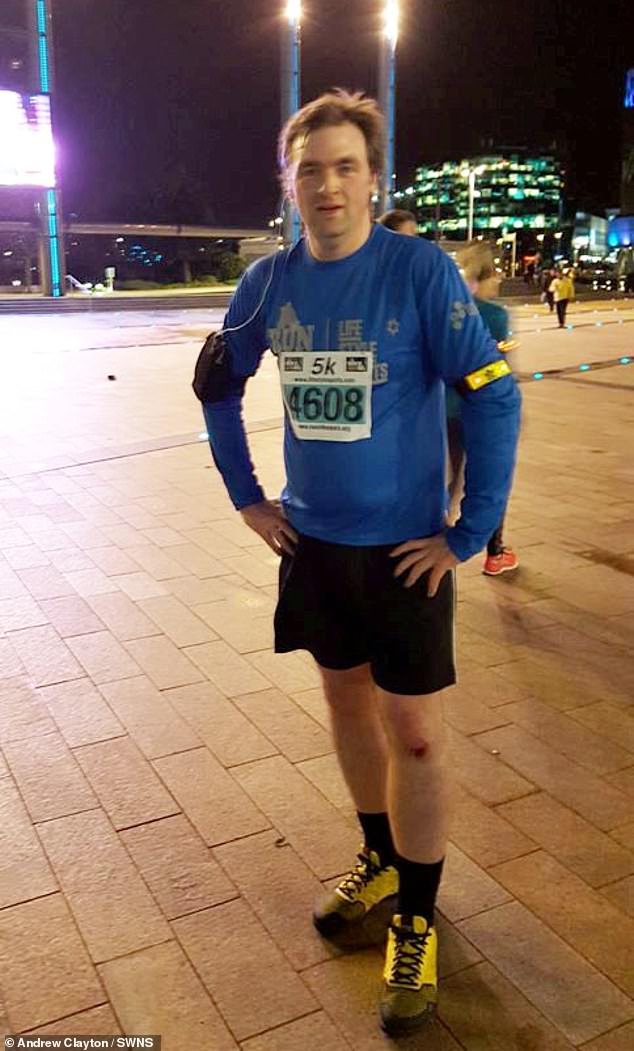 Andrew is now planning to run his first marathon, and will take on the 26 mile race in London in April, all in aid of Diabetes UK

Andrew, who said he was in denial with an ‘it won’t happen to me’ mindset at the time, felt he deserved his diagnosis.

Andrew changed his diet by cutting out fatty and sugary foods and swapping them for healthier options.

On a typical day before his incredible weight loss, Andrew would eat takeaways and fry ups.

However, Andrew made a dramatic change to his diet and now eats wholegrain breads and homemade meals in the evenings. 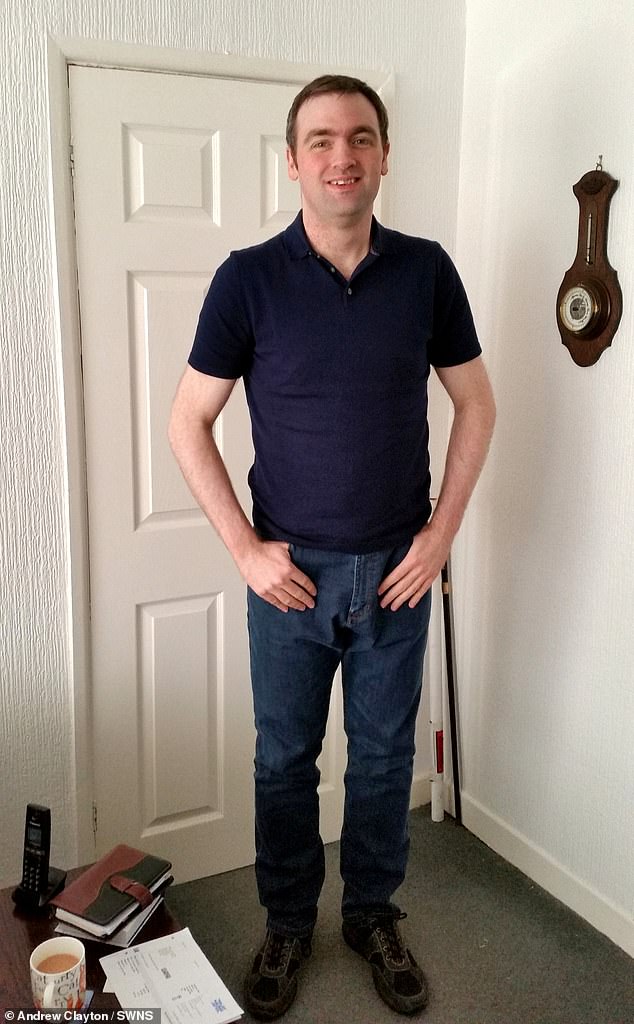 Andrew, who said doctors have been amazed at his progress, has swapped his usual fry ups and takeaways for healthy homemade meals

Andrew said doctors were amazed by his progress. ‘My GP said he could count on one hand the amount of people who have reversed a diabetes diagnosis in the 25 years he has been a doctor.

‘Nobody can believe it, my friends and family have been shocked with the changes.

‘I don’t look like the same person as before and I feel like I have entirely changed my life.

‘I even had to buy an entirely new wardrobe, none of my old clothes fit me.’

The 16-stone man, who became a keen runner during his weight loss journey, is now set to run the London Marathon. 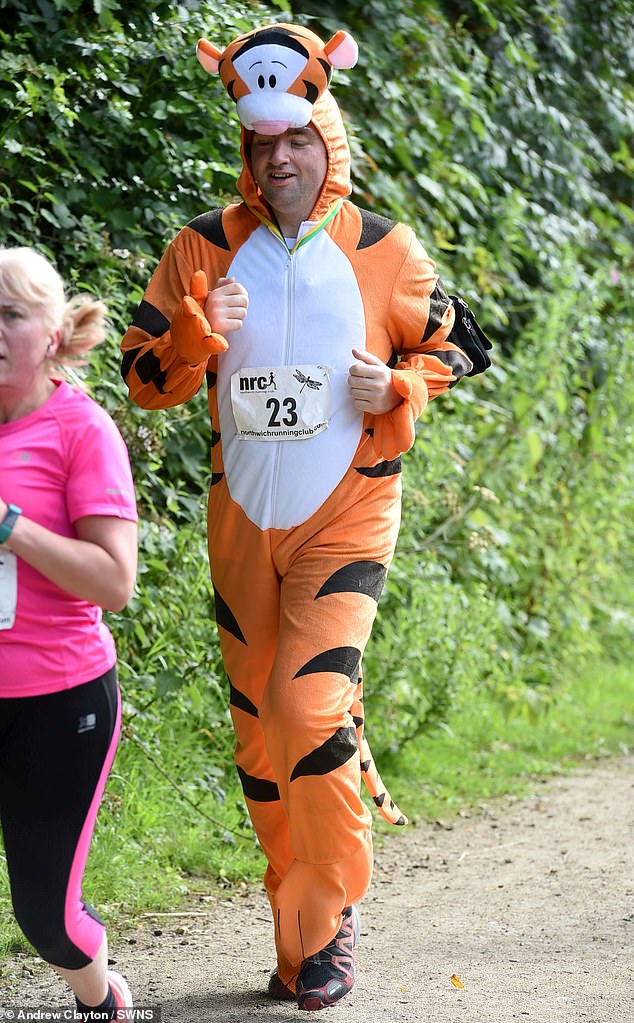 He has become a keen runner while on his weight loss journey, and has taken part in various 5km, 10km races as well as seven half marathons

He has also taken part in 5k and 10k races and seven half-marathons. The 26-mile race around the capital will be Andrew’s first full marathon.

Andrew joked it will probably also be his last: ‘I’m looking forward to the challenge though. Running has made a huge difference to my life and my fitness level.

‘It’s great to be able to now go out for an eight mile run without feeling wiped out.

‘I hope that by supporting Diabetes UK, I can help other people living with the condition.’ 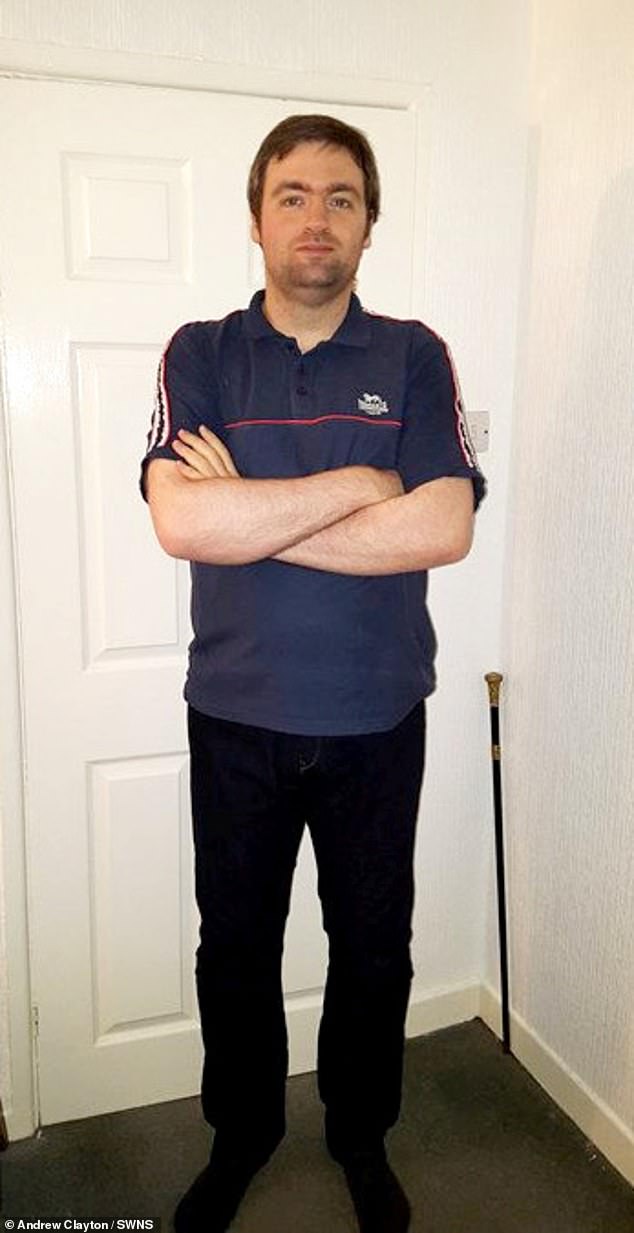 Andrew stunned his friends and family with his incredible weight loss, and said they have been shocked by his progress

A typical day in Andrew’s diet before

A typical day in Andrew’s diet after

Maria Whittaker, Diabetes UK regional fundraiser, said: ‘Our much-needed work wouldn’t be possible without the determination and generosity of our incredible fundraisers.

‘We are extremely grateful to Andrew for his hard work – running a marathon is no mean feat.

‘The money raised will help fund ground-breaking research, care services and campaigns that can change the lives of those living with diabetes.’

Andrew will run the London Marathon on Sunday April 28 to support Diabetes UK.

What is Type 2 diabetes?

Around 90 per cent of the 3.8 million people diagnosed with diabetes have Type 2.

There are almost a million more people living with Type 2 diabetes, who don’t know they have it because they haven’t been diagnosed.

Type 2 diabetes is treated with a healthy diet and increased physical activity. In addition, tablets and/or insulin can be required.