Ocado has emerged as one of the biggest winners of the coronavirus crisis, eclipsing its ‘Big Four’ supermarket rivals.

Iceland also performed well, growing its sales by 29.2 per cent during the period, according to closely watched figures from data company Kantar.

But Ocado’s breakneck expansion provides a glimmer of hope for Marks & Spencer, which yesterday announced plans to lay off around 7,000 staff as part of the biggest jobs cull of its 136-year history.

The ailing High Street stalwart’s tie up with Ocado goes live in less than two weeks. Instead of Waitrose groceries, Ocado vans will be delivering M&S goods to households across Britain.

Bosses and investors – who have seen the M&S share price cut in half this year – are desperately hoping the £750million gamble will turbo-charge its fortunes.

Russ Mould, investment director at AJ Bell, said: ‘A lot is riding on this joint venture being a success.

This is the chance to play catch-up with the online channel and failure to meet expectations could be disastrous for both management and the company’s already fragile share price.’

Figures released by M&S yesterday showed sales in its food halls edged up just 2.5 per cent in the 13 weeks to August 8, compared to an overall increase in the UK grocery market of 14.4 per cent. 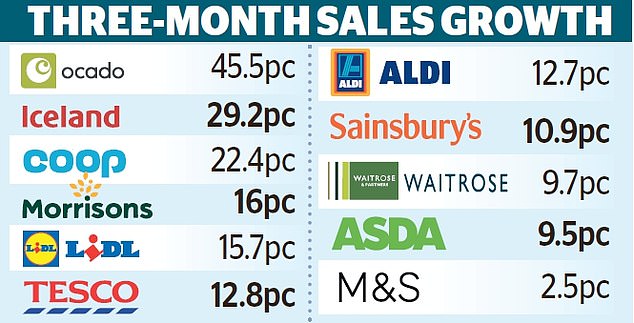 Ocado’s expansion provides a glimmer of hope for M&S, which yesterday announced plans to lay off around 7,000 staff as part of the biggest jobs cull of its 136-year history

The online grocery market has doubled since the start of the pandemic, and now makes up 13.5 per cent of food sales.

M&S has fallen further behind as it has a tiny online food business and relies heavily on commuters and office workers, millions of whom are still working from home.

But the partnership with Ocado will do nothing to help M&S’s clothing and home businesses.

Already struggling before Covid-19 struck, they were hammered during the lockdown, and store sales have plunged by half between March and August.

Outlets in city centres and some shopping centres have performed poorly because of low footfall caused by the closure of offices, and two-fifths of the department stores’ sales are now online.

M&S is closing around 100 stores by 2024 – mostly large shops in town and city centres – and opening 20 clothing and home stores and 75 supermarkets.

These are mostly in retail parks, which have recovered quicker after lockdown, and attract more family shoppers.

This month, M&S announced that it would also shed 950 head office and store management jobs as it accelerated its restructuring plans to create a ‘leaner, faster’ business.

The latest cull will mean roughly one in ten of its 78,000 workers face losing their jobs, with shop floor and managerial staff hardest-hit.

But at the same time 510 roles have been created at its Castle Donington warehouse, and with logistics partner XPO.

Julie Palmer, a restructuring expert at recovery specialist firm Begbies Traynor, said: ‘This M&S announcement will rock the retail sector. This is a huge transformation for the brand and one that is needed.’