OECD expects Reserve Bank of Australia to hike cash rate to 3.6 per cent

The Paris-based OECD is expecting Australian interest rates in 2023 to hit an 11-year high of 3.6 per cent as inflation pressures worsen.

The international finance experts are even more worried about rising interest rates than three of Australia’s Big Four banks.

Australian home borrowers have since May copped five consecutive monthly increases, taking the cash rate in September to a seven-year high of 2.35 per cent.

The end of the record-low 0.1 per cent cash rate has seen the Reserve Bank of Australia deploy the most severe monetary policy tightening since 1994.

But the OECD is predicting more pain and an 11-year high cash rate of 3.6 per cent in Australia next year.

‘Further policy rate increases are needed in most major advanced economies to ensure that forward-looking measures of real interest rates become positive and inflation pressures are reduced durably,’ it said.

The Paris-based OECD is expecting Australian interest rates in 2023 to hit an 11-year high of 3.6 per cent as inflation pressures worsen. The international finance experts are even more worried about rising interest rates than three of Australia’s Big Four banks (pictured is a Melbourne auction)

Should the OECD’s prediction for Australia come true, a borrower with an average $600,000 loan would be owing $1,116 more a month in repayments, compared with early May when the cash rate was still at a record low of 0.1 per cent.

What Australia’s major banks are predicting

ANZ: 3.35 per cent cash rate by December (out from November)

As recently as May, this borrower would have owed $2,306 a month paying off a typical loan with a lower variable rate.

Only one of the Big Four banks agrees with the OECD, with Westpac predicting a 3.6 per cent RBA cash rate by February next year.

ANZ is predicting a 3.35 per cent cash rate by December but on Tuesday hinted it is revising that forecast.

‘In Australia, we are considering whether additional hikes beyond our peak forecast of 3.35 per cent might be required,’ it said.

The Commonwealth Bank, Australia’s biggest home lender, has forecast a 2.6 per cent cash rate in November.

NAB is forecasting a 2.85 per cent cash rate by November.

Australia’s headline inflation rate in the year to June surged by 6.1 per cent – a level well above the RBA’s 2 to 3 per cent target. 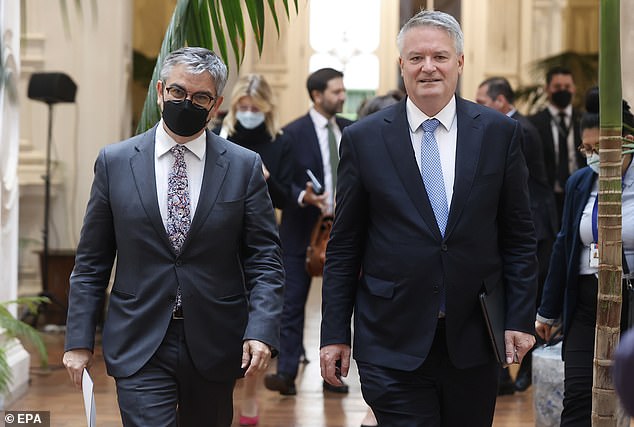 The OECD is predicting more pain and an 11-year high cash rate of 3.6 per cent in Australia next year (pictured right is the OECD’s Secretary General Mathias Cormann, a former Australian finance minister, with Chile’s Finance Minister Mario Marcel this week)

The OECD is slightly less optimistic, predicting a 4.4 per cent inflation rate in 2023.

It is also predicting a recession in the Euro zone and American economies as annual growth slowed to just a quarter of a per cent compared with half a per cent in the U.S.

Australia’s gross domestic product was expected to slow to two per cent in 2023, down from an expected 4.1 per cent for 2022.

‘Even before Russia’s invasion of Ukraine, inflation was above central bank targets in most G20 economies, driven by the initial surge in energy prices as economies reopened after the pandemic, bottlenecks in supply chains, rising freight costs and the shift in the composition of private consumption towards goods,’ it said.

ANZ is now forecasting a recession in the UK in 2023 and ‘shallow recessions’ in the EU and the US as growth slows in China, Australia’s biggest trading partner.

‘Lower growth in China is likely over the next few years, bringing two decades of its economic exceptionalism to a close,’ it said.

What a 3.6 per cent cash rate would mean compared with May

Forecasts comparing a 10-year high cash rate of 3.6 per cent in 2023 with a record-low 0.1 per cent cash rate in May 2022, based on OECD forecasts. Monthly repayments reflect a typical Commonwealth Bank variable loan rising to 5.54 per cent from 2.29 per cent