A mother claims the beard-like mass of painful growths on her face have ruined her marriage and left her jobless.

Iris Hudson, 35, from Cleveland, Ohio, has been tormented by the raised scars, known as keloids, for almost three decades.

Despite undergoing 25 surgeries, the lumps, caused by childhood chickenpox and teenage acne, remain.

As well as causing Ms Hudson severe pain, the disorder has also caused her to battle anxiety and depression.

Trapped within her home, unable to work, Ms Hudson feels she cannot go outdoors due to her frequently enduring cruel stares from strangers, with some even taking photos and videos.

The former marketing director even blames her appearance for her separation from her husband of 17 years.

Ms Hudson is speaking out to raise money towards a last-resort treatment. 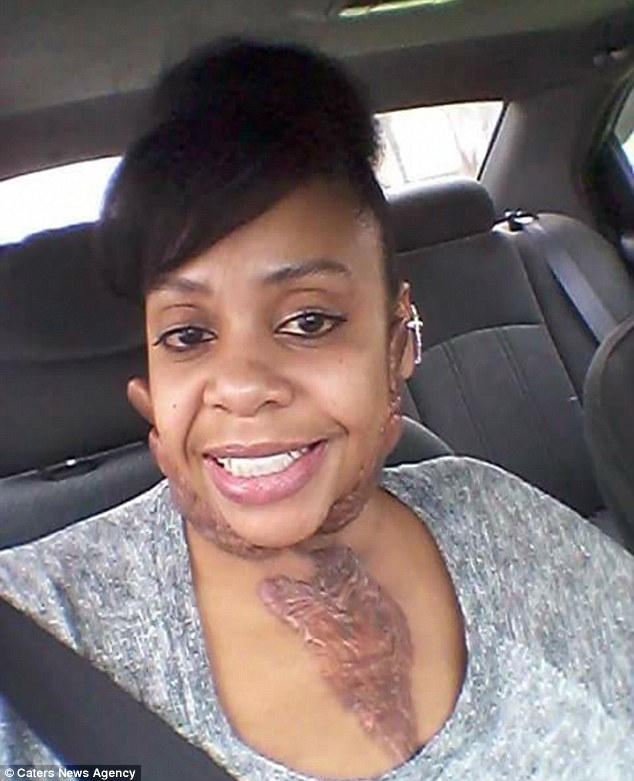 The scars, which she believes are behind her unemployment, have been present for decades 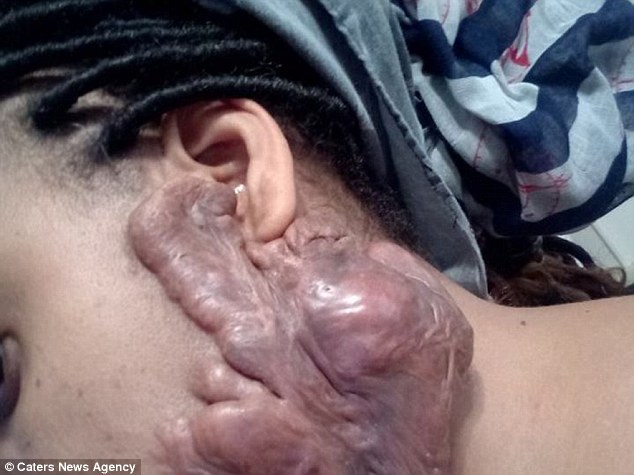 ‘My skin feels like its burning all the time’

Ms Hudson first noticed the growths at eight years old after her chicken pox cleared up.

While in her teenage years, the problem worsened when Ms Hudson developed acne, particularly on her chest.

Speaking of her symptoms, she said: ‘I get constant flare ups and strikes of pain where the keloids are, especially at night and when I’m out in the sun.

‘During the summer months, my skin basically feels like its burning all the time.

‘I get anxiety when I have to go outside and I get so depressed that I have to stay home and can’t work.

‘None of the surgeries worked and some of them even made the problem worse.

‘Anything touching them can cause pain. I even have to be cautious of what clothes I wear.

As well as affecting her quality of life, Ms Hudson’s disorder has also had a significant impact on he relationships. She said: ‘My husband was always accepting of my keloids, but it got to the point where he just didn’t understand what I was going through and it tore us apart.’

She also endures cruel treatment from strangers, adding: ‘People are always staring at me. Sometimes I just keep walking and sometimes I stare back.’ 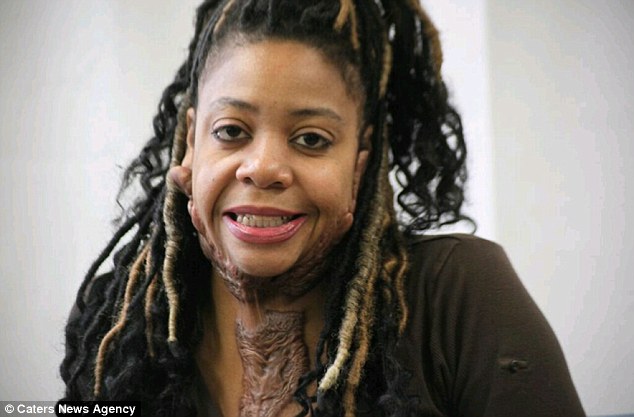 Ms Hudson endures cruel stares from strangers, with some even taking photos and videos 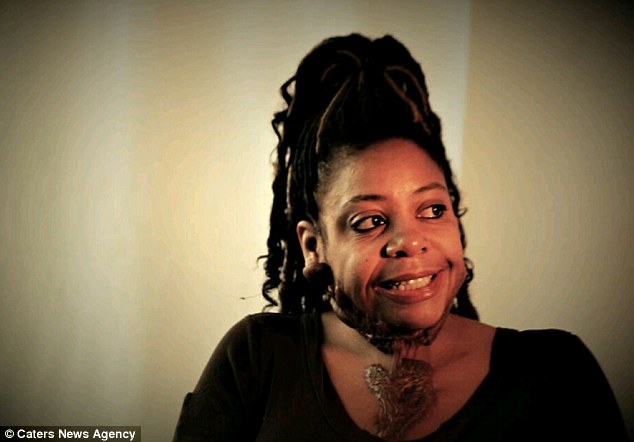 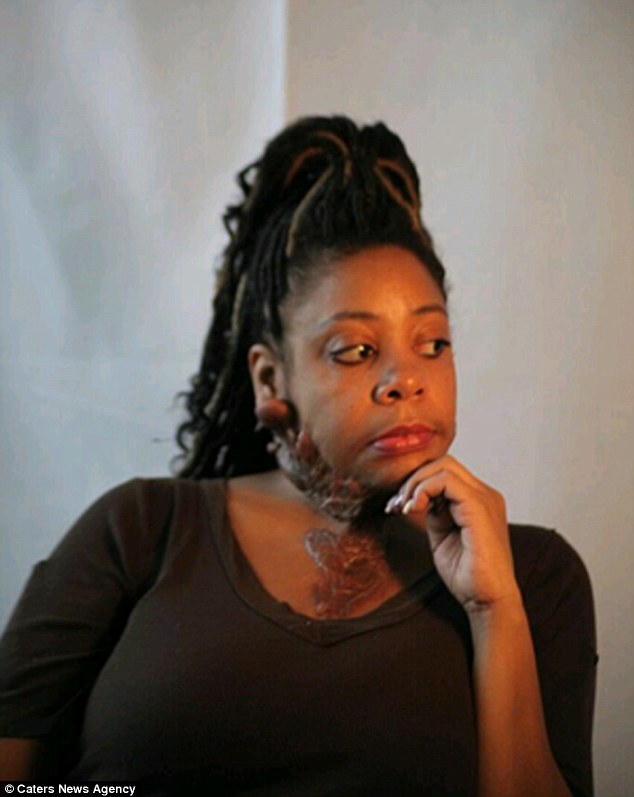 Her anxiety and depression cause Ms Hudson to feel trapped in her home, unable to work

Ms Hudson’s last resort to relieve her suffering is to undergo cryotherapy, which involves freezing the growths and is the only procedure she has not tried.

She hopes this will remove the scars and finally relieve the pain.

Iris said: ‘I’d love to be able to return to work and start living my life again.’

Out of all the setbacks Ms Hudson has been forced to face, the most difficult for her has been to prove to her 18-year-old daughter that she is a good role model, despite not working.

Ms Hudson said: ‘I always made sure I was the best in school when I was younger and at my jobs when I got older. Now she’s followed in my footsteps and is exactly the same.

‘I don’t think she remembers me working when she was younger, so I just want to be able to go back to work for her.’ 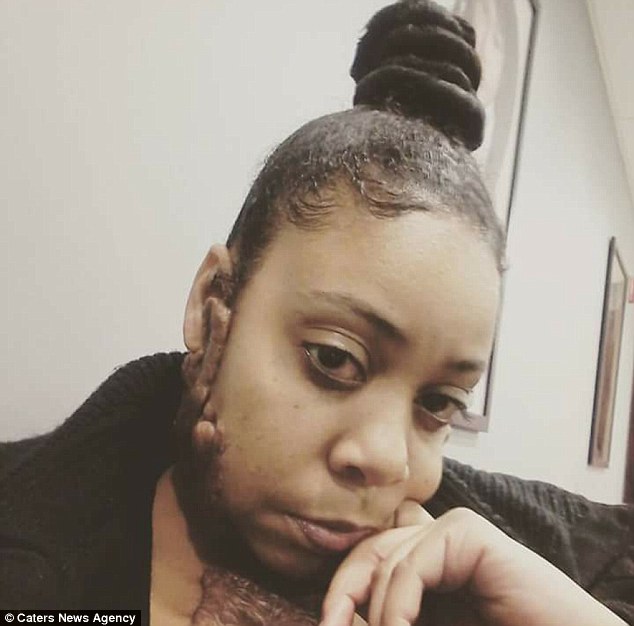 Ms Hudson felt her husband did not understand her disorder, which drove them apart 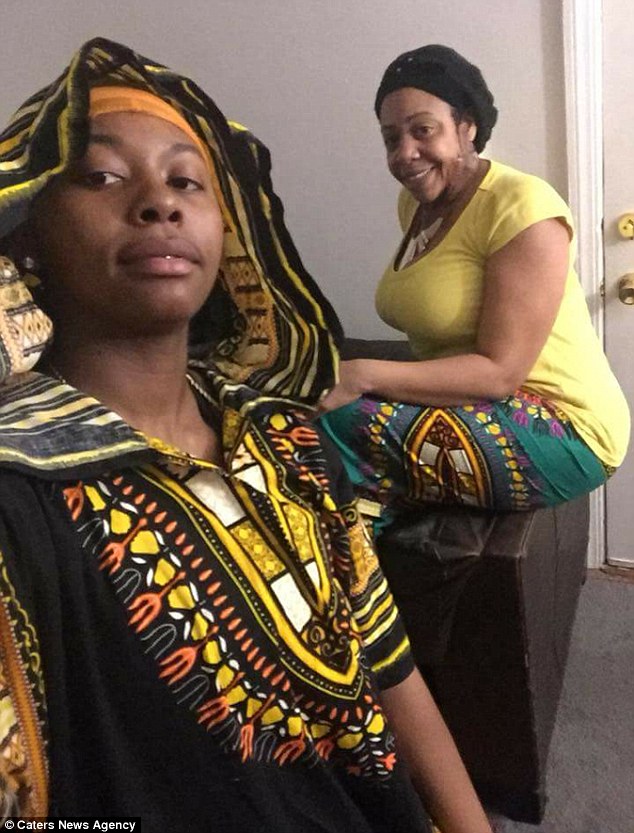 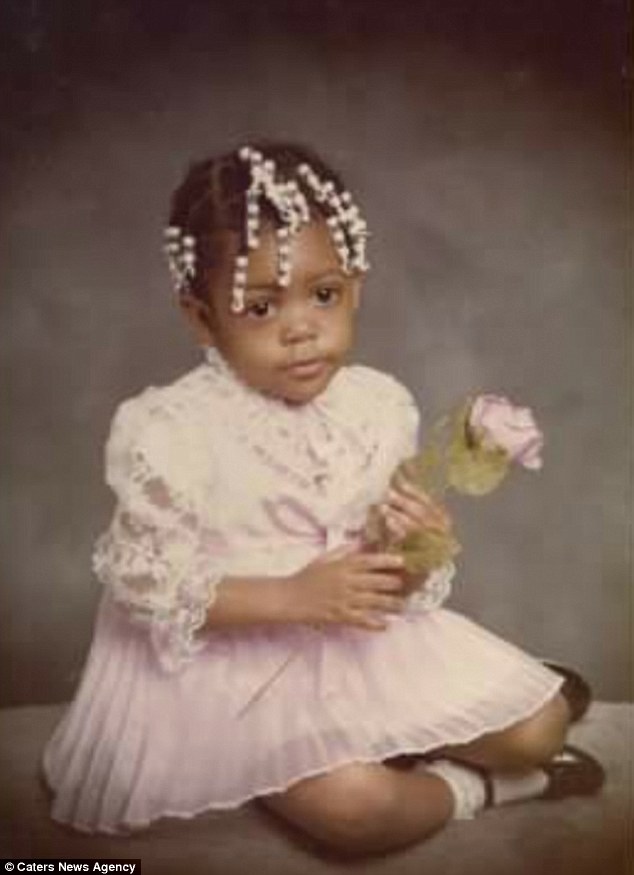 What are keloids? An expert explains

Dr Raffy Karamanoukian, a plastic surgeon who specialises in keloids,said: ‘They are caused by injuries ranging from something as simple as acne to something as extreme as serious trauma.

‘Keloids are overactive scars that grow beyond the footprint of the original injury.

‘They can significantly impact a person’s quality of life.

‘They can present a major cosmetic issue, cause pain, affect sleeping patterns and limit the function of the body depending on where they are located.

‘Treatments start with creams and gels, but if those can’t clear them up, it might be necessary to seek scar modulation procedures, injections, lasering and even surgeries.’