Bahamians are beginning the long process of rebuilding their lives after the ‘tragedy’ of Hurricane Dorian, as an oil spill adds to the country’s woes with 1,300 people still unaccounted for.

Tens of thousands of people on the islands of Abaco and Grand Bahama face a daunting task to clean up the debris, with an estimated $7billion worth of damage and bodies potentially buried under the rubble.

One pastor vowed that ‘I am going to rebuild’ but his church was almost completely destroyed in the Category 5 hurricane.

Residents say the water has turned ‘deadly’ after an oil storage facility on Grand Bahama was ravaged by the storm and they cannot drink or bathe in it.

This afternoon, the Bahamian government said it believed there are 1,300 people missing, a sharp decline from the 2,500 listed on the missing registry a day earlier.

Pastor Jeremiah Saunders poses for a photo among the ruins of his church that was destroyed by Hurricane Dorian, in High Rock on the island Grand Bahama 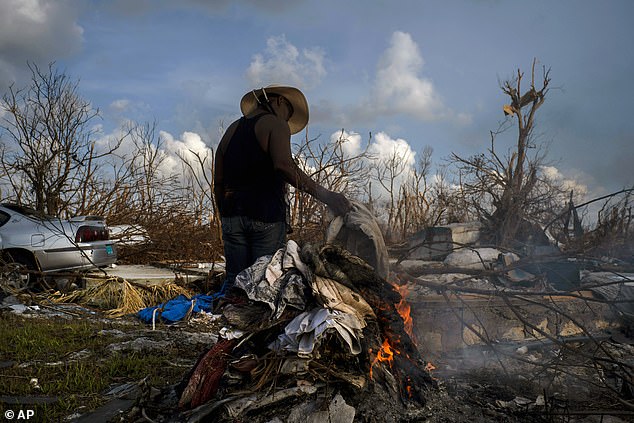 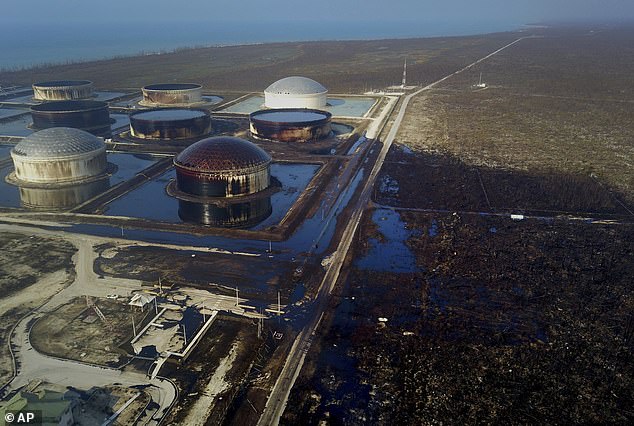 ‘There are no words sufficient to describe this tragedy,’ Bahamian PM Hubert Minnis said. ‘No Bahamian has ever seen anything like this in their lifetime.’

Pastor Jeremiah Saunders was yesterday picking through the remains of the church he built 22 years ago in the seaside village of High Rock.

He escaped the storm alive after it carried him 200 yards until he grabbed hold of a large pine tree and spent two days on a branch after Hurricane Dorian hit the island.

‘I spoke to the water: Peace, be still. It never listened,’ Saunders said yesterday with a wide smile.

‘I am going to rebuild,’ he said in the ruins of his church. The only thing that remained unscathed was a wooden crucifix that he nailed to a wall when he built the church.

As the clean-up continues lights have begun to flicker on in some neighbourhoods, and crews were seen repairing transformers in other areas.

Among those celebrating the return of electricity was rental car company driver Clifton Williams, who was driving home from work when he saw an illuminated streetlight for the first time since the hurricane.

‘I didn’t expect that so quickly,’ he said. ‘First thing I do, I cut on the fan and cool off myself,’ he added, saying he slept well for the first time in more than a week thanks to the fan.

But the small villages that dot the eastern coast of Grand Bahama have barely received any help. 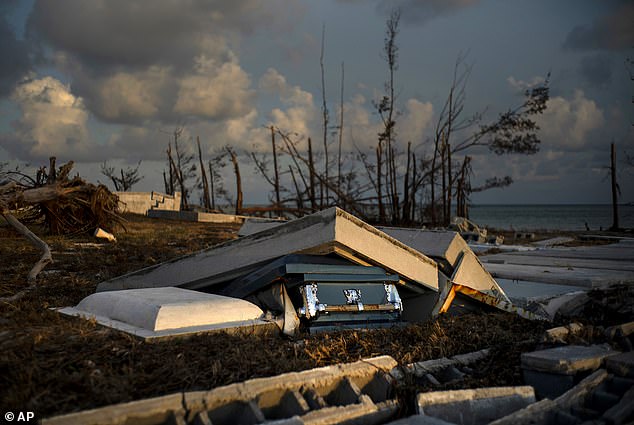 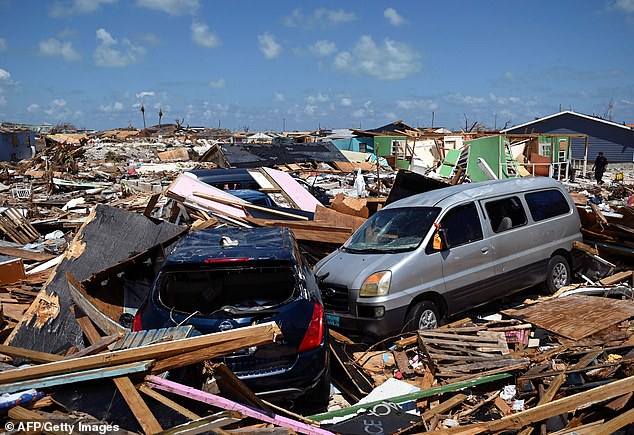 Two badly damaged cars lie on top of a pile of debris in Marsh Harbour in the Bahamas, with 1,300 people still unaccounted for after the Category 5 storm 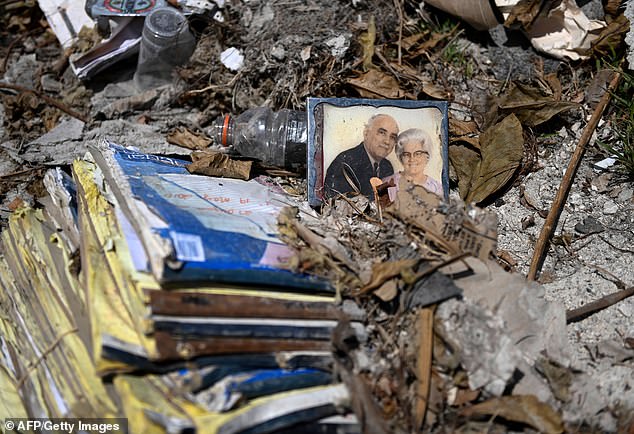 Some residents hitchhike daily from Freeport to their destroyed homes to sort through their belongings and clean up.

Tereha Davis, a 45-year-old fisherwoman, said she was unable to find a ride one day and ended up walking eight miles under the blistering sun.

On Wednesday, she walked through McLean’s Town wearing bright purple surgical gloves, taking a break from cleaning as she looked for something to drink.

She and others said they had not seen any government officials and have only received food and water from some nonprofit groups.

The prime minister acknowledged the situation in a televised address late Wednesday.

‘There have been problems in the coordination of this aid due to the magnitude of this devastation,’ Minnis said.

He added that he understands the deep frustration of those dealing with ‘bureaucratic roadblocks’ and pledged to reduce the red tape and bring in more aid and extra personnel. 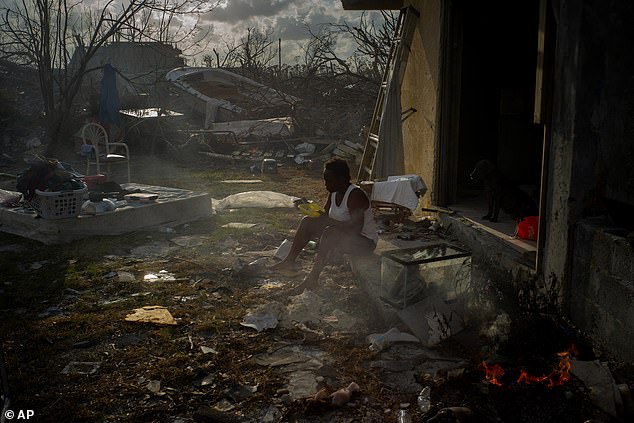 Tereha Davis, 45, eats a meal of rice as she sits among the remains of her shattered home, in the aftermath of Hurricane Dorian 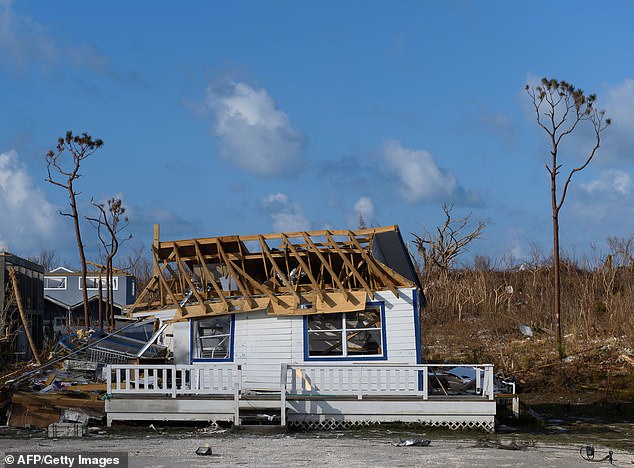 Of these, thousands have been evacuated and about 860 are in emergency shelters in the capital city of Nassau.

As they wait for more help, people across Grand Bahama waded into the cleanup, tossing out mattresses, tearing off roof shingles and clearing branches and power lines as they stood near concrete walls that Dorian knocked down.

Earlier, the National Emergency Management Agency (NEMA) spokesman Carl Smith told reporters that some of the missing people may eventually be located.

‘At this point, there are approximately 2,500 individuals registered on the Bahamian government register (of missing people),’ Smith said.

‘This list has not yet been checked against government records of who is staying in shelters or who have been evacuated,’ he said.

‘Some individuals who have been evacuated from Abaco and Grand Bahama have not yet registered with social services. 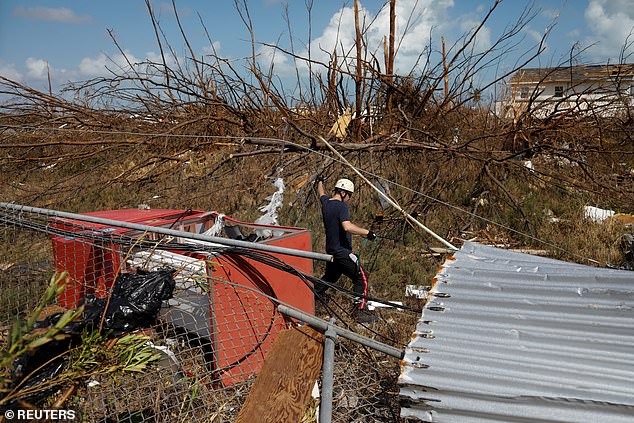 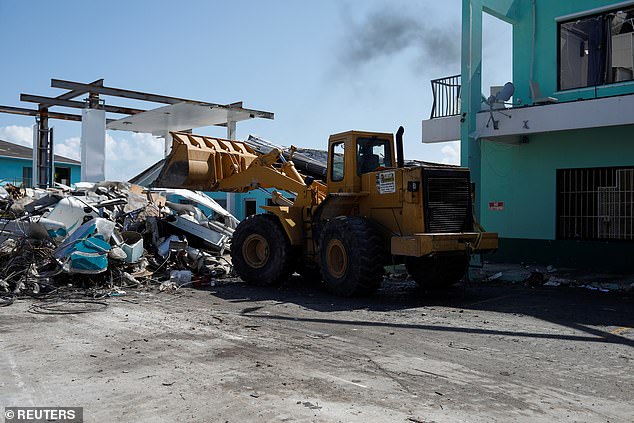 ‘As we are able to cross-reference our data sets, we will be able to inform family members and reunite survivors with loved ones.’

At least 50 people died in the hurricane, which slammed into the northern Bahamas as a Category 5 storm, and officials have said they expect the number to rise significantly.

‘We’re not going to speculate on what the final numbers will be,’ Smith said. ‘We understand that people are concerned and so are we.’

Making matters worse, the hurricane has also caused an oil spill at the Norwegian Equinor facility on Grand Bahama.

‘Before the hurricane hit, nine of our 10 tanks at the terminal had aluminium domed roofs,’ said Equinor spokesman Erik Haaland. ‘Five of these roofs are now gone.’

Residents of High Rock now fear that the air that they breathe and the water that they drink is not safe. 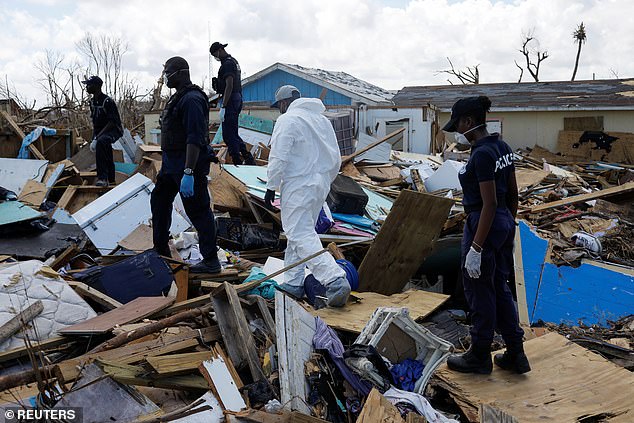 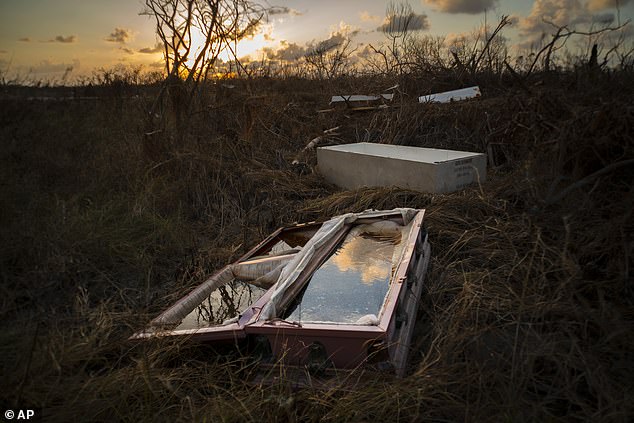 A shattered and water-filled coffin lies exposed to the elements in the aftermath of Hurricane Dorian, at the cemetery in McLean’s Town

The oil is ‘deadly, deadly,’ said Marco Roberts, 38, holding a mask and lamenting the poisoned state of his island.

At ground zero, several huge oil storage tanks are colored black by overflown oil, which has spread over a stretch of land near the coast.

It remains unknown if oil from the Equinor facility reached the ocean.

The spill occurred at Equinor’s South Riding Point terminal, which has a storage capacity of 6.75 million barrels of crude and condensate.

According to Equinor, the tanks were storing 1.8 million barrels when the hurricane hit.

Dorian caused catastrophic damage by stalling for three days over the northern edge of the archipelago, moving at just 1mph at one stage.

It then went on to lash part of the U.S. coast, although not with such force.