A teenager is taking her high school to task after being punished for wearing a pair of baggy shorts and a long T-shirt on pajama day, despite the fact that the outfit met the school’s dress code regulations.

On Monday, Duncan Cobb, 17, from Midwest City, Oklahoma, who is the daughter of the district superintendent, wore a typical bedtime ensemble – a men’s XXXL T-shirt and pajama shorts – for Carl Albert High School’s pajama day.

But despite the fact that both her shorts and shirt fell to fingertip-length, as the school’s dress code requires, Duncan was ‘singled out’ by her principal who accused her of having her ‘butt hanging out’ and told her she had to either pull down her shorts or change clothes. 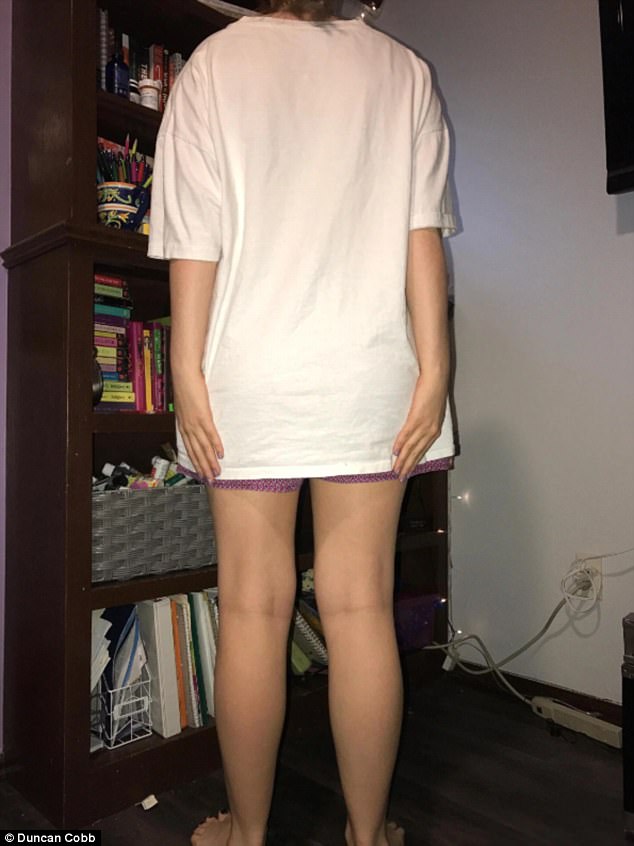 Following the rules: Although Duncan’s pajama shorts were fingertip-length, as the school’s dress code requires, she was told she had to either pull them down or change clothes 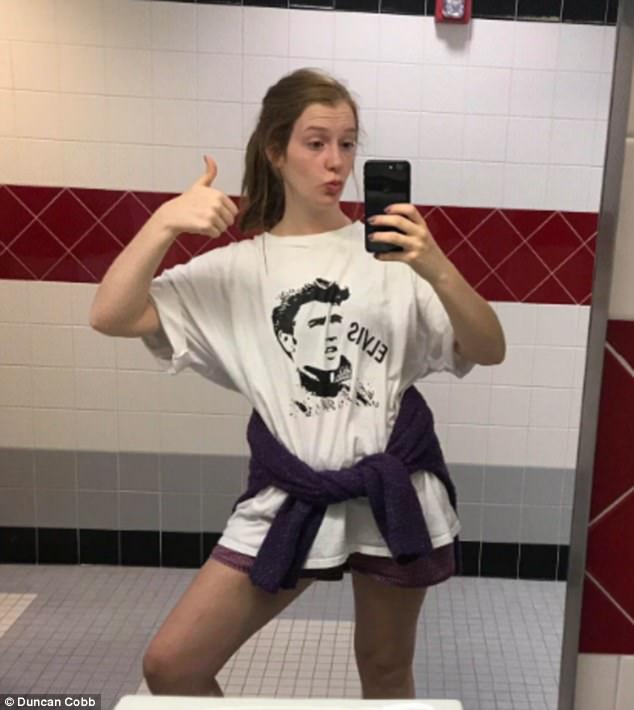 Unfair treatment: The teen was also told that because her father is the school district’s superintendent, she was ‘under a microscope’ 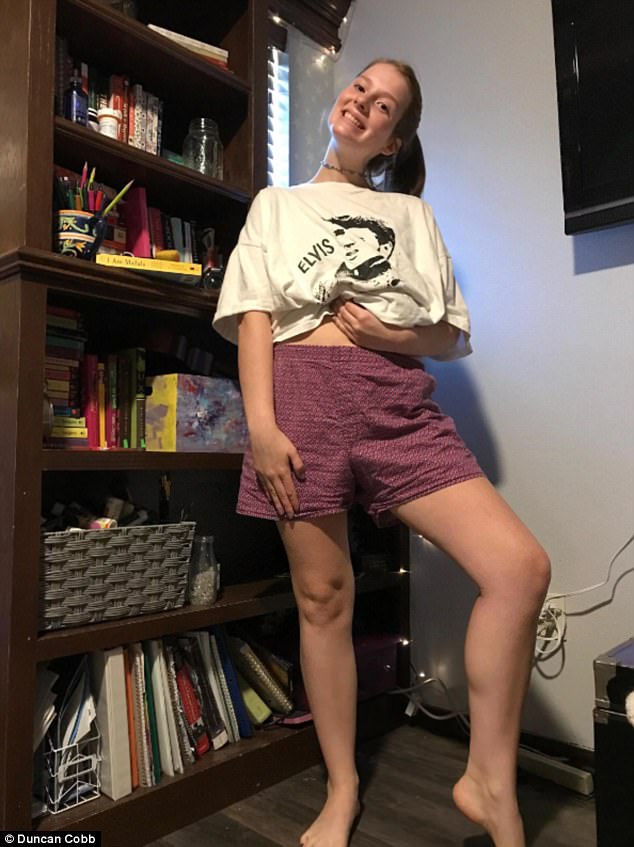 Trying to make a change: After the experience, Duncan created an online petition asking the school to change its dress code to one that doesn’t focus on how much skin students show

Duncan, who had just started attending the school eight days ago, was also told that she was ‘under a microscope’ because her father is the school district’s superintendent.

The high school senior shared images of her outfit with her arms by her side to prove that she followed the dress code rules.

‘What I was wearing wasn’t hurting anyone,’ Duncan told DailyMail.com. ‘I’m not just speaking up just for myself.

‘There are girls at the middle school and in elementary schools who go to school thinking they aren’t breaking any rules and then they’re singled out and made out to feel like they’ve done something wrong.’

After the experience, the teen created an online petition asking the school to change its dress code to one that doesn’t focus on how much skin students show, saying she wanted to provoke a change in the name of all girls who aren’t free to dress how they want to because they are over-sexualized even before they hit puberty.

The petition reads: ‘A school dress code policy that operates upon the belief that the amount of skin a student is showing interferes with their own ability and their peers’ ability to learn is not only harmful to female students, but also to the male students who are often accused of not being able to focus when a female’s shoulder is showing in class.’ 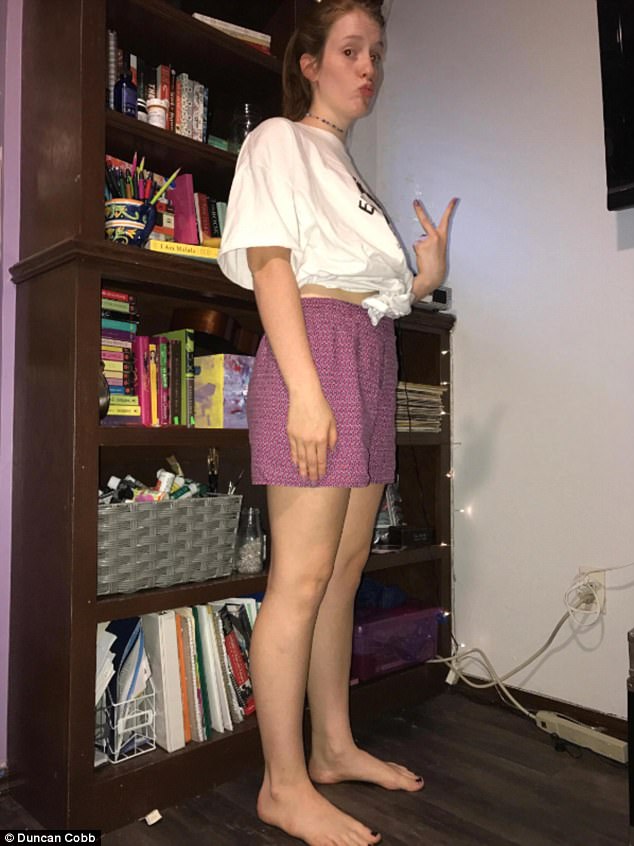 Not everyone agrees: Duncan said that some people at her school believe that, because she’s new at the school, she shouldn’t try to change things yet 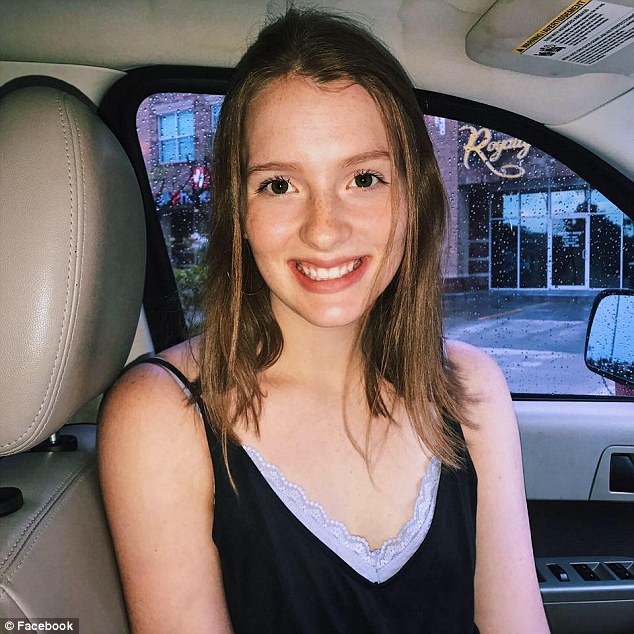 Shining a light: ‘If I don’t succeed in bringing about change, I have at least started the conversation for the next brave girl who stands up for herself after me,’ said Duncan

While she’s received a lot of support, and her petition now has more than 1,000 signatures, some of her classmates feel that because Duncan has only been at the school for little over a week, she has no right to try to shake things up so soon.

‘One girl wants me kicked out of the Leadership Program — she thinks I’m not a good enough leader because I’m not following the rules,’ Duncan said to Babe.

Still, many believe in Duncan’s cause. One of her friends told babe that what she’s doing is brave, since ‘everyone hates the dress code but no one ever speaks up.’

‘When I go shopping I have to make sure my jeans aren’t too tight, or the holes are below the knee. It’s hard to find clothes that make me feel good about myself, it makes getting dressed in the morning really discouraging,’ Duncan’s friend told babe.

Although Duncan’s petition has gathered 1,350 signatures, the school’s principal reportedly told the teen that the policy cannot be changed for this year but the dress code ‘might be reconsidered next year’.

‘I’m not breaking rules, I’m using my voice to change them,’ Duncan said. ‘And if I don’t succeed in bringing about change, I have at least started the conversation for the next brave girl who stands up for herself after me.’