There is, admittedly, something rather dull and predictable about the traditional family portrait, with everyone lined up stiffly, wearing forced smiles. Why not, perhaps the Campbell family thought, do something a little bit different?

And in that, as you can see, they have undoubtedly succeeded. The photograph in question features Old Etonian Roddy Campbell, his two model daughters, Edie and Olympia, and a young gentleman, believed to be their brother, Arthur.

Edie, 26, is naked apart from red bikini bottoms, thigh-length red leather boots, the word FILTH sprayed across her chest and a fur stole wrapped around her back.

Her 21-year-old sister, Olympia, is wearing a bikini over which is some sort of holey tube concoction. Edie has her hand on the bare posterior of a young man wearing a thong and black chaps, thought to be 28-year-old Arthur.

Arthur, if this is indeed him, is bending down with his bottom in the air, poking his face out of the gap between his legs, a drink in one hand.

Next to them, standing proudly, is their father, 57-year-old Roddy, dressed in a gold smoking jacket and sailor’s cap — a tribute, apparently, to Playboy magazine magnate, Hugh Hefner.

The photograph in question features Old Etonian Roddy Campbell (left), his two model daughters, Edie (second right) and Olympia, and a young gentleman, believed to be their brother, Arthur

Two versions of this happy family pose were later posted on the Instagram pages of Edie and Olympia — captioned by Edie, A Family Portrait.

It could, of course, have another caption: ‘The most louche family in Britain’. In what is, nowadays, a highly competitive field, they must surely be contenders for such a title.

The photograph was taken at a party hosted by Edie and Olympia last month for some 200 friends and family in a marquee on land next to Fawsley Hall Hotel in Northamptonshire. The theme, if anyone needed telling, was ‘Absolute Filth’.

Roddy, 57, later threw off his jacket to reveal a bunny-girl outfit: leotard, fishnets and bow tie.

The guests — all very posh, of course, for don’t the upper classes love this sort of thing — dutifully adhered to the dress code. One man wearing a black dog mask appears to have spent the evening being yanked around on a lead. One woman wore a nun’s habit and placard saying: ‘Confess your filth’.

Edie and Olympia’s 56-year-old mother, Sophie Hicks, who is divorced from Roddy, wore a trouser suit and white shirt — giving the impression to some observers that she had come dressed as a man.

As it happens, Sophie, a former fashion editor at Vogue and Tatler, has always dressed like that. Sophie’s habit of dressing ‘in drag’ is one just of many idiosyncracies of the Campbell family.

But what is so very odd about an already deeply peculiar scenario is that Mum and Dad weren’t in attendance to ensure things didn’t get totally out of hand, but simply to enjoy themselves.

While most fathers would be beyond horrified, Roddy’s expression tells us what a good joke he thought it all was. Mum’s in on it, too. Strapped to her trousers is a curly sort of wig which needs no explanation. Ms Hicks later referred to her daughters on social media as ‘my two tartlets’.

The party was, by all accounts, a success. ‘Thank you to everyone who went absolutely f****** wild,’ Edie wrote later on Instagram.

But to one young woman at least who attended, who has spoken to the Mail, it was all a bit too much. ‘It was like finding yourself in Sodom and Gomorrah,’ she says. 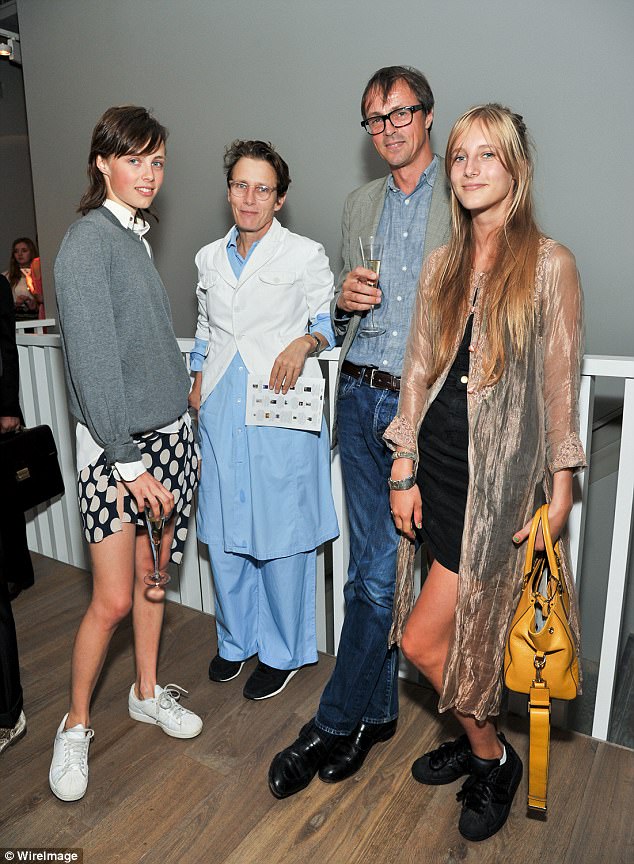 ‘People were getting under tables coupling off together or going to the hotel. Men were getting their “bits” out and lots of women were walking around topless.

‘I didn’t recognise a lot of the people there. There were quite a lot of strange, seedy-looking types whom I’ve never met. It was all so blatant and awful. I couldn’t take it and left before midnight.’

But those who know the Campbells say it was to be expected: Roddy, the patriarch, has been practising the art of loucheness for most of his life. The party, they say, was nothing unusual.

At Oxford University, Roddy was a member of the secretive Piers Gaveston Society, the drinking and dining club whose members are said to partake in rather childishly outrageous behaviour.

Roddy was a contemporary of the actor Hugh Grant. There is a well-known picture, periodically produced, of Grant at a Piers Gaveston party wearing a loincloth. In the picture with him is Roddy, sitting down, with his head rather close to Hughie’s groin.

Roderick Hugo Campbell’s entry in The Peerage (a website index of peerages in UK) tells us he is the son of the Hon Neil Donald Campbell and Angela Louise Vereker Cross. His former wife, Sophie Hicks, an enfant terrible of her day, is now a highly regarded architect. Her mother, Joan Hicks, was a successful model in her younger days.

Model sisters Edie and Olympia Campbell threw a joint birthday bash for more than 200 friends and relatives at Fawsley Hall Hotel in Northamptonshire, with father Roddy Campbell proving he can still get down with the kids

The family settled in a mews house in London’s bohemian Notting Hill, which suited them perfectly. Roddy was a hedge-fund manager pulling in millions, while Sophie was doing very well as an architect designing spaces for fashion stores such as Chloe and Paul Smith, and creating beautiful homes for pop stars such as Simon Le Bon and his wife Yasmin.

The sisters have spoken about their ‘liberal’ upbringing. ‘I wasn’t a rebellious child — my parents were very liberal so there was nothing to rebel against,’ Edie has said. ‘I went to St Paul’s Girls’ School, where there were no rules either. I dyed my hair blue and didn’t wear a uniform.’ It doesn’t appear that she spent her teenage years studying, either. ‘As soon as I looked vaguely old enough, I bought my fake ID online and went clubbing in Soho,’ she has said.

A friend of the family says Roddy and Sophie’s parenting style was ‘very modern. They saw the children as young adults, not children. They took the attitude that they’d learn from their mistakes.

‘So, for example, if they found out they were drinking, or smoking, they wouldn’t tell them off but would see it as part of an experience they’d learn from.’

Edie and Olympia, in various interviews, have referred to a ‘step sibling’ of theirs, Lucas, but his precise relation to the family has always remained slightly vague. In fact he is Roddy’s son, born during his marriage to Sophie as a result of an affair with Mary Glanville, a business consultant.

Lucas, 16, was born in November 2000 at London’s Chelsea and Westminster Hospital when Ms Glanville was 39. Roddy is named as father on the birth certificate.

Whether Roddy’s wife knew about the relationship — and the baby — at the time is not clear, but the pair divorced several years later when Arthur, Edie and Olympia were in their teens. Edie refers to Lucas as ‘the appendage’.

She was 14 when her parents separated. Speaking once about the effect it had on her, she said: ‘I’m sure it [the split] had something to do with my grumpiness. But it was very amiable, as splits go.’ A year later, she started modelling. She’d first appeared in Vogue, aged five, when she was photographed for an article about her mother’s architectural practice.

After a hiatus of ten years, the photographer Mario Testino booked her for a Burberry group shot and got her to stand in front of Kate Moss.

Edie instantly became one of Britain’s most sought-after models, appearing on the cover of Vogue and fronting high-profile campaigns for labels such as Stella McCartney and Marc Jacobs, as well as Burberry. In an interview in 2010, aged 19, she revealed an unusual degree of self-possession. Asked whether she preferred East or West London, she shrugged her shoulders and replied: ‘There are a***holes everywhere, aren’t there?’

At this time there was a rock star boyfriend in tow, Johnny Borrell, singer with the band Razorlight. By 2012 she was going out with Otis Ferry, son of singer Bryan Ferry. Until this time, Edie’s ‘signature’ had been her waist-length blonde hair, so friends were somewhat stunned when she had the whole lot cut off into a wispy bob and put the hair in a box.

In 2014, eyebrows were raised when she walked down a catwalk naked but for a jewelled thong and bodypaint for a Marc Jacob’s show for Louis Vuitton.

‘I’d had quite a few mojitos by that point so I was just agreeing to anything,’ she explained later.

But there is another side to Edie. She was awarded a First in her history of art degree when she graduated from the Courtauld Institute of Art in 2013, and when she’s not stripping practically naked for wild parties she can be found on one-day event courses around the country, where she competes on her two horses, Dolly and Armani.

Olympia seems to be the sensible one (by Campbell standards, at least). She is also now a much sought-after model, which she combines with studying for a degree in human sciences at University College London.

Her only concession to the family attention-seeking trait is the tagline on her Instagram page: ‘Vagina Vagina Vagina.’

But even this is apparently some sort of political statement by Olympia, who believes there is too much embarrassment surrounding the word — and embarrassment appears to be an alien concept to the Campbells.

Arthur, apparently the man photographed with his bottom in the air, is a teacher and believed to live in Clapton, East London. What his students make of that picture is anyone’s guess. 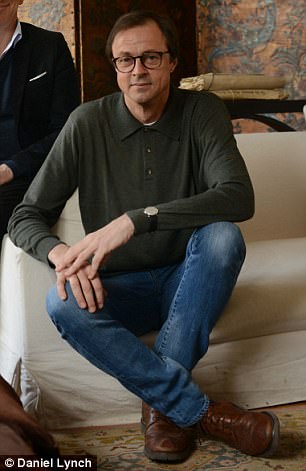 Last year, Roddy married Turkish-born consultant Elif Kutsal, who is much younger than him

While his children pursued their various careers, Roddy got out of the hedge-fund game, reportedly making more than £6 million from selling his company. Two years ago he launched a new company, Vrumi, which assists in providing rented office workspaces in homes for periods during the day while their owners are out.

Last year, Roddy married Turkish-born consultant Elif Kutsal, who is much younger than him.

Meanwhile, Edie split from Otis last year and seems to be becoming wilder. In June, she wrote on Instagram: ‘Doing my best impression of normal after the most craiced out (sic) Irish wedding. I would be a lucky gal if anyone ever loved me the way you love each other. Though given how I continue to behave, this seems increasingly unlikely.’

Given what went on, it’s hardly surprising that Fawsley Hall Hotel seems to want to try to distance itself. A spokesman pointed out that while guests may have stayed there — and one risque picture shows Edie and Olympia on a bed in a hotel room — the party itself took place on adjacent land only partly owned by the hotel.

And while some party-goers may have been shocked by just how Absolutely Filthy it was, Roddy, Arthur, Olympia and Edie are unlikely to be among them.

Indeed, it would hardly be a surprise if that louche ‘family portrait’ was now in pride of place on the mantelpiece.