The oldest elephant in captivity, who was nicknamed Granny, has died aged 88 at an Indian temple.

‘Gaja Muthassi’ [elephant granny] Dakshayani had taken part in temple rituals and processions in the southern Indian state of Kerala for decades but passed away on Tuesday after becoming reluctant to eat.

Her veterinarian surgeon, T. Rajeev, said: ‘At 3pm, a sudden shiver passed through her large frame beginning from the head region.

‘After a few minutes she bent her forelimbs and lay down. And that was it.’

The Travancore Devaswom Board, which owned Dakshayani, gave the Asian elephant’s age as 88.

‘Gaja Muthassi’ [elephant granny] Dakshayani, pictured, the oldest elephant in captivity, has died aged 88 at a temple in the southern Indian state of Kerala

The oldest elephant in captivity recognised by Guinness World Records was aged 86 – Lin Wang, another Asian elephant which died in 2003 in a Taiwan zoo. Captive elephants have a life expectancy of 40-plus years.

Pineapples and carrots had been introduced to Dakshayani’s diet in recent years to improve her metabolism after she began to have difficulty moving around, probably due to reduced eyesight.

‘For the past three years she did not take part in any temple programme or public function,’ Rajeev said.

‘And a couple of months back, we had even moved her to a better tethering place at an elephant farm in Thiruvananthapuram.’

Wildlife conservationists such as P.S. Easa have criticised the practice of keeping elephants in captivity, regardless of their conditions. 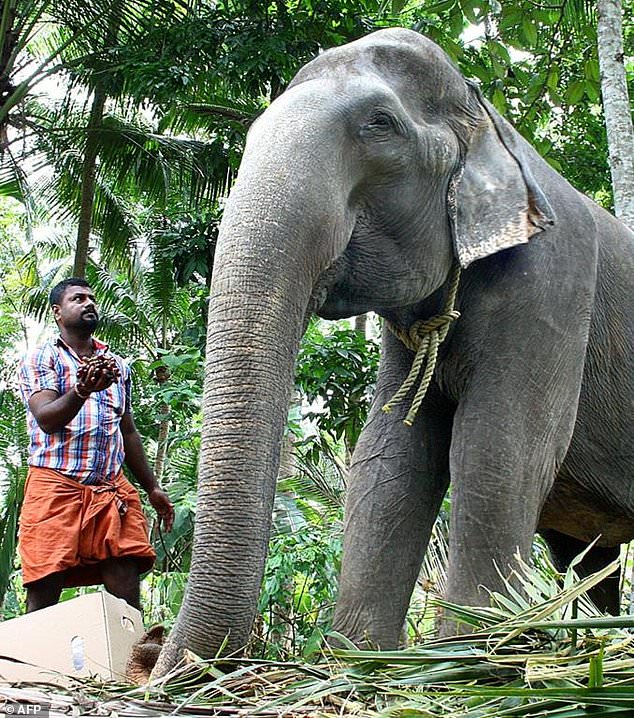 She had taken part in temple rituals and processions in the southern Indian state of Kerala for decades but passed away on Tuesday after becoming reluctant to eat.

He said on Thursday that all such animals should be released to their natural habitat, adding that bestowing titles on elephants did nothing for their well-being.

‘All they want, or for that matter, any animal would want, is to be in their natural habitat and have enough space to move around and sufficient food to eat,’ he said.

Wildlife experts say some 15,000 Asian elephants – or nearly one in three – live in captivity globally, often in dire conditions.

Former Travancore Board president Prayar Goplakrishnan, under whose tenure Dakshayani was awarded the ‘Gaja Muthassi’ honour, defended the decision to keep her in captivity.

He said: ‘Due to various practical constraints, we could not let her loose, but instead ensured that she had more than enough space to move around.’