Ole Gunnar Solskjaer came crashing back down to earth on Thursday morning as he was spotted taking his suit to the dry cleaners after Manchester United’s historic win over Paris Saint-Germain.

No side had ever overcome a two-goal home loss and progressed from a knockout match in Champions League history, but United wound back the years to seal a memorable triumph in the French capital.

Romelu Lukaku scored twice in a frantic first half, although Juan Bernat’s effort meant Solskjaer’s side had to score one more away goal to progress. After a controversial decision by VAR, Marcus Rashford then smashed home a stoppage time penalty to send United through to the quarter-finals. 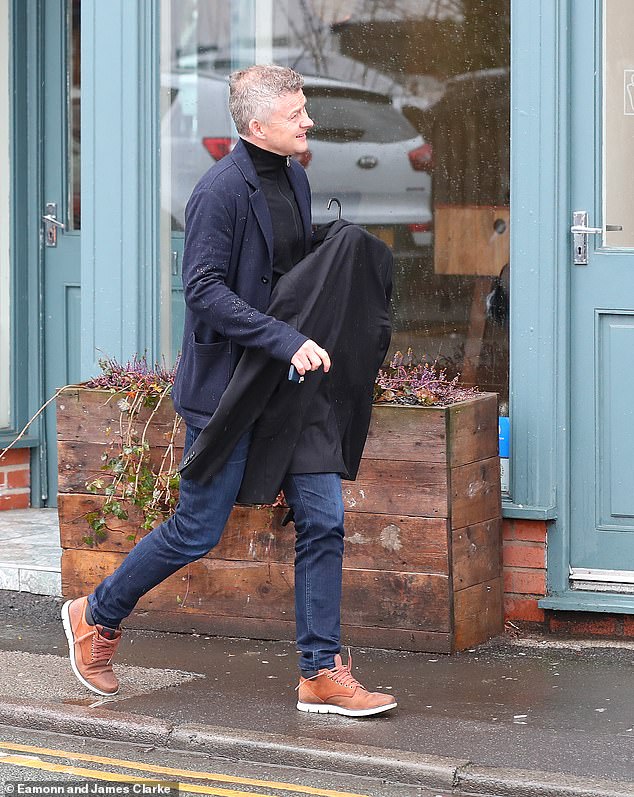 United returned to England in the early hours of Thursday morning and Solskjaer led the way as the players and staff came back through Manchester Airport at 2.25am.

After managing to get a few hours sleep, Solskjaer was out and about and was pictured carrying his suit into a dry cleaners in Hale Village.

The Norwegian looked casual in jeans, boots and a coat as he walked through the miserable conditions in the north west.

Solskjaer will need his suit to be in pristine condition when United return to action against Arsenal in the Premier League on Sunday.

Another momentous occasion for Solskjaer since replacing Jose Mourinho in December has prompted further calls for him to be given the job on a permanent basis.

After the game, Solskjaer said: ‘I am just going to do my best until the summer and see what the club decides. We have to remember tonight. Fantastic night.

‘The spirit of Manchester United. Great to see the boss [Sir Alex Ferguson] in [the dressing room] after the game for the first time. The lads were absolutely magnificent. 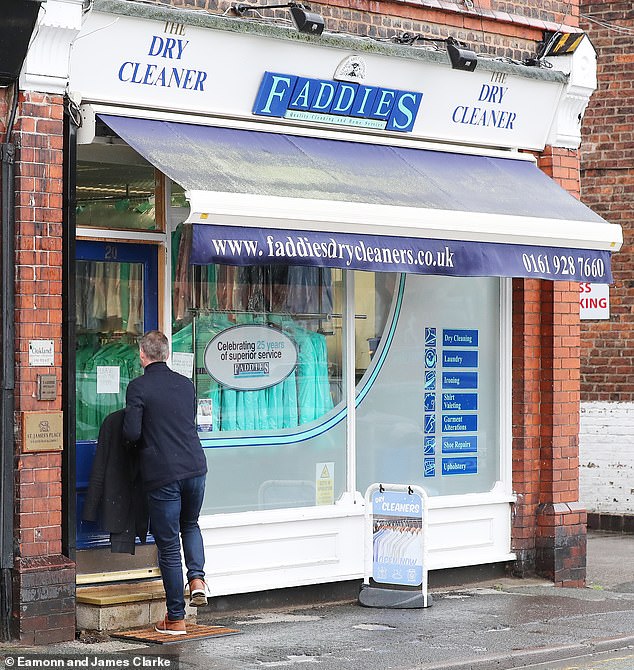 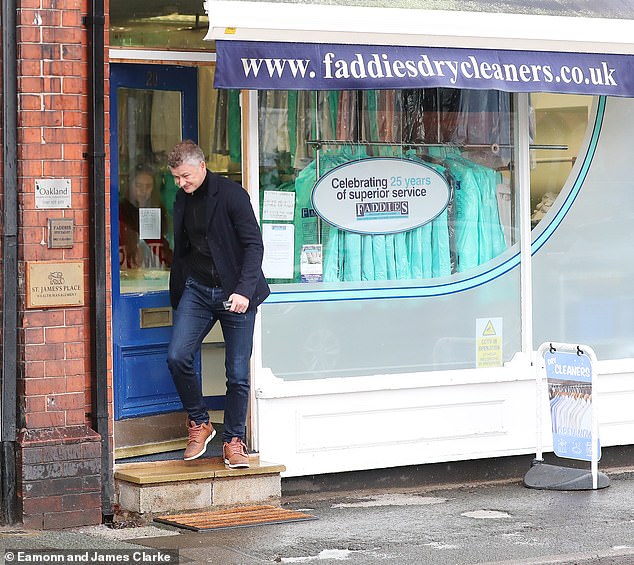 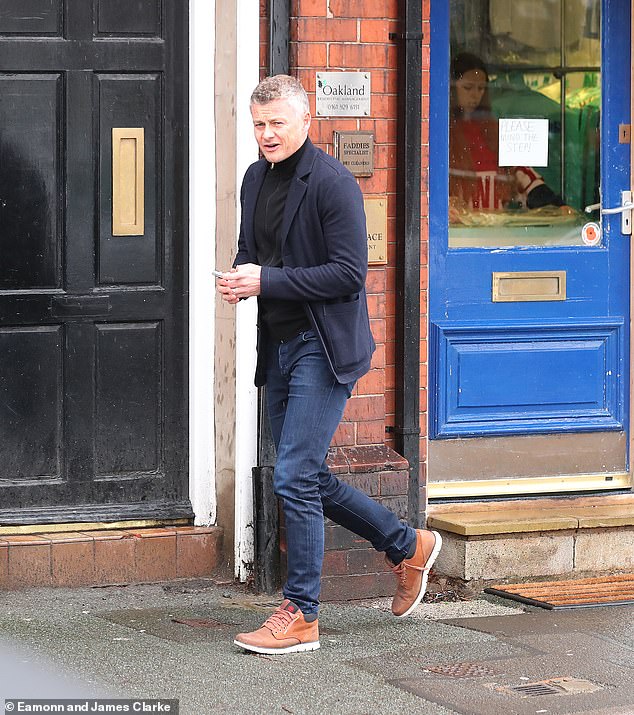 ‘We have a good relationship. It has been fantastic coaching them with Kieran (McKenna), Michael (Carrick), Demps (Mark Dempsey), Mick (Phelan), Emilio (Alvarez). We are a great team together. I think they enjoy us.

‘Definitely [the best night of my managerial career]. Absolutely unbelievable. It was great to be there.

‘These are the moments, you share with your coaching staff, with the players, with the supporters. That is what football is all about. Doing it together.’

The players were chanting the manager’s name in the dressing room after the match and Shaw believes it is a case of when rather than if the Norwegian becomes Mourinho’s permanent successor.

‘I don’t think I need to say much after all these results, it looks certain,’ the United left-back said.

‘We all love Ole and we love the job he’s done so far. We’re enjoying everything that’s going on at the moment and the results have shown that.

‘We’ve had a couple of blips but that’s nine away matches (won in a row) now, they’re not easy games, but it shows what sort of job Ole and his staff have done.

‘Long may that continue.’ 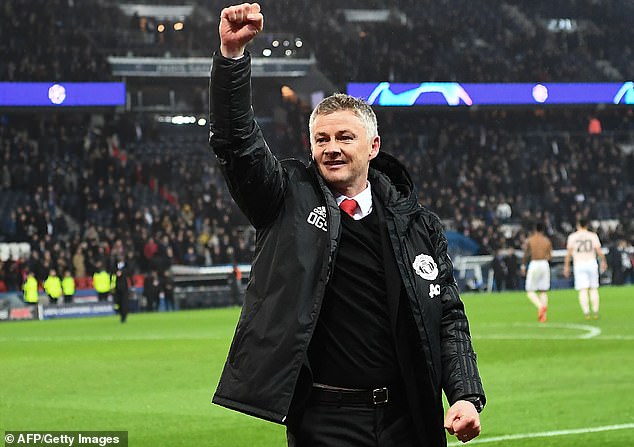 The caretaker boss is ‘certain’ to get the Manchester United job full-time, says Luke Shaw 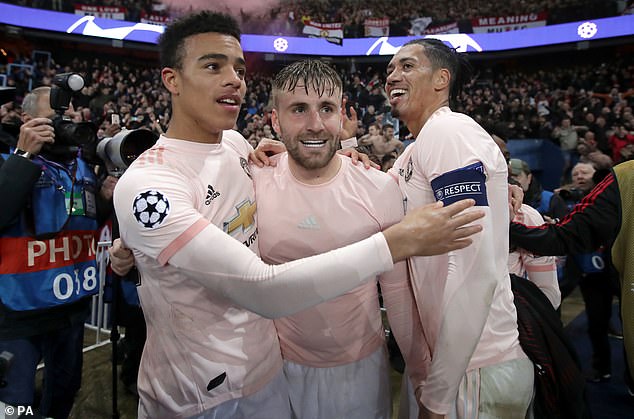 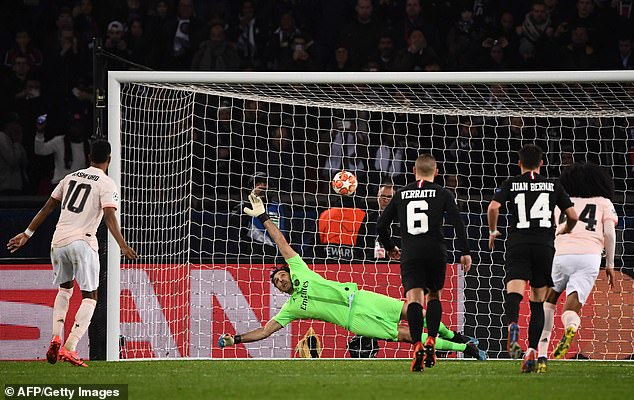 United striker Lukaku echoed Shaw’s sentiments by saying Solskjaer is ‘going to stay, there’s no doubt about that’, before asking: ‘What else does he have to do?’

Skipper Ashley Young went out to film the travelling hordes singing ‘Ole’s at the wheel’ to the tune of the Stone Roses song ‘Waterfall’ after the win and has been just as impressed by the caretaker’s work.

‘It’s not down to the players to decide,’ the full-back said.

‘If you look from the outside you’d say, ‘why not?’ He’s been fantastic since he’s come in, a breath of fresh air.

‘The way he’s gone about the job has been unbelievable. The achievements we’ve made in a short space of time have been fantastic.

‘Luckily for us as players we don’t have to decide, it’s down to the owners and the directors.’