The First Lady of Ukraine looked sombre this afternoon as she opened an exhibition of Russian War in Westminster, nine months after her country was invaded.

Olena Zelenska, 44, wore a smart grey skirt suit with black peter pan collar on the blazer, as she urged the UK to become a leader in helping Ukraine achieve ‘justice’ against Russia.

Looking solemn yet elegant her blonde hair was tied up into a neat low bun and she accessorised with minimal stud earrings.

The wife of Ukraine’s President Volodymyr Zelenskyy addressed an audience of MPs and peers that included Boris Johnson and Sir Keir Starmer, before she toured the exhibition at Portcullis House. 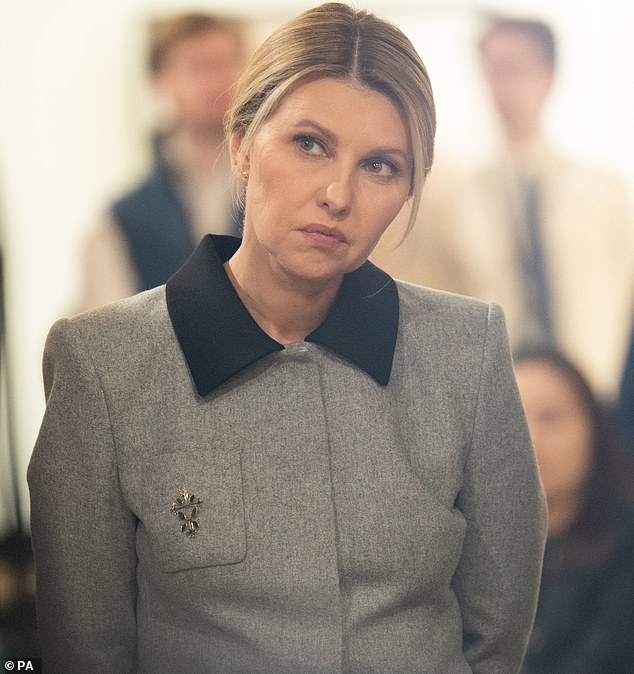 The First Lady, 44, spoke of the harrowing and horrific crimes that Ukraine has endured in the last nine months, since Russia invaded Olena Zelenska was joined by MPs. She wore a smart grey skirt suit, with a black collar on the blazer to the event

The speech, in a Parliament committee room, came as part of a visit to London for Ms Zelenska as she urged the UK and other allies to seek justice against alleged Russian war crimes.

Her visit has focused on the use of sexual violence and rape by Russian forces in the months-long war, which is now heading into a long winter.

And in a harrowing speech to politicians gathered in the Houses of Parliament on Tuesday, she said the youngest known victim of the ‘thousands’ of such crimes was a four-year-old girl raped by Russian occupiers.

In a further stark message she said that the Ukrainian experience today has echoes of the British suffering during World War II.

In front of a Union Jack and Ukrainian flag, she said: ‘Justice like victory is not possible without allies.’ 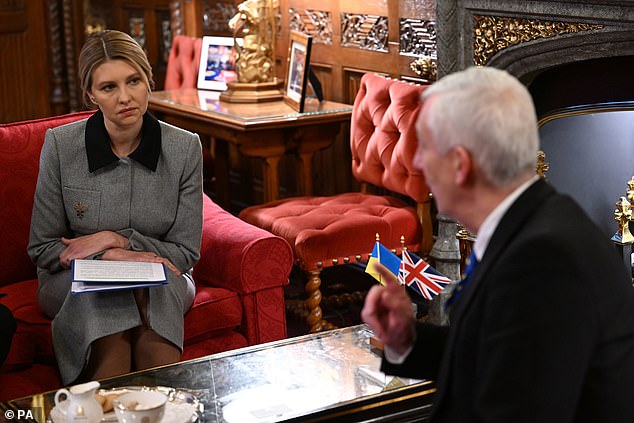 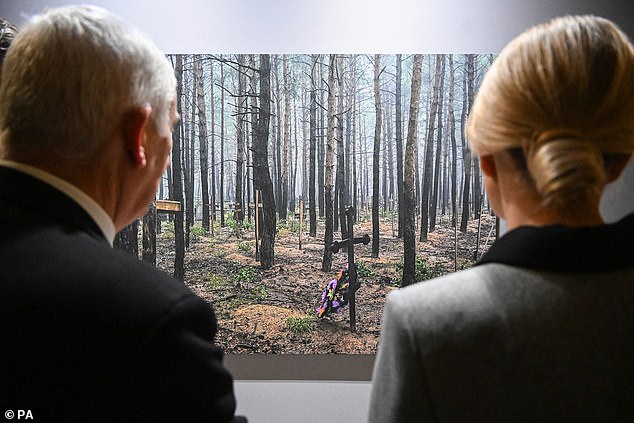 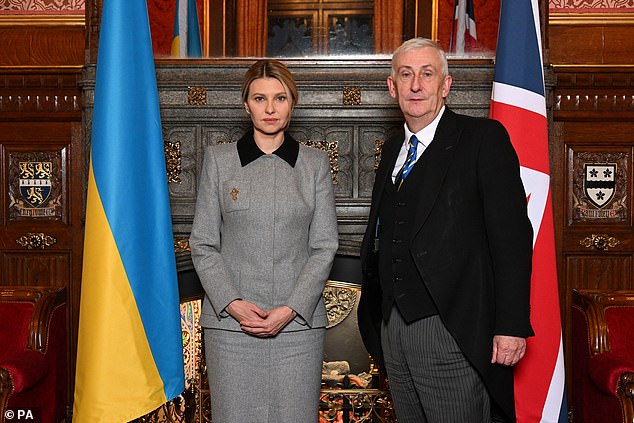 She argued that the International Criminal Court (ICC) does not have the legal force to punish Moscow for its invasion.

Through a translator, she said: ‘We need to start the special tribunal against the crime of aggression of Russia against Ukraine, which will enhance the work of the ICC and not weaken it.

‘We need to unite the world community just as it happened in January 1942 to support the special tribunal against the aggression of Russia against Ukraine.

‘I’m asking you a small favour to become the world leader in the justice efforts. 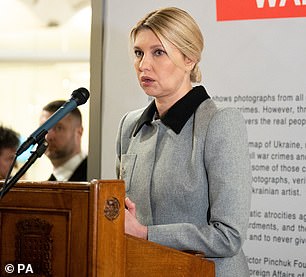 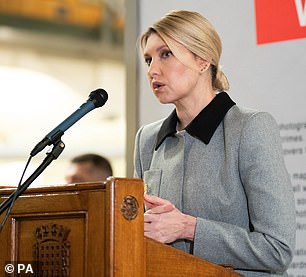 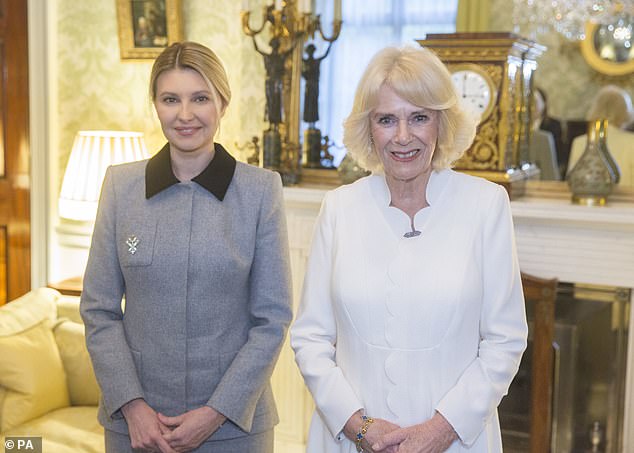 On Tuesday the First Lady was also greeted by the Queen Consort at Buckingham Palace, London

‘I believe that London can give this decisive impetus so that the world can become better, fairer, thanks to you.’

Former prime minister Boris Johnson who had offered vocal support to Ukraine during his premiership, attended the speech alongside the Labour leader as well as the Liberal Democrat leader Sir Ed Davey.

Leader of the House of Commons Penny Mordaunt was also in attendance, alongside MPs from across all parties.

After her speech, Ukraine’s First Lady toured an exhibition in Portcullis House detailing alleged Russian war crimes in Ukraine alongside Sir Lindsay, who called the images ‘shocking, distressing and appalling.’ 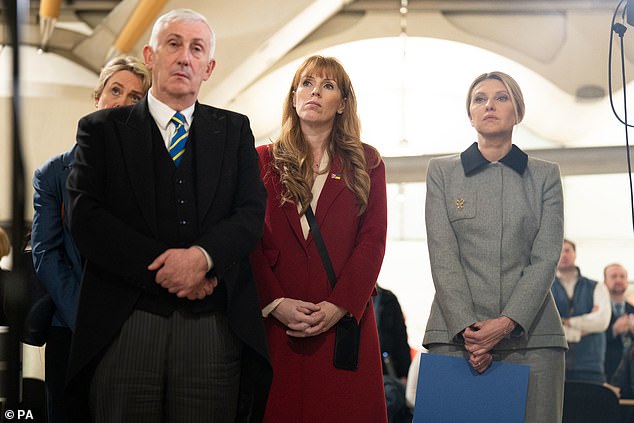 The exhibition, which has already been shown in the European Parliament and NATO headquarters, will remain open until mid-December.

Addressing a silent crowd in Ukrainian, Ms Zelenska spoke of the victims of Russian atrocities in Bucha, Mariupol and elsewhere across her nation, but also warned: ‘Every torturer in this war has his face too. I really want you to look at those photographs.

‘Then your abstract idea of the war in Ukraine will become real.’

The Queen Consort also held an audience on Tuesday with First Lady of Ukraine Olena Zelenska at Buckingham Palace. 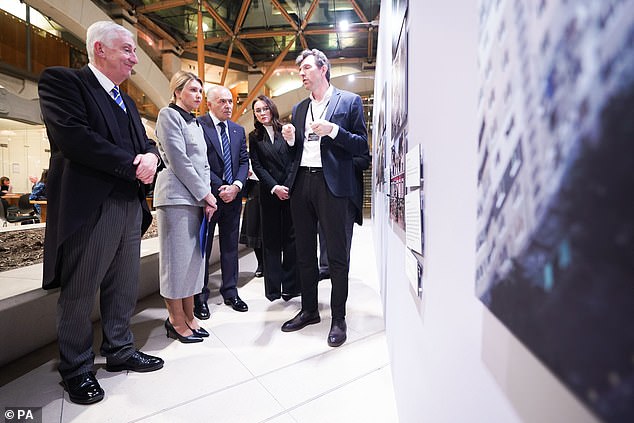 The exhibition, which has already been shown in the European Parliament and NATO headquarters, will remain open until mid-December 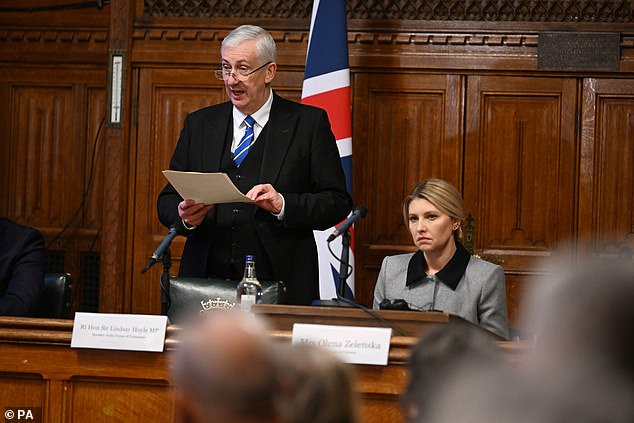 Sir Lindsay, called the images in the exhibition on War Crimes ‘shocking, distressing and appalling’

Earlier, in an interview with BBC Radio 4’s Today programme, Ms Zelenska urged the British public not to forget the “tragedy” of the Russian invasion amid the festive season.

It came after she visited Downing Street and met the Prime Minister’s wife, Akshata Murty on Monday.

Ukraine’s first lady was warmly greeted by Akshata outside 10 Downing St. and the pair posed for pictures before hanging decorations in the Ukrainian colours on the Downing St. Christmas tree. 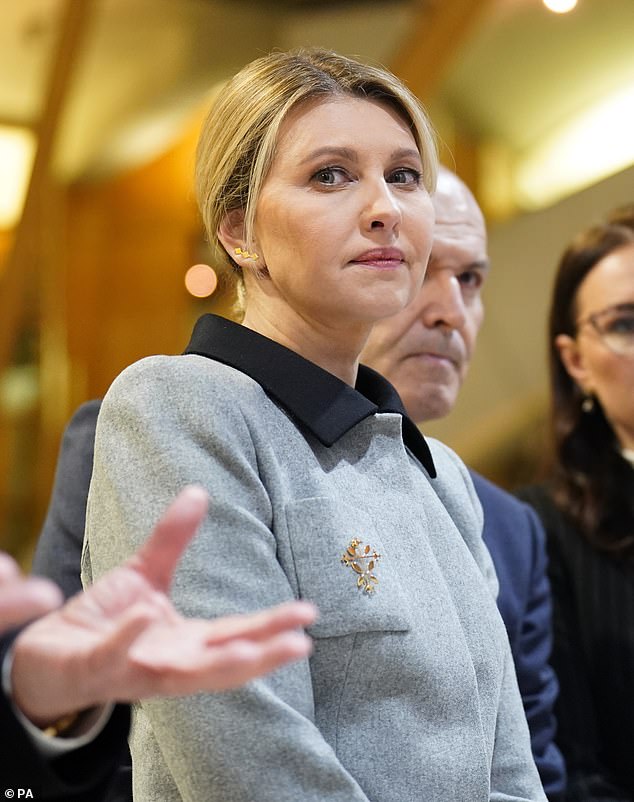 Speaking at the ‘Preventing Sexual Violence in Conflict Initiative’ conference in the British capital earlier today, Zelenska said Kyiv prosecutors were investigating more than 100 possible crimes by Russian soldiers, but added these investigations were ‘just a small’ fraction of the true number of such crimes being committed in Ukraine.

She went on to demand a ‘global response’ to the use of sexual violence as a weapon of war and slammed the wives of Putin’s troops for encouraging their husbands to ‘rape Ukrainian women’. 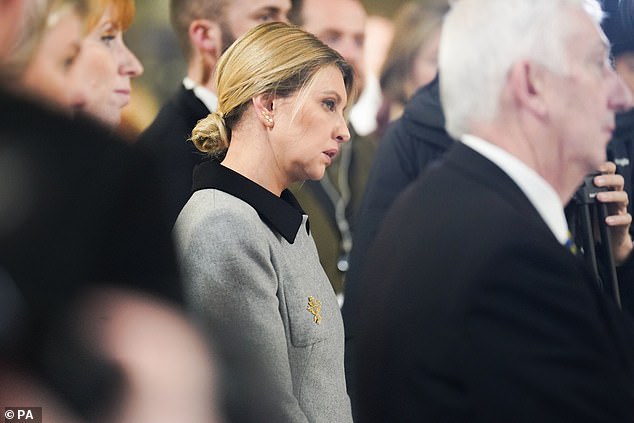 The Ukrainian government has launched a support programme to help victims of the war, which Zelenska said she hoped could be a ‘first step towards an investigation and prosecution’.

Ukraine was looking to set up similar initiatives outside the country, such as in Germany and the Czech Republic, she added.

The Preventing Sexual Violence in Conflict Initiative conference brings together representatives of about 70 countries to tackle the scourge of sexual violence in conflict. 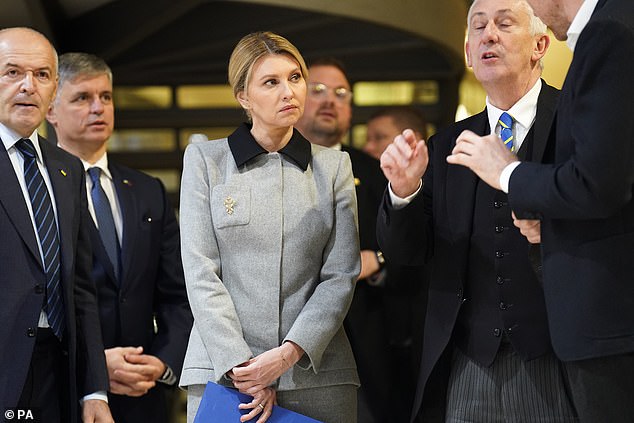 First Lady Olena Zelenska surrounded by Britons at the opening of the exhibition, including Sir Lindsay Hoyle

It has heard from Nobel Peace Prize laureates Nadia Murad and Denis Mukwege, who won a joint award in 2018 for their work against the issue, as well as survivors.

Britain launched a year-long campaign to highlight the issue as part of its presidency of the G8 group of industrialised nations in 2012, which then included Russia, backed by Hollywood actress Angelina Jolie.

She said in a message to the latest meeting that there ‘has to be a decisive global response’ to such assaults.

‘When there isn’t, it sends a message to both the victim and the perpetrator that we don’t truly regard this as a significant crime that needs to be punished and prevented,’ she added.