OLIVER HOLT: In a Games beset by loss and adversity, Naomi Osaka may prove to be the shining light

At the Beijing Olympics in 2008, the Opening Ceremony was an assault on the senses. It was breathtakingly lavish and meticulously choreographed.

Armies of acrobats lined up in their battalions on the stadium floor of the Bird’s Nest, gymnasts scaled its rafters and row after row after row of drummers drummed out the message that this was the dawning of the Chinese century.

A ping from a Covid app is the soundtrack of our lives now. Opening Ceremony big-show themes like triumphalism and vainglory are dead.

And so on Friday night, when athletes marched into Tokyo’s elegant Olympic Stadium, some of them marched straight back out again rather than hang around for the lighting of the flame. The brotherhood of the Olympics is one thing, but Olympians catch coronavirus, too. Other athletes waved to spectators who weren’t there as if the gesture were a muscle-memory they could not shake.

It was about creating an alternative reality. If television viewers thought spectators were there, they were there. This is a time when athletes applaud ghosts in empty seats and broadcasters replace the silence of unattended sporting events with the fake noise of recorded cheers. Because the silence makes us uncomfortable. It reminds us.

This Opening Ceremony did not pretend that the world had not changed and it was better for that. It was pitched perfectly for a delayed Games that was full of regrets before it even started. Some competitors like the British shooter, Amber Hill, didn’t even make it to Tokyo because of Covid. Their absence hung heavily in the stadium, too. 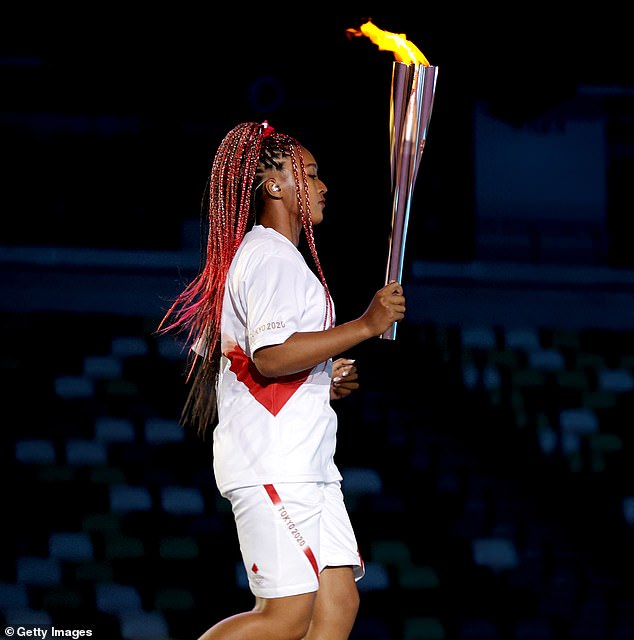 In many ways Osaka represents the uncertainty, melancholy and the loneliness of our times

Instead of triumphalism, the Opening Ceremony gave us the haunting image of a competitor running on a treadmill, picked out by a spotlight, all alone in the vastness of the floor of the arena. So many of the images of the ceremony were about solitude and melancholy rather than the usual diet of relentless attainment that we are fed at events like this. Again, it was better for it.

And at the end of this four-hour paean to uncertainty, loss and perseverance, a woman stood at the bottom of a flight of steps that led to the summit of a model of Mount Fuji. Naomi Osaka had been chosen to light the Olympic flame and as she climbed slowly up the stairs, her torch aloft, it felt as if the organisers had picked the perfect athlete to be the face of these Games.

In many ways, Osaka represents the uncertainty and the melancholy and the loneliness of our times. She does not try to project an air of invincibility or arrogance like many of her rivals. In recent months, she has been open about her battle with depression and self-worth and the anxieties that flood over her when she has to face a room of journalists who want to talk to her about the state of her game.

Her life, as she tells it, is about obligation rather than joy. Some see contradictions in her vulnerability. She withdrew from the French Open last month and missed Wimbledon because she said the thought of facing a series of post-match press conferences that might have played out to 30 or 40 journalists provoked in her ‘huge waves of anxiety’. 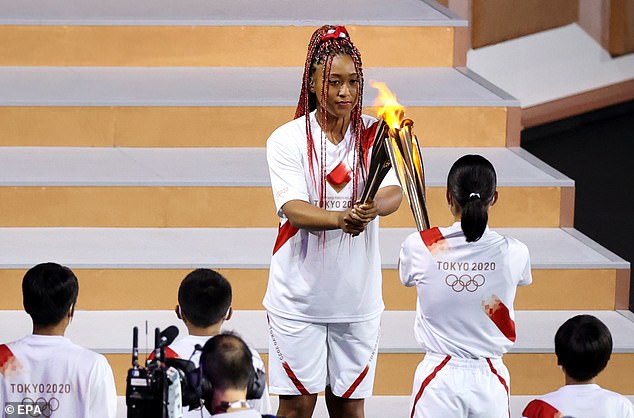 What others see as contradictions are not her contradictions, though. When she stares out at a room of journalists, it seems she sees hostility and a gathering that plays on her insecurities. When she held the Olympic torch in her hand, perhaps she did not feel scrutiny but love.

And so on Friday, she climbed those stairs to the top of that model Mount Fuji, knowing that the eyes of billions of television viewers were watching her every step, knowing that they were gazing down on her as she extended her torch into the cauldron shaped like an unfolding cherry blossom and lit the Olympic flame.

There seemed something wonderfully fitting about that image, too. This is a young woman, probably the best current female player in the world, a winner of four Grand Slams by the age of 23, battling with her uncertainties so much that she has not felt able to compete in the last two Majors and facing the scorn of those who have told her to ‘woman up’.

And yet on what is, for her, the biggest stage of all, lighting the Olympic flame in her home country, she faced down all those fears and those anxieties and climbed those steps back to the summit of the mountain. No matter that she had not lifted her racket in competition: this was the first great performance of the Tokyo Games.

‘Undoubtedly the greatest athletic achievement and honour I will ever have in my life,’ wrote Osaka, who begins her quest for Olympic gold at the Ariake Tennis Centre this morning, on Twitter on Saturday of her starring role in the Opening Ceremony. ‘I have no words to describe the feelings I have right now but I do know I am currently filled with gratefulness and thankfulness.’ 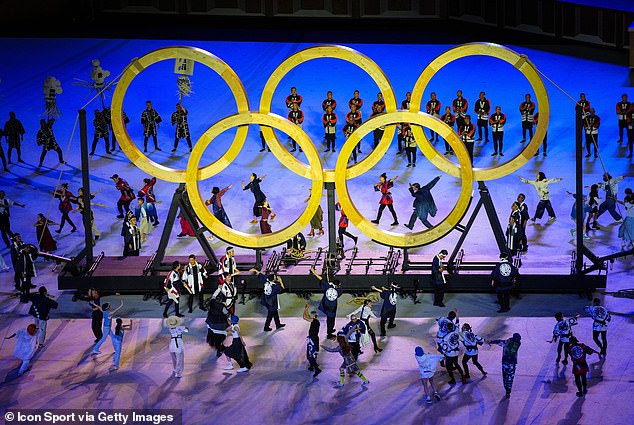 There were some similarities between the role Osaka performed here and the fact that Cathy Freeman was chosen to light the Olympic flame before the Sydney Games in 2000. Freeman was held up as a symbol of hope of reconciliation between Australia’s Aboriginal population and the descendants of the country’s white settlers. Eight years later, the Australian government finally apologised to the indigenous population and its Stolen Generations.

Osaka’s place in Japanese society is more nuanced but as the US-raised daughter of a Japanese mother and a Haitian father, she has not been immune to prejudice in her home country. Japan is one of the least ethnically diverse nations on earth and Osaka’s rise to prominence and her political activism have challenged preconceptions of how Japan’s sports stars should behave.

Her honesty about her struggles with mental health have struck a chord with many, too. A previous generation of sports stars may have believed that to admit to vulnerability was to give an opponent a critical advantage. Mental health issues were conflated with weakness. That kind of attitude was particularly prevalent in Japan, where stoicism is highly prized but Osaka has encouraged a new generation to feel ‘it’s OK not to be OK’.

She is a heroine for that generation, a sports star who refuses to hide in plain sight. These are the Olympics of vulnerability and of emptiness but by climbing to the summit of that mountain, Osaka has already proved that even though adversity is all around here in Tokyo, triumphing over it has an even greater power to inspire. 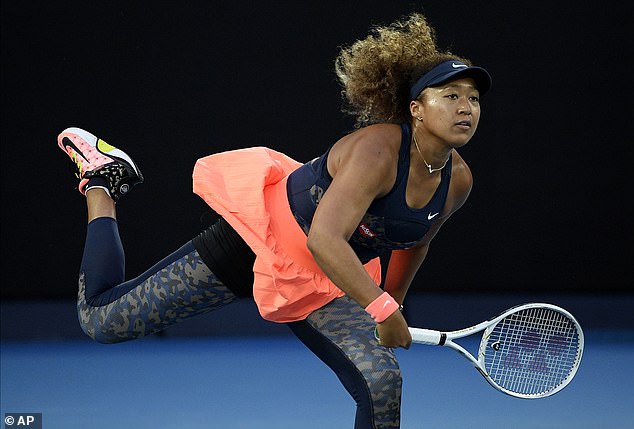 Her honesty about her struggles with mental health have struck a chord with many, too

Perhaps it is pointless comparing the policing of an event with no fans to the demands of organising security for the final of the European Championship at Wembley, but it still felt instructive to attend the Opening Ceremony of the Olympic Games in Tokyo on Friday night and be reminded how the chaos that enveloped the England-Italy match this month might have been avoided.

In Tokyo, much of the area around the Olympic Stadium had been turned into a sterile zone, made inaccessible to traffic by roadblock after roadblock.

If there had been fans, those without tickets would not have got close to the stadium. 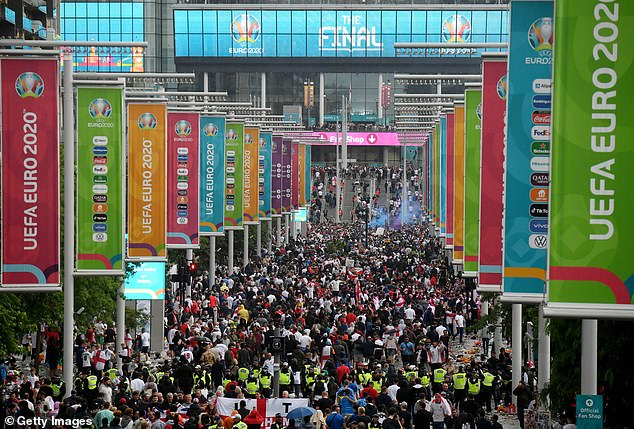 At Wembley, it’s different. It has got to the point where we seek to celebrate the drunken mayhem that happens near the stadium before matches.

Camera crews assemble at the Boxpark on Wembley Way to record revellers hurling their beer into the air when England score.

The area around the stadium is full of retail outlets. Until we gain the will to restrict that area to ticket-holders, we risk more of the kind of chaos Tokyo would not countenance.