Olivia Newton-John’s second-time cancer diagnosis has left her with limited mobility and a need for medical marijuana to ease the pain.

She underwent a partial mastectomy, chemotherapy and breast reconstruction, which left her with a clean bill of health.

But recent back pain that left her unable to walk revealed her breast cancer was back and it had metastasized to her spine.

The singer underwent radiation treatment to help her stage 4 cancer diagnosis, but she said in an interview Sunday that her husband’s grown medical marijuana has helped her through the pain.

Olivia Newton-John attended her cancer foundation’s gala on Friday. The singer has been mobile the last couple weeks after taking off from her concert tour when she found out her breast cancer was back and it had spread to her spine

Olivia’s postponed the first half of her concert tour to the US and Canada in May after her back pain was so severe that it left her crippled and unable to walk.

The back pain revealed that her breast cancer was back and it had metastasized to her spine, which mean she was at the most severe stage of the diagnosis.

Metastasized cancer means it has spread to other areas of the body besides the original area of growth. Common areas to spread from the breast include the bones, lungs, liver or brain.

Cancer cells can spread undetected by invading nearby healthy cells.

This indicates the chance of surviving five years after diagnosis.

SPREADING TO THE SACRUM:

Olivia Newton-John has revealed her breast cancer spread to her sacrum.

The sacrum is at the base of the spine.

Spinal metastases occur in up to 10 percent of cancer patients. It can cause extreme back pain, bowel issues and urinary incontinence.

Since the sacrum is located very close to neural and vascular structures, surgery can be complicated.

As a result, most patients will be treated with radiotherapy.

The cells can also enter through the capillaries and take over surrounding tissue in the body.

It is not uncommon for the cancerous cells to spread to other parts of the body, but there is only a 10 percent chance for it to go to the sacrum, or lower spine.

The spine is a dangerous area for cancer to spread because of its risk of causing paralysis or limited mobility if surgically operated on.

There is a 22 percent chance of survival after five years for stage 4 breast cancer patients.

But Olivia remains hopeful that she will overcome her diagnosis.

A social media post from Olivia in May said she would be receiving a short photon radiation treatment to get her back to her work life.

She said: ‘I decided on my direction of therapies after consultation with my doctors and natural therapists and the medical team at my Olivia Newton-John Cancer Wellness and Research Centre in Melbourne, Australia.’

This radiation kills both the cancer and healthy cells in the body to get the dangerous cells under control.

It is a popular course of treatment if surgery produces too many risks for the patient.

But Olivia said the one treatment that has really helped her recover and relieve her back pain is the medical marijuana her husband, John Easterling, has been growing for her.

Olivia spoke about her experience with medical marijuana on Australia’s 60 minutes Sunday.

‘My husband’s a plant medicine man so he grew cannabis for me and made tinctures for me to take for pain and inflammation and so many other things that cannabis can do,’ Olivia said.

Research into medical marijuana has claimed that some people find relief from chronic pain if they use it.

And Olivia said it has been a ‘no-brainer’ for her as she doesn’t like to use prescription medicine.

‘The pain level was really the hardest thing,’ Olivia said. ‘I was trying to do shows and it was pretty agonizing.’

Olivia’s daughter Chloe Lattanzi, who is part owner in a cannabis farm, had earlier revealed that her mum was using cannabis oil as part of her treatment. 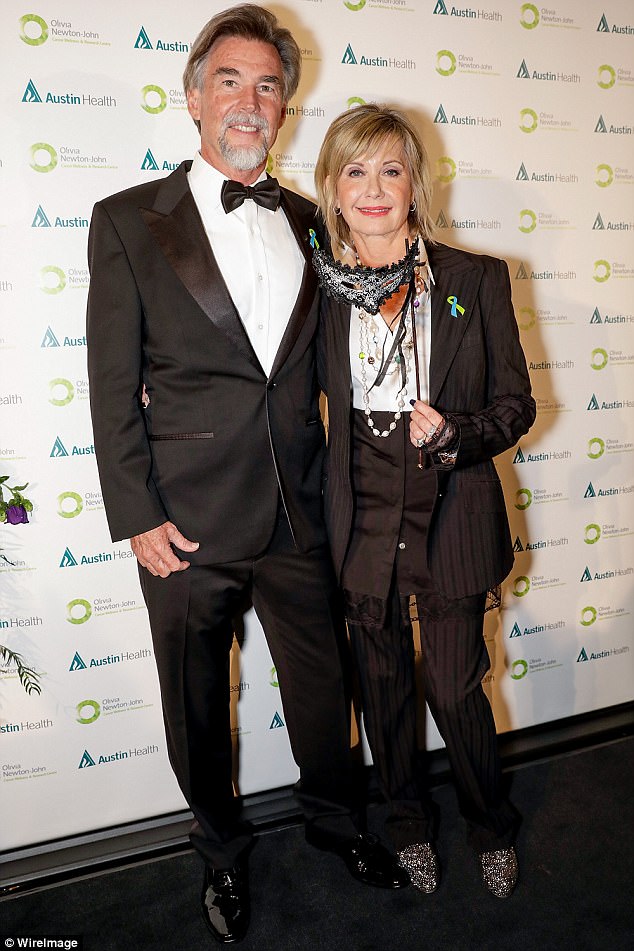 Olivia and her husband John Easterling (left) matched in black suits at her gala. He has helped her with her cancer diagnosis by growing his own medical marijuana plant. She said this has helped her deal with her back pain and other cancer symptoms 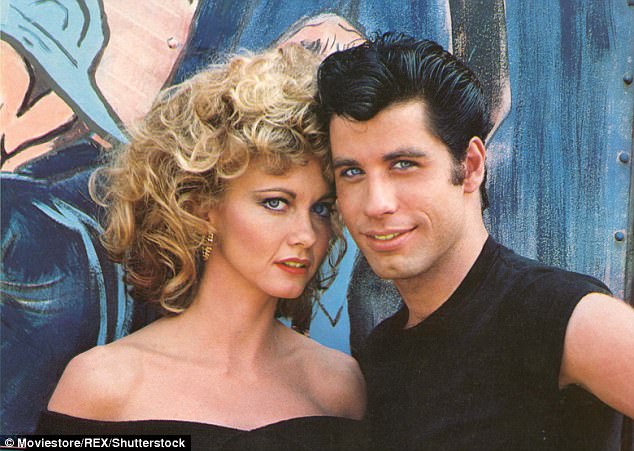 The Grease star thinks she will have to live with the diagnosis the rest of her life, but she is upbeat that she will be able to get it under control

The cannabis plant where medical marijuana comes from has different strains that can be used a range of symptoms people are experiencing.

Two of the most popular strains used are tetrahydrocannabinoil (THC) and cannabidiol (CBD).

THC is most commonly found in recreational marijuana and produces the ‘high’ feeling people associate with the drug.

CBD is an antipsychotic and doesn’t produce the same type of feeling as THC for the user.

This strain has been tested for its benefits in relieving pain and inflammation for the user.

It’s a plant that has been maligned for so long and has so many abilities to heal.

It has been created into oil, vaping and wax among other things for people to use medically when they are relieving pain or other symptoms.

But research is still slim about the plant’s benefits and risks for people medically.

The US Food and Drug Administration in the still considers marijuana to be a schedule 1 substance, meaning there is not enough research to yet prove its benefits.

This hasn’t stopped it from growing in popularity as more states legalize it for medical use, and Olivia said it has been important to her recovery.

‘It’s a plant that has been maligned for so long and has so many abilities to heal,’ Olivia said, ‘It’s an important part of treatment and it should be available.’

Her tour has yet to be rescheduled as she continues to recover during her diagnosis.

But she has gone to more events recently including the gala for the Olivia Newton-John Cancer Research Institute.

Olivia remains in high-spirits that she can beat this diagnosis and is now able to walk short distances.

‘I’ve had and I’m having an amazing life,’ she said. ‘So I have no complaints. We all have something we need to go through in life and this has been my challenge.’

How is CBD used and what its effects

Cannabidiol (CBD) is a natural element found in a cannabis plant. It is lesser known than THC and does not produce the same ‘high’ that people experience when they have recreational marijuana.

CBD is an antipsychotic:

This means that the drug helps manage psychosis such as hallucinations, delusions or paranoia. Antipsychotic drugs are used for bipolar disorder and schizophrenia.

Marijuana with CBD strains are used to help with chronic pain, PTSD and epilepsy

How is THC used and what its effects

This means that the drug has a significant effect on the mental processes of the person taking it.

Marijuana with THC are used to help with chemotherapy, multiple sclerosis and glaucoma.