A gravely ill newborn’s pounding heart rate stabilised after his parents went to visit him in hospital on Christmas Day.

Ollie Dennan wasn’t able to move or breathe when he was born and lived in hospital for the first four months of his life.

He was born 10 weeks prematurely through an emergency caesarean section, which saw his mother Sarah Dowd, 29, lose a lot of a blood.

Doctors managed to stabilise Ollie, who was then transferred to a specialist neonatal intensive care unit where he was diagnosed with congenital myotonic dystrophy.

The rare condition causes a combination of muscle stiffness, wasting and weakness as well as respiratory and neurological problems.

As a result, he had to spend his first Christmas in hospital, accidentally dislodging his breathing tube on December 25, leading to his heart rate dropping dramatically.

Medics managed to save Ollie using chest compressions, but he continued to suffer worrying palpitations – which only lessened once his parents arrived for a visit.

Ms Dowd has spoken for the first time to highlight the condition as Ollie, now 14 months, will enjoy his first Christmas at home after spending last year’s in hospital.

Ms Dowd, of Chester, said: ‘We were told he’d been having concerning palpitations the entire time we were gone, but that they’d subsided as soon as we were near.

Ollie Dennan, now 14 months, wasn’t able to move or breathe when he was born and lived in hospital for the first four months of his life

‘We’d been to see Ollie in the morning then left for lunch. When we came back, we saw the doctors and nurses working on him.

‘I felt frozen, I couldn’t move. I didn’t want to turn my back on him. You feel useless, and so helpless that you can see him struggling and can’t do anything.’

It took three weeks until Ms Dowd and her partner, Lewis Dennan, 26, a trainee engineer, were able to cuddle Ollie, who was born weighing 4lb 4oz.

Recalling the moment his son was born unable to breathe, Mr Dennan said: ‘I just remember feeling very numb and not knowing what to say or do.

‘I put a brave face on it, though. We have this attitude of, “You just have to get on with it. Whatever you’re dealt, you deal with it”.’

Ms Dowd said her pregnancy with Ollie – her first child – had been textbook, except for some extra scans when she couldn’t feel him moving.

The scans later confirmed he was growing normally.

Then in October 2016, at just 30 weeks, the healthcare assistant’s waters broke as she sat at home on the sofa. 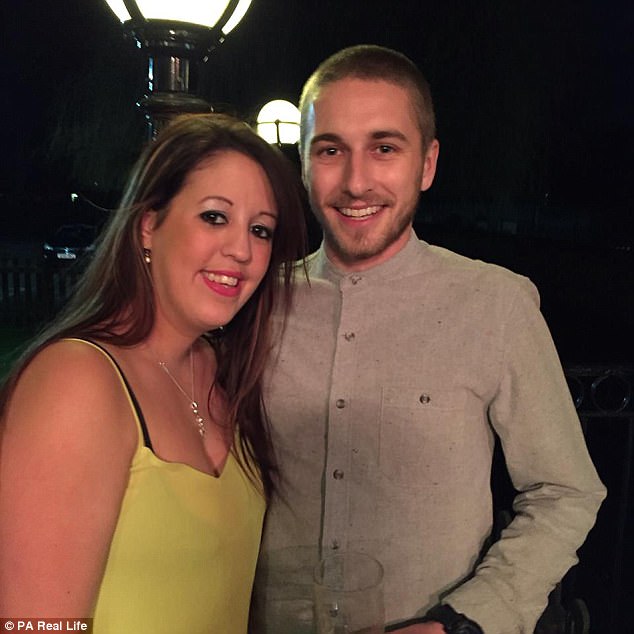 He was born 10 weeks prematurely through an emergency caesarean section, which saw his mother Sarah Dowd (pictured with her partner Lewis Dennan) lose a lot of a blood

The rare condition, which can cause breathing difficulties for the baby shortly after delivery, can be seen if the infant appears to be ‘floppy’, have poor head control and lack of facial expression.

Babies with the condition may also suffer from speech difficulties, and physical and intellectual milestones may be delayed.

The disease is a genetic condition that progressively weakens and wastes the muscles.

However, many are unaware they are ‘carriers’ of the disease where a gene spontaneously changes.

The affected muscle fibres degenerate and are slowly replaced with fatty tissue.

The impact of the degeneration varies significantly; some people may only find it difficult to carry out day-to-day tasks while others will have a seriously shortened life expectancy because of the condition.

Sadly, congenital myotonic dystrophy can be fatal, especially in the early weeks of life.

There is no cure or treatment.

She recalled: ‘Lewis said to me, “What are you doing? You’re weeing”. And I said I wasn’t, but when I got up there was water everywhere.’

Rushing to Countess of Chester Hospital, midwives discovered Ollie’s heart rate was dropping and that he wasn’t getting any oxygen.

In order to save her baby, the mother-to-be was raced down to theatre for an emergency caesarean section.

During the procedure, medics discovered her placenta had abrupted – a condition affecting around one per cent of pregnancies.

It happens when the placenta breaks away from the wall of the womb before the baby is delivered – which they concluded had caused her early labour.

Mr Dennan recalled: ‘I was a bit numb because I was trying to take in all the information in and try to be supportive for Sarah.

‘It was a struggle for me to portray things to Sarah without upsetting her too much. She’d just had a big procedure, so I didn’t want her to take a turn.’

With Ms Dowd stabilised, Ollie was taken to Arrowe Park Hospital where for three weeks, he lay in an incubator, his parents unable to hold him as he was too fragile.

Then, three weeks after he was born, weighing 4lb 4oz, they finally got their first cuddle.

Ms Dowd said: ‘It was overwhelming. You don’t realise how much love you’ve got for this little boy.

‘I didn’t think I could love someone so much. I just didn’t want to let him go. 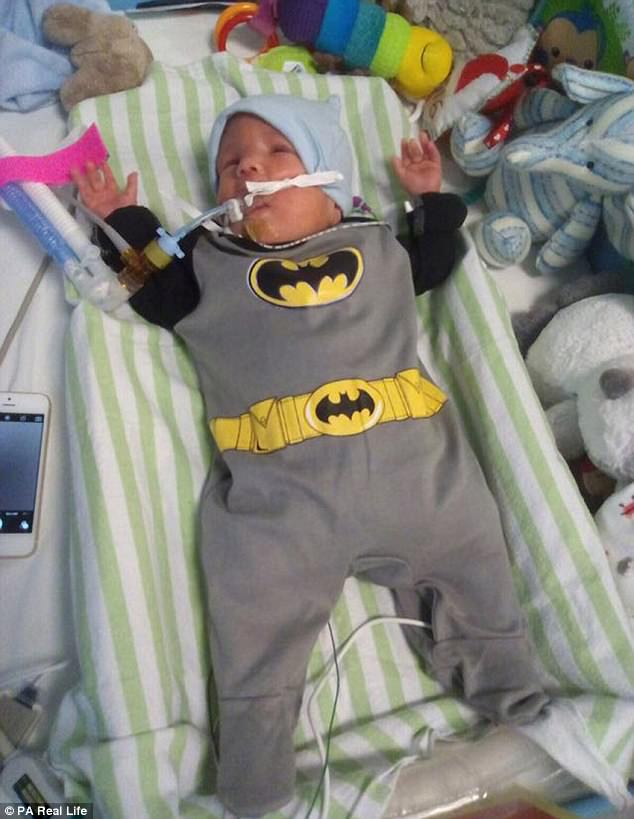 Doctors managed to stabilise Ollie, who was then transferred to a specialist neonatal intensive care unit where he was diagnosed with congenital myotonic dystrophy

‘He was so tiny. I felt like I couldn’t even breathe heavily because I didn’t want to hurt him.’

Mr Dennan said: ‘It makes you a bit more appreciative, because you think you’re just going to have a baby and be able to hold them straight away – and we’d missed out on that for weeks.’

The next day, Ollie was officially diagnosed with congenital myotonic dystrophy via a blood test, which doctors had conducted because he’d been born not moving.

Ms Dowd added: ‘When I found out, I had to walk out the room, and cried. I just couldn’t listen to it anymore. I was distraught.’

Next, Ollie was transferred to Alder Hey Children’s Hospital in Liverpool to receive specialist treatment.

Having been ventilated since birth, he eventually came off and began using a mask instead in January.

For four months, he remained in hospital until he was finally strong enough to go home in February.

Whilst he lived in hospital, the family were able to secure accommodation nearby thanks to charity Ronald McDonald House. 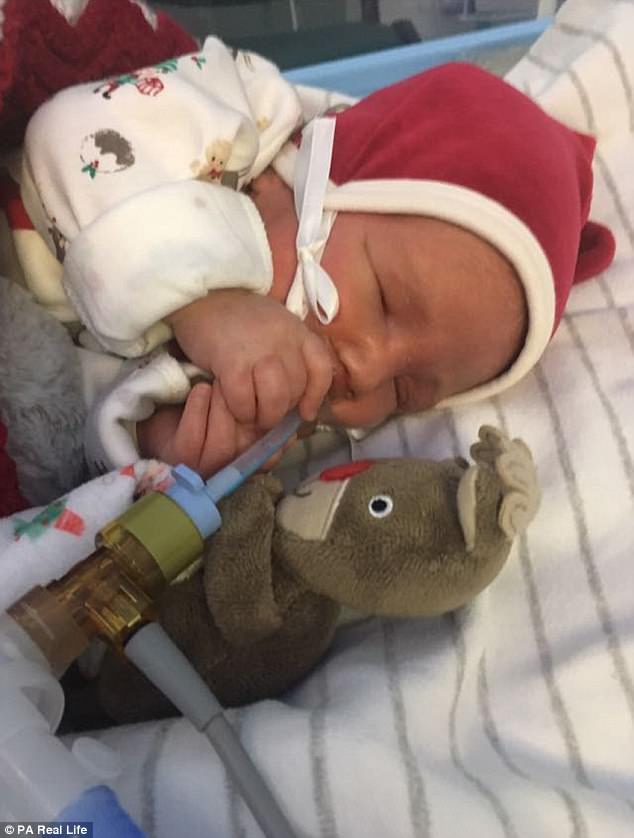 The rare condition causes a combination of muscle stiffness, wasting and weakness as well as respiratory and neurological problems 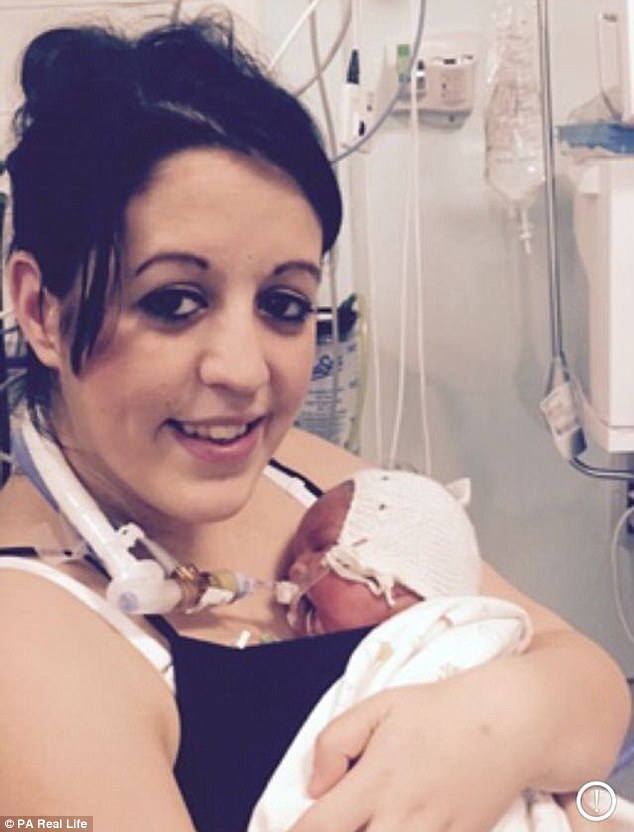 As a result, he had to spend his first Christmas in hospital, accidentally dislodging his breathing tube on December 25, leading to his heart rate dropping dramatically

Ms Dowd said: ‘Having the Ronald McDonald House was so comforting.

‘If anything was wrong with Ollie, I was just above him. I could run down the stairs and I was there.

‘It was nice to know that if something did happen you were there, and it was nice that I knew he was sleeping beneath me.’

Though his exact prognosis is unknown, Ollie, who is having regular physiotherapy, appears to be progressing well.

Now, he’s only using his breathing mask and feeding tube at night.

Though the muscle-wasting condition means he cannot sit up unaided, he’s still able to move his arms, recently learning how to high five.

And, though doctors warned he may never be able to smile because it uses so many muscles, his mother said he grins and chuckles away.

Now, the family, who are supporting the Congenital Myotonic Dystrophy Fight Fund, are looking forward to Ollie’s first Christmas at home – a stark contrast to last year.

Mr Dennan said: ‘Last year, the hospital did all they could to make it nice.

‘A band came in, and there were decorations on the ward, and stockings on all the incubators. 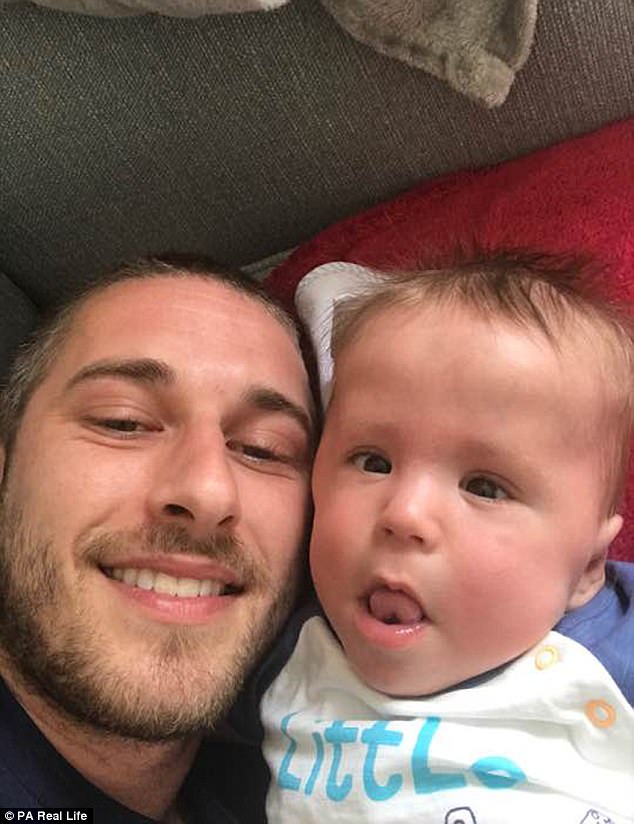 Medics managed to save Ollie using chest compressions, but he continued to suffer worrying palpitations – which only lessened once his parents arrived for a visit 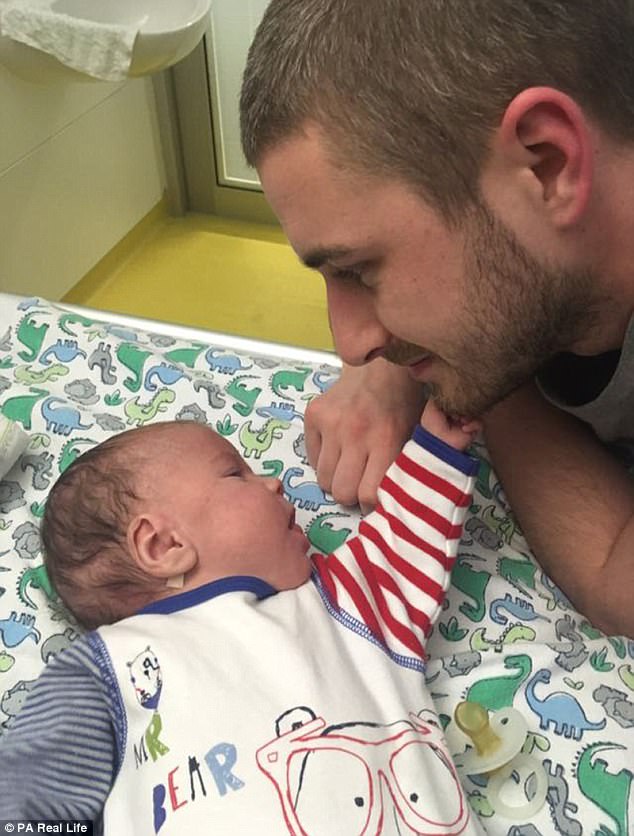 It took three weeks until Ms Dowd and her partner, Lewis Dennan, 26, a trainee engineer, were able to cuddle Ollie, who was born weighing 4lb 4oz

‘Shops donated food to the Ronald McDonald House in Arrowe Park Hospital too, so families could make Christmas dinner – but it was always in the back of your mind that your baby was so poorly.

‘We hope by sharing our story we can also raise some awareness of Ollie’s condition, as a lot people haven’t heard of it and a lot of the support around it is reliant on charity funding alone.’

Ms Dowd added: ‘I’m just so excited to put the Christmas tree up, because he didn’t get to have one last year.

‘We’re going to take Ollie to see Father Christmas and all the reindeers. He absolutely loves Christmas lights too.

‘We’ll spend the morning at home opening presents, then visit family for lunch and Christmas films in matching festive pyjamas.

‘He’s such an amazing boy – so chilled. He hardly ever cries, and just takes everything in.’