A man who sparked a panic in a crowded shopping mall has explained that he didn’t intend to look like an ISIS gunman with his bumbling Halloween costume.

Families fled in terror from the Oak View Mall in Omaha, Nebraska on Friday night, after a robed figure carrying a duffel bag and what appeared to be an M16 strode into the Monster Mash Bash.

‘It was a packed place, there were kids everywhere,’ mother Desirae Anson recalled in an interview with KETV.

Anson hustled her son out of the mall. Security guards alerted the police, who raced to respond.

A robed figure carrying a duffel bag and what appeared to be an M16 strode into the Monster Mash Bash at the Oak View Mall in Omaha, Nebraska on Friday night, sparking a panic

‘Anything really could have happened,’ Anson said. ‘So, it’s better to be safe than sorry in that kind of situation.’

The mysterious figure in long black robes left as quickly as he appeared, before cops or security guards could approach him.

But the robed man didn’t leave before terrified mom Anson’s family snapped a photo of him, surveying the crowd of tots and parents with a black rifle seemingly ready at his side.

The photo went viral through a local parents’ group on Facebook – and to his own horror, one dad quickly recognized himself.

Hugo Mendoza, the father of two young daughters, came forward quickly when he realized the panic his costume had unintentionally caused.

The gun was a toy, he explained, and the costume was from the 2010 movie ‘The Town’, which features bank robbers disguised as nuns. 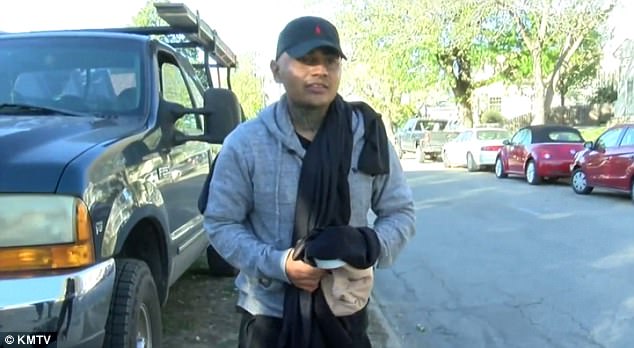 Hugo Mendoza, the father of two young daughters, shows the nun mask he was wearing as he explains the costume was from the 2010 film ‘The Town’, where bank robbers dress as nuns 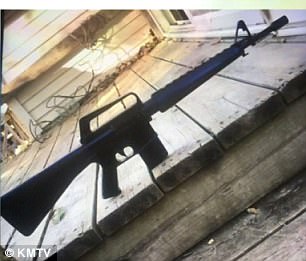 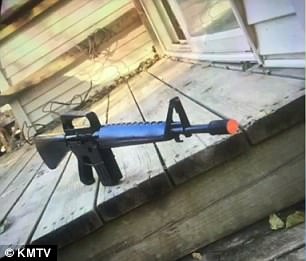 Mendoza shared these pictures of the toy gun he was carrying. The orange plug in the tip is only visibly looking down the barrel of the mock M16 assault rifle

‘It’s a costume,’ Mendoza told KMTV. ‘I mean, if it was something bad, why would they sell it?’

‘I was there to have a good time with my daughters and my girlfriend. I wasn’t there to scare little kids or make people feel uncomfortable,’ Mendoza continued.

The embarrassed dad shared photos of the toy gun he was toting on Friday, which show that the orange tip is visible looking down the barrel, but not from the sides.

Anson told the CBS affiliate that she believes Mendoza should have known better, even if he didn’t intend to start a panic.

‘Myself, I know nothing about guns,’ she said. ‘I don’t know what real guns look like.’

‘So I was just like okay he has a duffel bag. Let’s get out.’