A super-rich Omani sheikh has snapped up not one but two luxury Knightsbridge flats within a stone’s throw of Harrods – a £17million apartment for his family, and an £8million pad with Hyde Park views for their fleet of staff.

At a total £25million, the sale of the two apartments, which are within a 10 minute walk of one another, represents the highest value flat sale for period properties in the area in more than two years – and suggests the neighbourhood’s popularity with the Middle East’s super-rich has not abated.

The sheikh, whose name has not been disclosed, is understood to be one of Oman’s wealthiest retail magnates, presiding over an empire that incorporates shopping malls and super-car dealerships.

While both the five-bedroom, £17million property on Cadogan Square, and the £8million, four bedroom flat at nearby Parkside are housed within grand period buildings, each has been refurbished and redecorated with contemporary flair.

The first flat, priced at £17million, is located on the corner of the prestigious Cadogan Square in Knightsbridge, and will serve as the Sheikh’s London base 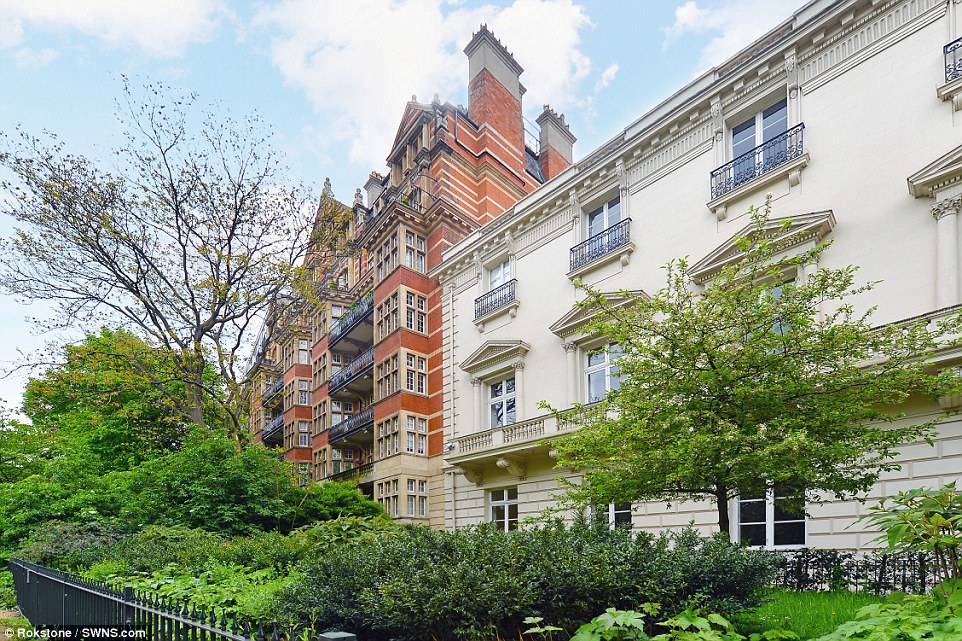 He also snapped up a second, £8million property a ten minute walk away at Parkside, to house the family’s army of staff

Ultra-prime estate agent Rokstone said the combined sale – a total of £25million – represented the highest value period-property flat sale in the district for over two years.

The two properties are both refurbished and dressed lateral apartments located in grand period buildings.

The first is an interior designed and dressed 6,000 sq.ft five bedroom lateral apartment located on the corner of Cadogan Square priced at £17 million. The second is a dressed 2,400 sqft four bedroom flat on Parkside, overlooking Hyde Park priced at £8 million. Both properties are within 10 minutes walk of each other.

Blended, the deal achieved a value of over £3,200 per sq.ft, the highest price achieved for second-hand flats in period buildings in the local area for over two years, according to Rokstone. 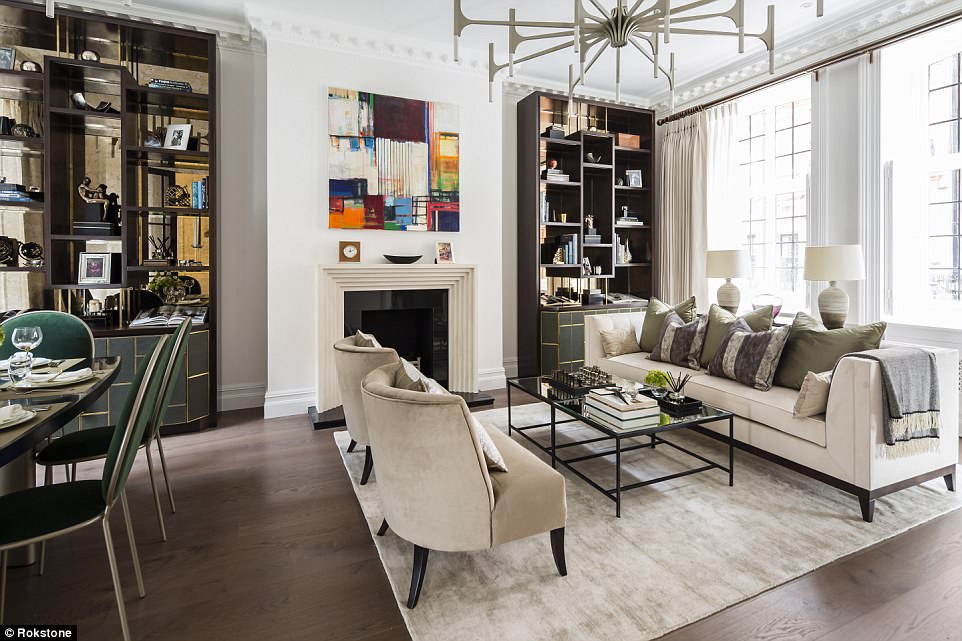 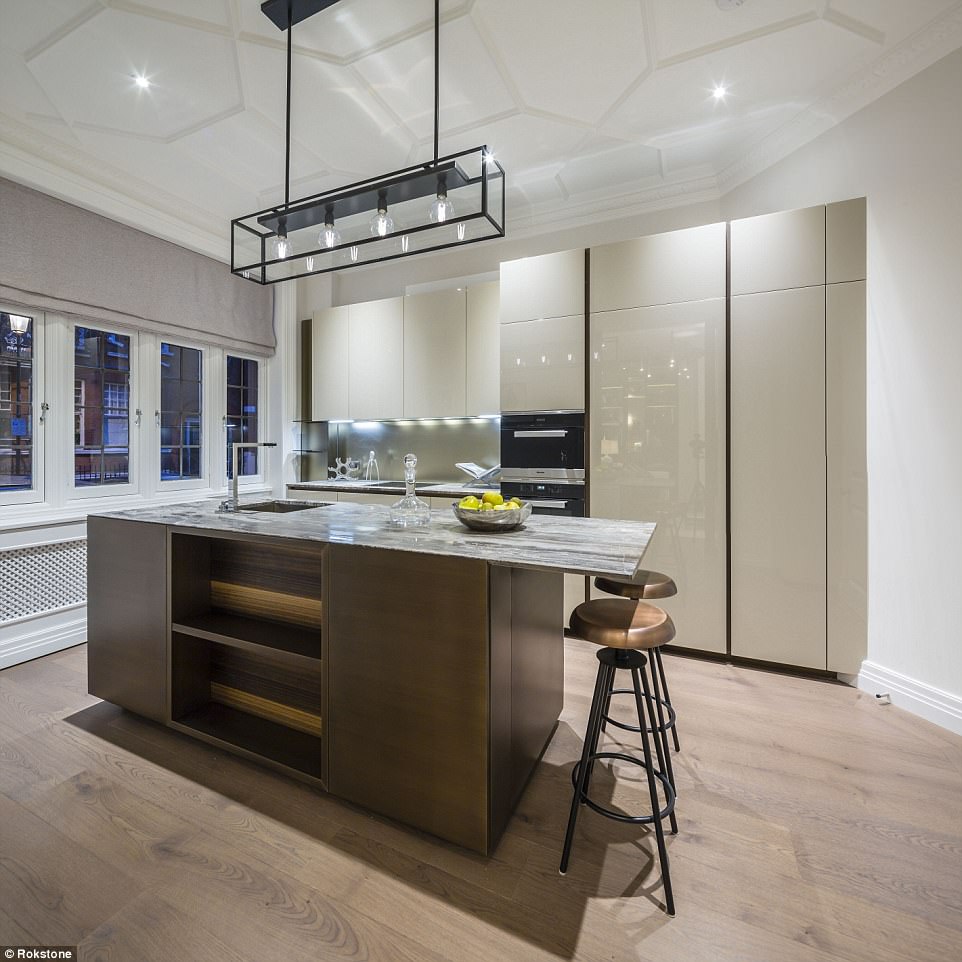 It may be inside one of Knightsbridge’s grand period buildings, but the £17million flat has all the mod-cons – including a stunning kitchen 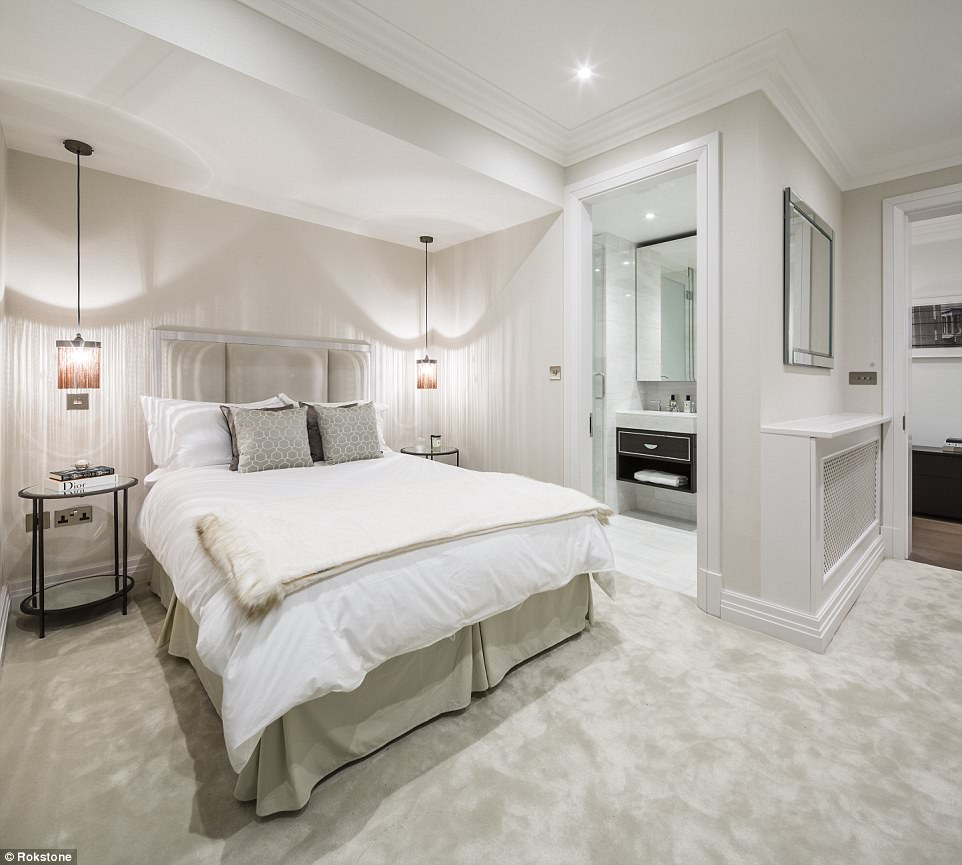 The sheikh wanted a property that was ‘ready to move into’, and opted for this £17million apartment decorated in a neutral palette with plenty of luxurious touches 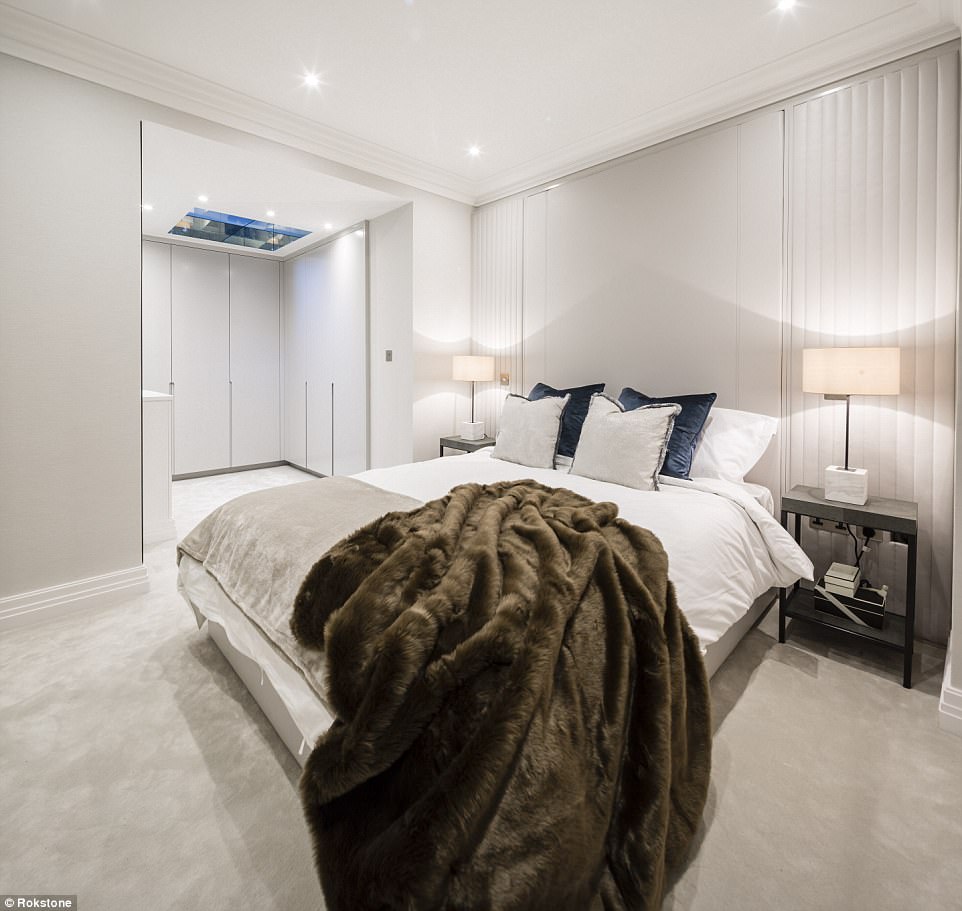 Another of the flat’s five sumptuously decorated bedrooms, complete with textured throws and cushions on the double bed 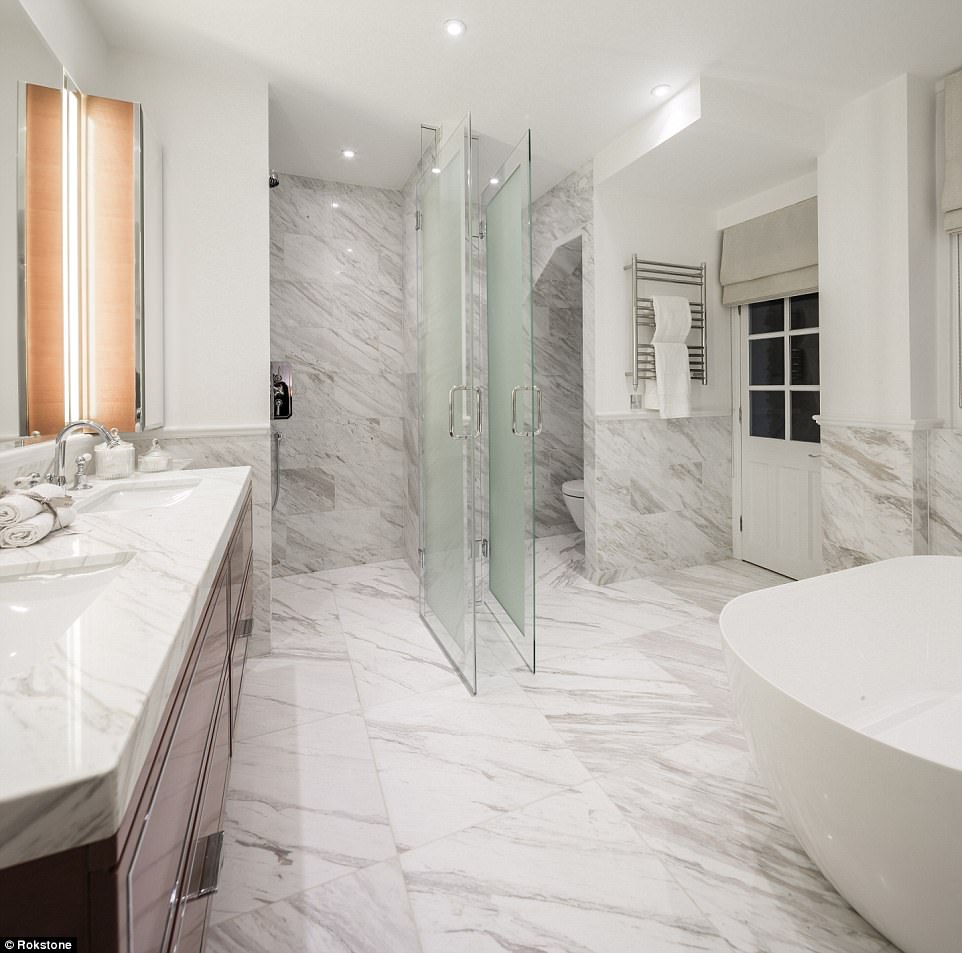 An ensuite bathroom with his and hers sinks, a walk in shower and separate toilet cubicle, and marble as far as the eye can see 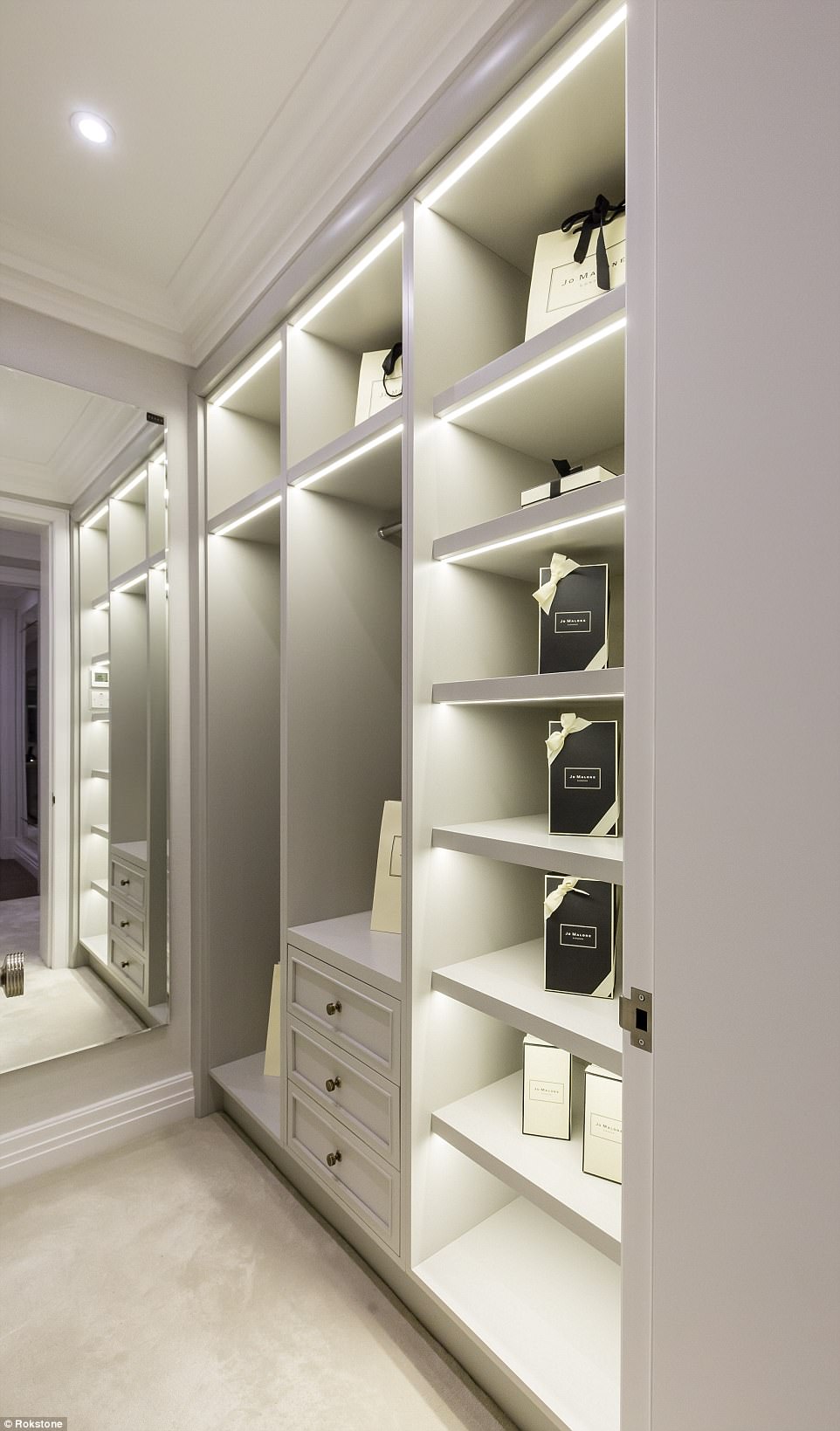 When you live next door to Harrods, you need a walk-in wardrobe to house all of your designer gear. For now the closet has been filled with expensive scented candles

According to Rokstone, the buyer was in the market for a large family home, or two family flats within easy reach of one another, in order to provide them with a London base.

The sheikh insisted that the properties should be within a 10 minute walk of both Harrods and Hyde Park.

Becky Fatemi, Rokstone’s managing director, said: ‘This £25 million Knightsbridge deal is a record period-flat sale for the area, the highest sale in over two years.

‘The sales prove that London remains a leading location of choice for the super-rich,’ she said. 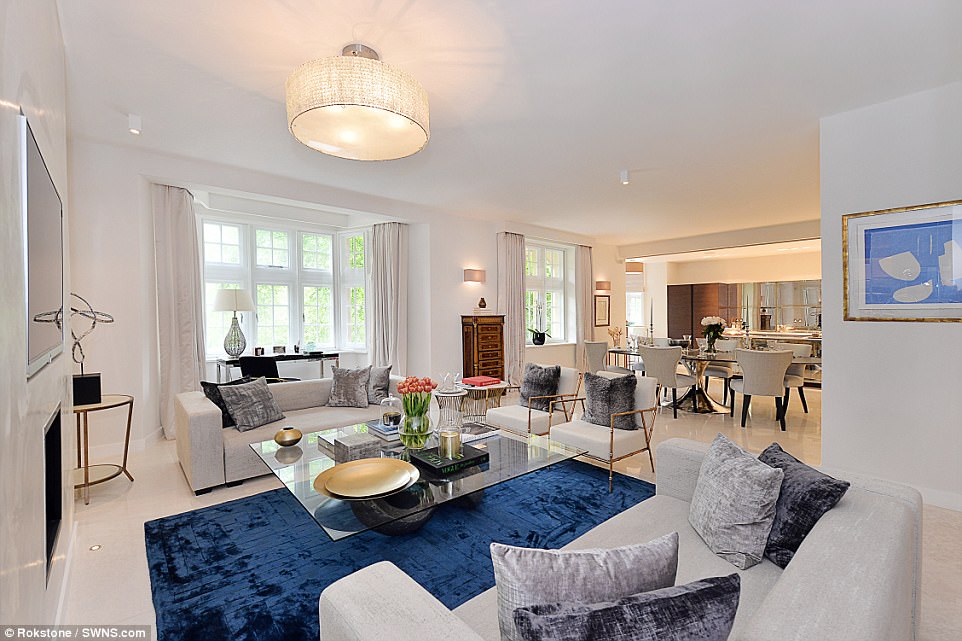 Staff quarters: The plush living room inside the £8million flat that will house the sheikh’s army of staff in London 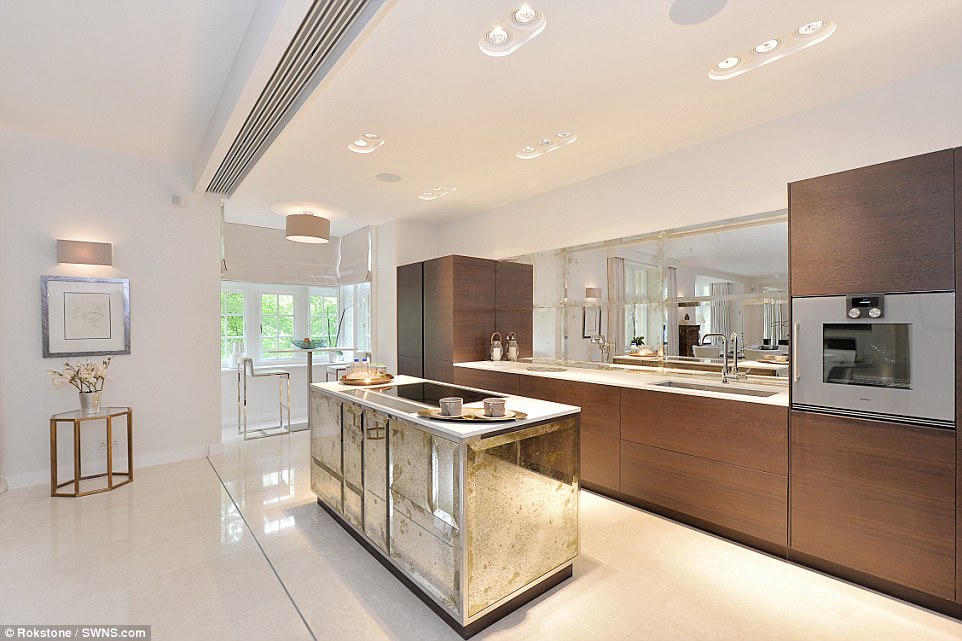 The two multi-million pound apartments are within a ten minute walk of one another – and both are within easy reach of Harrods, said to be the family’s favourite department store 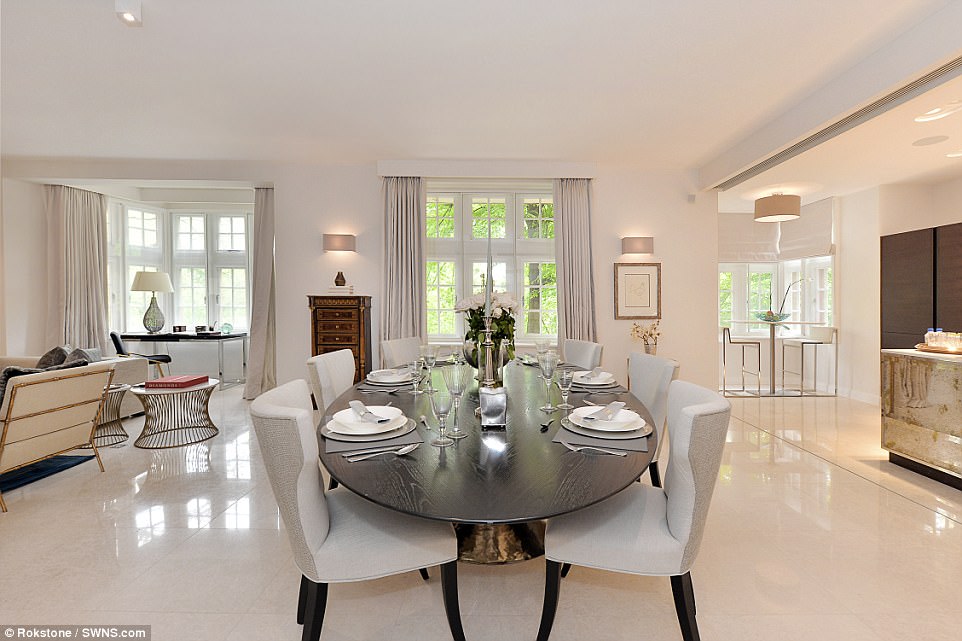 Together, valued at a total £25million, the sales represent the highest value sale for period properties in the neighbourhood in two years 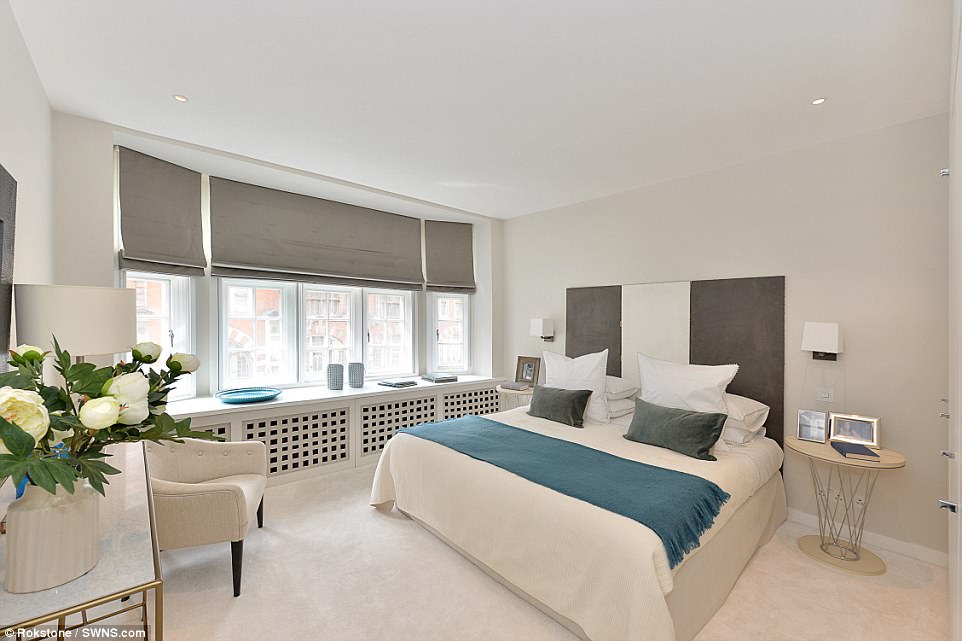 ‘There were several key selling points for the family. Firstly they were only interested in Knightsbridge and they wanted to live within 10 minutes walk of Harrods. The other key attractions that led to the deal were the fact that both are large ‘family-flats’, recently refurbished and fully dressed, so just like a hotel suite the family could occupy both properties immediately.

‘For luxury deals for values above £10 million in central London its become a buyer’s market, and purchasers have become extremely discerning and exacting on their requirements. 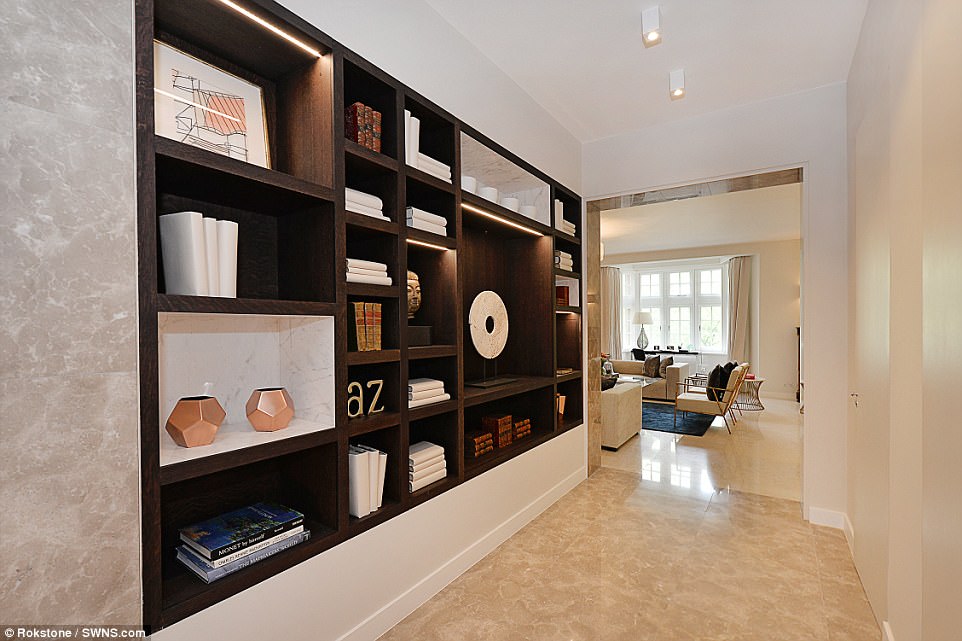 The sheikh was only interested in properties that had been fully furnished and decorated to a high standard, Rokstone said 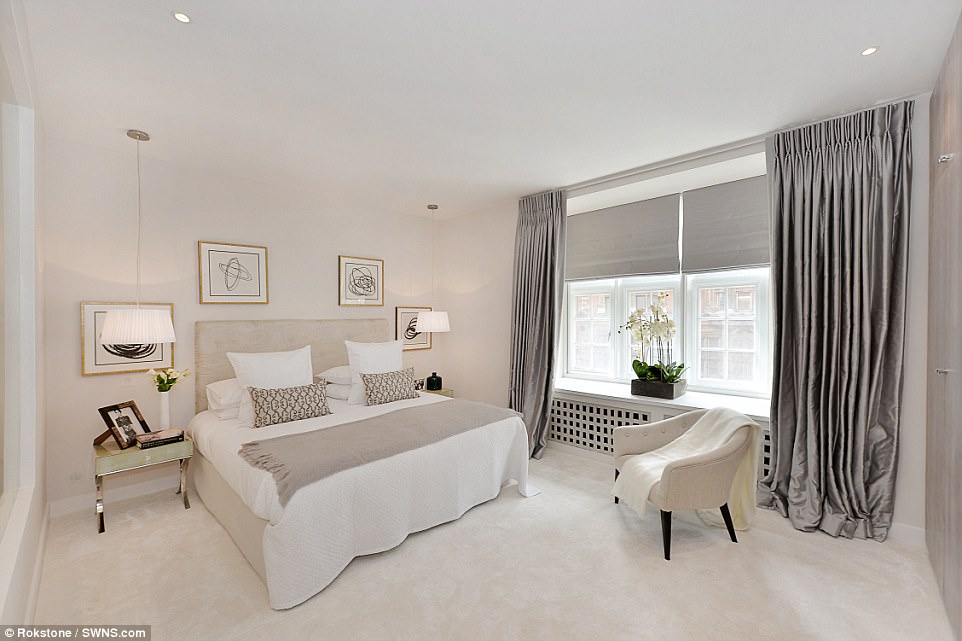 The less expensive of the two flats at £8million, the Parkside property will house the family’s staff and overnight guests 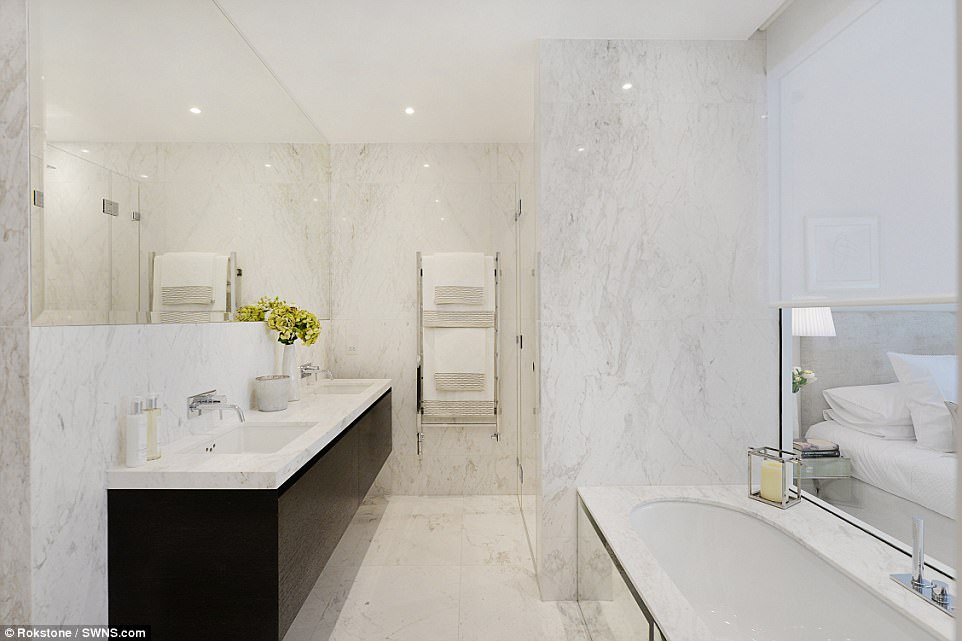 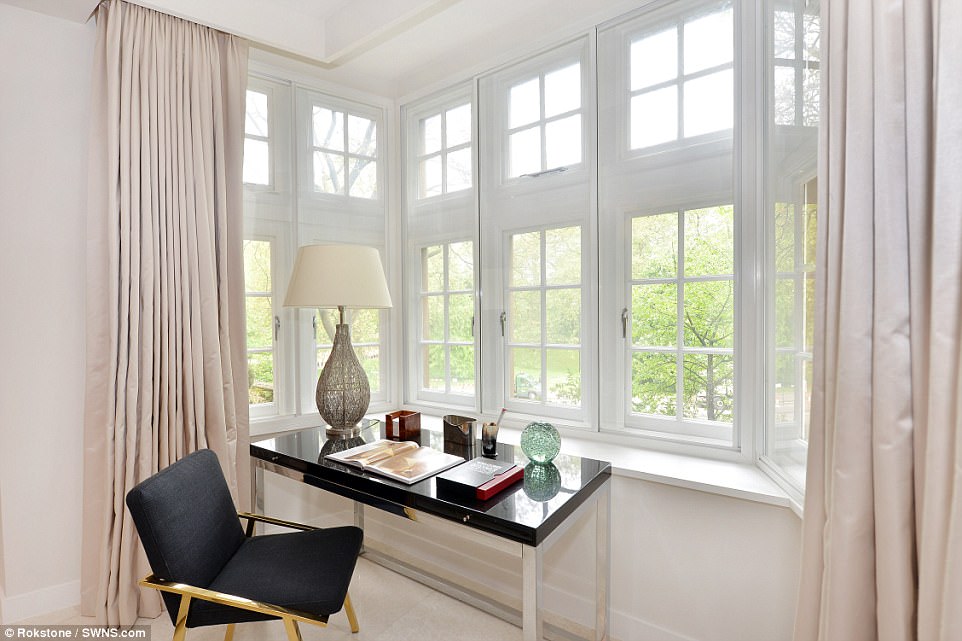 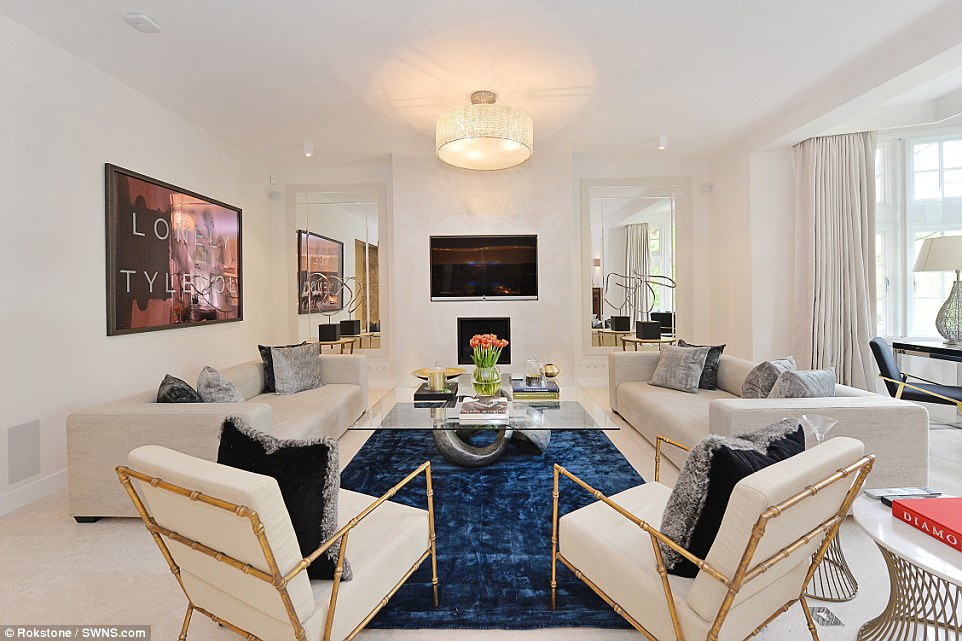 The lavish living room inside the Parkside property, which together with the Cadogan Square pad represents the highest per square foot value sale in Knightsbridge in two years 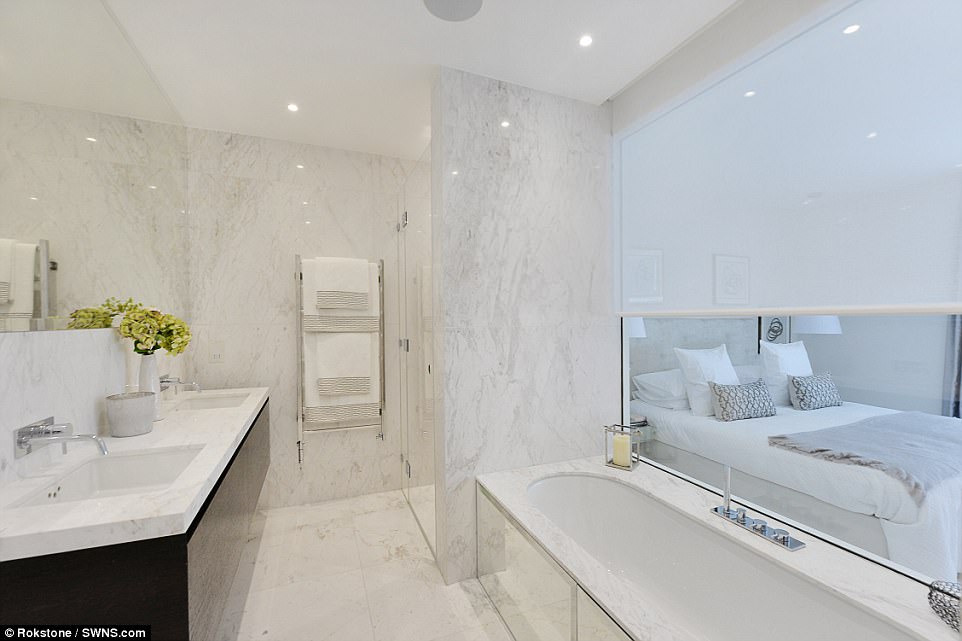 The luxurious bedroom is visible from inside the bathroom, with a screen to pull down for privacy 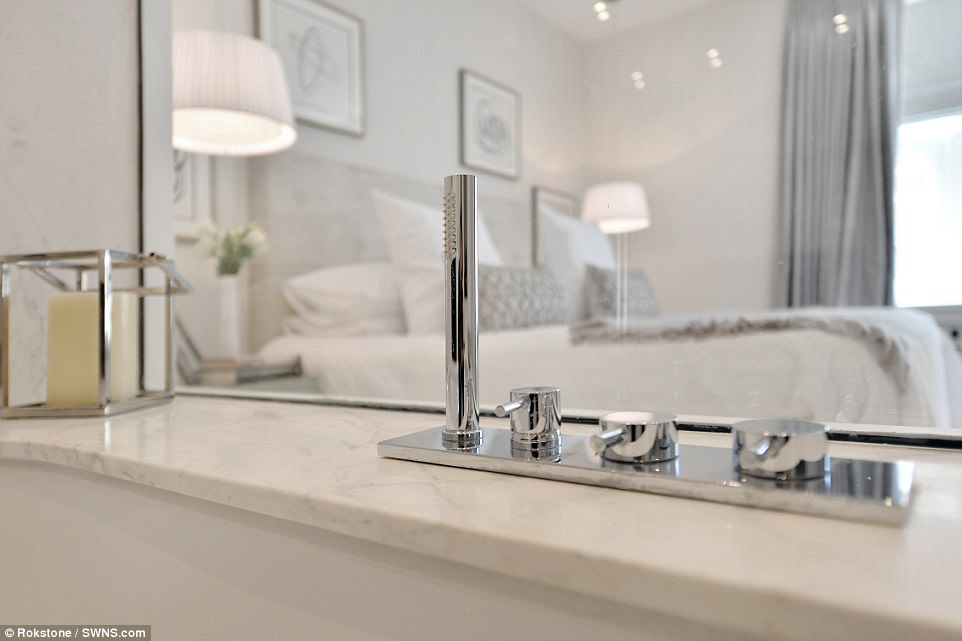 Rokstone said buyers from the Middle East, Asia and Africa, are the ‘only game in town’ when it comes to ultra-prime London properties

‘They want a great address and they only want newly built or newly refurbished homes. For a deal to progress smoothly wealthy buyers want hotel-style homes that are interior designed and dressed, so that buyers can move in immediately without any hassle or the need to find furniture or accessories. Undressed, tired or shabby property just won’t sell in the current market.’

Rokstone – which specialises in ultra-prime deals – highlighted that the luxury homes market in central London for properties priced above £5 million – and especially above £10 million = is currently dominated by Asian and Middle Eastern and African clients. This ‘troika’ of wealthy buyers is currently ‘the only game in town’, Ms Fatemi said.

Ms Fatemi observed that demand for London homes priced above £5 million among buyers in the UK or continental Europe was ‘extremely weak’. 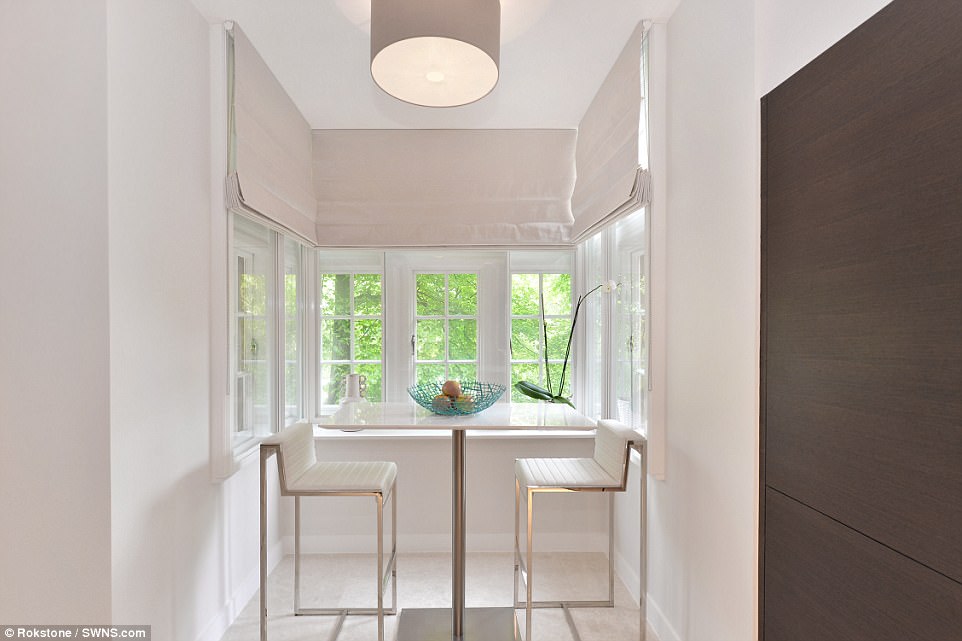 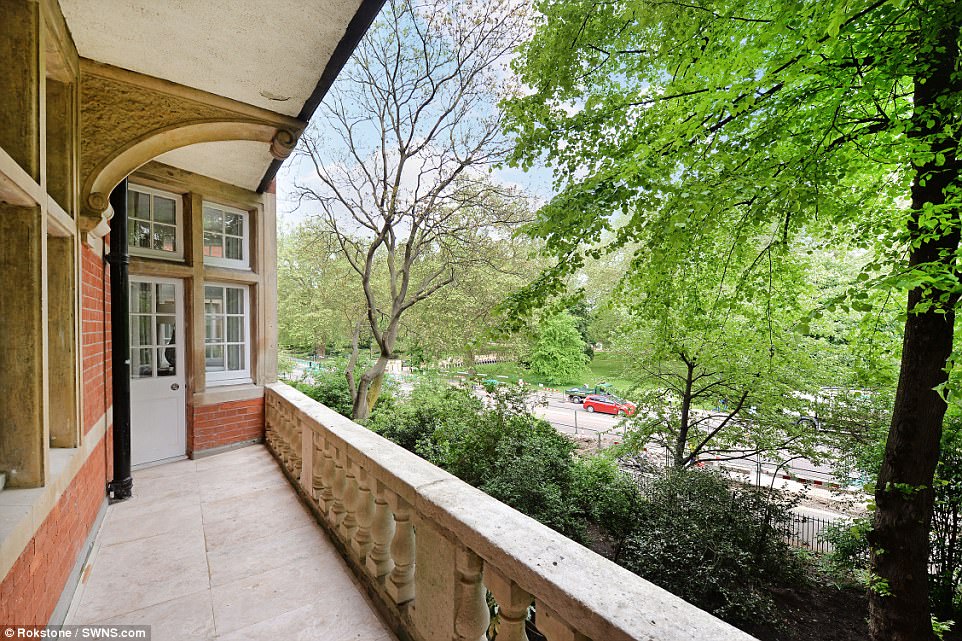 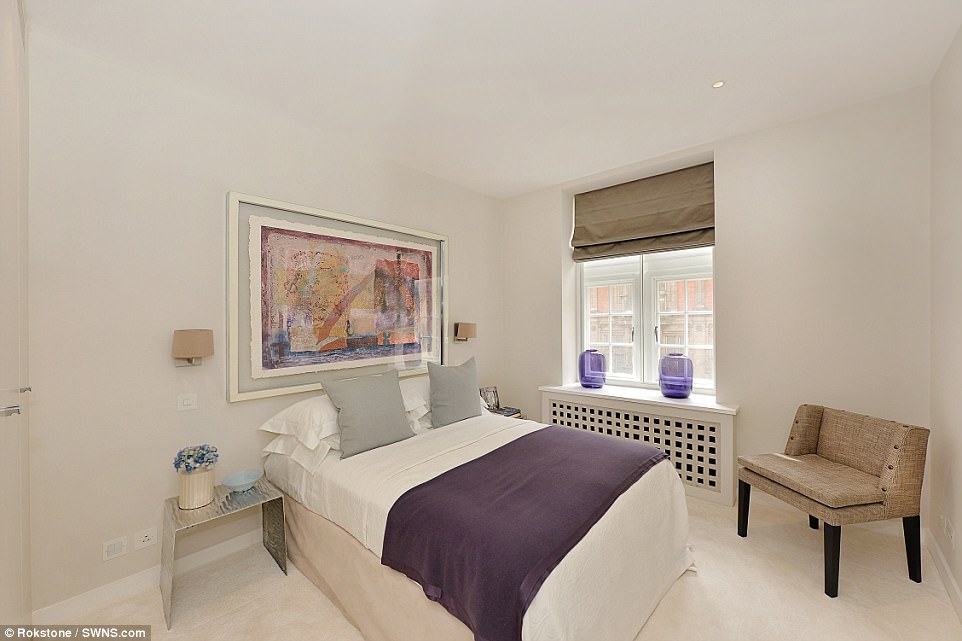 One of four bedrooms inside the Parkside flat, which spans 2,400sq ft in the very heart of central London 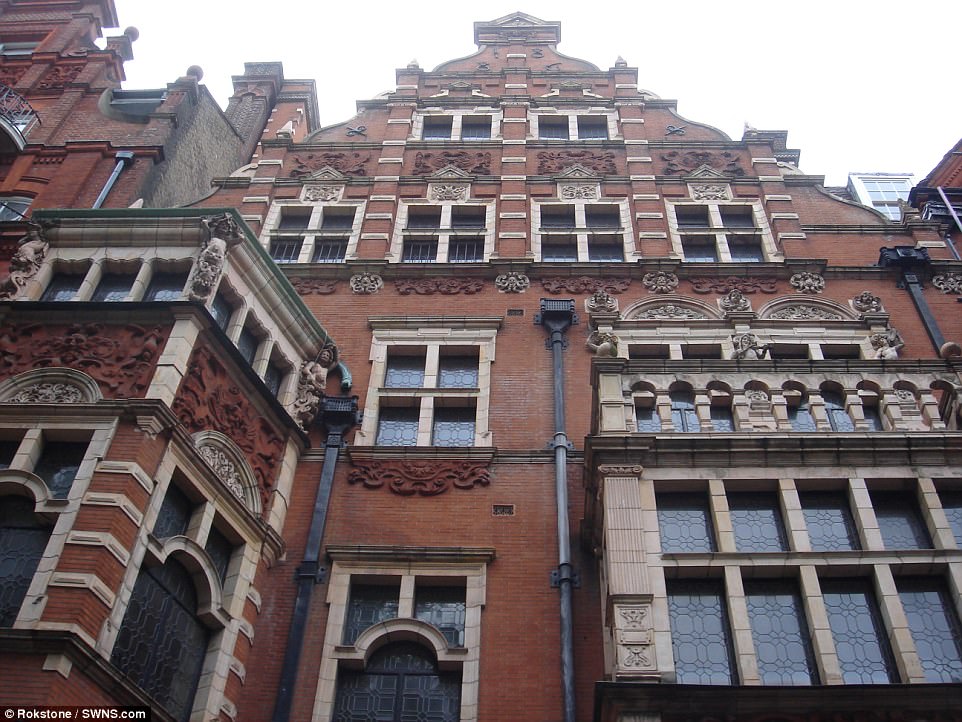 Main residence: The £17million flat on Cadogan Square that will act as the family’s main London base