On a knife’s edge: Huge waves hit one of Sydney’s most popular beaches

Severe weather and huge waves are threatening dozens of beachfront homes in Sydney and has halted work on a partially constructed $25million seawall designed to protect them.

Intense storms in June 2016 caused severe erosion at Narabeen-Collaroy beach where up to 50 metres of beachfront was lost and a number of houses damaged with pools, decks and gardens sinking into the waves.

Houses were left teetering precariously on the edge of the beachfront eaten away by massive waves and residents were forced into emergency accommodation.

More than three years of negotiations between about 255 residents and the government followed to get the seawall built along 3km of coast described as one of the jewels of Sydney’s Northern Beaches – with construction finally beginning this year.

Heavy rain is currently soaking NSW and conditions are set to worsen, with wild weather lashing the mid north coast which is moving to the Hunter, Sydney and Illawarra by the weekend. 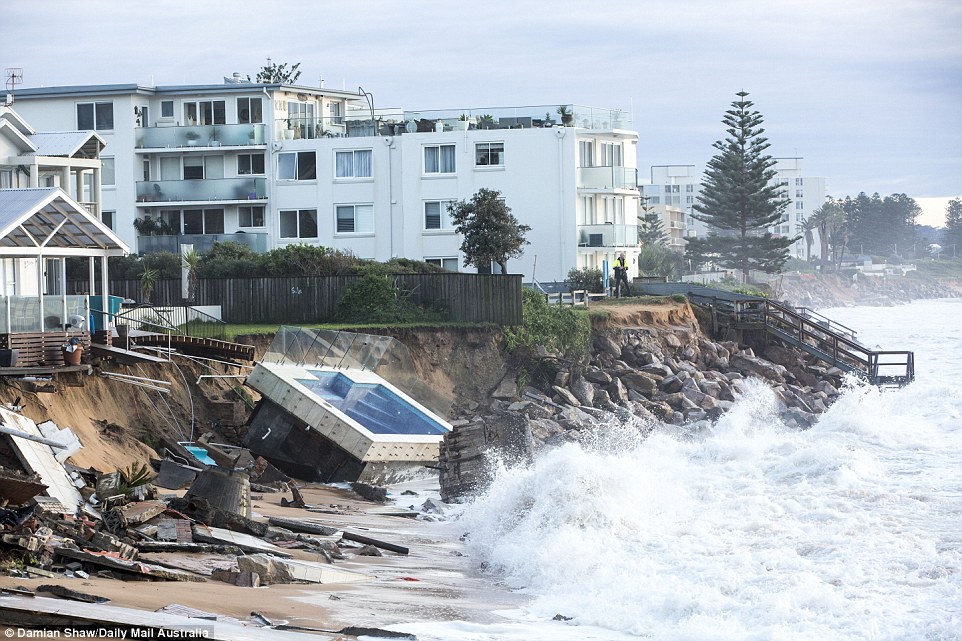 In 2016 a number of homes came dangerously close to sinking into the ocean (pictured) as wild weather lashed the coast at Collaroy beach. The houses can be seen precariously balancing over the eroded beachfront 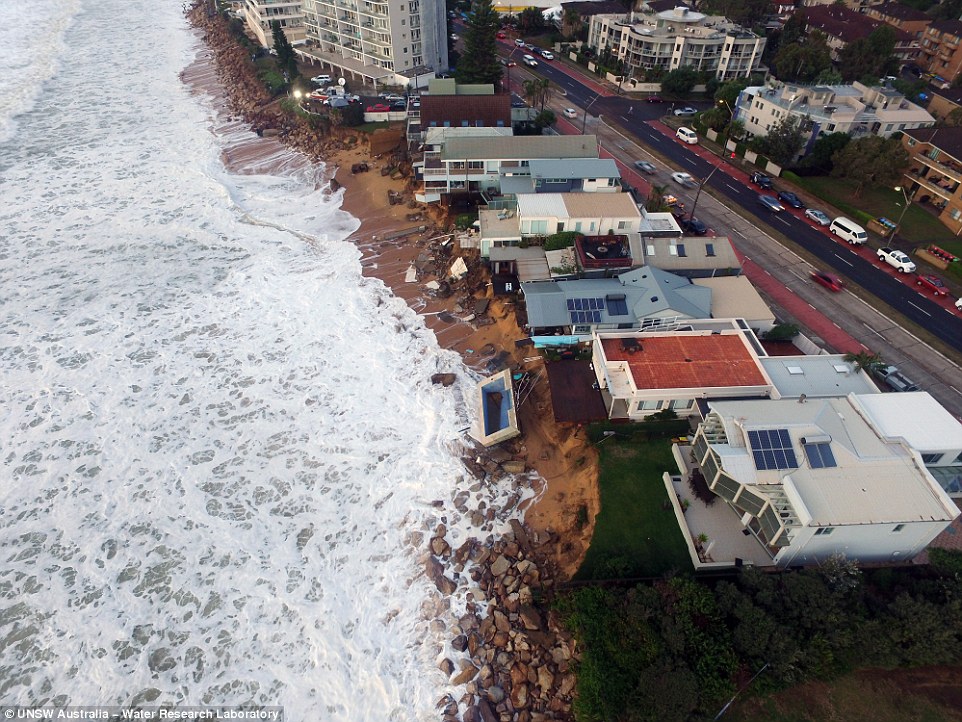 Sydneysiders have been warned of ‘dangerously wet conditions’ and potential flooding with the Hunter and Illawarra also issued warnings.

The Bureau of Meteorology says the focus on Thursday is for the mid north coast, where persistent and heavy rain is increasing the chance of flooding and flash flooding.

The weather bureau’s Agata Imielska said the low pressure system was expected to move south to the Hunter, Sydney, and Illawarra regions on Friday and Saturday.

She says wet soils, combined with heavier falls, could result in dangerous conditions and flooding on the mid north coast. 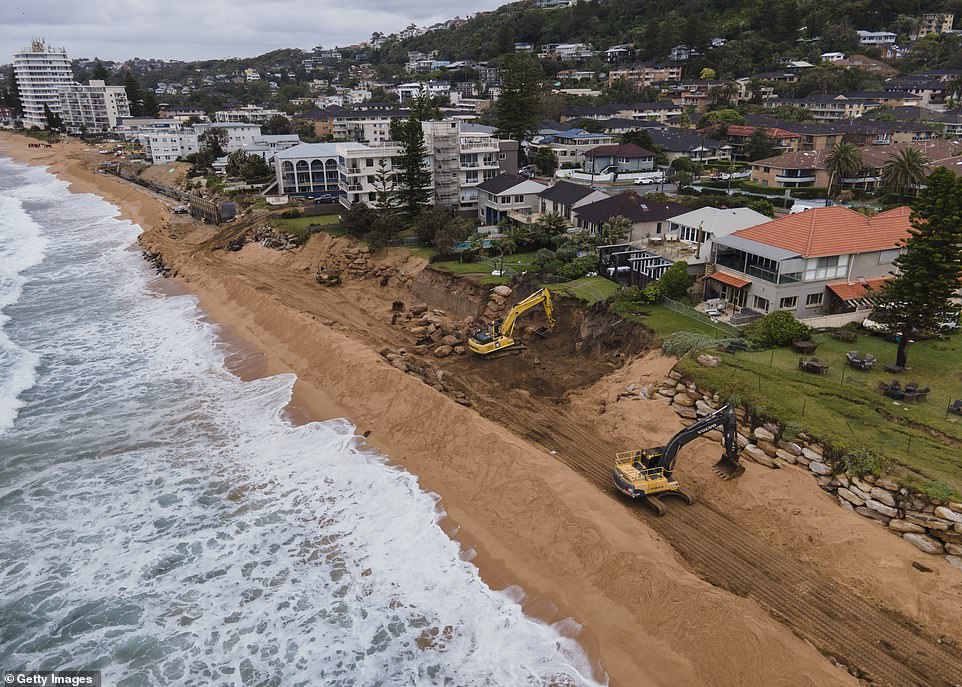 Residents have battled for nearly a decade to get the seawall built and now finally under construction the areas looks set to be flooded before work can be completed (pictured: the seawall construction on Thursday) 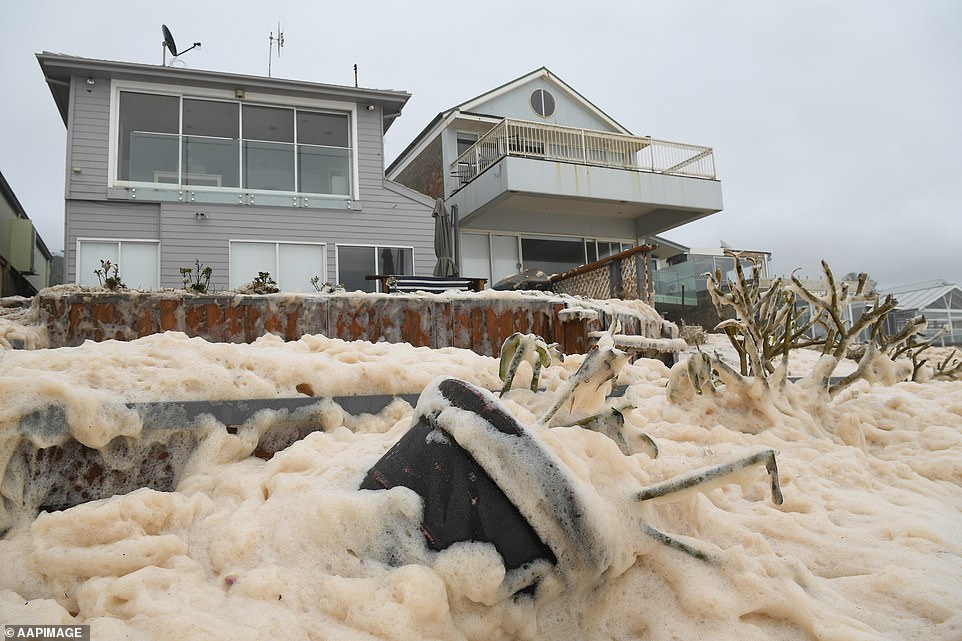 Collaroy beach is known as an erosion hotspot with king tides regularly hitting the area. In February this year (pictured) sea foam washed into beachfront yards after heavy rain 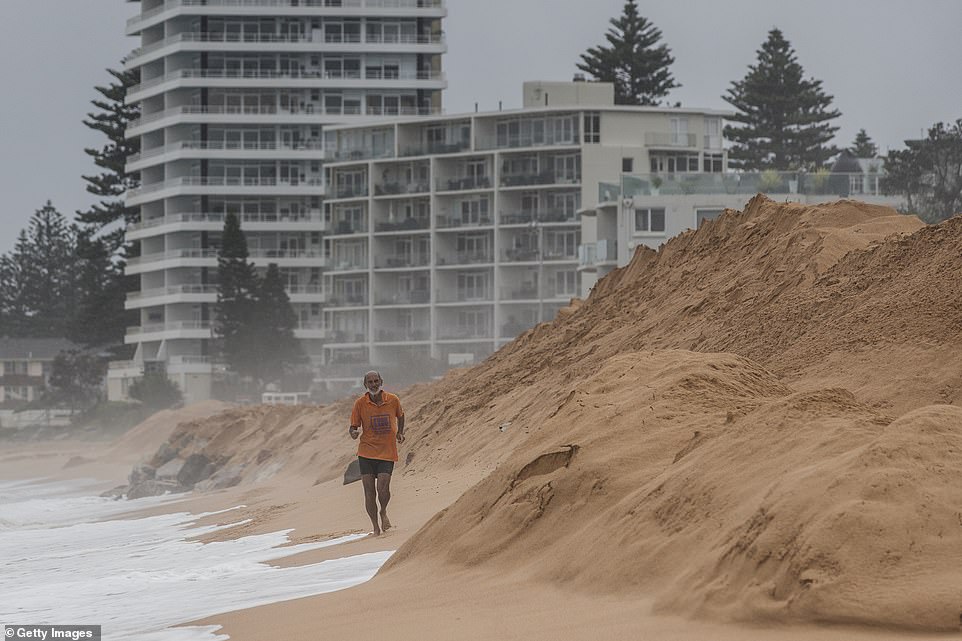 A man runs along Collaroy beach on Thursday (pictured). The seawall, jointly funded by the private and public sector at a cost of $25 million, is intended to protect houses built on a stretch of beach that has been heavily impacted by storms and rising sea levels. Weather forecasters predict dangerous conditions with potential flash flooding as rain hits the NSW coast

While the bureau said the system was not expected to develop into an east coast low, it was still a ‘significant system’.

Forecasters say more than 100mm of rain is expected to fall in a short period of time in some places.

‘We’ve got heavy rainfall, we’ve got catchments which are very wet and … we’re very concerned about the potential for flooding along the coastal rivers from the mid north coast down to Sydney,’ said Justin Robinson, the bureau’s flood operations manager.

‘We’ve got widespread flooding, the focus today is on the mid north coast and we expect that rainfall to move south today and into the weekend and then we’ll see that flooding develop in the Hunter and then further into the areas around Sydney.’

There are several flood warnings in place on the state’s rivers from the Orara River in the north, with the potential for minor flooding expected on the Georges, Nepean and Hawkesbury rivers in the Sydney region.

‘As we move into the weekend there’s a good potential for localised flash flooding across the Sydney metro area, and further south to the Illawarra,’ Mr Robinson said.

The State Emergency Service has warned motorists to avoid unnecessary travel this weekend.

The Bureau Of Meteorology has issued a severe weather warning for heavy rainfall for the mid north coast from Thursday. 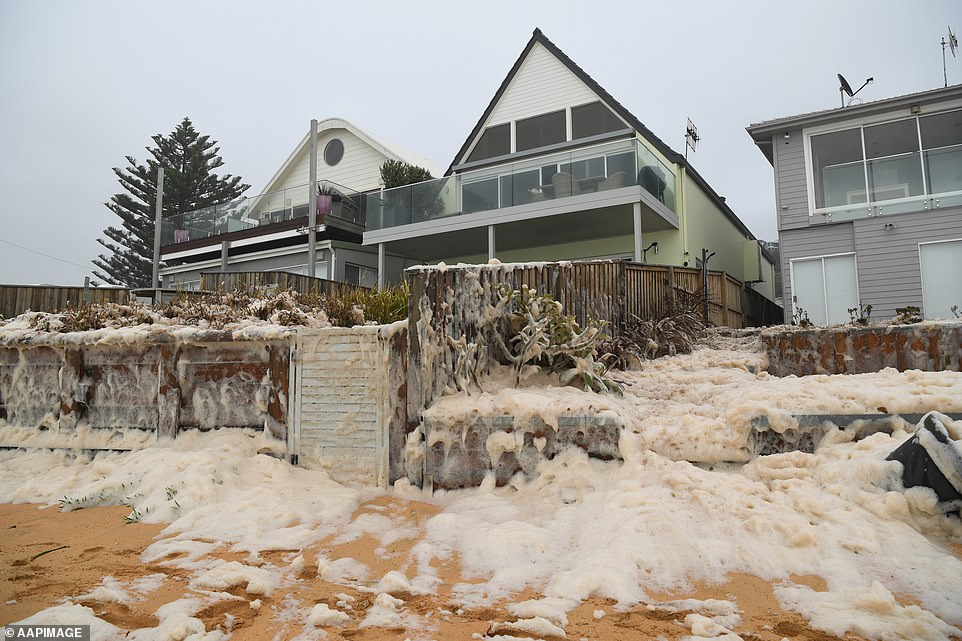 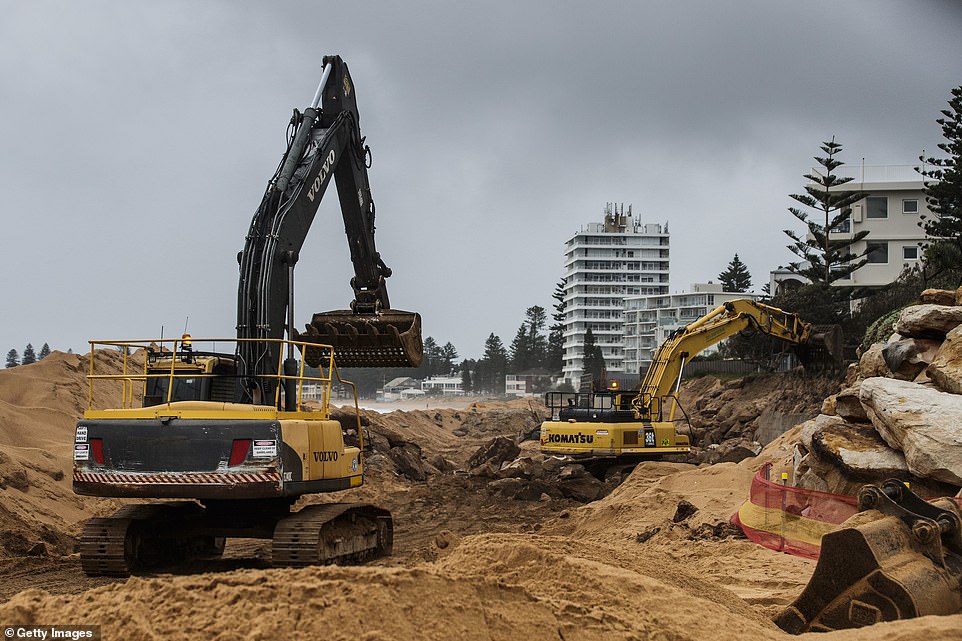 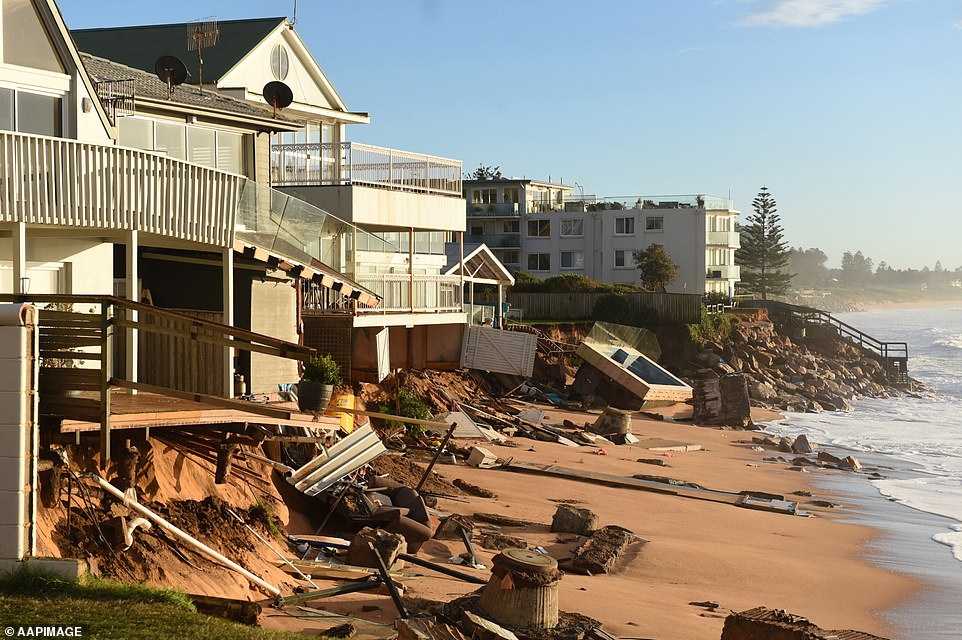 The aftermath of the 2016 flooding at Collaroy beach showing luxury homes with their yards, decks, pools and gardens having collapsed into the sea (pictured) mere inches away from the houses themselves

The inland of NSW is expected to get its share of the rain when a separate system moves in next week.

A severe weather warning is in place for the New South Wales mid-north coast where as much as 300mm is expected to fall in the next three days.

Meteorologists have warned those living on the east coast to expect ‘an absolute deluge’ as the weather system moves gradually southwards towards the Harbour City.

‘There is some uncertainty about where the heaviest falls will be this weekend,’ Sky News Weather meteorologist Alison Osborne said.

‘There is a risk of that flooding reaching Sydney and the rain spreading into northern and eastern parts of Victoria.’ 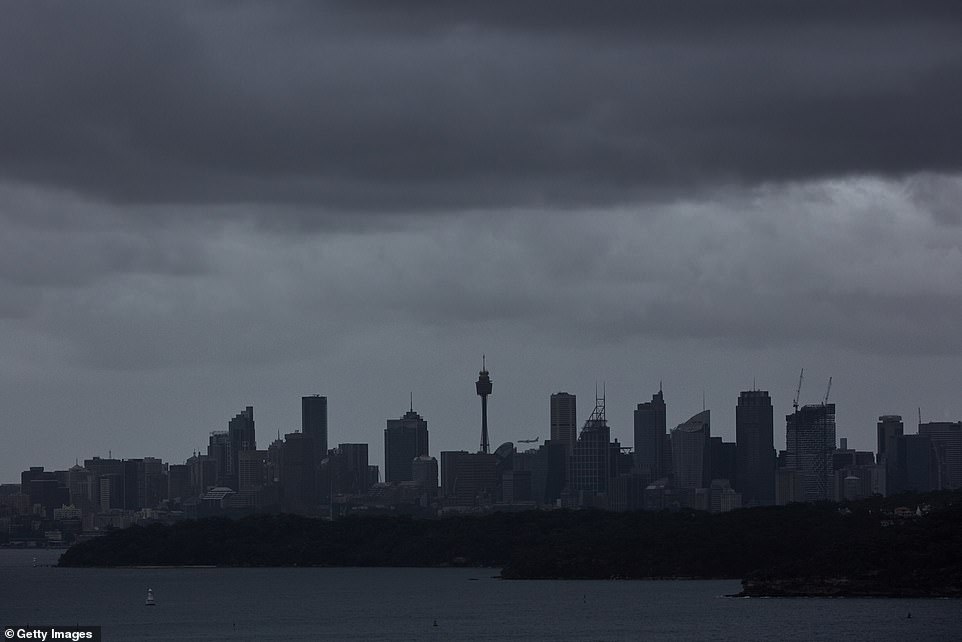 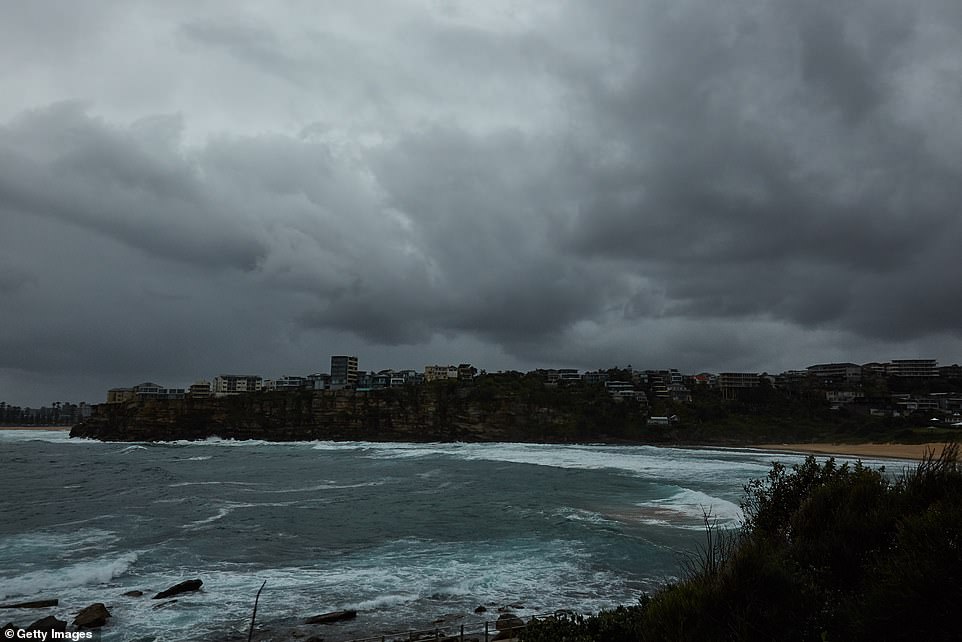 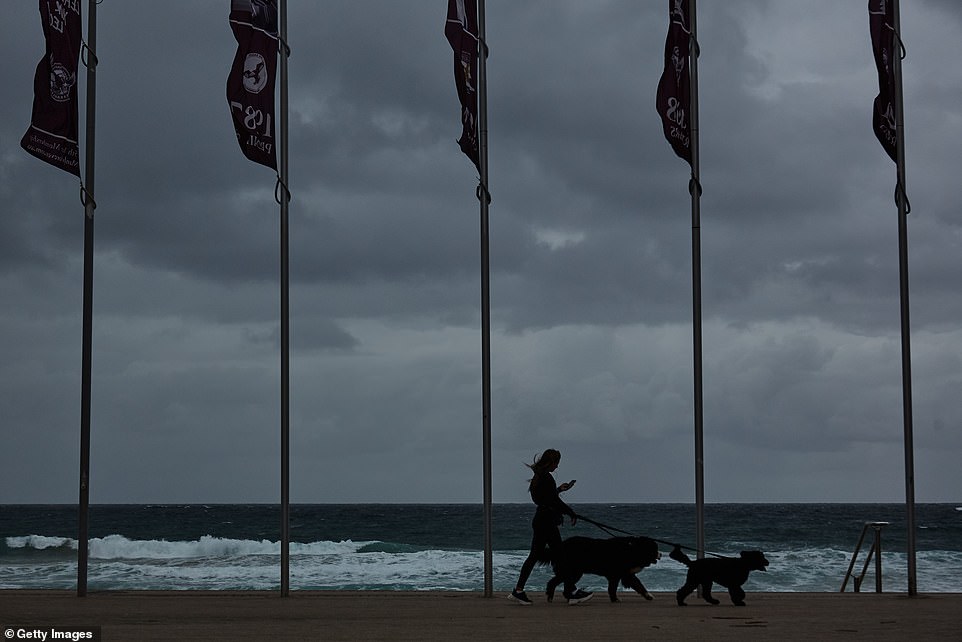 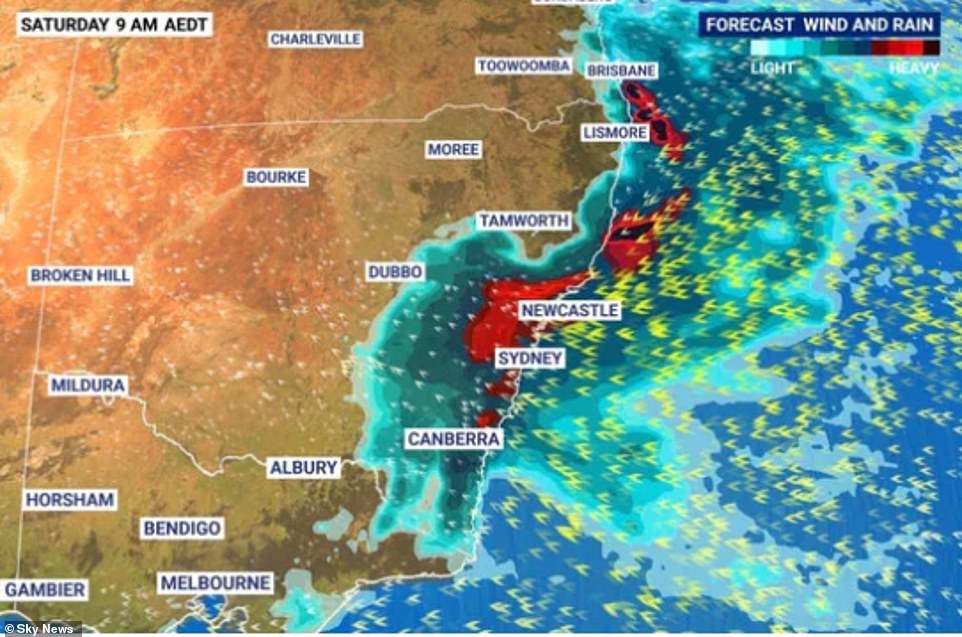 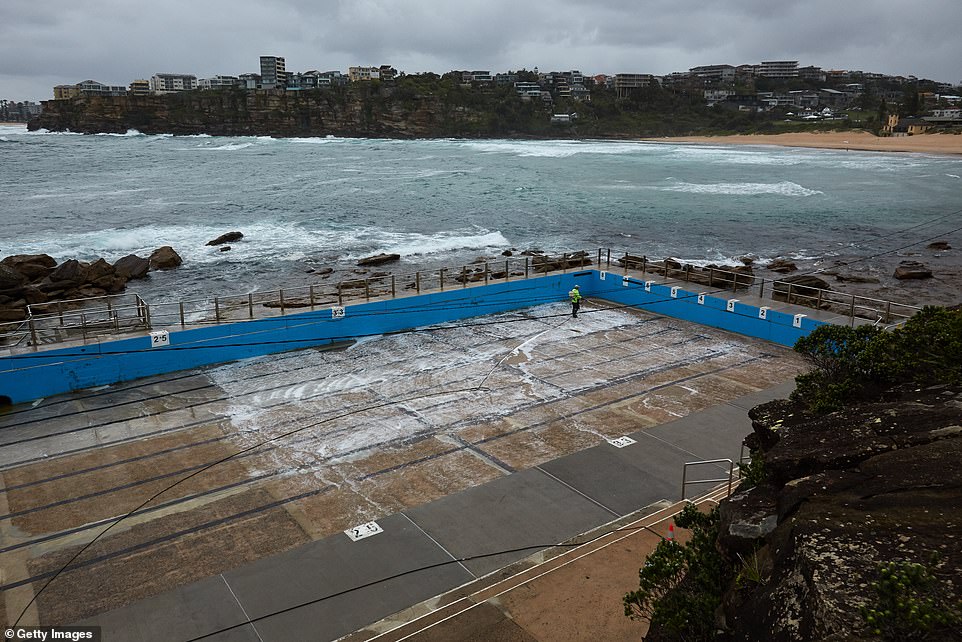 Sydney could see one of the heaviest days of rainfall periods in recent years, with some suburbs predicted to experience north of 100mm 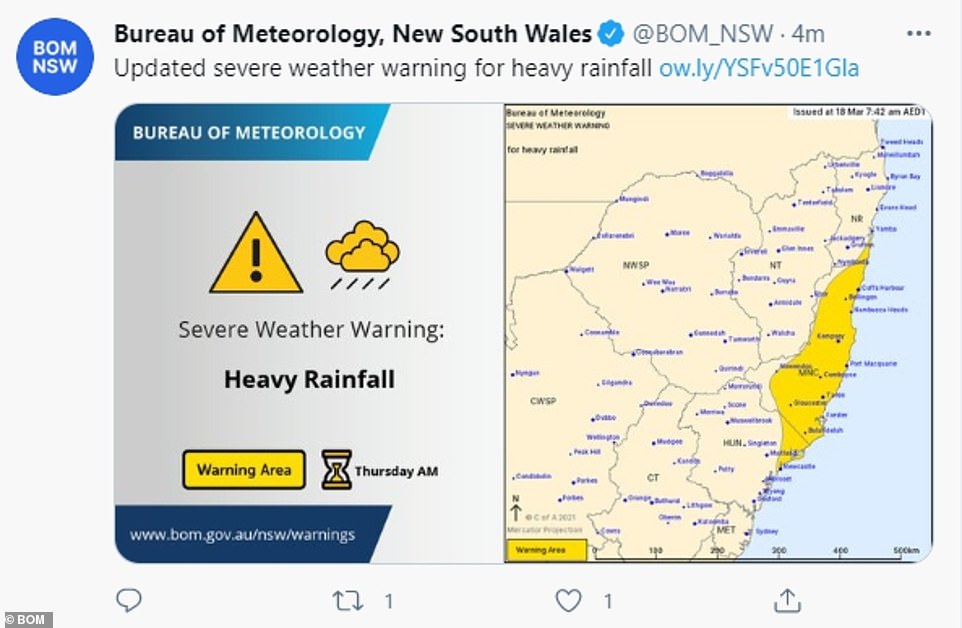 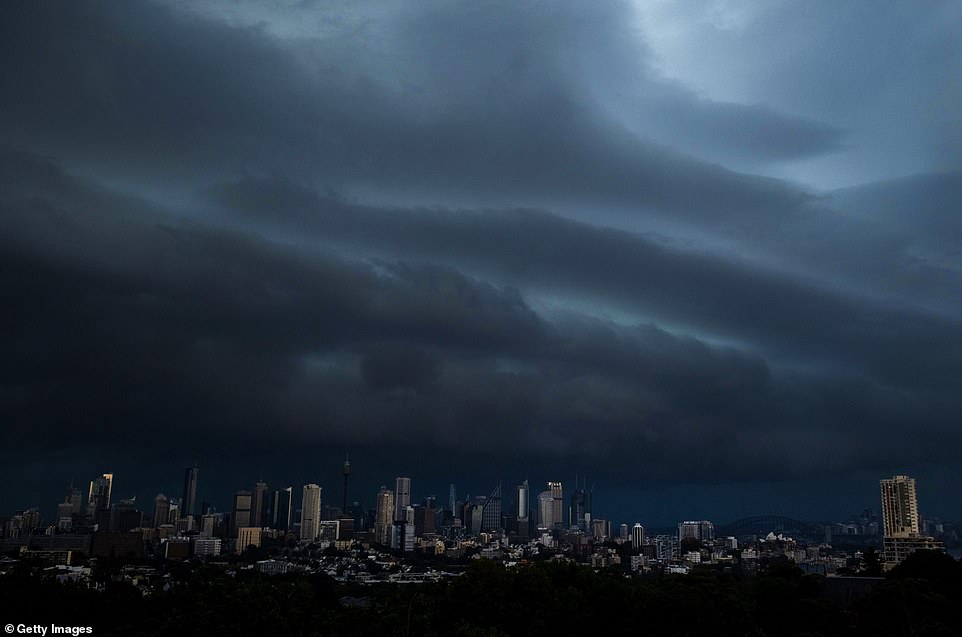 Large parts of Australia’s eastern seaboard are set to cop three months worth of rain in just a few days as a huge rain band hovers over the coastline. Pictured are storm clouds over Sydney in January 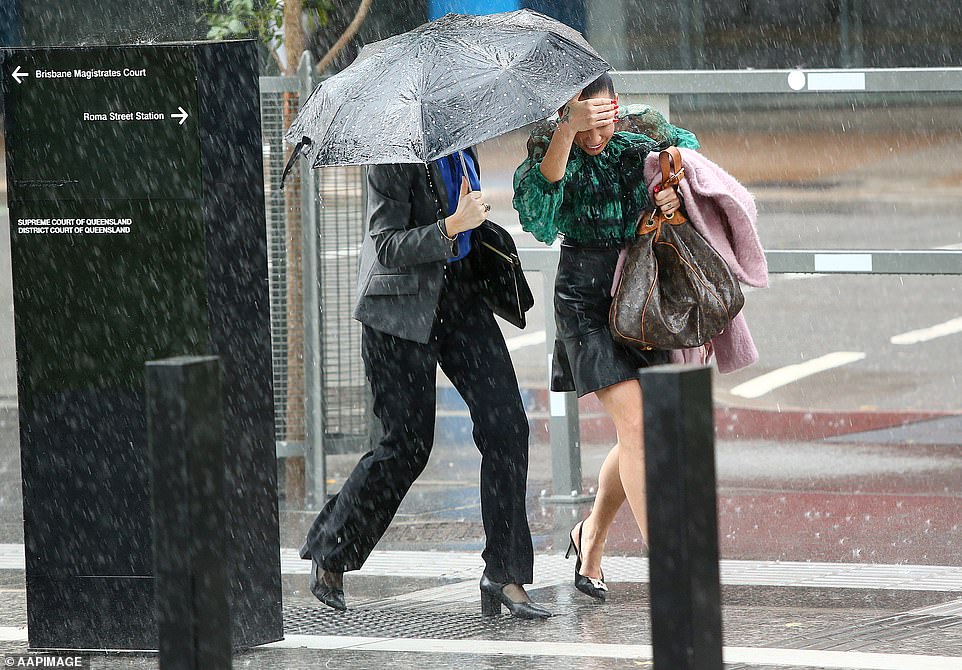 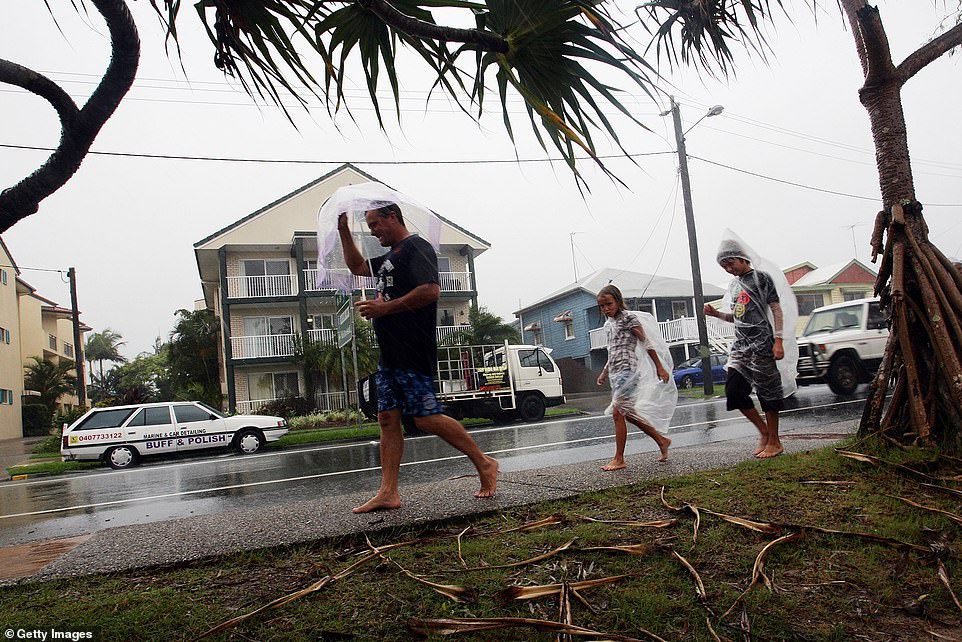 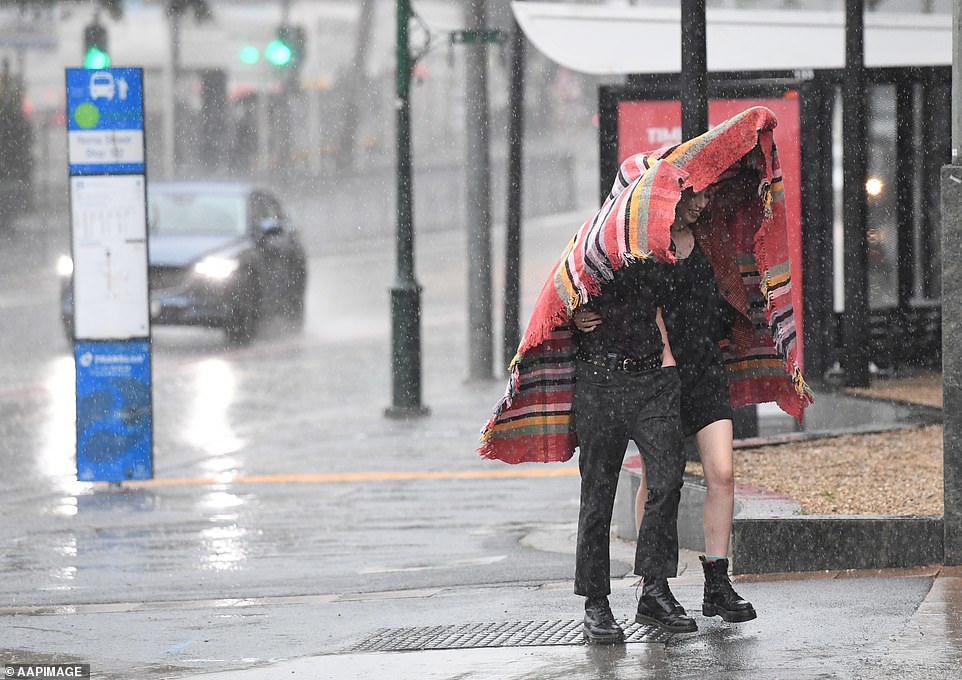 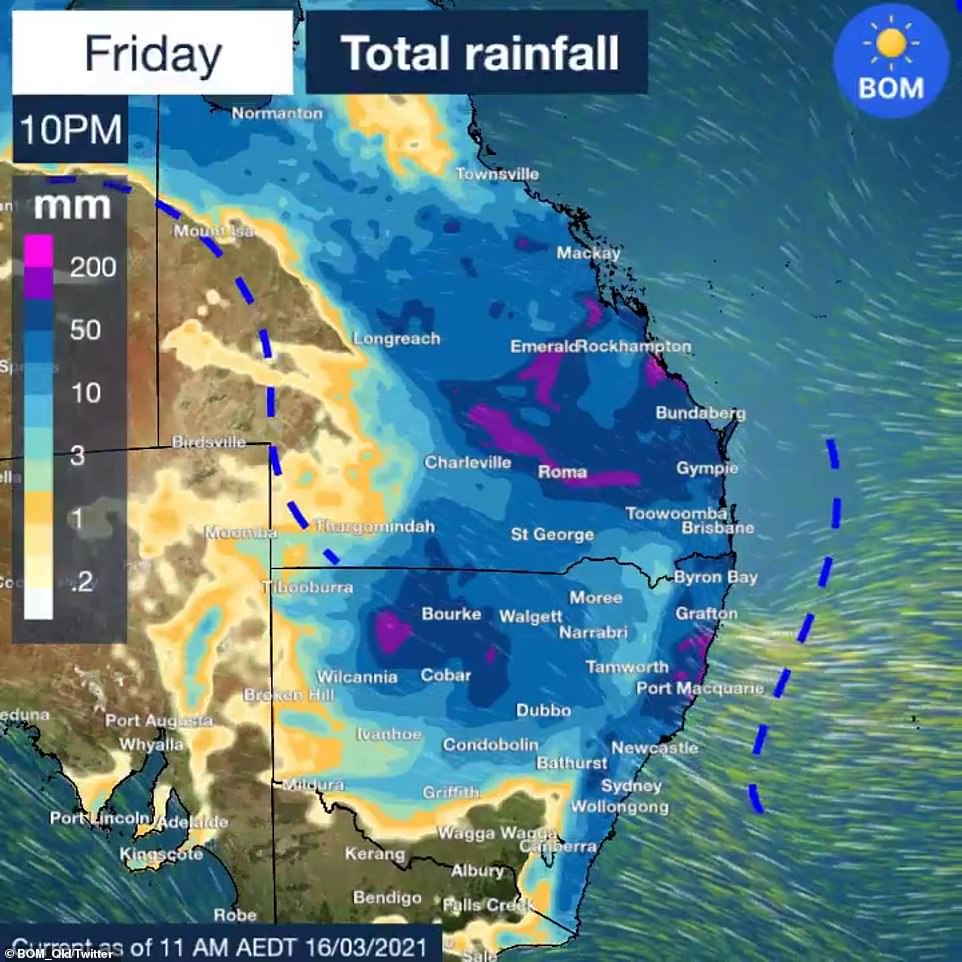